The Yellow Turban Rebellion is the first Warlord Pack for Total War: THREE KINGDOMS, and is available for purchase here.

But who were the Yellow Turbans, and what went into designing them for inclusion in Total War: THREE KINGDOMS?

The Yellow Turbans were instrumental in the fall of the Han Dynasty and the start of the Three Kingdoms period.

China was going through a long period of droughts, floods, failed crops, and other natural disasters. Not only were the people starving – they were oppressed by an increasingly corrupt and tyrannical regime, with the Emperor being fought over by the court eunuchs and other nobles. The Mandate of Heaven – the divine right to rule – was the source of the Emperor’s legitimacy. But natural disasters were often interpreted as a sign of Heaven’s displeasure with the current Emperor.

The founder of the Yellow Turban movement, Zhang Jue, was a healer who had great respect among the people. He and his fellow healers would help the sick when they could not afford to pay for their treatments. Using this network of healers and patients, Zhang Jue managed to gain influence throughout China. He used this to spread a prophecy confirming that Heaven’s mandate was lost, that the sky would turn yellow, and that the people would enjoy a period of peace and prosperity afterwards – he instructed them to be ready for an uprising.

However, Zhang Jue was betrayed before his rebellion could begin. The Emperor was warned ahead of time, and Zhang Jue’s sympathizers in the capital were executed. Left with no other choice, Zhang Jue spread the word that the uprising was to start immediately. Throughout China, rebellious peasants slew their masters and seized control of palaces, garrisons, and even whole cities.

In response, the Emperor had no choice but to empower the warlords and give them control over large amounts of troops to quell the rebellion. While successful and Zhang Jue was eventually defeated and lay dying of illness, the rulers did not change their ways and corruption remained rife, making the rebellion drag on for over two decades and new uprisings springing up throughout China. The warlords had no intention of handing their newly acquired power and autonomy back to the weakened Emperor. Eventually both the Emperor and the eunuchs controlling him perished, leading to Emperor Shao taking the throne. In the resulting turmoil, Dong Zhuo marched on the capital and seized the Emperor.

Dong Zhuo proved to be a cruel tyrant, poisoning Emperor Shao as well as his other opponents and making the newly installed Emperor Xian his puppet. This led to further uprisings and ruthless suppression from the regime. Other warlords grew ambitious as well, starting to act more and more autonomously and even fighting among themselves, leading to further suffering for the people.

Our game starts in 190 CE, with the Yellow Turban rebellion having already been underway for six years. The founder of the rebellion has perished, but defeat is far from certain. Now, new leaders have risen up to bear the torch and attempt to rekindle the movement. Will you be able to change the course of history by uniting China under a yellow sky, earning back the Mandate of Heaven, and bringing about the Era of Great Peace? 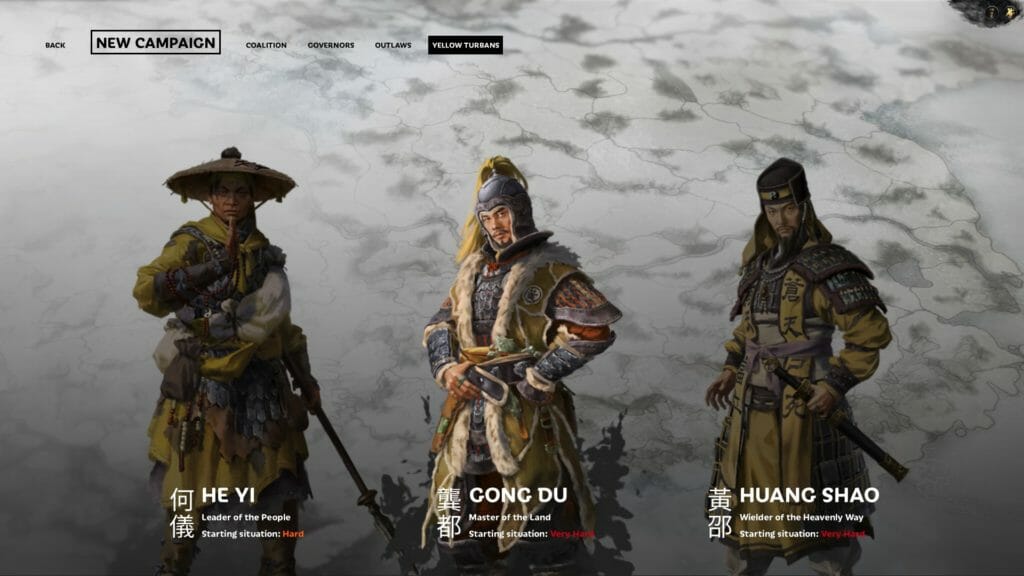 Why the Yellow Turbans?

The Yellow Turbans were the catalyst that set the events of the Three Kingdoms in motion. They are very different from the established, more authoritarian factions. Their philosophy is based on various Taoist principles, and we made this spiritual background pervade most of the game’s mechanics.

For example, the Three Treasures – which are the primary Taoist virtues of Compassion, Frugality, and Humility – and the three domains of Land, People, and Heaven are seen everywhere, from the background of the new playable heroes and their individual skill trees to the branches of the reform tree.

As the Yellow Turbans, you play the underdog. The rebellion is nearly extinguished, but three small Yellow Turban enclaves remain. As a player, you’ll be fighting an uphill battle to regain momentum, capture new territory, and deal with all the hostile warlords that want to claim your territory for themselves.

All in all, the Yellow Turbans are so different from regular factions that they were a DLC perfect choice, providing many different mechanics that serve to make their gameplay experience unique. 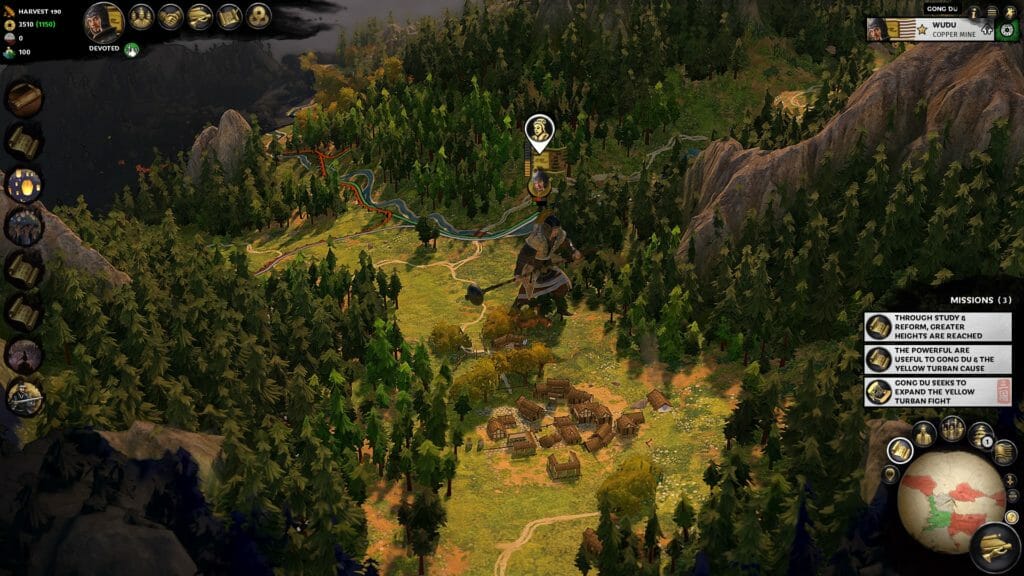 How did you design the Yellow Turban units?

While many of the Yellow Turbans warriors were drawn from the masses of angry peasants, outcasts, and brigands, the movement gained traction throughout all layers of society – all the way up to the imperial court in Luoyang. When designing the Yellow Turban unit roster, we looked at the various backgrounds of the people joining the rebellion and wondered how they would equip themselves when preparing for conflict.

Each unit in the Yellow Turban roster has such a distinct background – lowly peasants, wise monks, learned scholars, strong manual labourers, opportunistic looters, daring vigilantes, and even former noblemen – and we extrapolated from there.

For example, waterfowl hunting from horseback was a thing during the era, so we created Horseback Huntsmen as a light skirmishing and harassment unit. History also tells us about palace guards sympathizing with the Yellow Turbans and slaying their own tyrannical masters. Such former guardsmen would still have their ornate weapons and armour and so use those in battle. Wandering merchants would potentially storm and loot an armoury at night, resulting in the People’s Warband unit of lightly armoured troops wielding two sabres. 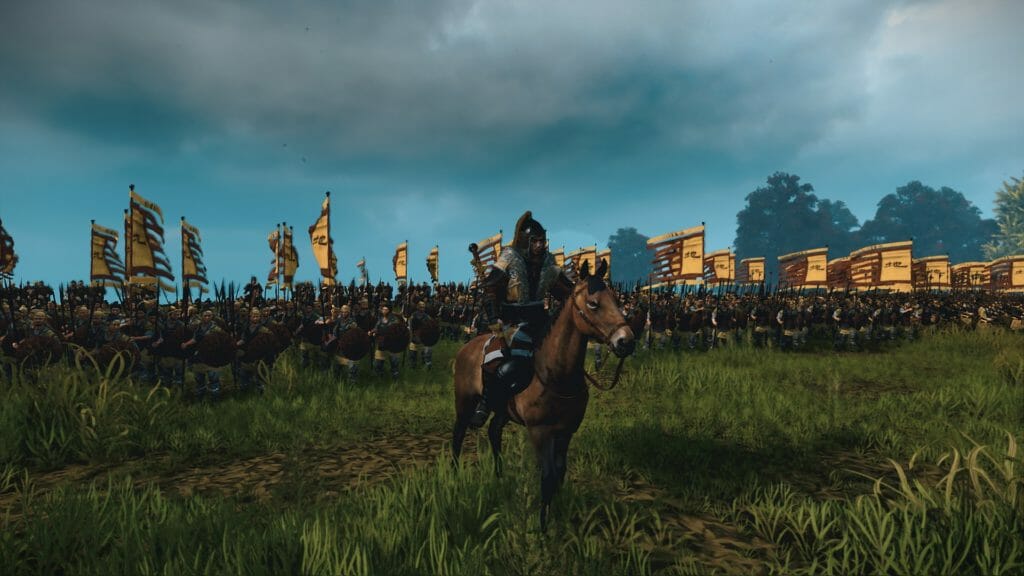 Could you tell us a bit more about the three unique character classes?

The Yellow Turbans have access to three unique character classes: the Scholar, the Healer, and the Veteran.

The Healer was the most obvious class to include as the Zhang brothers, who founded the rebellion, were healers – we decided to give them a support role. While lightly armoured like a Strategist, they can equip staff and spear weapons, as well as hold their own a bit better than you’d expect.

Scholars are those who study scripture, and might be practitioners of martial arts as developing the physical arts was viewed as important as knowledge of esoteric matters. Scholars are well versed in the use of dual weapons, and while only capable of wearing medium armour they are very skilled at dodging incoming blows.

Many former soldiers and guards also joined the rebellion, and their officers would come to be the third Yellow Turban class: the Veteran. Veterans are heavily armoured and skilled in the use of various pole weapons, including the devastating ball mace.

Yellow Turban faction progression is based on gaining wisdom by researching reforms and unlocking skills on heroes. We really wanted to make the progression system reflect the struggle to achieve a state of Great Peace and reclaim the Mandate of Heaven – as well as finally being able to find a legitimate, virtuous, and rightful Emperor of China. For this reason, the Yellow Turbans’ progression is measured in Enlightenment points.

When designing the reforms, we took inspiration from the text of the Tao Te Ching and its teachings. At the same time, the legend of the three books given to Zhang Jue – the Essential Art of Great Peace, through which humanity could supposedly be redeemed – is a key moment for the Yellow Turban rebellion, and it inspired the visual appearance of three scrolls: one for the Land, one for the People, and one for Heaven.

The Yellow Turban reforms are intrinsically linked to their factions’ progression. Not only are completed reforms a major source of Enlightenment, but the reforms themselves are also locked behind faction rank. As your rank increases, new sections of the reform scrolls become available. You may choose reforms freely from any of the available sections, and unlike the reform tree of the regular factions there are no dependencies. 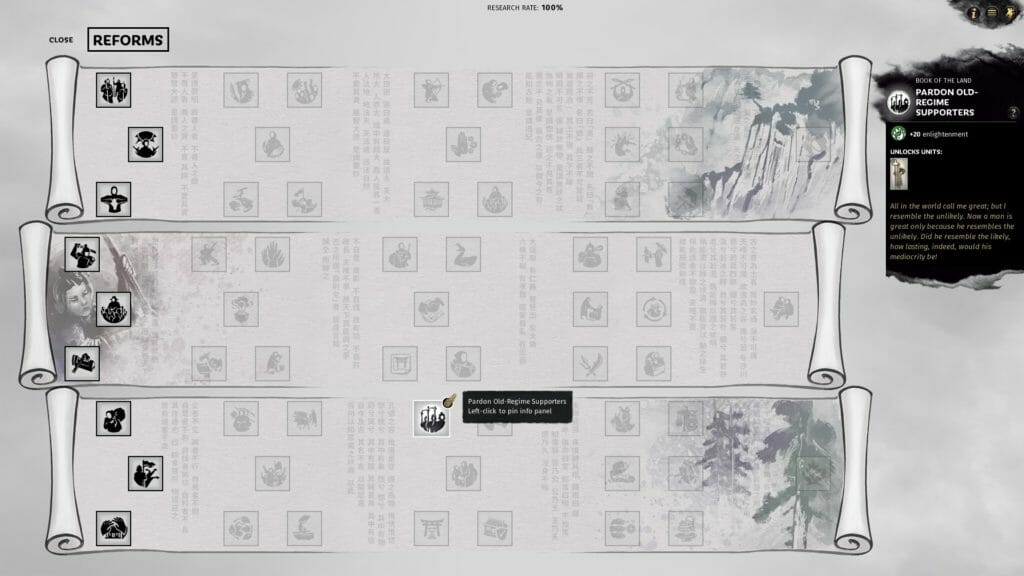 Which is your favourite Yellow Turban faction?

Personally, I like playing as Huang Shao most. We spent a lot of time designing Huang Shao’s appearance and making sure he looks unique, wearing a fancy scholar hat and ribbons adorned with the Yellow Turban prophetic slogan.

He’s a mix of wise scholar and martial artist, and has an interesting ability that – among other things – replenishes the fatigue of units around him, making them able to outlast their enemies. He can also increase the effectiveness of archers around him, which combines well with the Archery Masters unit that he unlocks early on. Last but not least, he has an ability that allows him to rapidly move nearby units and hit the enemy with a devastating surprise attack.

When playing as Huang Shao, I usually expand north-east and attempt to capture as much of the peninsula as possible. I also make sure to go after Lui Bei’s army. While it is a very hard fight, the payoff is great if you manage to capture Zhang Fei or Guan Yu and loot their legendary weapons. With either of these weapons equipped, Pei Yuanshao – Huang Shao’s sidekick Veteran hero –  becomes nearly unstoppable. He has great skills to deal with enemy characters as well as elite, units and is extremely resilient. 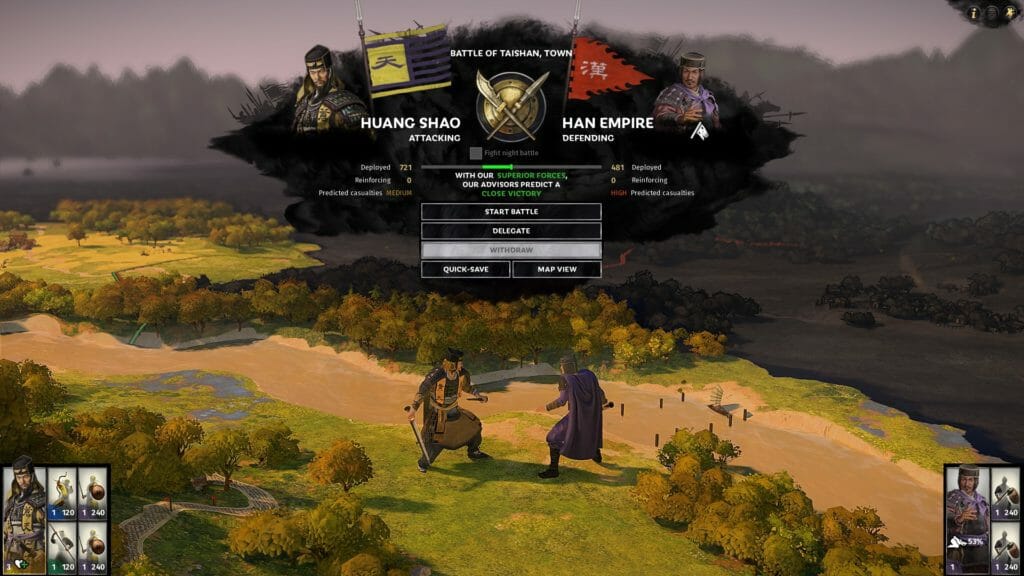 Make sure to pick up Total War: THREE KINGDOMS and the Yellow Turban Rebellion Warlord Pack!

Balancing any game is no mean feat – and Total War: THREE KINGDOMS ...

Welcome to our first Total War: THREE KINGDOMS dev diary! In this s...