Our next warlord is Gong Du, Master of the Land

Gong Du, Master of the Land 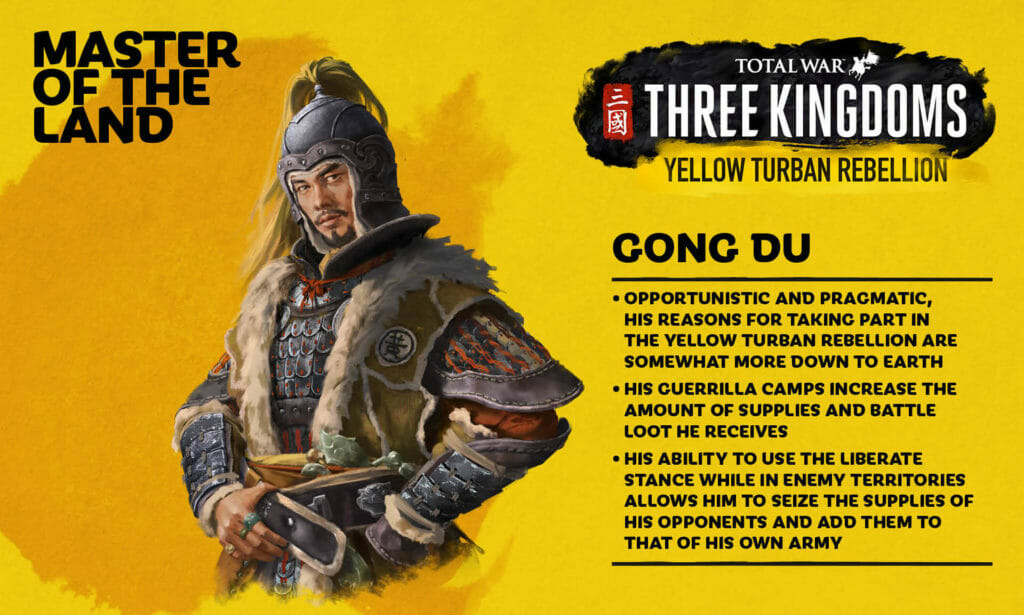 Opportunistic and pragmatic, Gong Du’s reasons for taking part in the Yellow Turban Rebellion are somewhat more down to earth.

Not really driven by the religious reasons that made many of his peers take up arms, Gong Du is instead focused on redistributing the wealth of the corrupt elite to more deserving individuals as well as eliminating those who get in the way of him establishing a new order that places talented individuals like himself firmly at the top.

His guerrilla camps increase the amount of supplies and battle loot he receives, and Gong Du’s ability to use the Liberate stance while in enemy territories allows him to seize the supplies of his opponents and add them to that of his own army. This also means his armies can operate further way from his territories.

Gong Du starts his campaign with access to Guardians of the Land, heavily armoured polearm-wielding former bodyguards of nobles who slew their masters in order to join the Yellow Turbans’ cause. 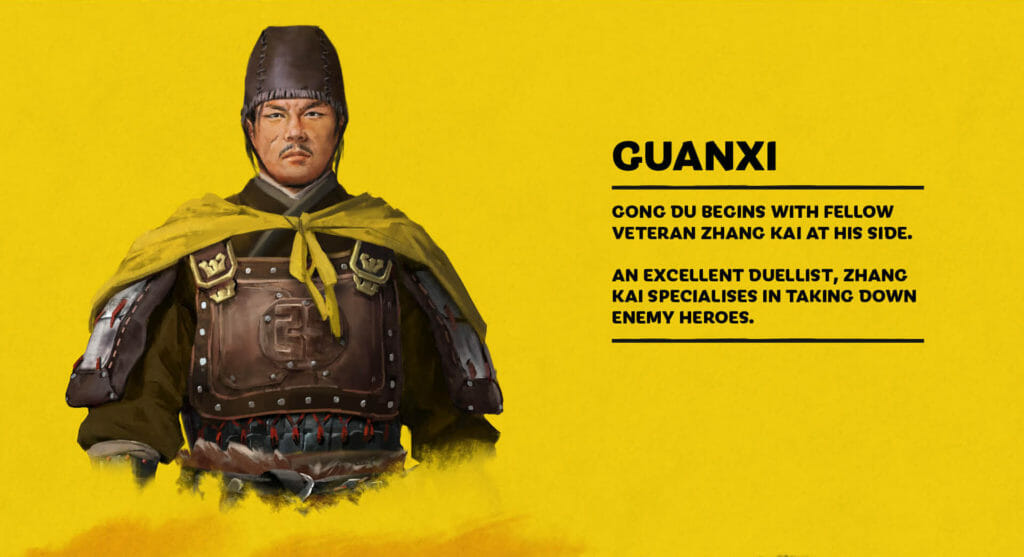 Gong Du begins with fellow veteran Zhang Kai at his side.

Gong Du’s early game is a tense one. He immediately clashes with Ma Teng, and must manoeuvre extra carefully in order to deal with this looming threat. Zhang Lu is also to the east, and is far from a pushover either.

From his starting position Gong Du can either head south and hide until he is strong enough to be a force to be reckoned with or expand aggressively to the north-west in order to establish a more easily defensible position.

Gong Du can also choose to tempt fate and go east to the attack the capital itself – assuming the tyrant Dong Zhuo is absent, dead, or otherwise engaged.

As Gong Du it is important to see what the warlords surrounding you get up to – most of them are stronger than you initially, so you need to try and anticipate their plans and act accordingly.

As Gong Du only starts out with one small settlement and has a bonus to movement range, it is quite possible to pack up and relocate to a more interesting place on the map. Once a base of operations has been established, Gong Du will want to recruit additional generals and spread out his forces. Because of his special Liberate stance, these can operate far away from Gong Du’s main territory and strike at a moment’s notice if any chances present themselves.

The selection of units available to Gong Du initially have various guerrilla-style missile units, but later on this includes resilient infantry and heavy cavalry. This is rare for Yellow Turbans, but allows Gong Du to soften up the enemy and tire them out before his heavy units move in to mop up the weakened remnants.

What kind of player is Gong Du for?

Gong Du is a no-nonsense, versatile warlord suitable for players who enjoy hit-and-run tactics and mobility.

Gong Du’s bonus to movement range and special Liberate stance allow him to travel great distances and strike far outside his own territory. With many different choices for him to make at the start of his campaign, every playthrough should be a different experience.