Our next warlord is He Yi, Leader of the People

He Yi, Leader of the People 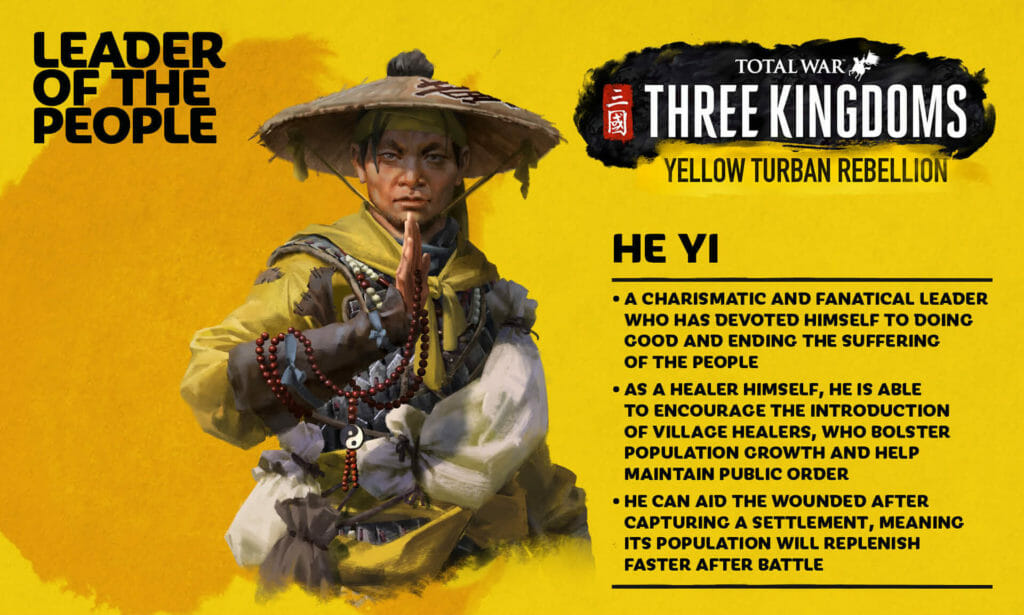 Although not very learned, He Yi is a charismatic and fanatical leader who has devoted himself to doing good and ending the suffering of the people.

Compassionate and courageous, He Yi places the wellbeing of others above all else.

As a healer himself, He Yi is able to encourage the introduction of village healers in his settlements, who bolster population growth and help maintain public order.

He is also able to aid the wounded after capturing a settlement, meaning its population will replenish faster after battle.

He Yi’s starting army includes the Youxia – sword-and-shield-wielding knights errant who specialise in defence. As the campaign progresses, He Yi can also unlock the Arm of the Supreme Peace, who wield great ball mace weapons capable of devastating splash attacks. 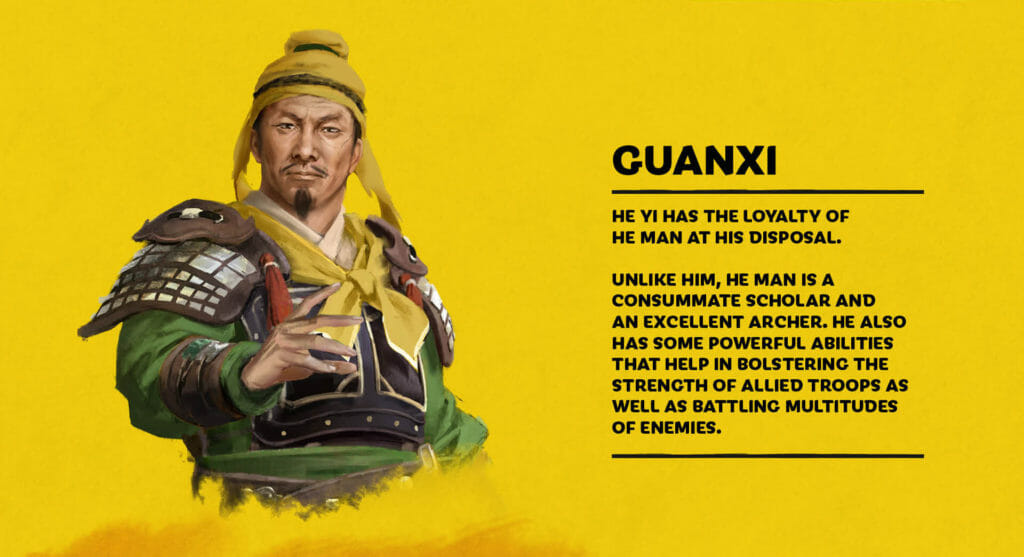 He Yi has the loyalty of He Man at his disposal.

Unlike him, He Man is a consummate scholar and an excellent archer. He also has some powerful abilities that help in bolstering the strength of allied troops as well as battling multitudes of enemies.

He Yi starts surrounded by a lot of powerful enemies – Cao Cao, Yuan Shu, Liu Biao, and Sun Jian. However, Huang Shao is a powerful potential ally and relatively close.

Standing his ground can be tough, so it might be better for He Yi to flee elsewhere – perhaps south-east – to rebuild and gather strength for the rebellion. In this position of relative safety, He Yi can grow a strong power base before properly returning to the fray.

He Yi has a special building that increases public order and population growth as well as a campaign bonus that lowers recruitment costs as the population increases, meaning he’s able to get up and running relatively quickly.

Surviving the early game is the biggest challenge for He Yi – after that, it becomes an uphill struggle to gain legitimacy in the eyes of the regular factions. When He Yi comes reaches the point where he is able to make peace, he can effectively cease hostility with factions in one direction and focus on expanding in another.

He Yi’s village healer building allows him to stabilize and develop conquered territory faster than most factions. If he can keep the momentum going, He Yi is able to support multiple armies and be a real threat to the main factions, allowing him to make a march on the capital and seize it through brute force.

What kind of player is He Yi for?

He Yi is the archetypical Yellow Turban warlord – he cares deeply about the people, gaining strength from the masses and thoroughly devoting himself to the cause of delivering the era of Great Peace.

However, although much of He Yi’s focus is on the wellbeing of the people, he can harness the power of the people and benefit from reduced recruitment costs to become a very dangerous foe if left unchecked.