Our next warlord is Huang Shao, the Wielder of the Heavenly Way.

Huang Shao, the Wielder of the Heavenly Way 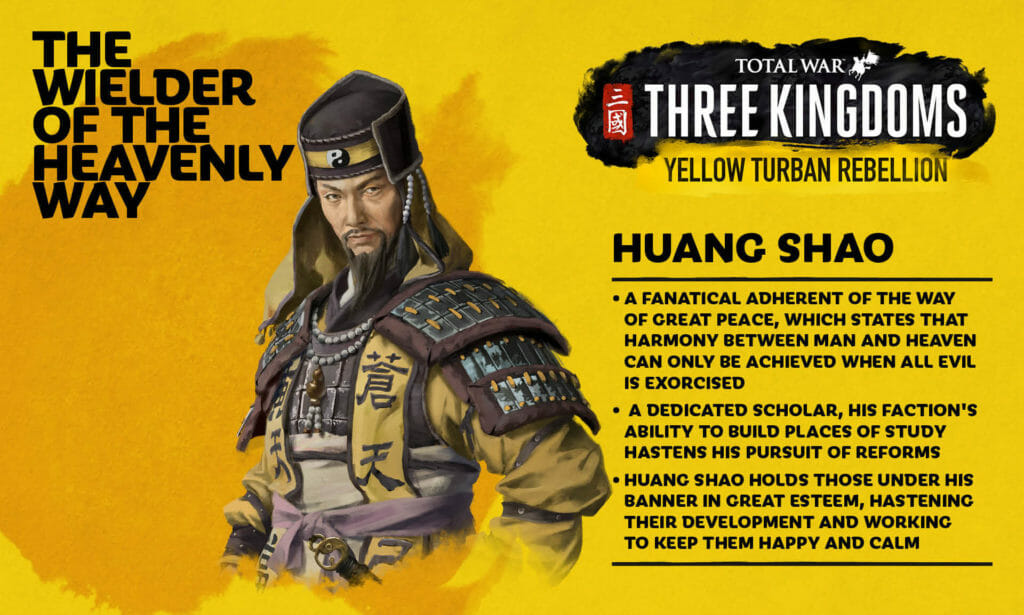 Huang Shao is an adherent of the Way of Great Peace, which states that harmony between Man and Heaven can only be achieved when all evil is exorcised. For Huang Shao, there can be no compromise in his beliefs. There is only the way of the Yellow Sky – and all those who oppose it will be rent asunder.

Huang Shao is a scholar, and thus embodies the virtue of humility. While wiser than most, Huang Shao does not fall to prey to arrogance. Instead, he constantly seeks to increase his knowledge – and the knowledge of others – in order to better understand the will of Heaven.

Of all the remaining Yellow Turban leaders, Huang Shao is the one who is most loyal to the teachings of Zhang Jue, the original founder of the movement. This allows him unique insights with which he hopes to guide the Yellow Turbans and ensure the path laid out by Zhang Jue is not lost or forgotten.

Huang Shao devotes himself to study, and so his faction is the quickest to progress through the path towards enlightenment – provided that enough places of study are constructed in the territories that fall under his influence. This makes it important to pick the most beneficial reforms to study – and as Huang Shao can potentially pick new reforms more often than others, this allows him to adapt to changing circumstances more quickly.

Huang Shao holds those under his banner in great esteem, hastening their development, building gardens to keep them happy and calm their minds, and going on assignments to locate characters with special, powerful traits in order to bolster his forces. Building up those in his trust and then supporting them with elite Yellow Turban units is Huang Shao’s path to victory.

As a scholar and devotee of the Way of Great Peace, Huang Shao’s army is made up of particularly zealous individuals. 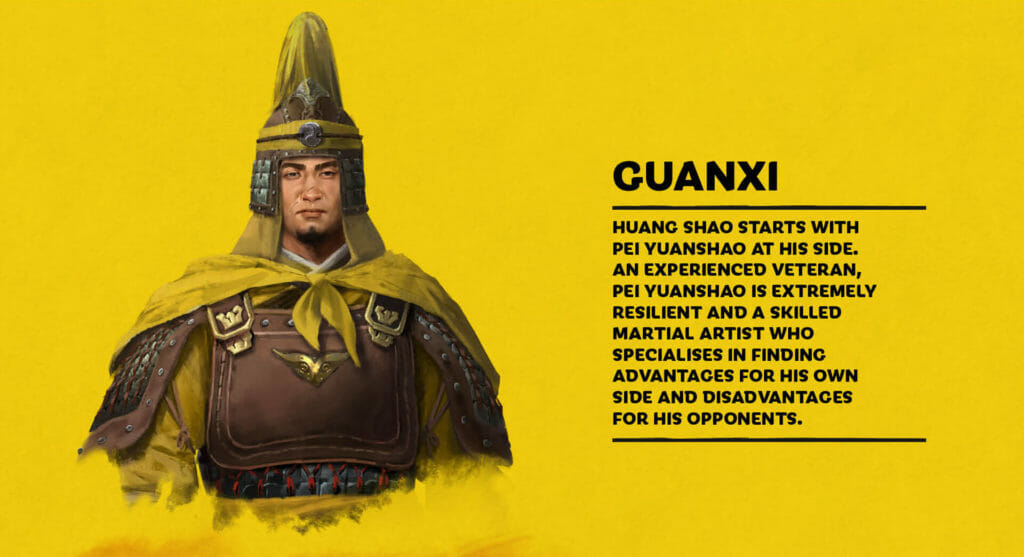 Huang Shao starts with the loyal Pei Yuanshao at his side. A Yellow Turban veteran, he believes strongly in Huang Shao’s vision of a virtuous new regime united under the Way of Great Peace.

An experienced veteran, Pei Yuanshao is extremely resilient and a skilled martial artist who specialises in finding advantages for his own side and disadvantages for his opponents. This makes him invaluable for holding the enemy warlords at bay in some of Huang Shao’s most difficult battles.

As Huang Shao, the odds are stacked against you.

You start surrounded by enemies – most notably Kong Rong, Liu Bei, and Yuan Shao – and you will have to choose to either lash out and strike first or play defensively and hold out until your forces are strong enough to slowly start expanding.

Defence is difficult, however, as Huang Shao’s territories are split by the Yellow River, and defending the west bank will require considerable military investment.

Another option is to abandon part of the starting territory and head north-east, where there is a nearby peninsula that is quite defensible.

The early game is definitely the most challenging part of Huang Shao’s campaign.

One danger is that you are worn down from the attrition of war as the Yellow Turbans start with nearly every faction as their enemy. As Huang Shao has an edge when it comes to developing reforms, however, he is one of the first able to reach the point that he can start to make peace with the other factions. Things start to become slightly easier from here, but it is still an uphill struggle.

Over time, any other surviving Yellow Turban remnants are likely to want to form a coalition with you. He Yi is closest, so if he is still around by the early mid game, you may want to expand in his direction and link up.

As you progress down the path towards enlightenment, regular factions will start to recognise you as a legitimate faction, with more diplomatic options becoming available with time.

What kind of player is Huang Shao for?

If you want to focus on research and enlightenment as well as character growth and experience, Huang Shao is the right choice.