One thing’s for certain: without weapons, we wouldn’t have any Total War games.

This week we chatted with Nikolay Toshev, a principal artist working on A Total War Saga: TROY, about what it’s like to design weapons for the denizens of TROY all the way from research to realisation – and of course whether getting to grips with real historical weapons helps when creating their video game counterparts. 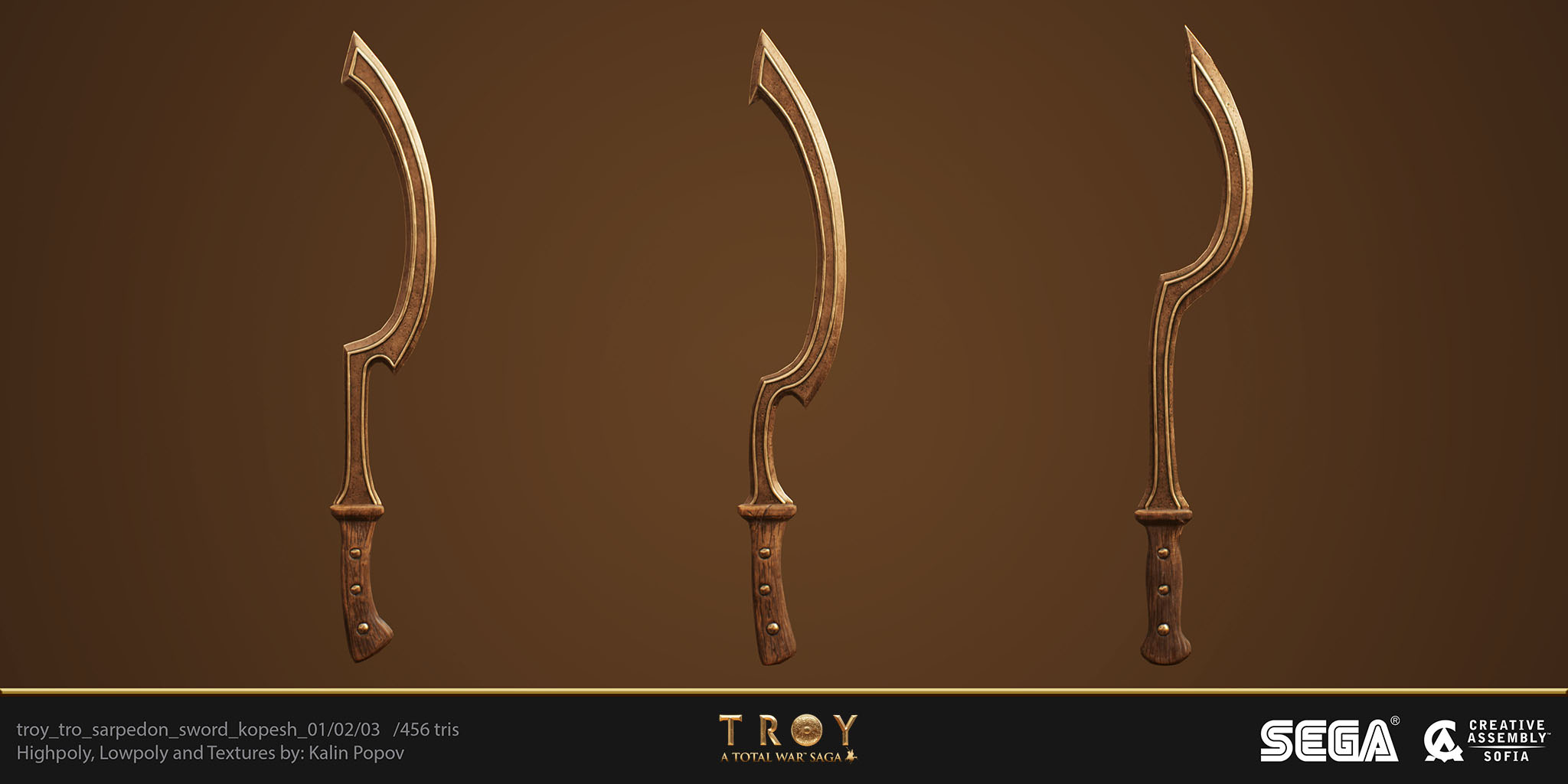 First off, a little about Nick himself.

A fan of strategy games ever since he played Age of Empires II, he credits this with sparking his interest in history. He started out in the games industry working on Roman Empire themed city building games, saying “it felt natural that one of my first tasks after I joined Creative Assembly was to design the look of the faction leaders for CA Sofia’s ROME II DLCs such as Aurelian and Zenobia.”

For TROY, he did the character designs for Agamemnon, Menelaus, Aeneas, and most of the Danaan and Amazon units, while also being responsible for the lighting in the game as well as various other tasks related to its visuals. 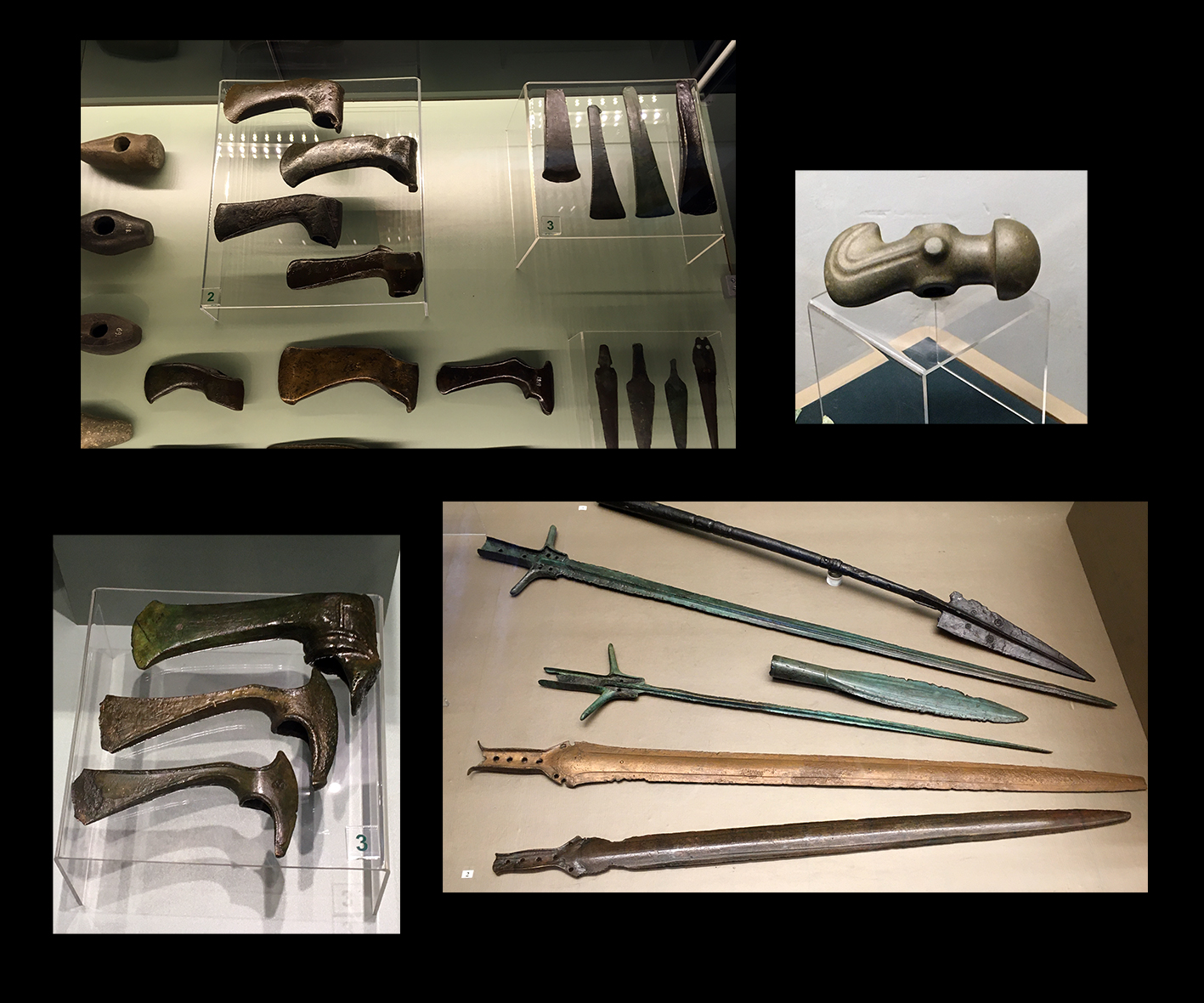 As with most things at Creative Assembly, the process of designing TROY’s weapons begins with a brief – in this instance detailing what weapon class the unit or character in question is.

“We then look at reference to see if we can find a real artefact it would be appropriate to base the weapon on,” Nick explains. “For some Heroes, we go heavy on the decoration after getting inspired by jewellery and votive weapons found at the burial sites of nobles and kings. For common units we design simpler weapons, but sometimes we sketch out several different variations of each so that not every soldier in a unit is armed exactly the same way.”

As far as the research process goes, the team have a fair amount of sources to reference, Nick says: “Unlike armour, there’s a lot of well-preserved bladed weapons from the Bronze Age, so the books on Bronze Age warfare we referred to were abundant with reference.” Nick was also able to visit museums in order to check out authentic swords, axe heads, and a mould for a “beautiful” war hammer design in person. 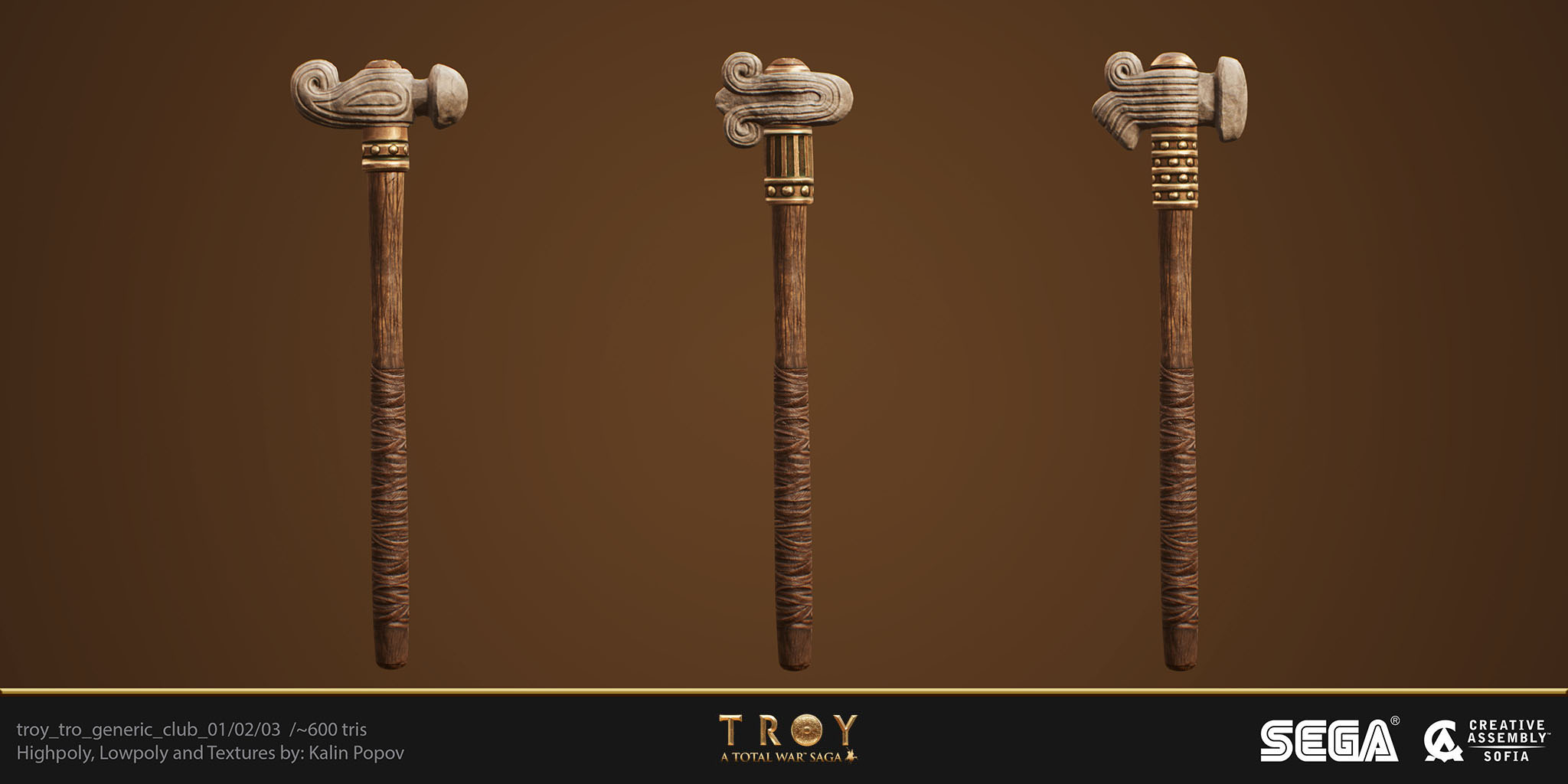 So does getting to grips with actual weapons – in a safe environment, of course – actually help when designing them for video games? According to Nick: “Absolutely.”

“I’ve handled historical weapon replicas of varying quality and once you feel the difference an unbalanced blade makes, your taste for aesthetics starts gravitating around simpler, more practical weapon designs. We actually had some bronze swords commissioned for sound design purposes, and handling them was very informative – not to mention quite fun.” 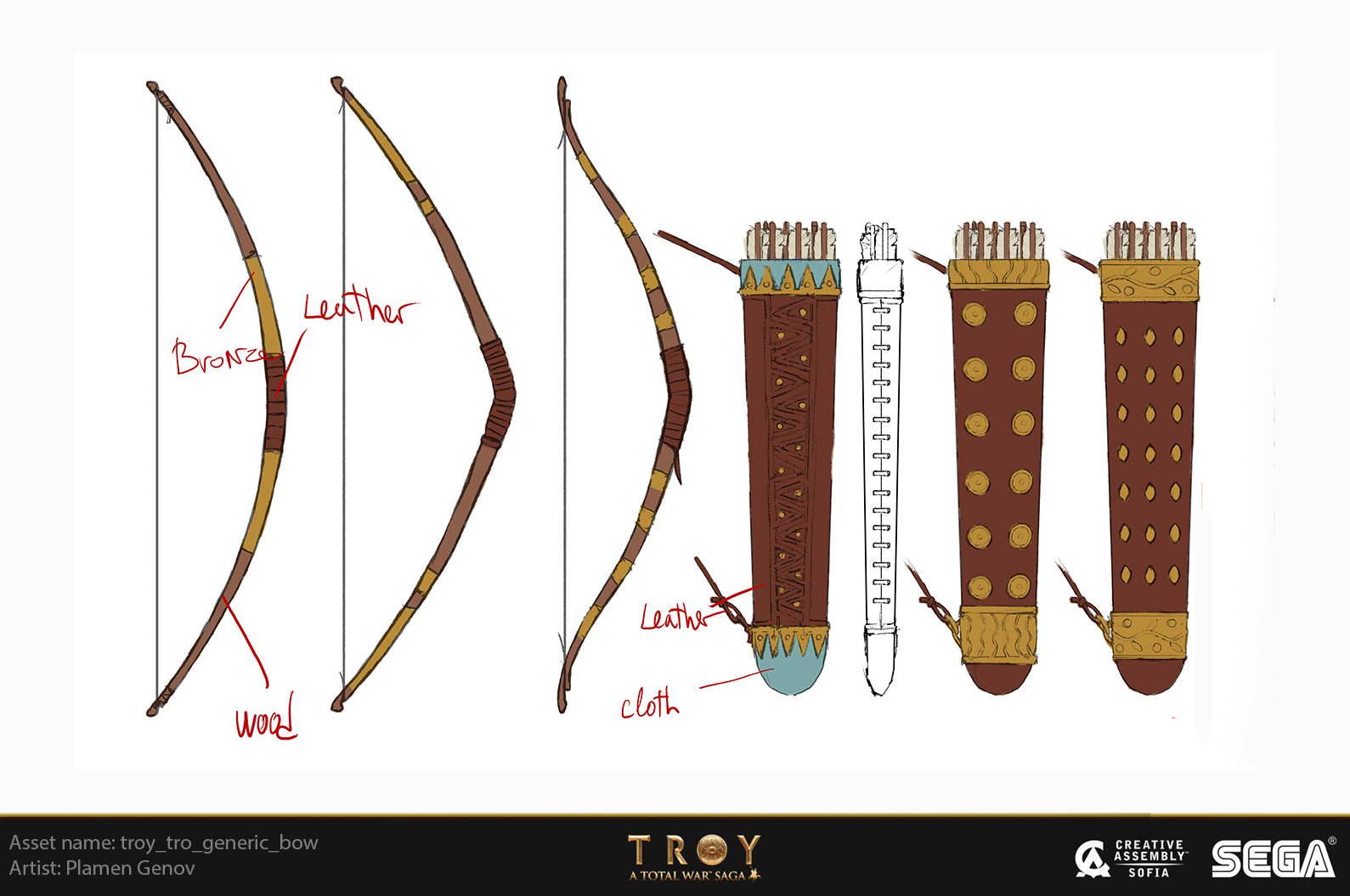 What are the more challenging parts of designing weapons for Total War games?

According to Nick: “I’ve always felt there’s a very narrow range in which weapon designs work. If a design is too simple, the weapon feels boring and unremarkable; if it’s too elaborate, it feels phony and inauthentic. Staying within that range is challenging. With historical Total War titles we generally aim to keep weapons realistic, but we have to keep the game camera in mind. This is why we make some spears and arrows thicker than normal – they read better from a distance that way.”

And what about the all-important issue of realism? Surely the medium of video games allows a certain degree of freedom when it comes to enabling more unusual creations? 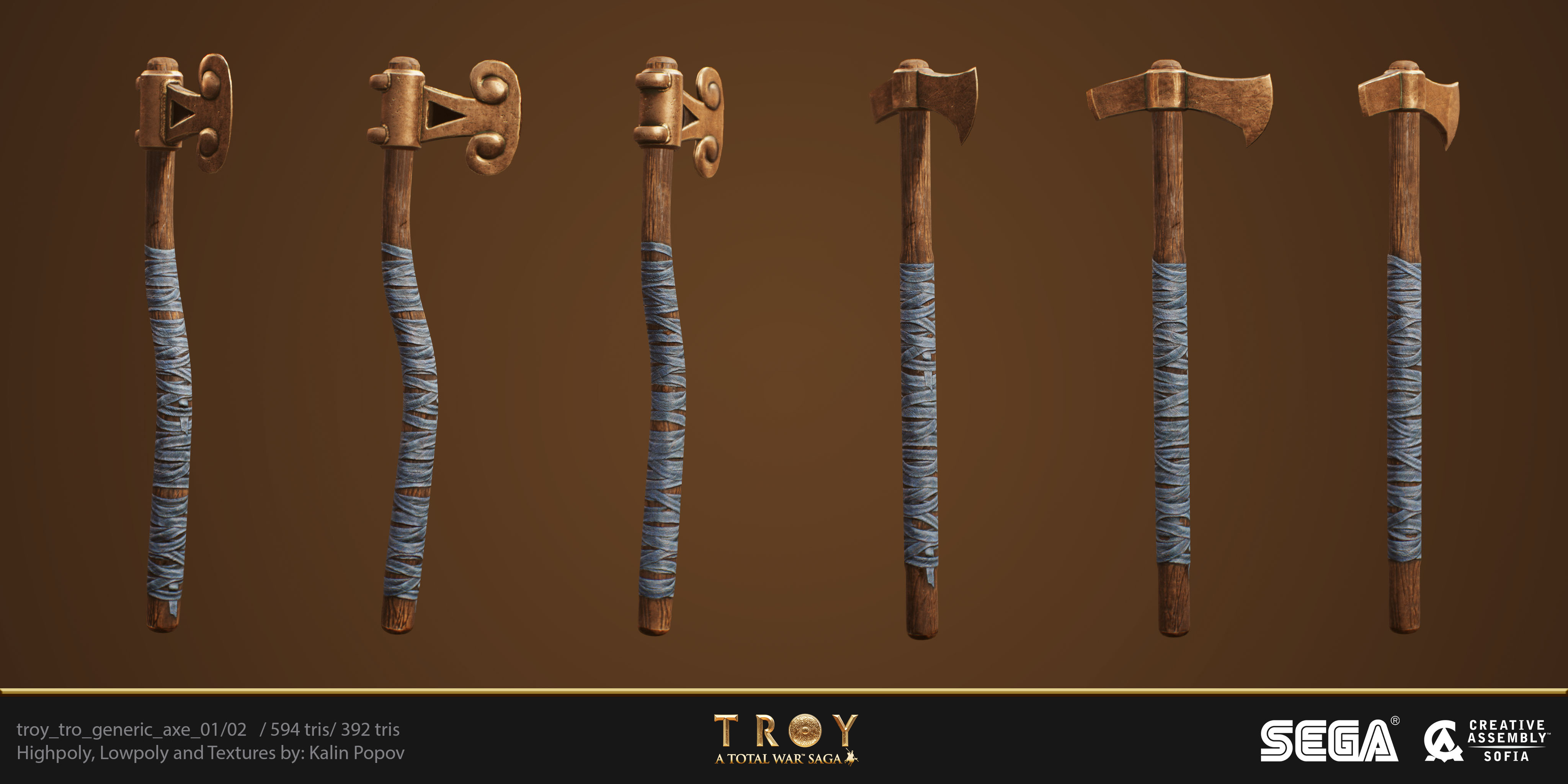 “This depends entirely on the gameplay you need to have and the story you want to tell,” Nick opines. “Gritty, visceral violence calls for realistic weapons, while over-the-top, stylized fighting works best with exaggerated weapons. With video games, you’re generally not bound by physical constraints like when an actor has to wave a prop around, so in terms of outlandish designs the sky’s the limit, really.”

Fittingly considering the latter statement, Nick says that the strangest weapon he’s ever had to design is “a war hammer with the entire planet of Jupiter on.”

While TROY might not have a great deal of weapons with entire planets on them, we did take this opportunity to ask Nick what his favourite one in the game was. His answer:

“Sarpedon’s axe, which is inspired by a real artefact and designed by my colleague Mira Katzunova. I love how the axe head is shaped like a leopard and the classic Minoan pattern stands in for the spots – I’m a big fan of designs working double duty like that.” 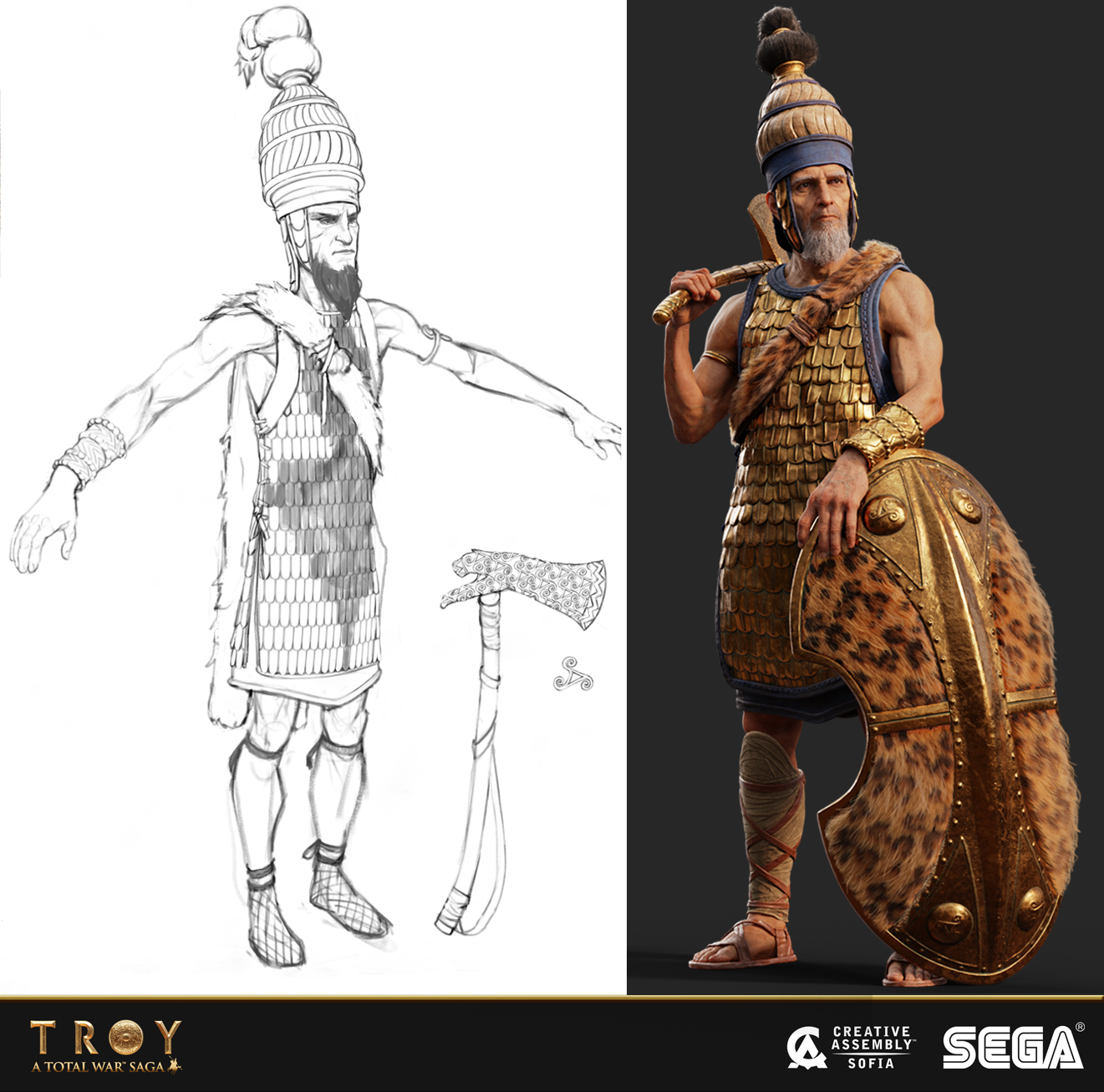 And what tips would Nick give someone else looking to design weapons for video games?

“Go smaller than expected if you’re doing a historical game. Real axes and war hammers and stuff are surprisingly small – after all, a tiny hole in the skull is about as deadly as a big one, so with historical weapons less is more. Go bigger than what seems reasonable in a fantasy game. In fantasy, weapons are an extension of the character – the more powerful a character is, the crazier the weapon.”

If you’re interested in finding out more about A Total War Saga: TROY – including how the team made all the excellent weapon and armour sounds used in the game – make sure to check out this interview with Creative Assembly Sofia audio lead Kiril Petrushev.