It simply wouldn’t do to have the heroes of Troy marching out onto the field improperly dressed – but luckily the Creative Assembly Sofia art team has them covered.

Today we’re again chatting with Nikolay Toshev, a principal artist working on A Total War Saga: TROY, but instead of looking at weapons this time he’ll be telling us all about costumes, armour, and everything in between. 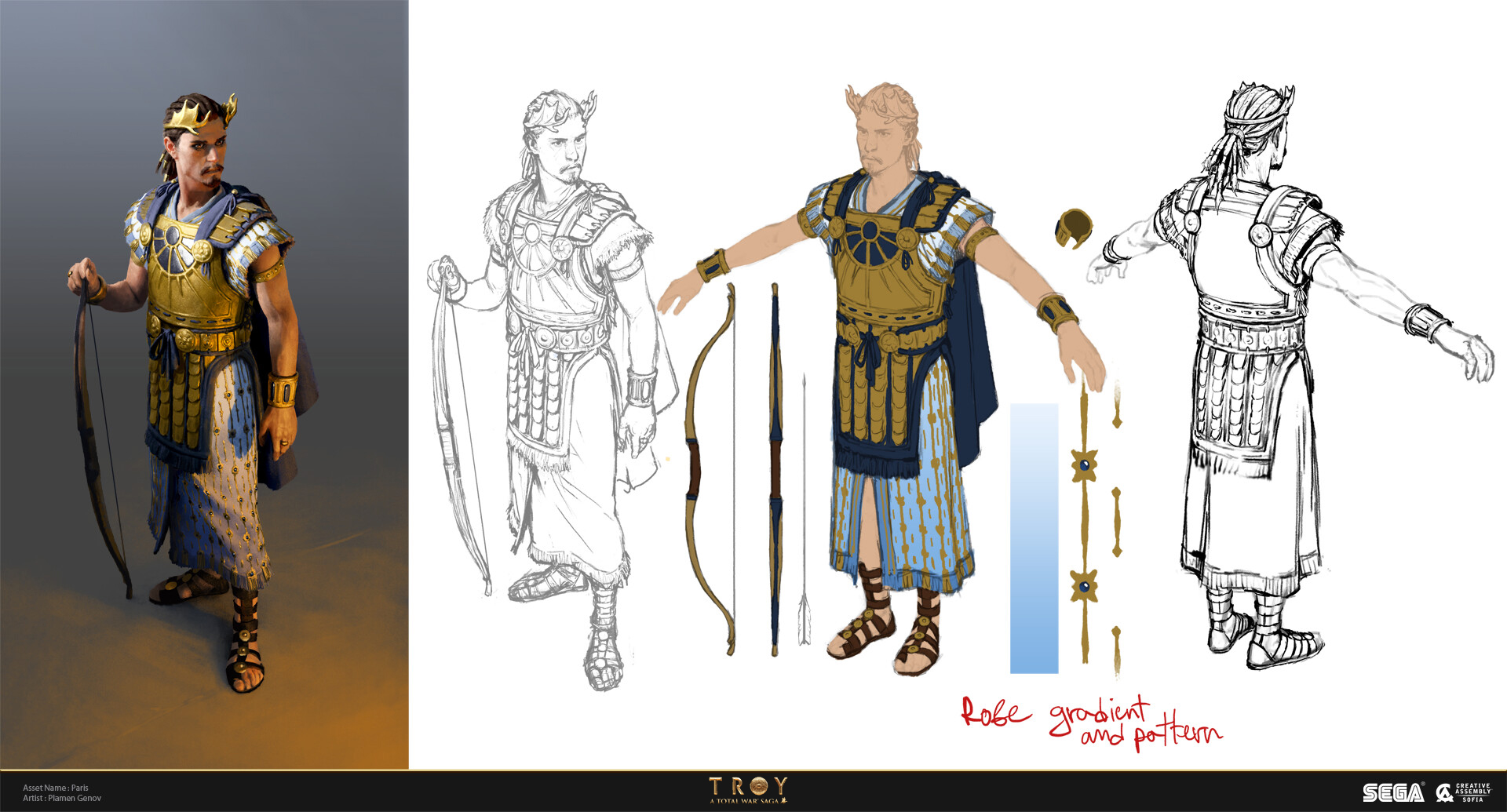 For TROY, the team had to research both archaeological and literary sources – but they approached each of these differently.

“We collected all kinds of reference on Bronze Age equipment used in conflicts between Aegean civilizations that might have inspired the Trojan War legend,” Nick explains. “We purchased books on Mycenaean warfare, the Bronze Age collapse, the Sea Peoples – everything. We referenced central and western European – as well some Egyptian – equipment, as we figured similar designs might have ended up in the Mediterranean through trade or shared crafting techniques, and we needed all the variety we could get.” 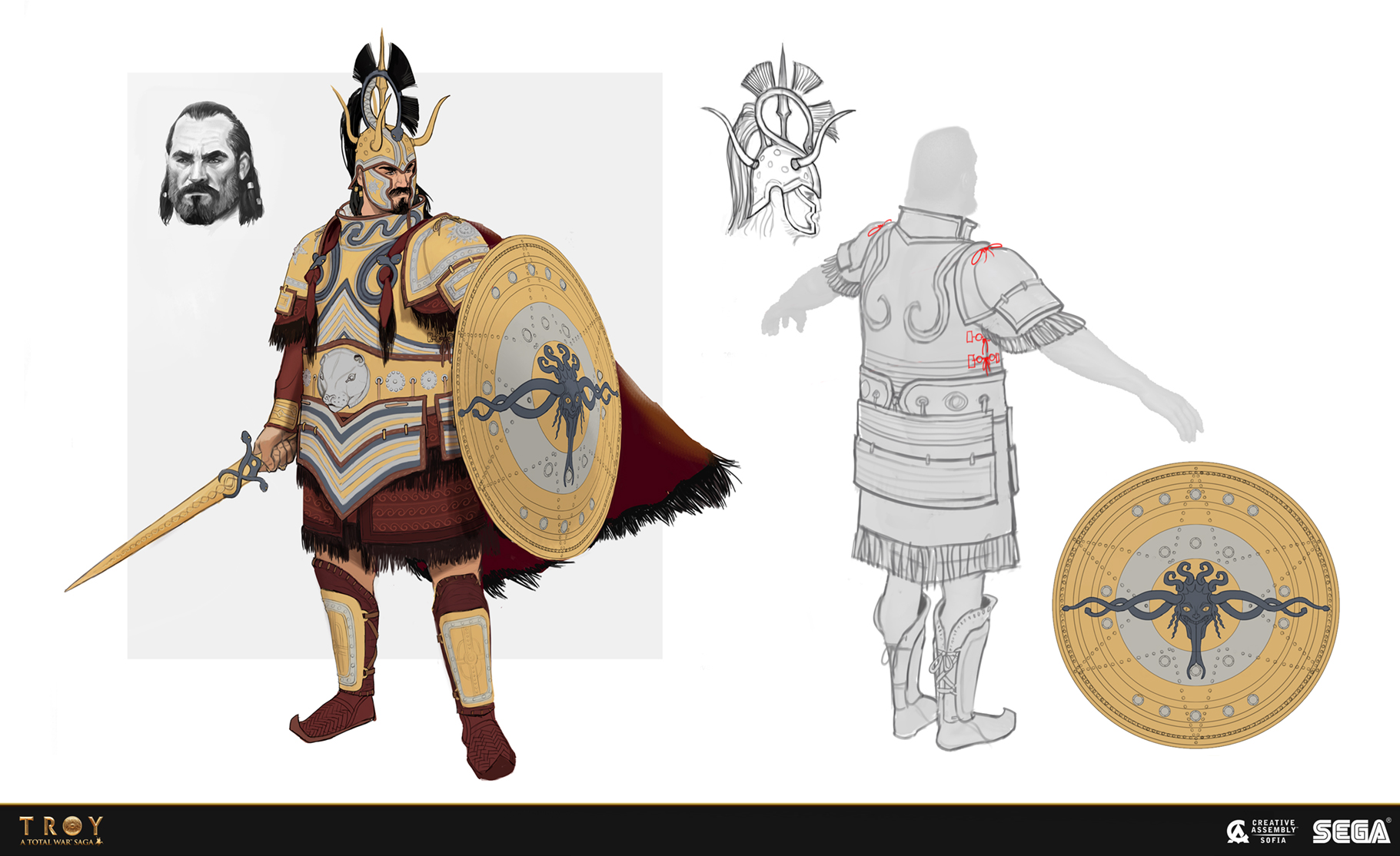 “I’d say we relied on archaeological findings to inform style and on literary sources such as the Iliad to inspire content,” Nick muses. “So, for example, Agamemnon’s armour is adorned with snakes as a nod to Homer’s description, but as a whole the panoply is a Bronze Age design Homer might not have been familiar with as he lived generations later.”

With a healthy library of reference materials to draw from, the team then got on with the designing part of the process. Nick explains:

“We began by establishing a visual language to differentiate our major cultural groups – for example, we decided the Danaans would use plate armour, blocky shield shapes, and warm colours, while the Trojans would prefer scale armour, biconcave shield shapes, and longer garments dyed in colder hues.”

He acknowledges that this isn’t strictly historical – in reality, everyone in the region probably dressed for war similarly – but the team needed strong, differing visual themes to make the two sides of the conflict appear distinct.

With this visual vocabulary in mind, the TROY team then worked on developing the looks of the legendary heroes, following the game designers’ briefs which outlined the heroes’ personalities and playstyles. Once approved, the heroes in turn informed the looks of their respective faction rosters and unique units. Nick explains this further as follows:

“So, for example, Agamemnon is an arrogant ruler who loves flaunting his power – this is why his armour is ostentatious and perhaps a bit over-compensating, while his Mycenaean guards have an imperial, almost Praetorian feel to them. In contrast, Odysseus is a trickster who favours guerrilla tactics – he has lighter, more practical equipment and his ambusher units are dressed to blend in with the environment or stay stealthy at night.” 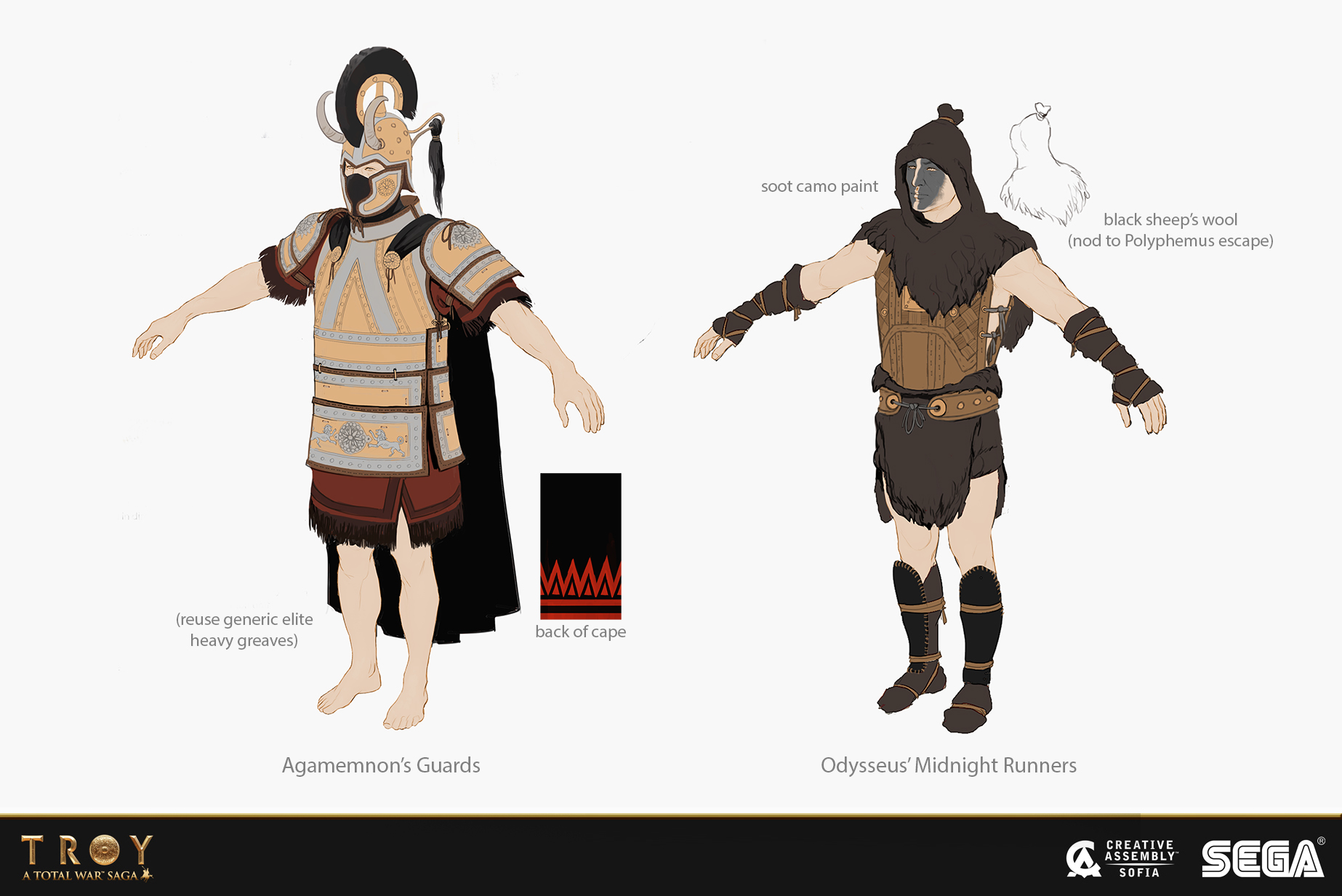 Designing characters and their costumes for video games – especially Total War – has its specific intricacies, something that Nick is keen to signpost:

“In Total War – just as in all games – gameplay is always a priority, so every costume shouldn’t just look good on the box art but also be readable on screen and ideally communicate the character’s role. Aside from that, in games like Total War where you can get thousands of models on screen at once, there’s always technical limitations to what’s possible if you want to keep a decent framerate. When I was starting out, real-time cloth simulation didn’t exist and polygon budgets were quite low, so for example a realistic Roman toga draped around a character was a nightmare to model and animate. Nowadays the tech is more advanced and computer specs are better, but there’s still limits to what’s achievable.” 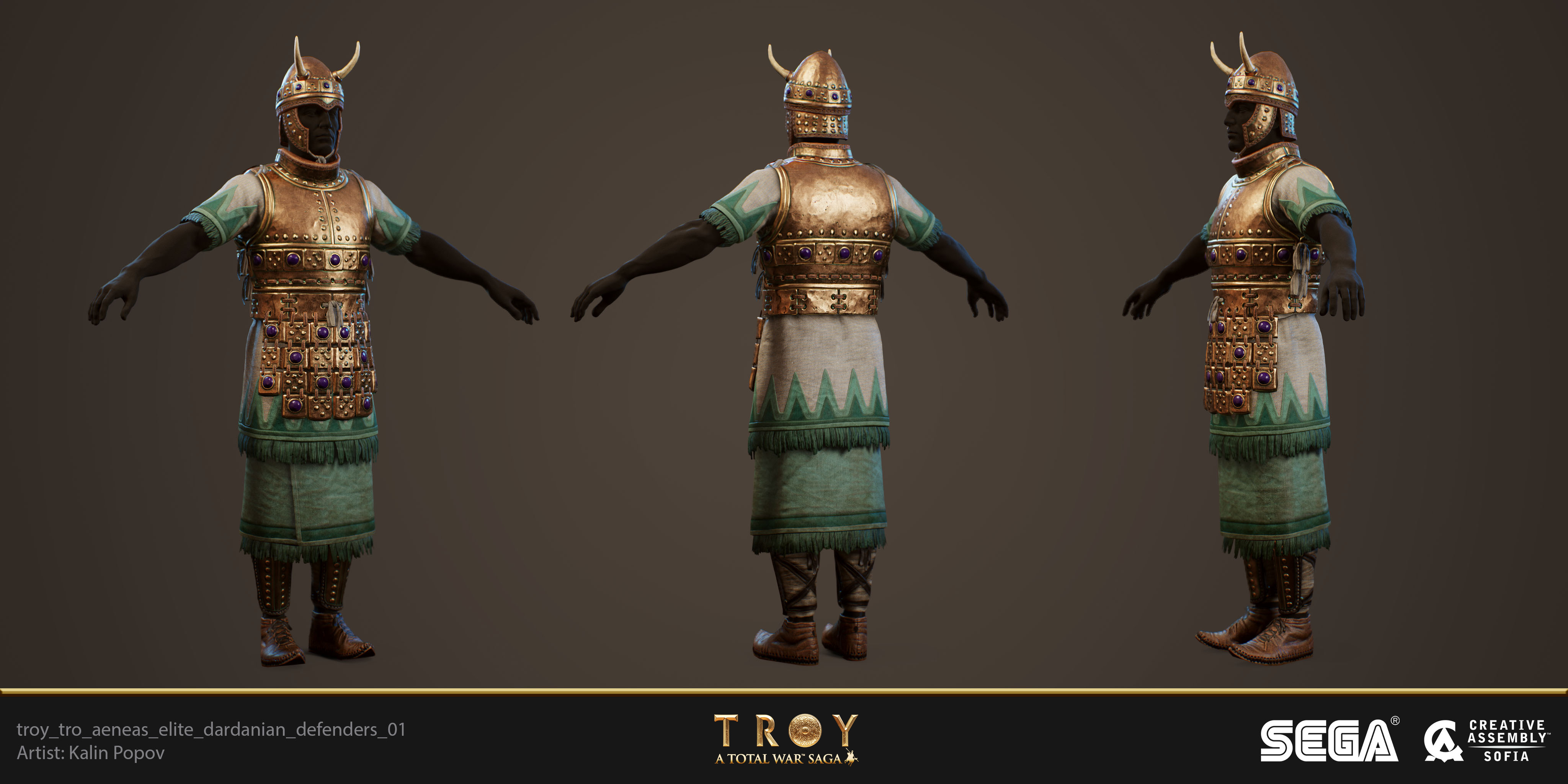 In Total War games, the challenges don’t just end at cloth – there’s plenty to consider when designing armour as well.

“Diversity was the greatest challenge,” Nick states. “Gameplay demanded that for example we’d have a regiment of well-armoured soldiers standing next to heavily armoured ones standing next to veteran, extremely heavily armoured ones. That’s way greater tiered variety than would have been plausible for a real-life Bronze Age army, not to mention we needed to have dozens of different armies fielded by multiple distinct factions and cultures.”

To complicate things further, references for armour were relatively scarce, with there only being a few fragmented bronze panoplies recovered from the time period. Additionally, armour crafted from materials prone to decay such as leather could only be theorized from stylised images on frescoes and pottery. 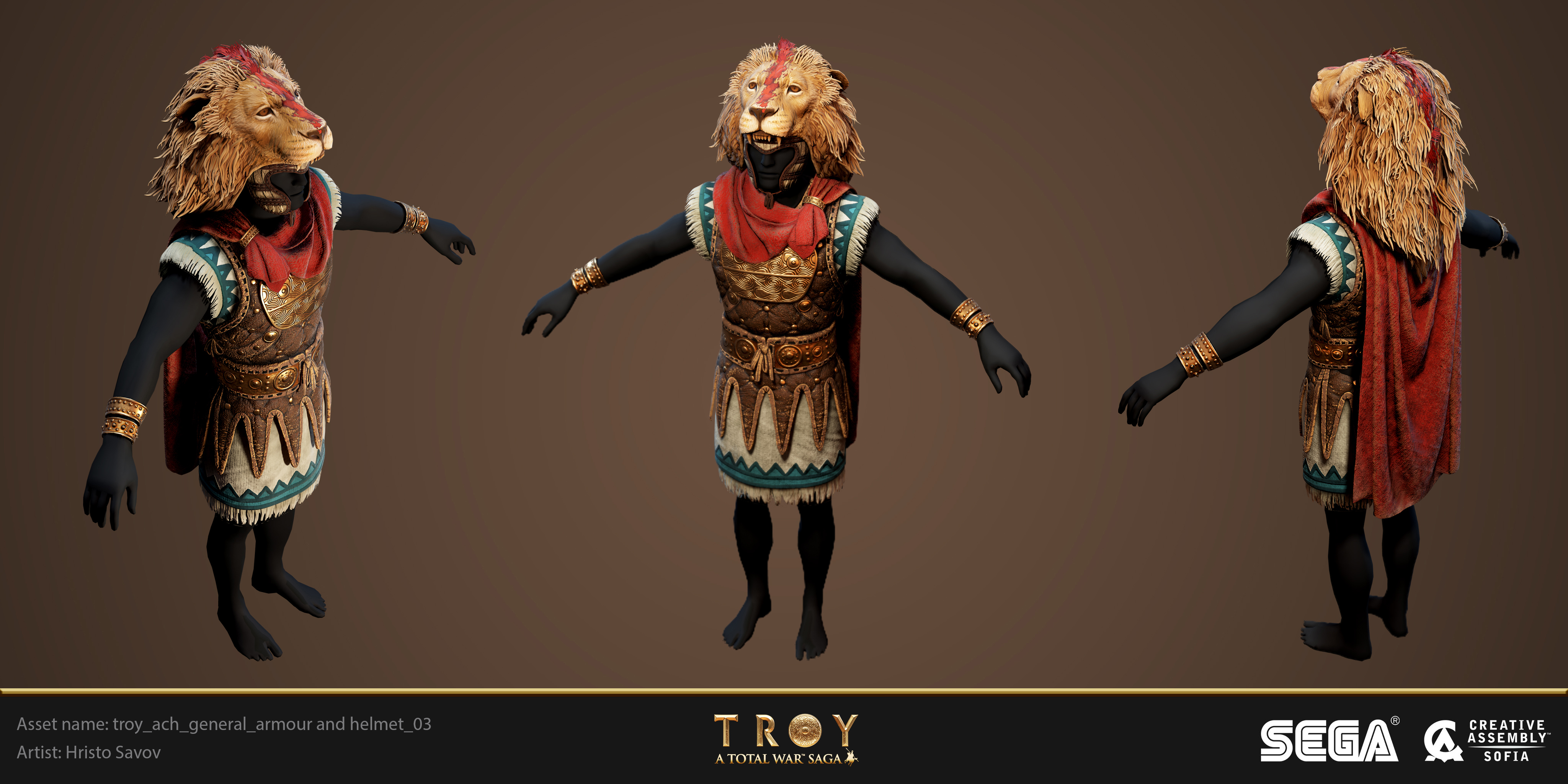 “This is why we had to do a lot of creative gap-filling,” Nick explains further. “Some armour we designed to look like it was in speculative “mid-point” stages of development, between earlier and later era historical equipment. Others were simplified or more elaborate reimaginings of existing ones.”

Once again, the importance of realism is something that cannot be underestimated in a historical title – but, as can be seen from the above, there are limits to what can be feasibly achieved. As Nick says: “Realism is important in costume design because it makes the game world feel lived-in and authentic. While we couldn’t have made everything strictly accurate due to the spotty archaeological records, we did our best to make the equipment seem plausible given the materials and techniques used at the time.”

He adds by way of explanation: “What we did take some liberties with was dating and usage. For example, the famous Dendra panoply’s design was likely obsolete by the time of the Trojan War, and realistically might have been used only by charioteers. However, when you have a unit described as an “extremely heavily armoured charger”, it would be a waste not to reference the heaviest and most iconic piece of Mycenaean equipment.” 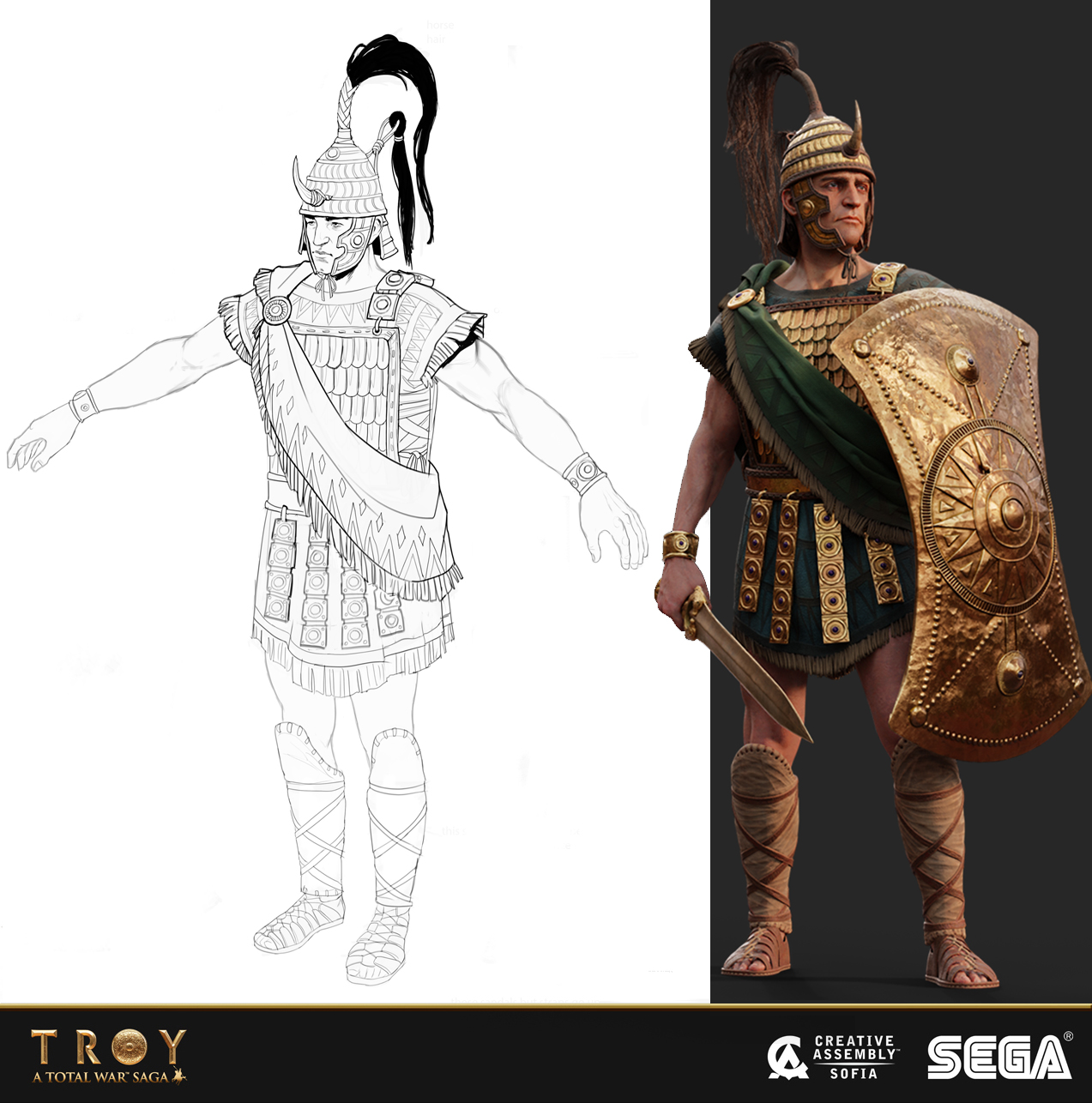 So, when all’s said and done, what is Nick’s favourite costume from A Total War Saga: TROY?

“Of the ones I’ve worked on, I’m fond of Aeneas’s as it gave me a chance to sneak in some fun vaguely Roman-themed designs alluding to his mythic status as ancestor of the Romans. Otherwise, my favourite Troy costume is Paris’s, designed by my colleague Plamen Genov. I think it’s a great fit for Paris’s princely character, and his crown reminds me of a famous ancient treasure discovered near my birthplace.”

Nick’s fondness for Roman design shows itself again when he’s asked whether he’d want to have any one costume he’d designed in real life, saying: “I’d love to don the helmet of ROME II’s Emperor Aurelian so I can praise the sun in style.” 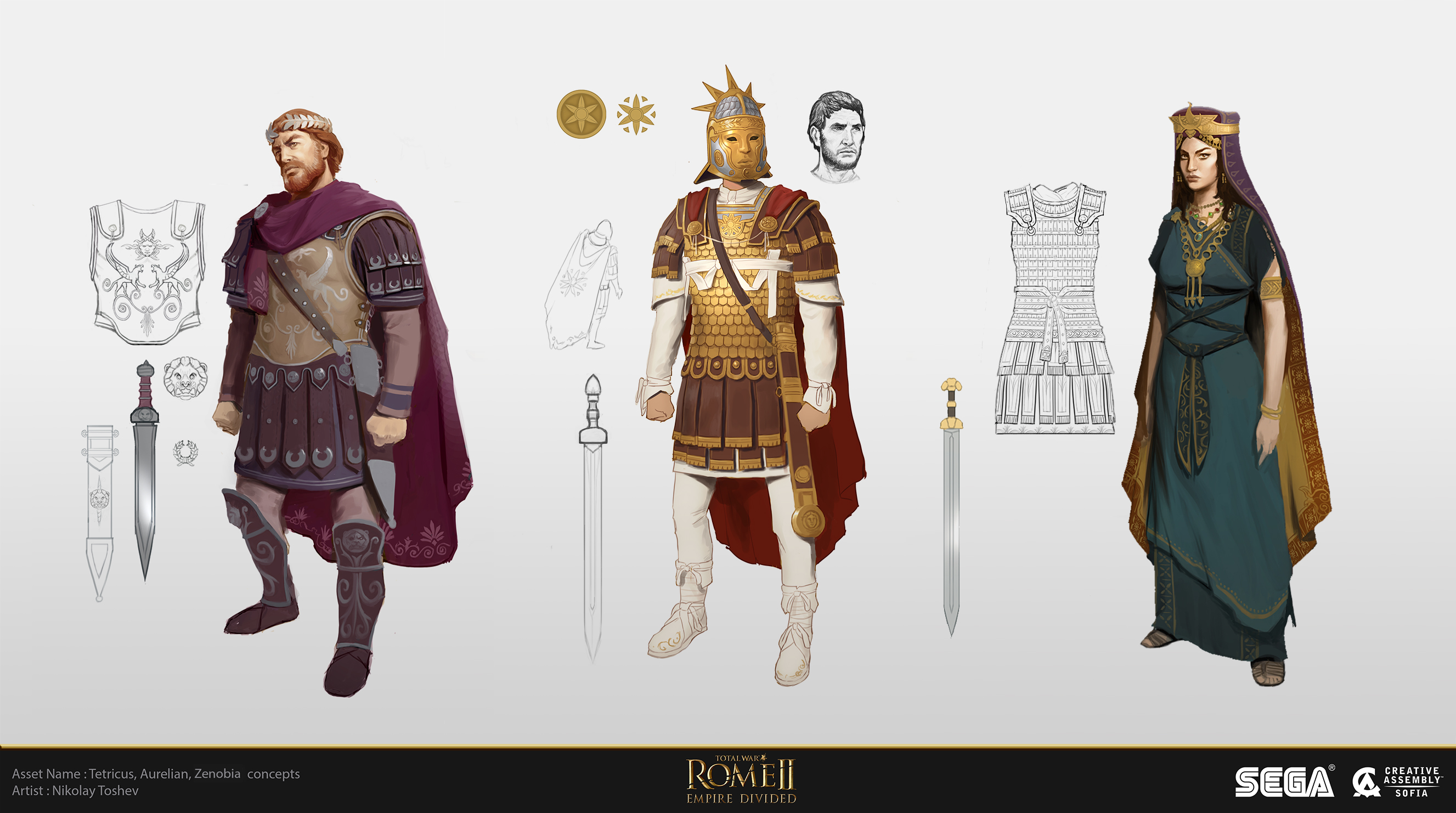 And finally, Nick has some tips for those looking to level up their video game character costume design:

“Design for the in-game camera. Keep gameplay in mind, not just aesthetics. Get familiar with the work processes of the 3D artists and animators who’ll be bringing your designs to life – it will save you a lot of time.”

Be shiny and bronze

If you want to find out more about what goes on behind the scenes at Creative Assembly’s Sofia studio, be sure to check out this interview with audio lead Kiril Petrushev as well as what goes into designing TROY’s weapons here.

Also make sure to pre order your copy of the latest DLC A Total War Saga: TROY – Ajax & Diomedes here! 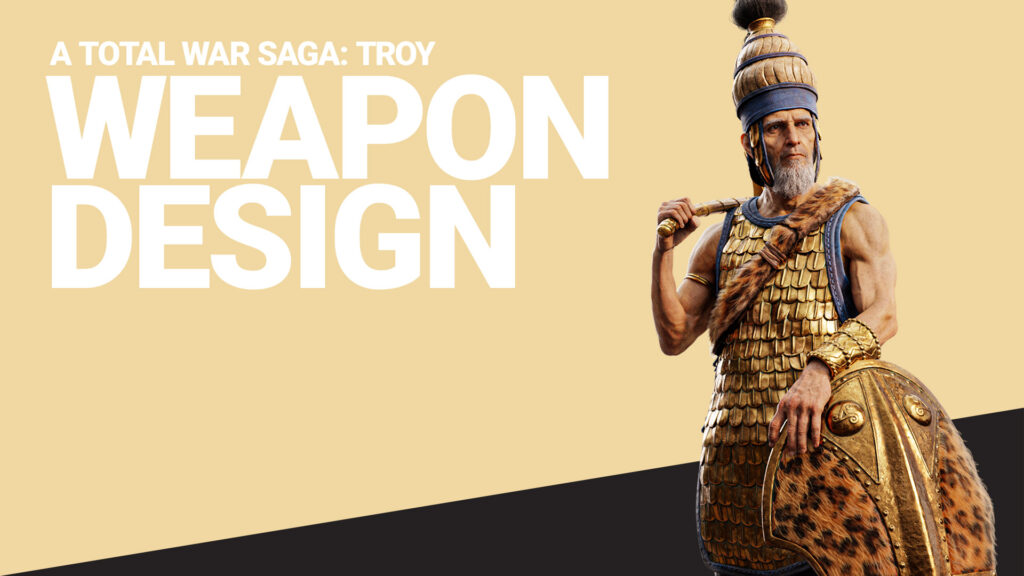