Our next warlord is Zheng Jiang, the Bandit Queen. 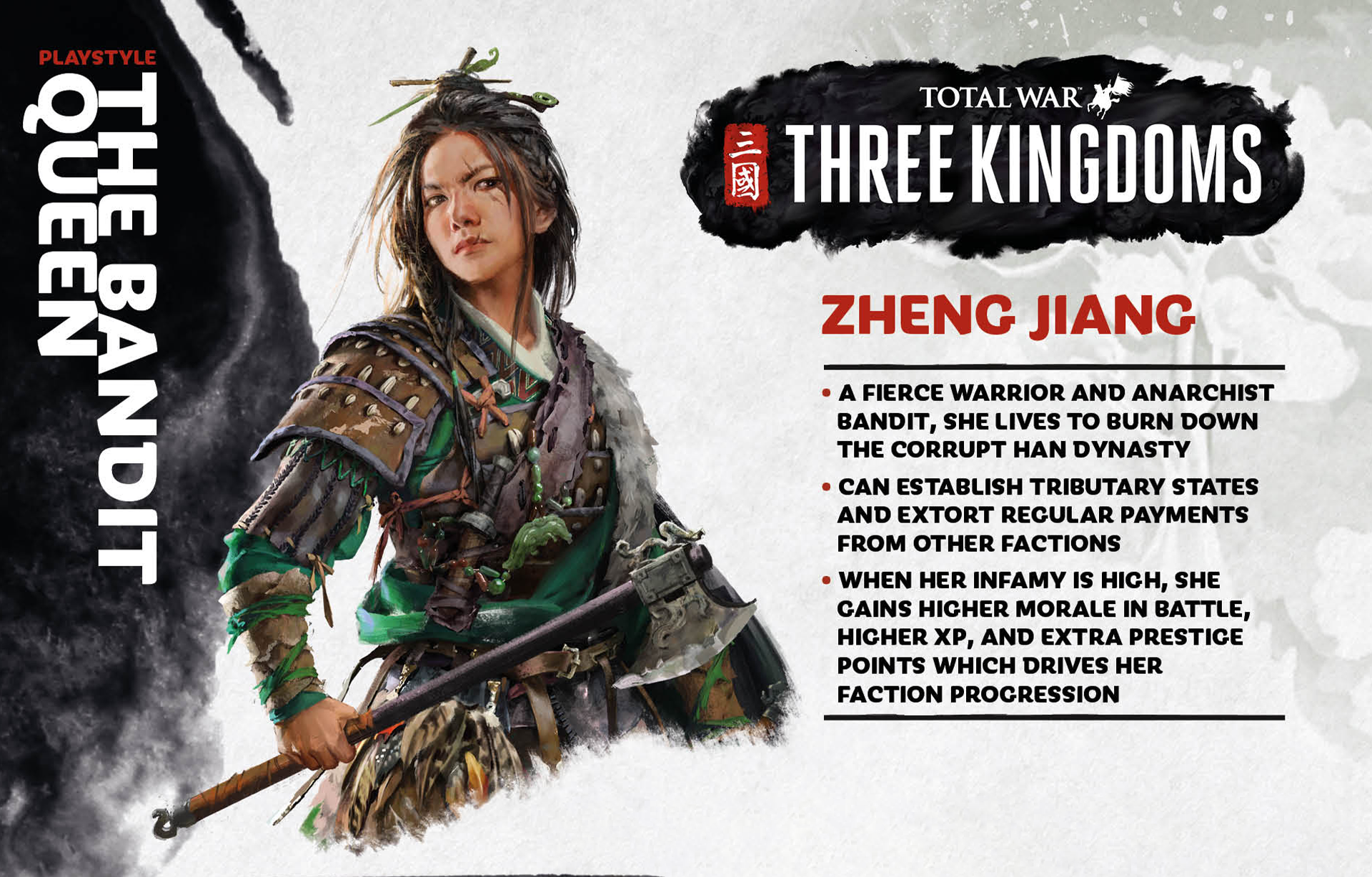 Dynasties and nobility mean nothing to Zheng Jiang: she prefers to seize glory in her own way. As the Han burns, she sees at last the crumbling of an institution she deeply despises – what have they ever known of hunger? What fear have they ever felt for corrupt and avaricious officials? Zheng Jiang has never known the ease of a noble upbringing, nor the expectation of “civilised” society. Instead, she is resolved to earn fame and prestige for herself through merciless fury and unrelenting strength.

Her coming had allegedly been predicted by the scholar Liu Zhen in a dream, with renowned interpreter of dreams Zhou Xuan – said to be right nine times out of ten – warning him that female rebels would soon be at hand.

Unlike some of her fellow bandits, Zheng Jiang is driven by a true political agenda: she wants to see the Han dynasty burn and fall at her hands. She thrives on this vision, relishing her rise to power and the chance to put the old oppressors under her boot to give them a taste of their own medicine.

Zheng Jiang loves to have power, and she also loves demonstrating it. She operates by subduing others and forcing them to pay tribute to her. As her infamy grows, Zheng Jiang’s popularity – not surprisingly – decreases, making diplomacy more and more challenging as time progresses.

However, as Zheng Jiang’s power grows and she becomes more established, she also becomes more and more like the regime she is trying to bring down. Old Han structures will still be in place left and right, and Zheng Jiang will have to use them in order to lead what is essentially a new state. Zheng Jiang will also need ringleaders who are true to her cause to take her will into the provinces.

For Zheng Jiang, infamy – and the momentum it brings her – is key. She gains infamy from winning battles and striking settlements – but this will decay if she becomes too passive. Zheng Jiang must keep driving relentlessly forward or else she will lose the element of surprise and her rebellion will surely fail.

Infamy is earned by capturing settlements, winning battles, and having tributary states (which acknowledge her power by paying her money but are not bound to follow her into war). However, infamy automatically reduces over time, so Zheng Jiang can’t rest on her laurels – if she’s too passive for too long, her infamy will decrease.

High infamy grants bonuses such as a higher morale in battle and higher character XP gain but most importantly it provides prestige points, which are required to increase Zheng Jiang’s faction ranks and eventually proclaim herself empress of a new dynasty.

As a faction leader, Zheng Jiang’s personal bonuses focus on quicker mustering time and increased income from tributaries. Zheng Jiang also has access to certain post-siege occupation options that enable her to loot and destroy on a grander scale than her peers. 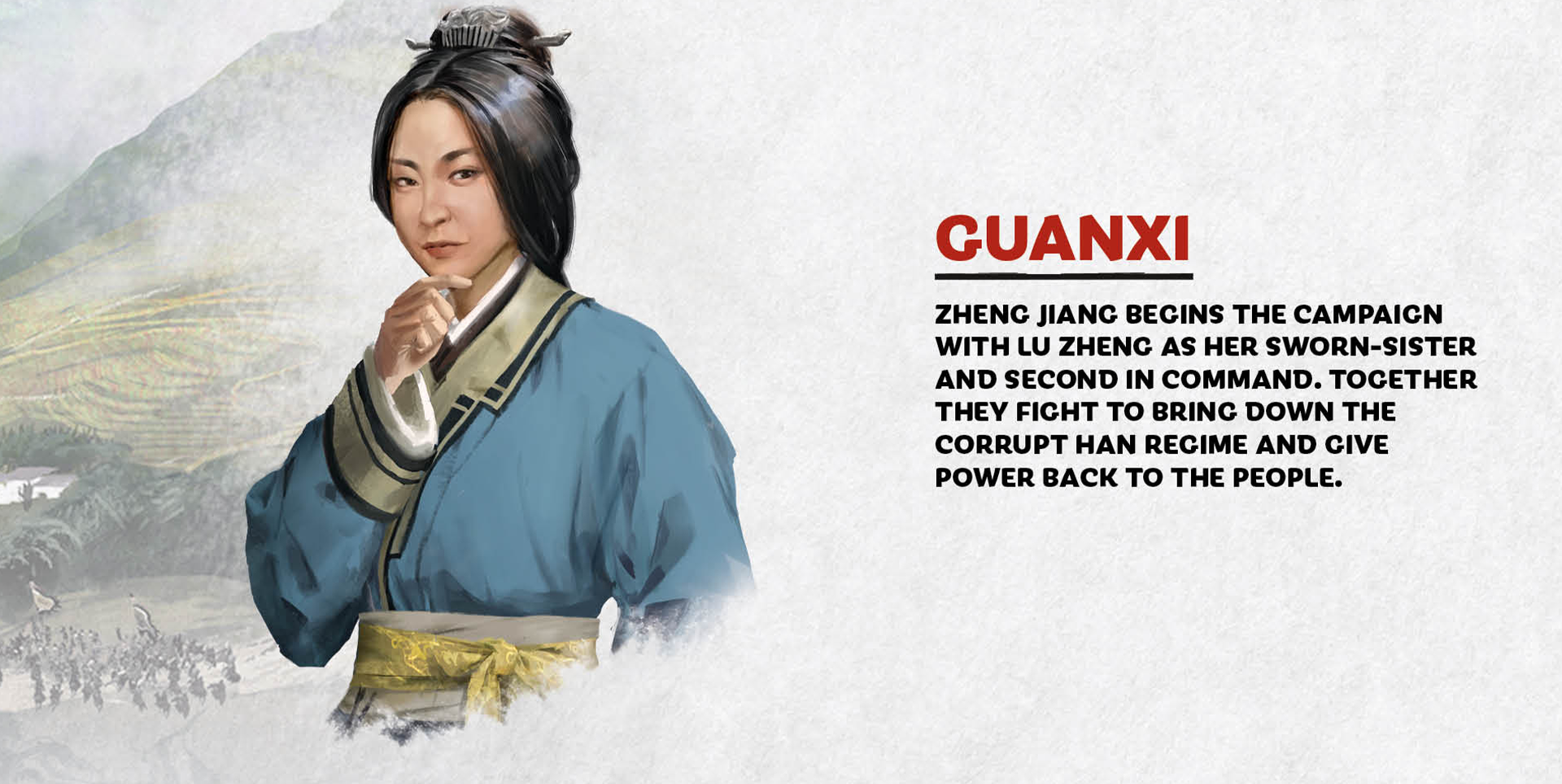 Zheng Jiang begins the campaign with Lu Zheng as her sworn sister and second in command. Together they fight to bring down the corrupt Han regime and give power back to the people.

With no other real allies to speak of, over time Zheng Jiang must focus on building up a following of loyal ringleaders who exercise her rule and ideas. Perhaps her biggest challenge is building up a dynasty and line of succession, with a clear candidate for this not immediately evident.

While it is tradition for children to take the name of the father’s family, Zheng Jiang refuses to follow the Han’s rules – in her faction, children are named after their mother.

Zheng Jiang starts out in the difficult terrain of the mountains, and at war with the neighbouring Dong Zhuo and Han empire.

However, the remoteness of her starting position does provide a good refuge and relative safety – but eventually she must leave this and start conquering.

As a bandit, she doesn’t have any clear established allegiances or diplomatic alignments, meaning her fortune and future are hers alone to carve.

Zheng Jiang’s dilemma focuses on establishing dominance in the mountains, and provides a different angle on the clash between Yuan Shao and Gongsun Zan.

As Zhang Yan enters the conflict, he calls on fellow bandit leaders for aid.

As Zheng Jiang, you have the choice of joining up with Zhang Yan against Yuan Shao or instead denying his request and declaring war on him in an attempt to secure your own supremacy over the mountains.

Zheng Jiang’s early game is all about setting up a good base of operations – regional income sources need to be exploited in order to fund her warlordry, and a hideout must be established. Overall, however, Zheng Jiang’s progression path is quite flexible, with a number of different routes open to her.

Due to her location in the northern mountains, Zheng Jiang can try to expand west, east, or south. Expanding east is the more obvious choice, and her dilemma points toward that direction, but likewise she can try to set her base of operations up in the west, or south of her starting position along the Yellow River.

During the mid game, Zheng Jiang must focus on building up her infamy through fighting and conquest – as well as establishing allies if she so chooses.

Finally, in order to ultimately emerge victorious Zheng Jiang must accrue enough infamy to reach high levels of prestige, thus enabling her to proclaim herself empress and topple all other pretenders.

What kind of player is Zheng Jiang for?

Zheng Jiang is a law unto herself, a fierce warrior who wants nothing more than to see the Han dynasty fall – no matter what the cost.

As Zheng Jiang you must stay on the offensive – sitting back and relaxing is not something you can do as part of her campaign.

Zheng Jiang is for players who want the challenge of striking out against the status quo, tearing through the realm on a tide of infamy that must not stop until you succeed.