Our next warlord is Zhang Yan, the Soldier of Fortune.

Zhang Yan, the Soldier of Fortune 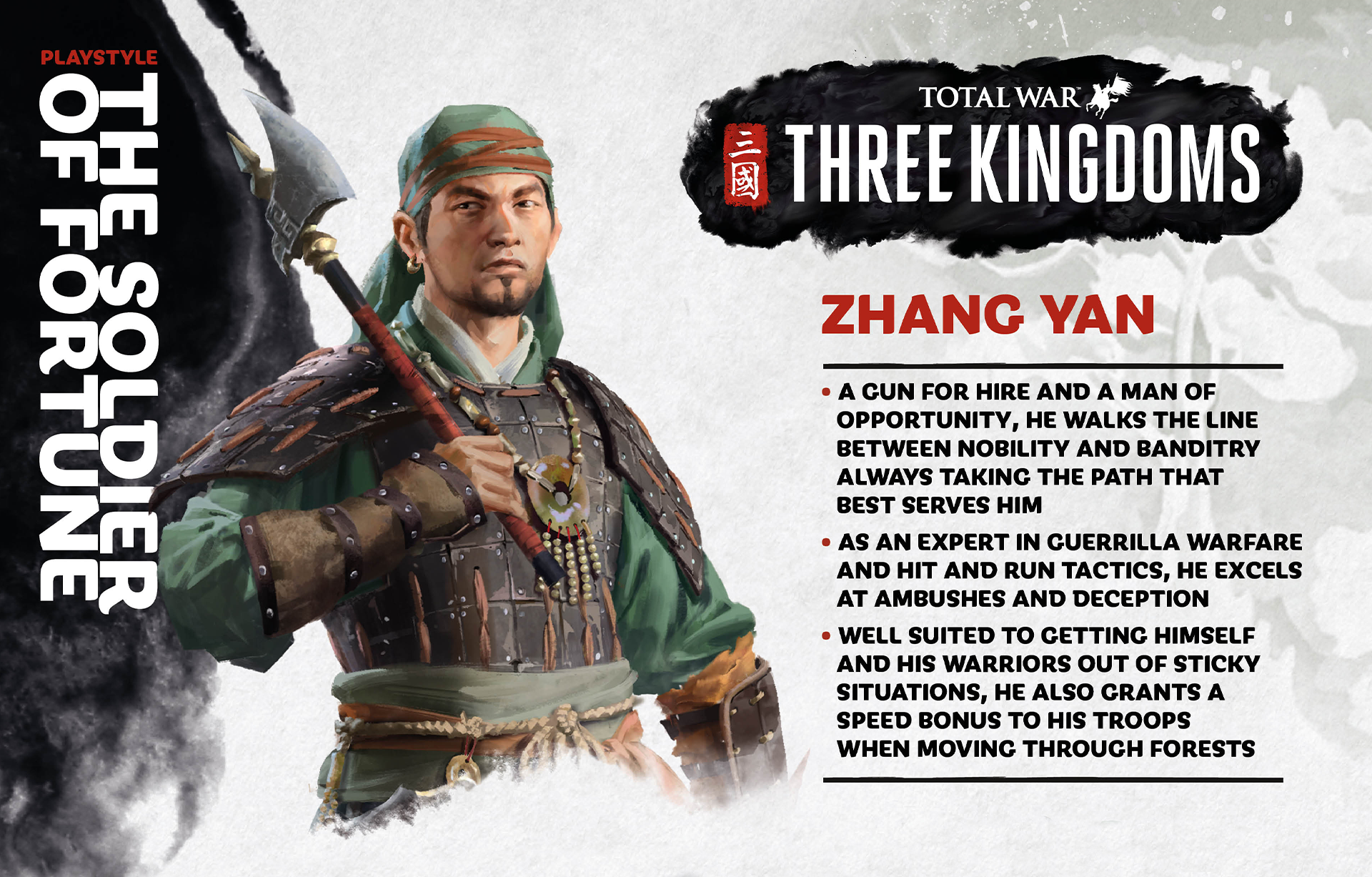 Not much is known of Zhang Yan’s early life. Born Chu Yan in Changshan Commandery, he was nicknamed “Flying Swallow” by his men due to his speed, agility, and bravery.

In 185CE, Chu Yan raided the town of Yingtao with fellow bandit leader Zhang Niujue. Zhang Niujue was killed in the assault, but before dying he ordered his men to take Chu Yan as their new leader. In order to honour Zhang Niujue, Chu Yan changed his family name to Zhang.

Although Zhang Yan’s background is one of banditry, making him an enemy of the state, his sole motivation is personal gain and he will happily integrate into the Han Empire elite if it furthers his pursuit of riches. Because of this, Zhang Yan leads his faction with the idea that loyalty is something always up for negation. At the drop of a hat he is willing to switch allegiance to the highest bidder, particularly if he feels that will help him increase his holdings and control in northern China. A man driven by a thirst for power and riches, he believes that words like honor and duty are excuses thrown around by lesser men when they are unable to achieve their desires.

Between the light of the civilised Han, and the chaos of opportunistic banditry, Zhang Yan straddles the twilight – he sees the carnage wrought by Dong Zhuo and wonder how this can be turned to his advantage. To attack the Black Mountain bandits is to invite deception and ambush, as they have mastered the art of war unseen. Yet all the same, Zhang Yan will form alliances and friendships with any who will serve his interests – be they high-born or mud-stained…

Zhang Yan’s rich history of guerrilla warfare and hit and run tactics means he excels at ambushes and deception. He also grants a speed bonus to troops loyal to his faction when moving through forests, meaning he’s well suited to getting himself and his warriors out of sticky situations.

Above all, Zhang Yan offers some pretty challenging gameplay, and is arguably one of the hardest warlords to play as. The primary difficulty comes from his geographical position which, while defendable, is also hard to break out from – especially when he’s surrounded by such powerful warlords as Yuan Shao and Gongsun Zan. Without a wife or children behind him, establishing a family and furthering Zhang Yan’s dynasty is also more difficult, with his success highly dependent on finding the right allies.

This means that Zhang Yan typically works best as a supporting character in the early-mid game, backing another more powerful warlord with their claim to the throne, while also growing his own strength in the meantime. Then, when the time is right, he can exploit that warlord’s weakness and claim power for himself. As his alliances at the outset of the campaign are yet to be defined, with that comes a strong degree of freedom to choose whose claim to the throne you may wish to support.

This fluid view on allegiance also means that Zhang Yan’s faction is the only one able to engage in diplomacy with the Yellow Turbans, thanks to the connections afforded to him via his unique Black Mountain Hideout. However, he can just as easily align himself with the Han empire, or strike out on his own. Zhang Yan’s alliances are mercurial, and his alignment can easily change over time to suit his purposes. 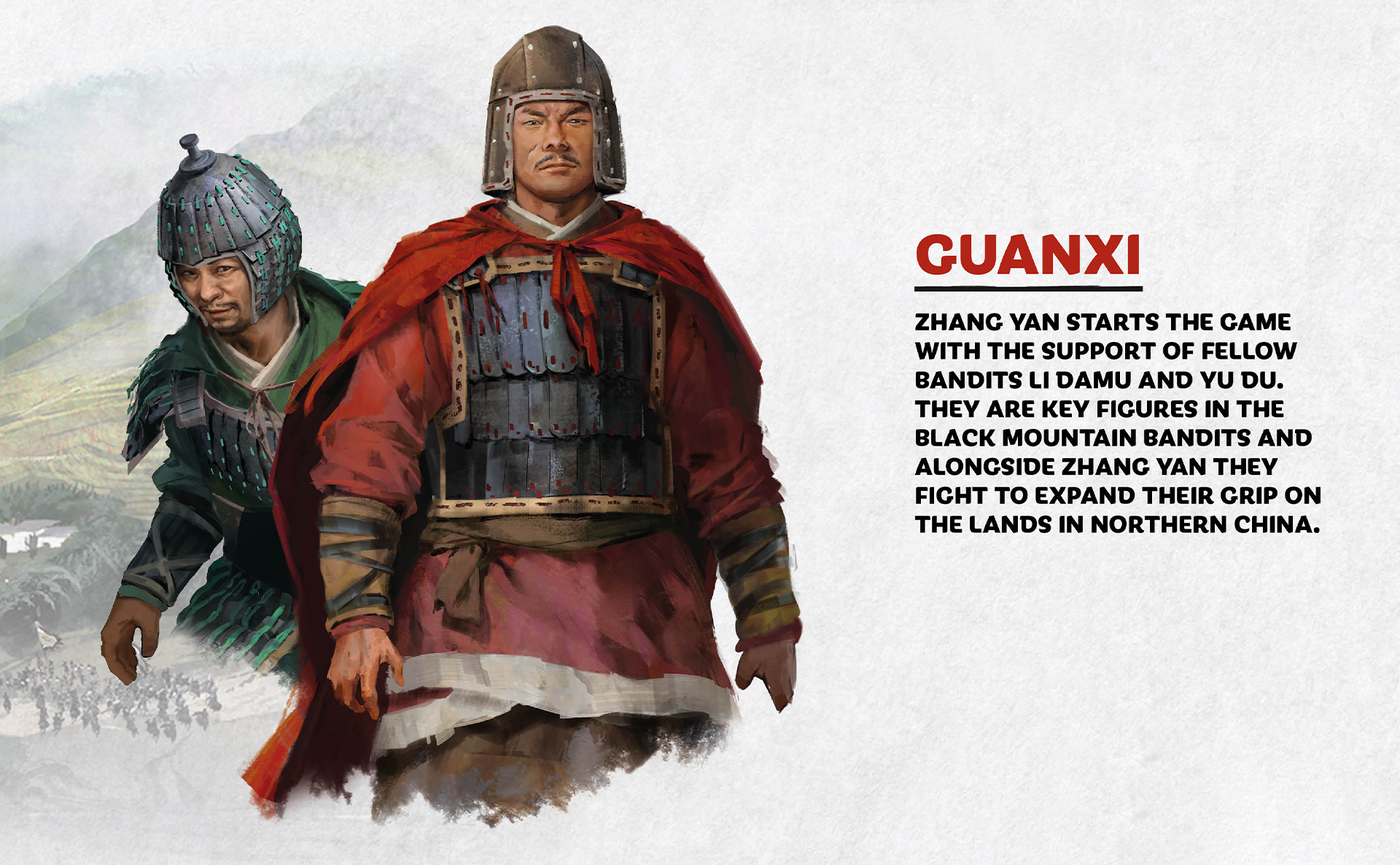 Zhang Yan starts the game with the support of fellow bandits Li Damu and Yu Du. They are key figures in the Black Mountain bandits and alongside Zhang Yan they fight to expand their grip on the lands in northern China.

At the start of the game, Zhang Yan is situated in the far northern Yanmen Mountain Commandery. Surrounded by powerful warlords, Zhang Yan needs to fight his way through and raid the surrounding northern territories in order to build up his strength for the tough battles ahead. 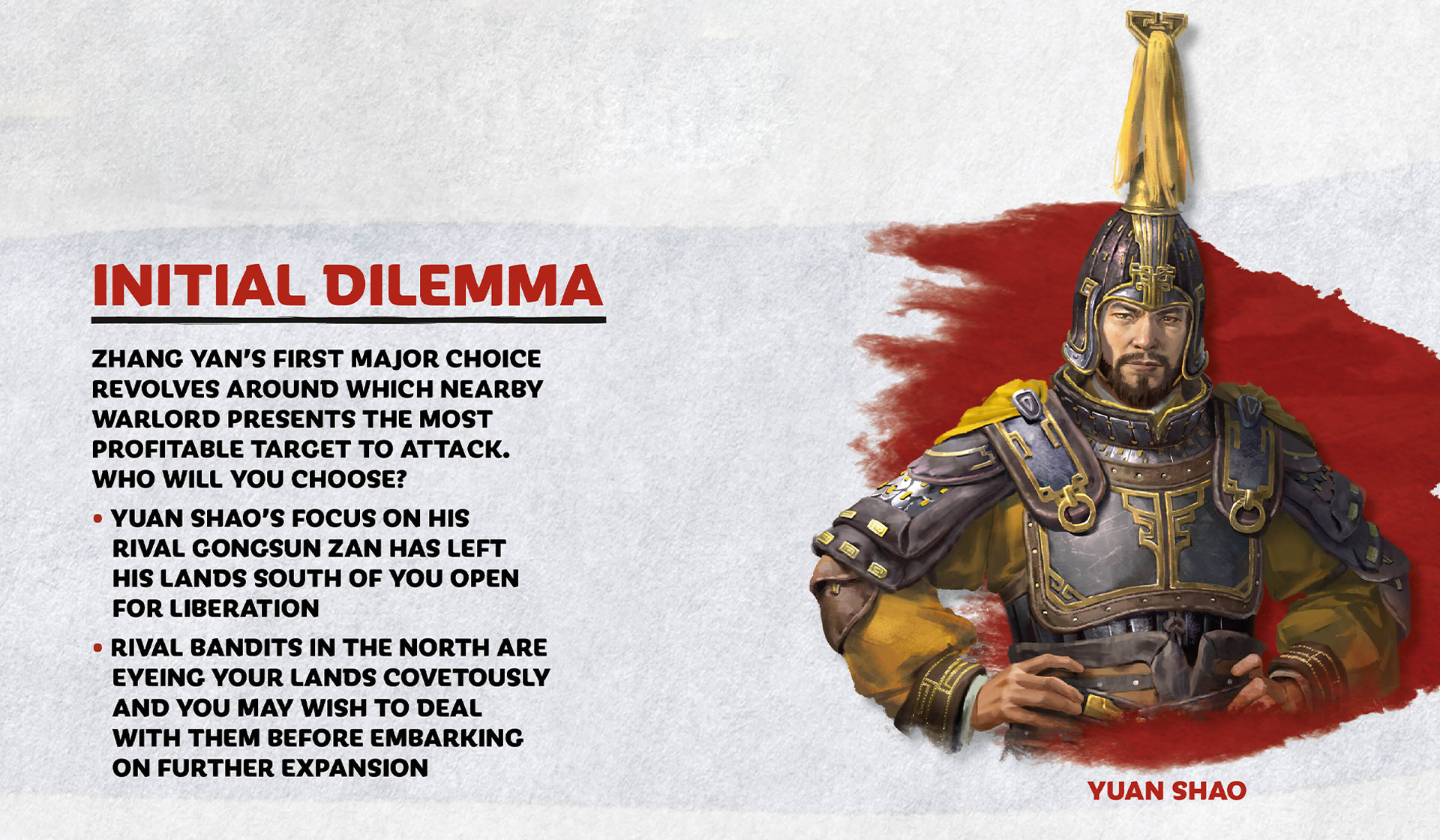 Zhang Yan’s first major choice revolves around which nearby warlord present the most profitable target for him to attack. With Gongsun Zan and Yuan Shao warring in the plains to the south-west of him, it’s the perfect opportunity to liberate some land from Yuan Shao, and that’s the choice he made historically.

Alternatively, Zhang Yan can instead focus on fighting for supremacy in the mountains, and declare war on any rival bandits in the north who have already been eyeing his own lands covetously. With the mountains providing a secure base, Zhang Yan can easily launch raids into the surrounding lands in all directions.

Zhang Yan’s position in the mountain allows his campaign to unfold in a number of different ways. Perhaps his most obvious path is to expand into the plains to the south, where he will inevitably get drawn into conflict with Yuan Shao.

However, he can also try to expand westwards, in the arid lands of north-west China. While this option offers him relative security (as mountains post quite a significant obstacle), further expansion could be tricky as the tyrant Dong Zhuo will be one of his neighbours.

Finally, Zhang Yan can choose to stay in his native mountains and build up these rocky commanderies in relative peace, otherwise choosing to head south towards the burned ruins of Luoyang.

A key part of his progression from there is finding the right warlord to partner up with in return for protection and support. A couple of strong contenders and his historical choices where Cao Cao and Gongsun Zan, but there are a whole host of options available depending on how you decide to expand his initial holdings. Of course, you could also decide to go it alone and forge your budding empire solo, but without the backing of a power player early on, it definitely won’t be easy.

What kind of player is Zhang Yan for?

Zhang Yan is an underdog and a man of opportunity, hovering between nobility and banditry and taking the path that best serves him. Without status or promise behind him, he must fight for renown among some of the era’s most iconic heroes. Zhang Yan’s campaign is for players who want to triumph against the odds and don’t mind having a few tricks up their sleeve to turn things in their favor.