Our next warlord is Yuan Shu, the Pretender. 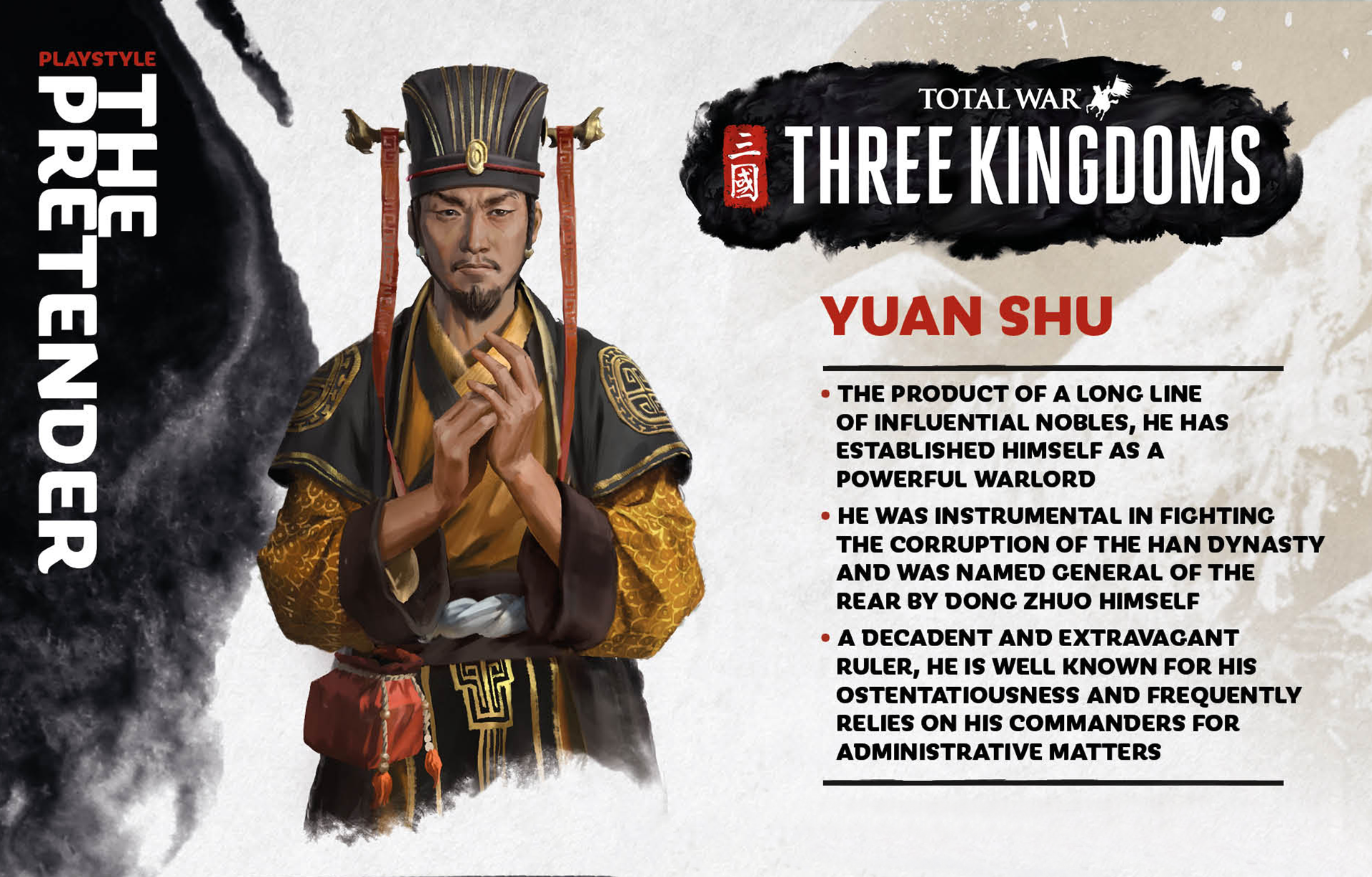 The product of a long line of influential nobles, Yuan Shu has established himself as a powerful warlord. Originally known for his courage and valour, Yuan Shu was a great hunter and falconer in his youth, climbing through several government ranks including General of the Household Rapid as a Tiger.

As time progressed, however, he was known more for his ostentatiousness. He was not a great administrator himself, and so relied on commanders such as Sun Jian to oversee his forces.

Yuan Shu was instrumental in fighting back against the corruption of the Han dynasty – and was named General of the Rear by Dong Zhuo himself. However, when Dong Zhuo took over the capital, Yuan Shu established a base at Luoyang and allied himself with a group of other warlords in order to oppose him.

In retaliation for his betrayal, Dong Zhuo killed Yuan Shu’s father, thus also sparking Shu’s ongoing conflict with half-brother Yuan Shao as the two battled to assume leadership of the family in the aftermath.

After he conquered Nanyang, Yuan Shu placed Sun Jian in charge of his army, who then proceeded to repeatedly crush Dong Zhuo’s forces. Yuan Shu, meanwhile, continued to act as hegemon of Nanyang, cementing his reputation as a decadent and extravagant ruler.

Despite this success, following Dong Zhuo’s retreat from the capital Yuan Shu’s animosity towards Yuan Shao grew. Yuan Shu and his ally Gongsun Zan fought Yuan Shao for some time but were ultimately defeated.

Following the death of his envoy Han Yin at the hands of Lü Bu, Yuan Shu launched another large-scale invasion of Xu Province. Unfortunately for Yuan Shu, the attack failed miserably, decimating his army and leaving his opponents to take advantage of this weakness. It was Cao Cao who eventually attacked and destroyed Yuan Shu’s kingdom, with Yuan Shu fleeing to a small village where he later died of illness.

Yuan Shu’s playstyle is primarily focused on managing his legitimacy and claim to be emperor.

While he can progress through the ranks in the same ways as most factions, he has the unique ability to demand support of his legitimacy. This means that, if another faction leader accepts Yuan Shu’s claim, it will grant Yuan Shu a significant amount of legitimacy.

High levels of legitimacy not only provide higher income but also a large amount of extra prestige, which will accelerate Yuan Shu’s progression through the ranks.

Legitimacy must also be spent on recruiting new characters into Yuan Shu’s faction – without others accepting his legitimacy, Yuan Shu will have trouble finding allies willing to join him.

Aside from legitimacy, Yuan Shu’s other key focus is on commerce and industry. As faction leader, Yuan Shu provides a significant bonus to these income types, so it can be worthwhile to focus on these while he is at the helm.

Characters in Yuan Shu’s faction also have access to a unique assignment that requires some financial investment up front but then provides a significant bonus to income over time. 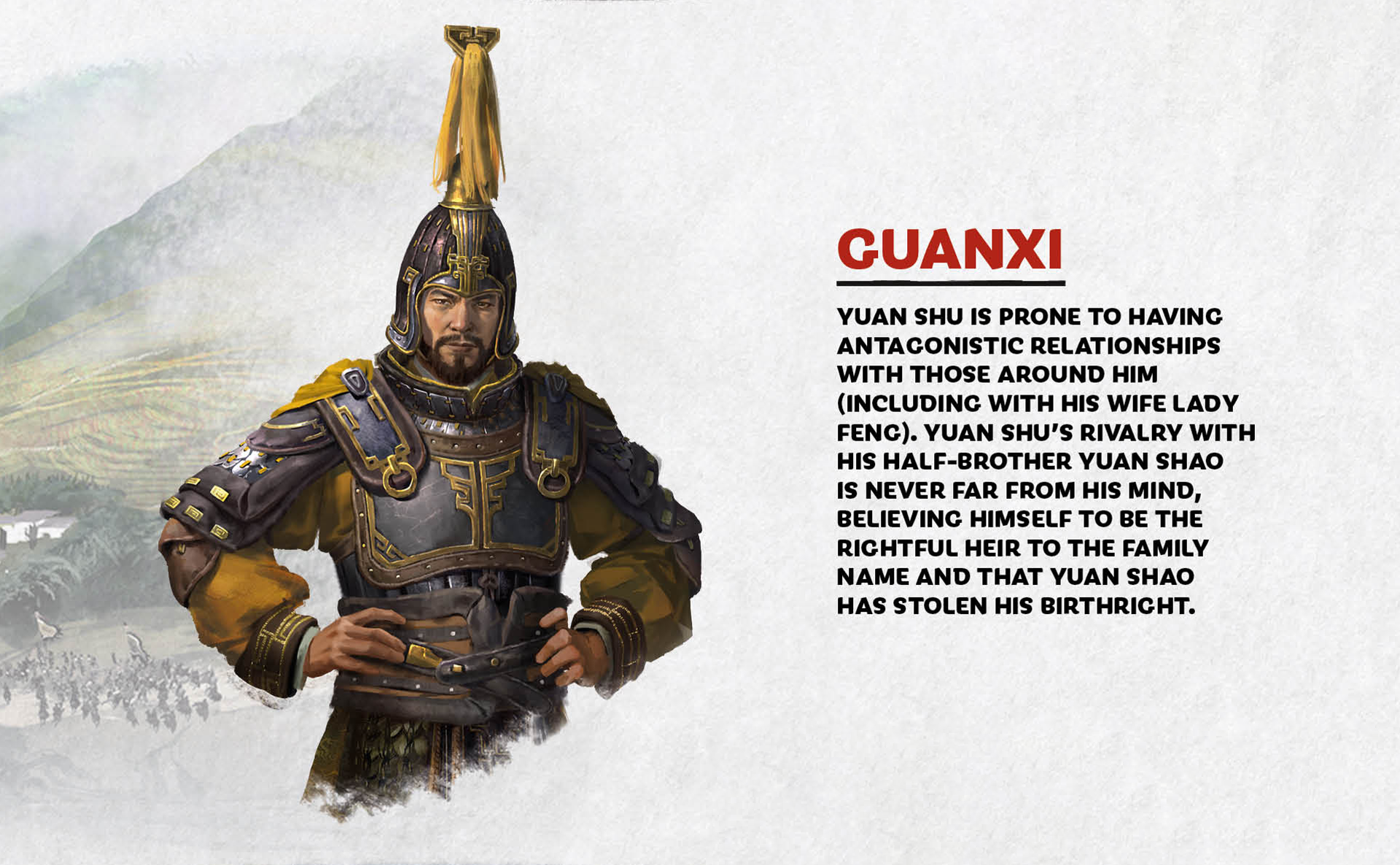 Yuan Shu is prone to having antagonistic relationships with those around him (including with his wife Lady Feng).

Yuan Shu’s rivalry with his charismatic half-brother Yuan Shao is never far from his mind. Believing himself to be the rightful heir to the family name and that Yuan Shao has stolen his birthright, Yuan Shu is intent on proving his superior worthiness.

Yuan Shu’s starting position is one of great opportunity but also precariousness – his campaign has one of the most difficult starts in the game.

Situated next to the formidable Liu Biao, Yuan Shu’s territory is also within striking range of Dong Zhuo’s forces – who is certainly likely to lash out at Yuan Shu early on. Additionally, to the east lies Cao Cao, an opponent with whom the chance of friction is high.

Surrounded by powerful and ambitious warlords with few allies to hand, playing as Yuan Shu is a very challenging experience that requires initial caution followed by sufficient boldness to carve out a strong position as the campaign progresses. 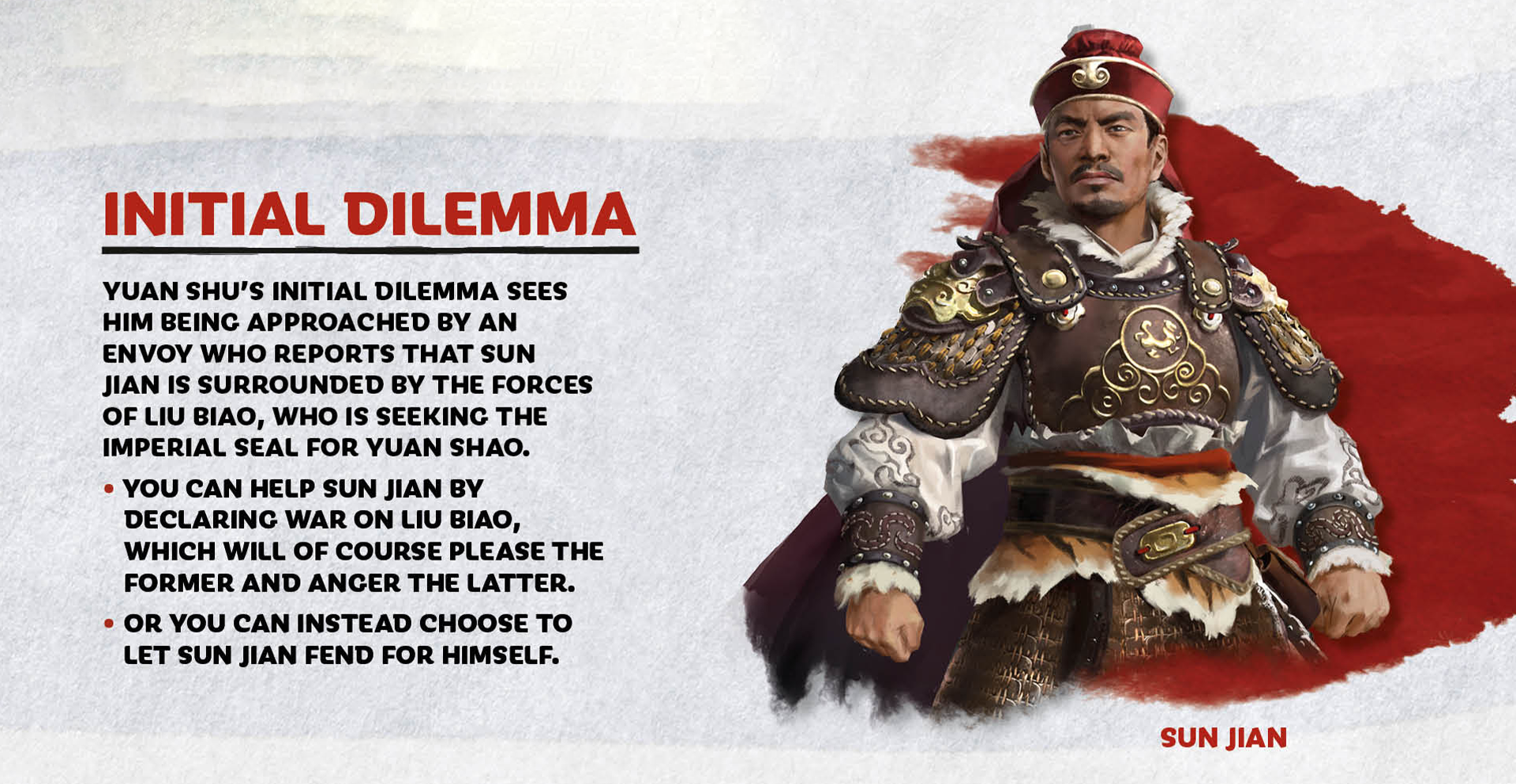 Yuan Shu’s initial dilemma sees him being approached by an envoy from Sun Jian. The envoy reports that Sun Jian is being beset on all sides by the forces of Liu Biao, who is seeking the Imperial Seal in the name of Yuan Shao.

You can decide to help Sun Jian by declaring war on Liu Biao – which will of course please the former and anger the latter – or you can instead choose to let Sun Jian fend for himself.

Yuan Shu’s overarching aim is to become emperor, but to begin with Yuan Shu must focus on stabilising his power base against Dong Zhuo and Liu Biao while also building an alliance against Yuan Shao.

Ultimately, Yuan Shu will have to dominate the south (in strong opposition to Sun Jian), the east (versus Cao Cao), or the west (against Dong Zhuo and Liu Biao) – and none of these options are easy.

However, the areas surrounding Yuan Shu’s starting position, while not necessarily immediately wealthy, can lead to a strong economy with plenty of commerce and industrial resources as well as farmland if properly turned to his advantage.

What kind of player is Yuan Shu for?

Yuan Shu is for players who want a challenge from start to finish, as well as those enjoy being a scheming powermonger who hustles others into accepting their legitimacy and supremacy.

With the lofty goal of becoming emperor dominating his playstyle, and potential enemies on all sides, Yuan Shu’s campaign requires steely nerves and a careful balance of both caution and decisiveness when the need arises.