Our next warlord is Yuan Shao, the Alliance Leader. 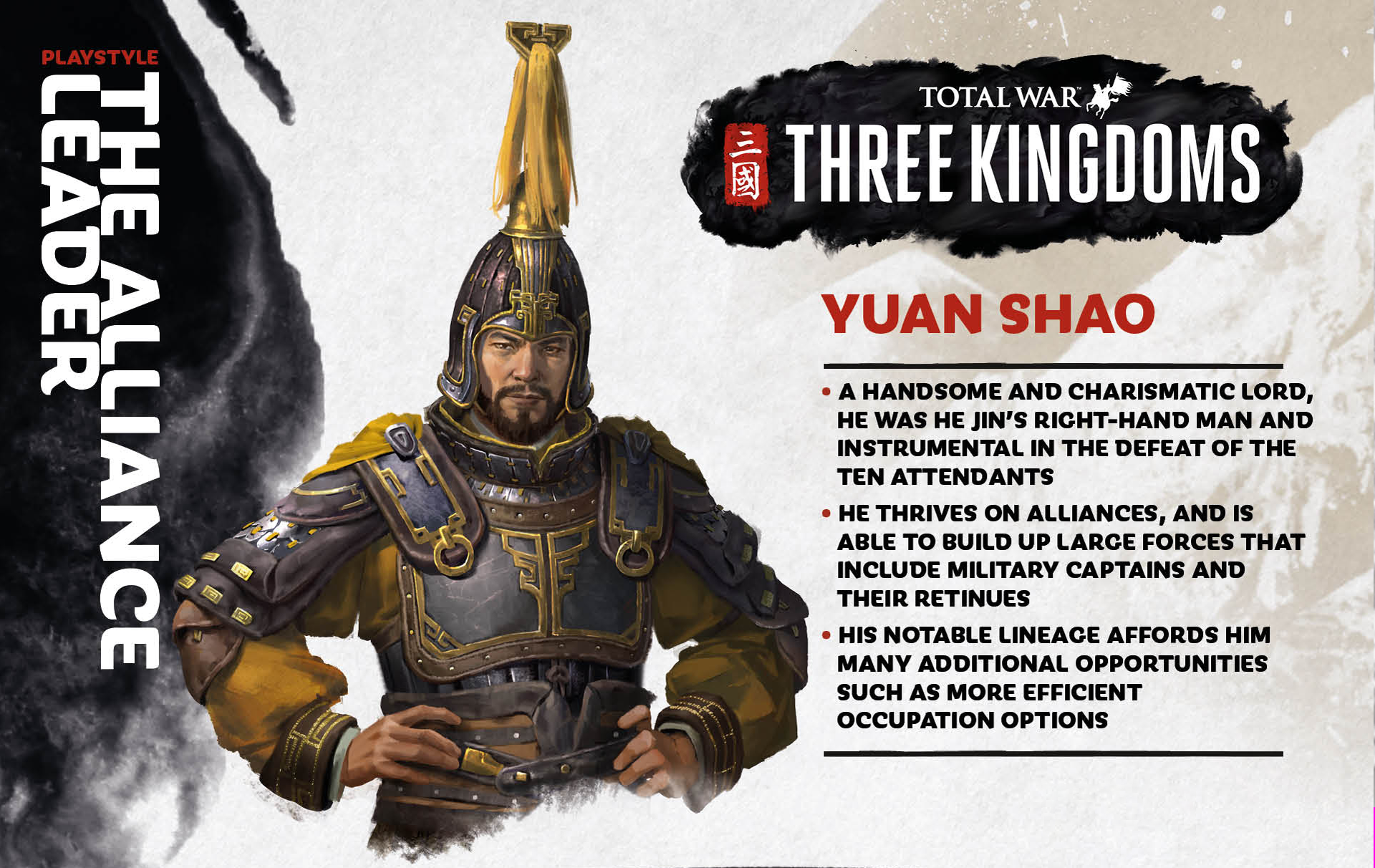 A handsome and charismatic lord, Yuan Shao was He Jin’s right-hand man, and instrumental in the defeat of the Ten Attendants.

He resisted Dong Zhuo’s attempts to get him on board with his plans to dethrone the current child emperor and replace him with an even younger, more malleable alternative, opening up a rift between the two of them.

Yuan Shao was then pressed by Cao Cao to call all able-bodied men to join a coalition against the tyrant, joining him in protesting Dong Zhuo’s military takeover of the capital. When Yuan Shao and his allies drafted troops to fight against Dong Zhuo, the tyrant attempted to make peace with him – only for Yuan Shao to slay several of the envoys that came to greet him.

With Emperor Xian as Dong Zhuo’s puppet, Yuan Shao and Han Fu sought to establish Liu Yu as emperor in his place – a proposal that was abandoned due to the objections of Liu Yu himself.

Yuan Shao is descended from power and prestige. His great grandfather Yuan An is well-known for having built the lofty Yuan dynasty, while his grandfather Yuan Tang is a high-ranking minister of the Han dynasty. However, his father Yuan Feng is something of a controversial figure, with rumours suggesting that Yuan Shao may not actually be his son at all.

Yuan Shao is a charismatic and noble leader of men whose appeal to the common soldier cannot be underestimated. His unique ability to recruit retinues that are led by a military captain and not by a commanding general provides him with a way to quickly bolster his forces, and as long as he is the faction leader he will also benefit from a reduction in these retinues’ cost.

It is primarily his lineage that is the driver of Yuan Shao’s significant charisma and influence. Yuan Shao gains lineage when he is in alliances or coalitions, and if the faction leader is leading armies in the field. Bringing characters into his faction means that he must pull some strings and make promises based on his nobility, effectively expending this currency. Yuan Shao can also use his lineage to more effectively pacify captured settlements. Notably, Yuan Shao is one of the few characters able to forge alliances right at the start of the game – only his half-brother Yuan Shu can do this as well.

All this means that Yuan Shao is best suited to focusing on alliance gameplay, so always making sure to care about your diplomatic relationships, and to be involved with as many factions as possible while also building up large forces comprising military captains and their retinues is a wise choice. 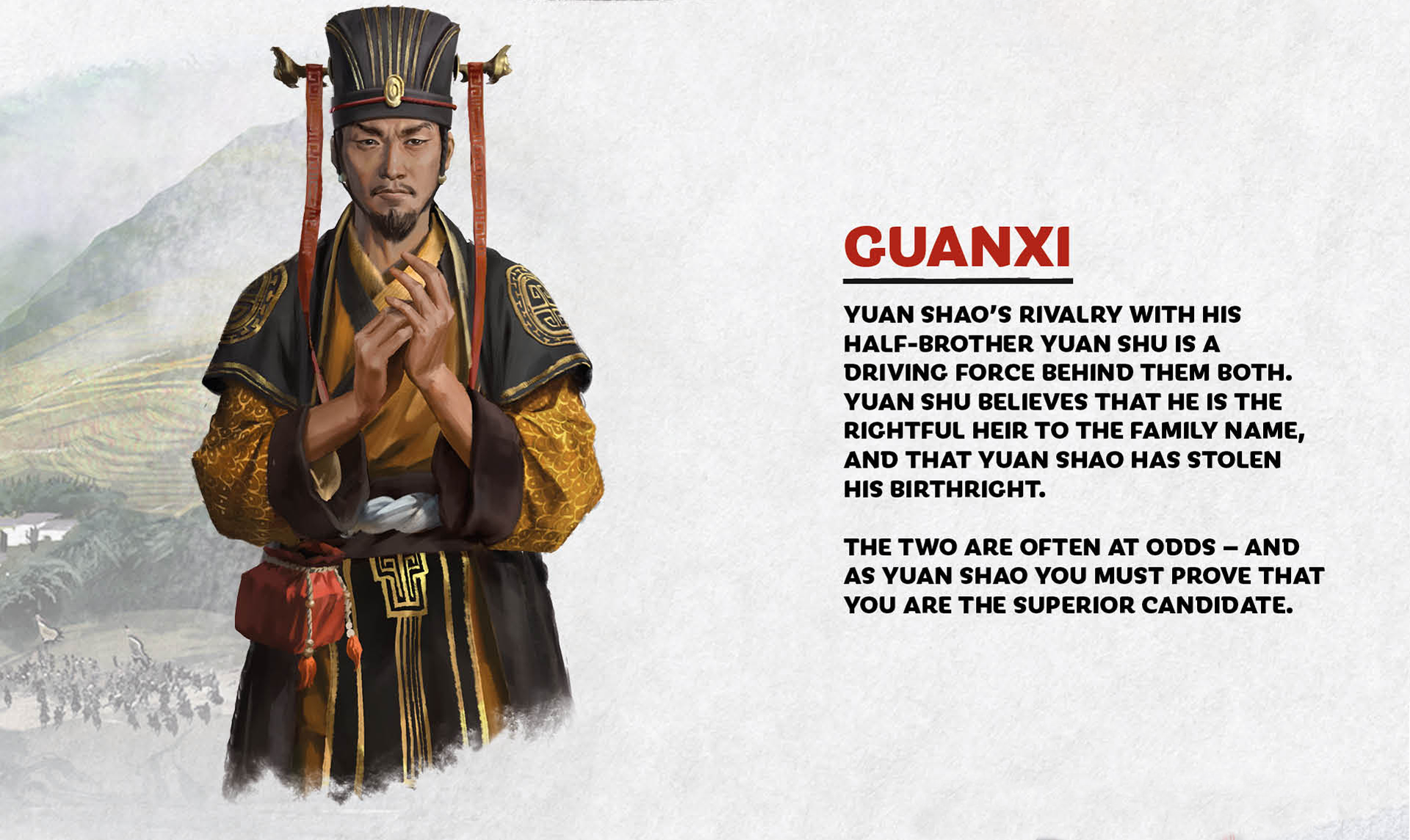 Although Yuan Shao is a charismatic leader of soldiers, he struggled to gain the appreciation of comrades on equal footing.

Nevertheless, Wen Chou and Yan Liang have been with Yuan Shao since the very beginning. His two best generals and formidable warriors, they make an excellent team.

Yuan Shu believes that he is the rightful heir to the family name, and that Yuan Shao has stolen his birthright. The two are often at odds – and as Yuan Shao you must prove that you are the superior candidate.

Although the coalition against Dong Zhuo has since broken down, this is the perfect situation for Yuan Shao – there are many advantageous new alliances to be made.

Yuan Shao’s starting location is also a relatively safe one that gives him the option to swiftly unify the Wei Commandery.

With plenty of farmlands and agriculturally rich provinces within relatively easy reach, Yuan Shao has lots of resources to draw on in order to forge a strong foundation for a thriving realm. 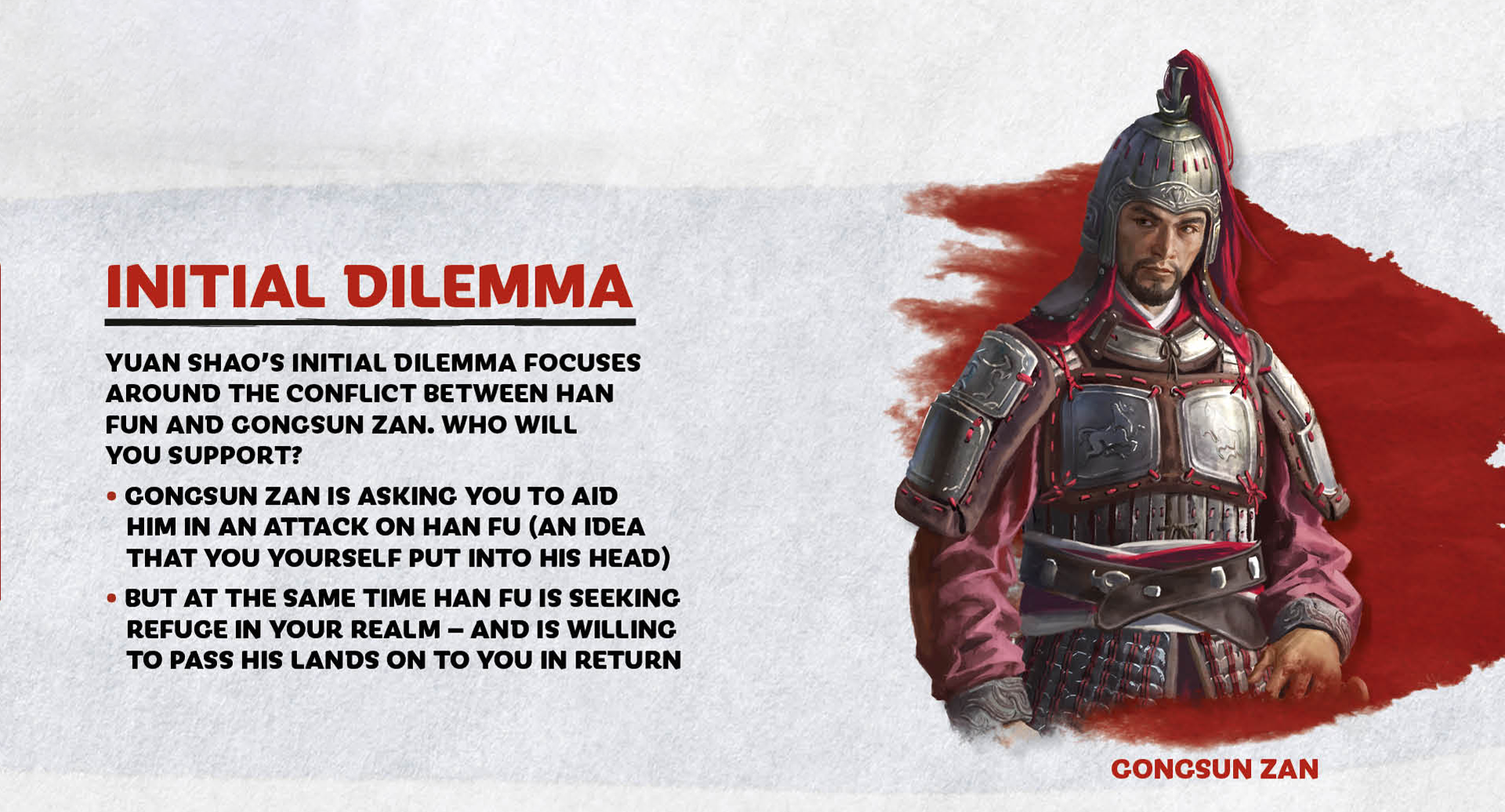 You were able to convince Gongsun Zan about attacking Han Fu, so he is now asking you to aid him in this attack, but at the same time Han Fu is seeking refuge in your realm – and is willing to pass his lands on to you in return.

It falls to you whether to stand by your promise to Gongsun Zan and declare war on Han Fu (thus improving your relations with the former) or to use this opportunity to increase the size of your realm by taking Han Fu into your fold, confederating his faction in yours (which will understandably upset Gongsun Zan).

Yuan Shao is in a good position in the early game, with the numerous fertile and profitable commanderies within reach enabling him to forge a pretty powerful kingdom in these lands.

Most of his initial neighbors are relatively minor factions, who can be easily conquered to further increase Yuan Shao’s power.

However, once he’s laid down the foundations for a sturdy power base, Yuan Shao must expand – an endeavor that could benefit from setting about conquering everything north of the Yellow River.

Things get a little more difficult for Yuan Shao when the mid game rolls around after all the minor factions have been snapped up, especially as he will often find himself sandwiched between major players such as Gongsun Zan, Cao Cao, Dong Zhuo, and his half-brother Yuan Shu.

Yuan Shao’s ultimate aim is to become the emperor, a goal that will require all of his strength and mastery to fulfill.

What kind of player is Yuan Shao for?

As the leader of the coalition, the charismatic Yuan Shao will appeal to players with diplomatic flair who want to focus on alliances and political maneuvering. His ability to field military captains as leaders of retinues enables him to build strong forces without the necessity of controlling the satisfaction and loyalties of his generals.

Powerful and ostentatious, Yuan Shao is for those who know they’ll make an excellent emperor.