Our next warlord is Ma Teng, the Loyalist. 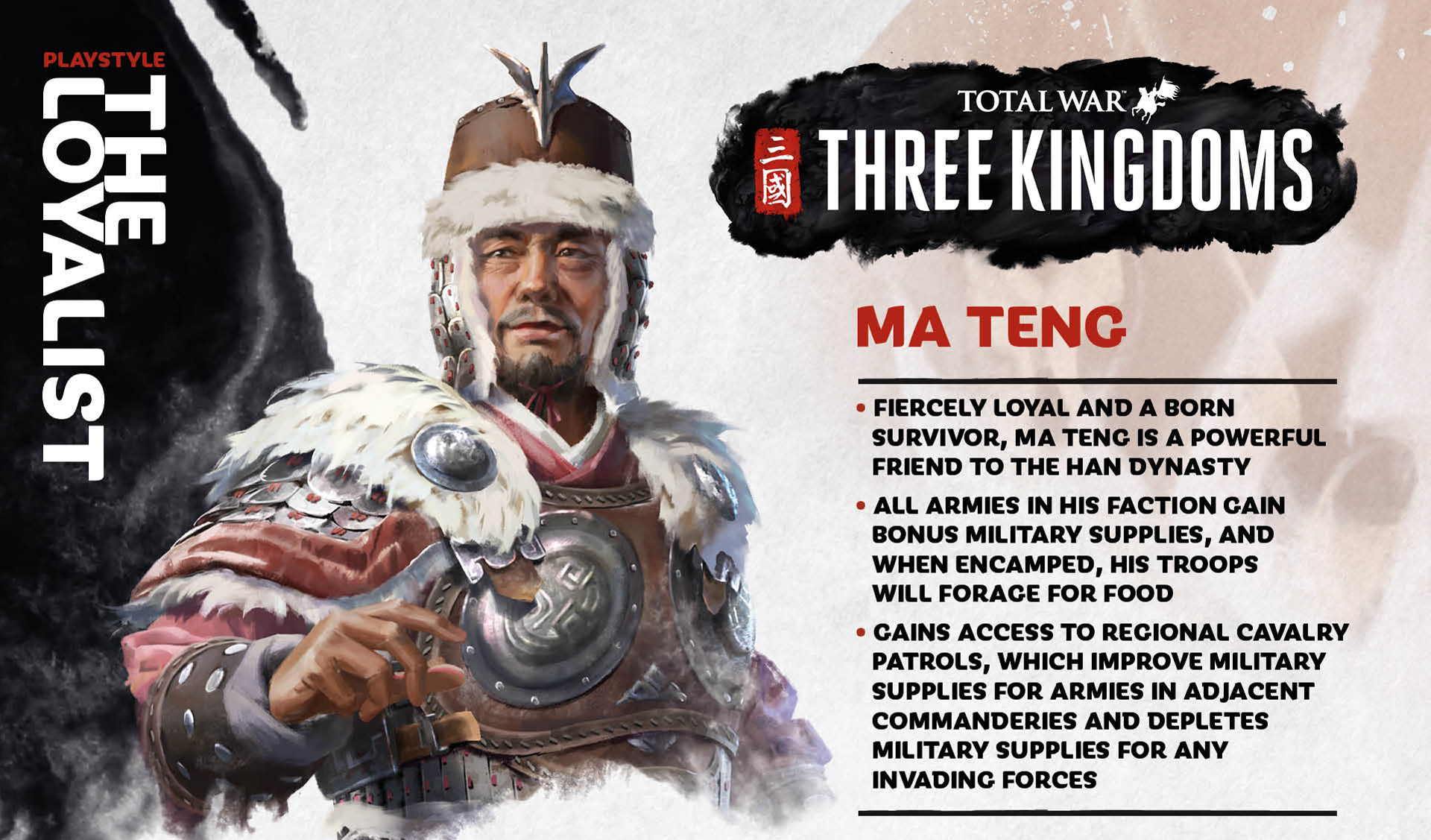 Although the exact details of Ma Teng’s birth are up for debate, many believe he was born in 156CE in Maoling County (Fufeng Commandery). His father, Ma Ping, was once an esteemed officer of the Han Empire, but he was dismissed from his post after a mysterious dispute. Ma Ping then went to live among the Qiang tribes in Northern China, married a local woman, and fathered Ma Teng. Ma Teng’s early life was one of great poverty. In his youth he was put to work selling firewood he collected from the mountains to help his family make ends meet.

He grew up to be an accomplished warrior, and when the Qiang tribes rebelled he enlisted in the Han army to secure the rule of the Han government. His significant martial prowess shone through, and when the rebellion was suppressed, he was granted the title of officer in the Han Empire. It was during this campaign that he met and became great friends with Han Sui, and together they now control much of Liang Province.

Rising from nothing to a position of power and wealth because of the support of the Han Dynasty, he is keen not to see it fall to pieces. While many others have broken their oaths of fealty, with the echoes of his father’s disgraceful removal still hanging in the air, Ma Teng is keen to avoid the same fate and bring further shame to his family.

Even as the storm of chaos rolls and thunders over Luoyang, Ma Teng does not let the squalls of the court cloud his mind. Though many say the dynasty is finished, Ma Teng remains loyal to the Han, prosecuting the enemies of the emperor above all else. On the western fringes of the empire, he has long defended China’s most valuable trade routes, holding back hostile interlopers, and will continue to charge into battle in the emperor’s name.

Ma Teng may treat his friends well, but he remains merciless with Han’s enemies. He was made General of the West and was persuaded, along with Han Sui, to aid Dong Zhuo in battling against the coalition that formed against him.

Ma Teng is hardy, and able to survive in many difficult situations and adverse environments. He also keenly understands the importance of military logistics. All armies in his faction gain bonus military supplies, and when encamped, his troops are trained to forage for food. Meaning his armies are strongly equipped to push forward, continue on the front foot, and support a strategy of aggressive expansion.

Ma Teng’s faction can also construct the unique Xiliang Supply Lines building chain – one of the few food-production chains that can be built in Commandery capitals. This chain also institutes regional cavalry patrols, which improve the military supplies for armies in adjacent commanderies and depletes the military supplies of any invading forces. Ma Teng also benefits from his close connection to the Silk Road, gaining increased income from silk and spice.

One key differentiator of his playstyle is that he is the only playable faction at the start of the game that is allied with the tyrant Dong Zhuo. Ma Teng is incredibly loyal to the Han dynasty and its regime, so he will support Dong Zhuo as the nominal chancellor of state. He now fights against Dong Zhuo’s enemies because of it. He’s not necessarily on great terms personally with Dong Zhuo, but he is willing to put that to one side in order to do his duty and fight for the Han empire. 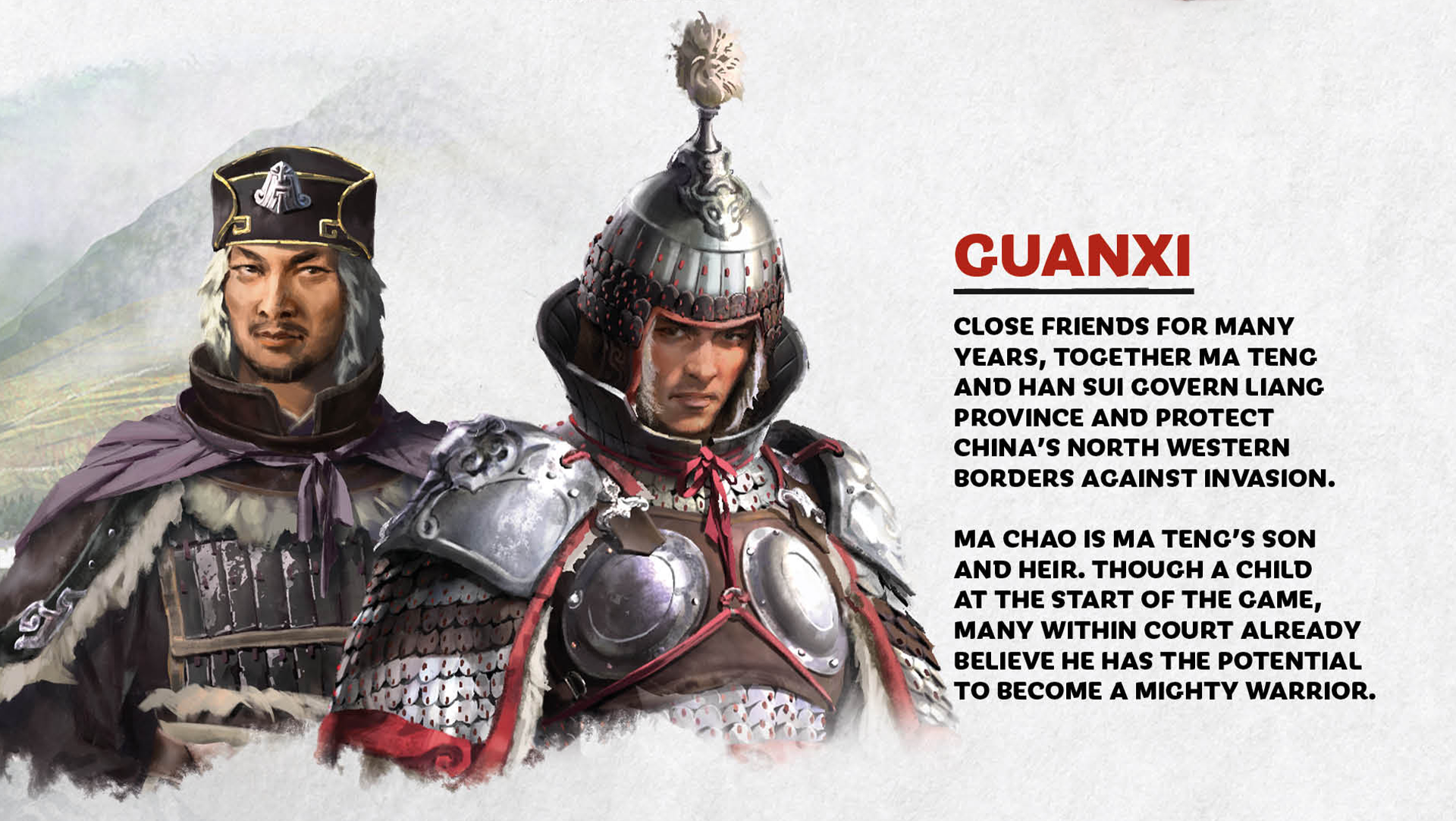 Close friends for many years, together Ma Teng and Han Sui govern Liang province and protect the China’s north western borders against invasion. Their tight-knit bond and focus on a strong military alliance goes a long way to ensuring stability in the region.

Ma Chao is Ma Teng’s son and heir, though at the outset of the campaign he is still a child. It will be a few years before he comes of age, but many within court already believe he has the potential to become a mighty warrior.

At the start of the game, Ma Teng is at war with the Yellow Turbans in Wudu commandery. The player will have to conquer the entire commandery to gain a strong foothold in the west. Once the rebels in the area have been dispatched, Ma Teng will have to decide whether to drive his conquest south across the mountains or fight for control of the north-west alone.

Ma Teng’s dilemma triggers if/when Dong Zhuo meets his end. Without their tyrannical leader, Dong Zhuo’s faction will splinter as a civil war breaks out between the loyalists and the separatists. This leaves Ma Teng with a major choice. Does he join the conflict and open himself up to a huge war right on his doorstep? Or does he avoid bloodshed and leave Dong Zhuo’s riven faction to its own fate? The former provides him with the opportunity to rescue the child-emperor from the flames of war. But the latter allows him to focus on expanding his holdings elsewhere, biding his time only to strike later on.

Depending on how your campaign has progressed at this point, a huge war might be exactly what you’re looking for. But war is never without risk, and you must decide which route to take as you fight to bring harmony back to the Han empire.

In the early stages of the campaign, Ma Teng will need to defeat the rebels in his home commandery of Wudu, and unify it by capturing all settlements.

As Ma Teng’s campaign progresses, multiple potential paths will become apparent. You could begin expanding southwards into Hanzhong. You might choose to follow history, fighting for supremacy in the north-east by pitting Ma Teng against his former friend Han Sui. Or perhaps challenge Dong Zhuo directly by declaring war against him. Alternatively, Ma Teng can wage war with the enemies of the Han further west, or spend time gathering the support of other warlords in order to strike against Dong Zhou later.

Your ultimate aim is to build a great realm in the north-west of China, creating your own Dynasty and pushing forth to unite all of China under your rule. The allies and enemies you make during your campaign will have a key role in shaping your pursuit of that goal.

What kind of player is Ma Teng for?

Ma Teng is a born survivor. He’s well equipped to withstand the harsh conditions of the arid plains, mountainous regions and the deep jungle. But above all, Ma Teng is driven by loyalty. He’ll fight any faction who challenges the authority of the Han Dynasty, regardless of their motives. If loyalty matters to you, then Ma Teng is the perfect warlord.