In Total War: THREE KINGDOMS players step into the shoes of one of 11 legendary warlords in this age of glorious conquest. Although the ultimate goal for each leader is the same: unite China under your banner and forge the next great dynasty, the preferred means and methods can differ greatly. Every warlord has their own unique personality, motivations, and experience, while all shape the way they play and the kind of conquest they favour.

With such an iconic and varied cast available, each campaign starts with an important choice, which of these heroes, villains, or murky-shades-of-grey types do you want to lead to glory?

Our next warlord is Cao Cao, the Puppet Master. 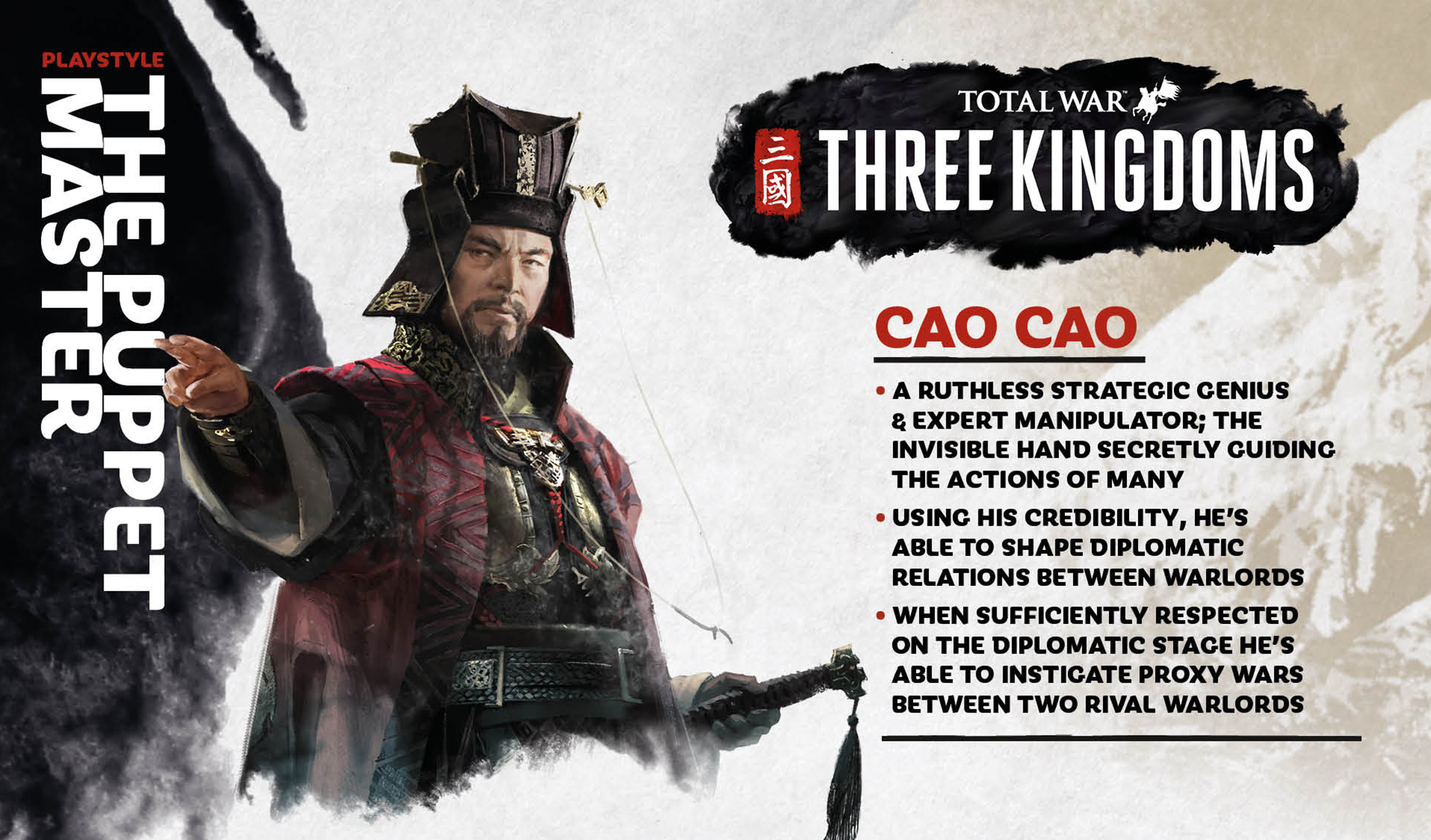 Cao Cao is a brilliant strategic commander, excelling in war and politics. His main strength lies in diplomatic exploitation. He divides and conquers, manipulating relationships between factions by spreading rumours of disunity between them. This can fray their relations to the point where war is all but inevitable. Of course, Cao Cao can also influence relationships to forge stronger bonds between warlords. He’s an excellent melder of emotions and can make others think more positively of himself or his allies, allowing him to get better diplomatic deals from those targeted.

Playing as Cao Cao is all about long-term strategic planning; preparing for war far in advance by setting the diplomatic stage to strike, while expanding your realm slowly but steadily. His agricultural garrisons help to make his farms more defendable and give stronger boosts to his armies.

These unique abilities can be taken even further. With Cao Cao’s faction, you can instigate a proxy war between two warlords. In desperate times when swift action is needed, rather than making two factions like each other less and hoping they might go to war – you can directly trigger it without anyone knowing it was your doing. Because of this, you can conceivably win the game without ever being involved in any major conflicts. By systematically driving factions against each other, by manipulating others into attacking him and calling his allies to defend him, and by later confederating or vassalising the fractured remnants of once-great factions, Cao Cao can grow in territory and power without fighting a single battle.

Cao Cao was born in 155CE in Qiao county, Han Empire. His father Cao Song was a foster son of Cao Teng, one of the favoured eunuchs of Emperor Huan. It is said that Cao Song’s original family name was Xiahou. This makes Cao Cao related to two of his most trusted generals, Xiahou Dun and Xiahou Yuan. His family was closely intertwined with politics, and Cao Cao studied hard, maturing into a powerfully cunning and shrewd statesman in his own right.

Cao Cao has seen emperors fall and tyrants rise, he has witnessed power grasped by the undeserving, and it is this world of chaos through which he plots a path to order. Regarded as a strategic genius, Cao Cao pursues victory at any cost, and ensures that the ends always justify the means. Though some call him ruthless, he is nevertheless mindful and considerate, maintaining agricultural garrisons to protect both his supplies and his people during troubled times.

Ingenious and merciless, he’s known as the Puppet Master and has no qualms in controlling others to fulfill his aspirations. He is a leader who dedicates himself to his ambitions and possesses a unique mindset. Caring little for status or hidebound tradition, he judges men solely on their achievements and skill, and his companions respect him for this reason. Gainsaying his reputation for ruthlessness, he looks out for his followers and treats them with generosity. Despite their rivalry, Cao Cao and Liu Bei are very similar in this regard; they are both supported and trusted by the people.

In this section we focus on the heroes and relationships most important to Cao Cao at the start of the game as defined by Guanxi (the Chinese concept of dynamic inter-relationships). Unlike Sun Jian, whose family contains the seeds of powerful characters, Cao Cao has access to skilled officers right from the outset of the campaign who he can trust to execute his will.

Cao Cao begins with two very powerful generals fighting for his cause: Xiahou Dun and Xiahou Yuan. He’s particularly close to Xiahou Dun, who has served with Cao Cao for his entire military career, and is one of the few who truly understands the reasoning behind his actions.

Cao Cao is a known for surrounding himself with heroes of great talent. While Cao Cao’s immediate family is still important to him, the support of Xiahou Dun and Xiahou Yuan mean he is a position to deploy more officers earlier in the game than Sun Jian and many of the other major warlords. These officers can be given their own armies to lead, allowing you to expand and defend on multiple fronts.

At the start of the game, Cao Cao is branded an enemy of the state by Dong Zhuo, and the tyrant’s henchmen are coming after him. Before he can consider longer-term plans – such as toppling Dong Zhuo – he knows he needs to build a strong foundation. This begins in Chen commandery, south of the Yellow River; a central position with many possible routes of expansion.

First, Cao Cao needs to defend himself against Han Empire henchmen who are supposed to bring him down. Then, he will have to establish a powerbase in Chen by overcoming the local Han Empire administrators. Only then will he look elsewhere, which is when the Tao Qian incident happens. Remember, the bigger Cao Cao’s empire gets, the more factions will look towards bringing him down when/if he shows weakness… 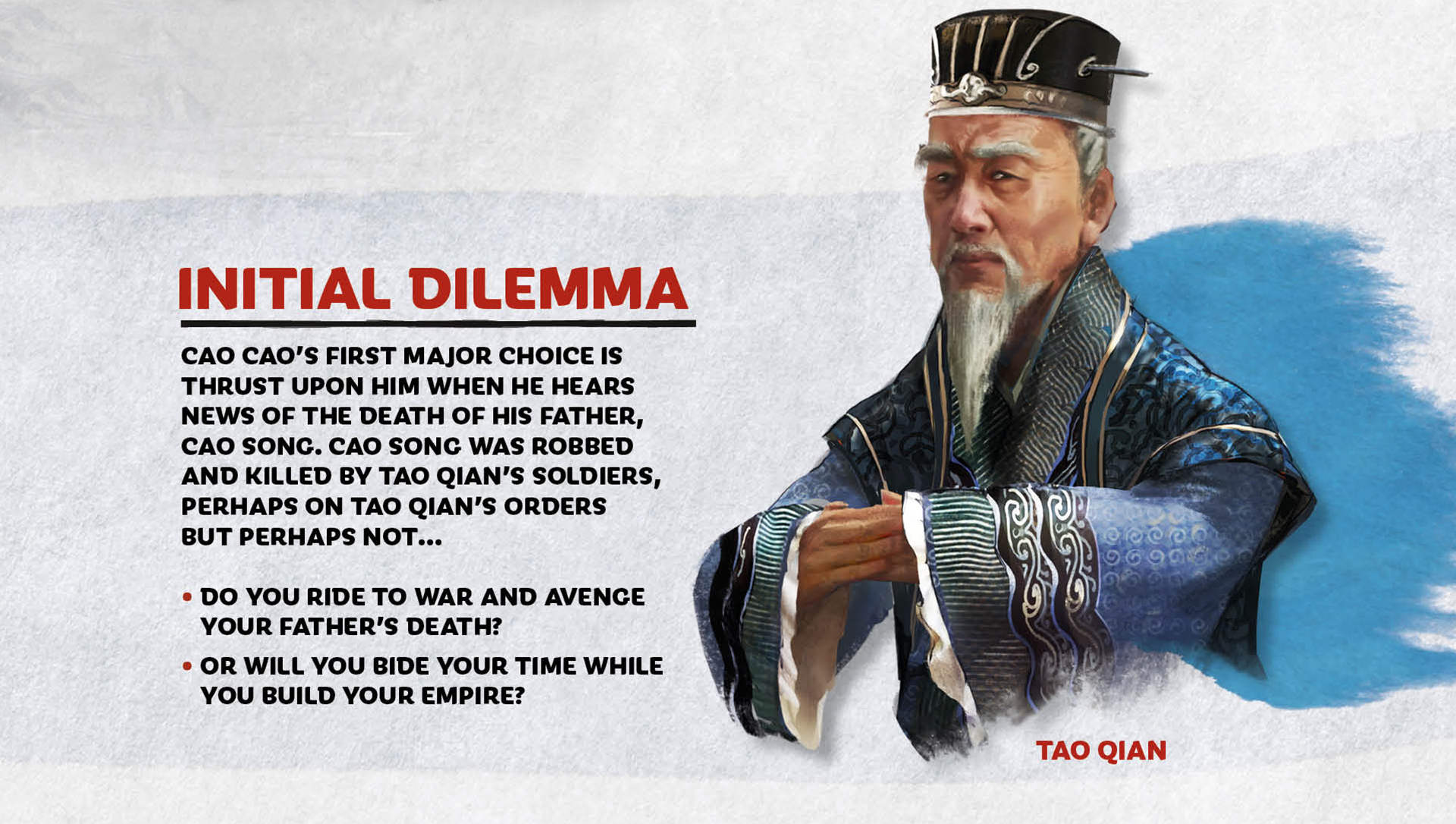 Early in a campaign, each playable warlord will face an initial dilemma after fulfilling certain prerequisite actions. These dilemmas will position the player at a fork in the road, marking a pivotal moment in that warlord’s story. One of the options available to you is a choice reflecting what happened in history, and the outcomes will follow the events of the period. The other lets you forge a tale of what might have been. Total War is all about giving players the freedom to create their own stories in some of the most exciting periods in human history, and these initial dilemmas epitomise that spirit.

You need to decide which course of action will best serve you in your quest for vengeance.

This is where Cao Cao’s cunning nature comes into play. While dealing with Tao Qian, a shrewd player will already be thinking ahead. Which potential conflicts may follow? Yuan Shao or Gongsun Zan in the north? Sun Jian in the southwest? Depending on the situation, Cao Cao can start manipulating these factions against each other, tying them down in proxy wars and ensuring he has the upper hand when the inevitable conflicts emerge…

Cao Cao’s diplomatic arsenal will help to keep surrounding factions off his back. His manipulation ability can also be used to make people friendlier with him. In some situations, this can mean the difference between being declared war at, or not – or it can mean that Cao Cao is able to form a powerful alliance that can protect his back. After all, you’ll need every tool available to stay afloat in the simmering diplomatic cauldron that is the centre of the campaign map.

Once your powerbase is secure, you can look to expand and conquer other territory. Moving north will likely lead to confrontation and battle with powerful warlords in that region, such as Yuan Shao or Gongsun Zan. Forging south, Cao Cao might appeal to other powerful lords in his schemes against Dong Zhuo.

Your ultimate aims are to build a larger realm in the north of China, forming the Kingdom of Wei, and to conquer the factions that establish themselves in the south, uniting all of China under your rule. The allies and enemies you make during your campaign will play key roles in your pursuit of that goal.

What kind of player is Cao Cao for?

He is the choice of corrupters, conjurors, and puppeteers. Those who prefer to employ sly methods, pulling strings in the shadows and manipulating others to ensure the future of Wei Kingdom.