Prior to the events of the main game, there was a countrywide social upheaval called the Yellow Turban Rebellion, one of the largest peasant uprisings in Chinese history. The reasons for the rebellion were manifold, but the key notion that drove it was that Emperor Ling of Han was perceived to have lost the Mandate of Heaven.

The Mandate of Heaven was the divine right to rule, but it was conditional and could be withdrawn by Heaven if a regime proved unjust and corrupt. Heaven would then demonstrate its displeasure with cataclysmic natural disasters, and that’s precisely what happened. Against a tapestry of oppressive taxes, and at a time when Emperor Ling of the Han Dynasty was in thrall to his court Eunuchs who abused their privilege to live in opulent excess, a series of natural disasters struck. Failed harvests ravaged northern China and caused a great famine, while the Yellow River burst its banks and caused widespread flooding, washing away crops and livelihoods alike. A great many died in the famine.

Three brothers, Zhang Jue, Zhang Bao and Zhang Liao, led the initial uprising, using the teachings of Taosim to drive their message. The Zhangs espoused the three Taoist virtues of compassion, frugality and humility – the polar opposite of Ling’s corrupt court. They spread the belief that Ling had lost the Mandate of Heaven, that he should be deposed, and that a just ruler would take his place, embodying these three virtues and realising the Great Peace. The Blue Sky reign would end, they said, and the Yellow Sky would rise. Their followers adopted yellow head-scarves to symbolise their belief, and thus the rebellion gained its name. 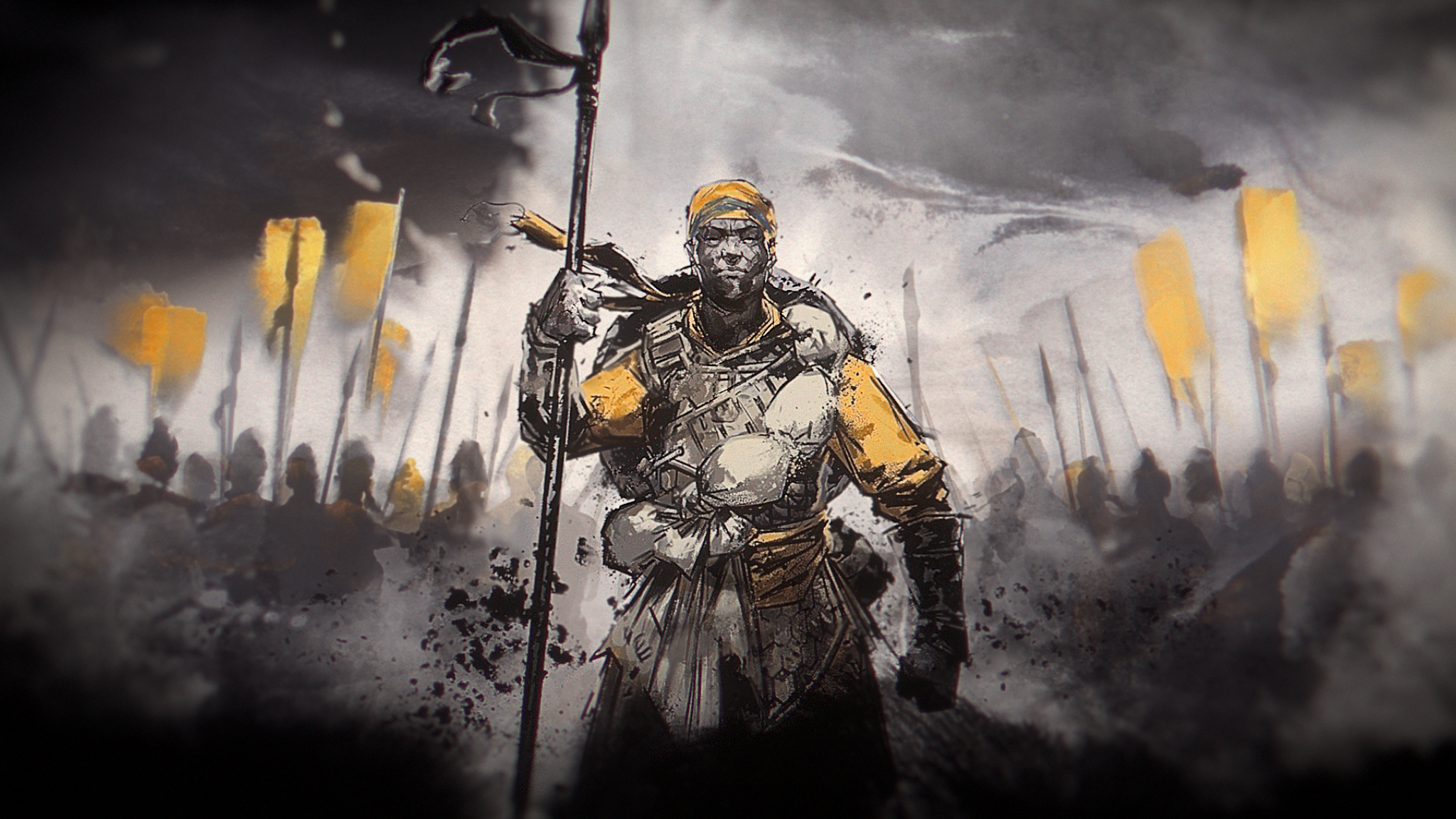 The movement brought a vision of hope, and it spread like wildfire. As sympathetic lieutenants quit their dynastic service and joined the popular cause, they forged the rabble into an army. The entire corrupt chain of the status quo was suddenly under threat – from minor provincial governors skimming the tax coffers, all the way up to the Emperor himself. The Han Dynasty rallied its allies, mobilised its military, and battle was met.

While the rebels had great numbers to command, they couldn’t match Han’s trained, drilled and well-equipped armies, and engagement by engagement, they were defeated and the movement suppressed. Millions more suspected of being sympathisers were slain by imperial agents. The Zhang brothers were killed, but their vision lived on, and pockets of Yellow Turban resistance persisted for 21 years after the movement began.

The Han Dynasty paid a high price for victory however, and began crumbling from within. With provincial administrations and the economy in ribbons, unrest was rife and many turned to banditry. Ling himself died, with He Jin, brother of the Empress, stepping into the power vacuum. He was soon assassinated by the court eunuchs, who spirited away Ling’s 13 year-old son and heir, Shao. The warlord Dong Zhuo intercepted them however, and installed the child-emperor as little more than his puppet. Thus began the oppressive reign of the tyrant, which led directly to the civil war characterising the Three Kingdoms period. 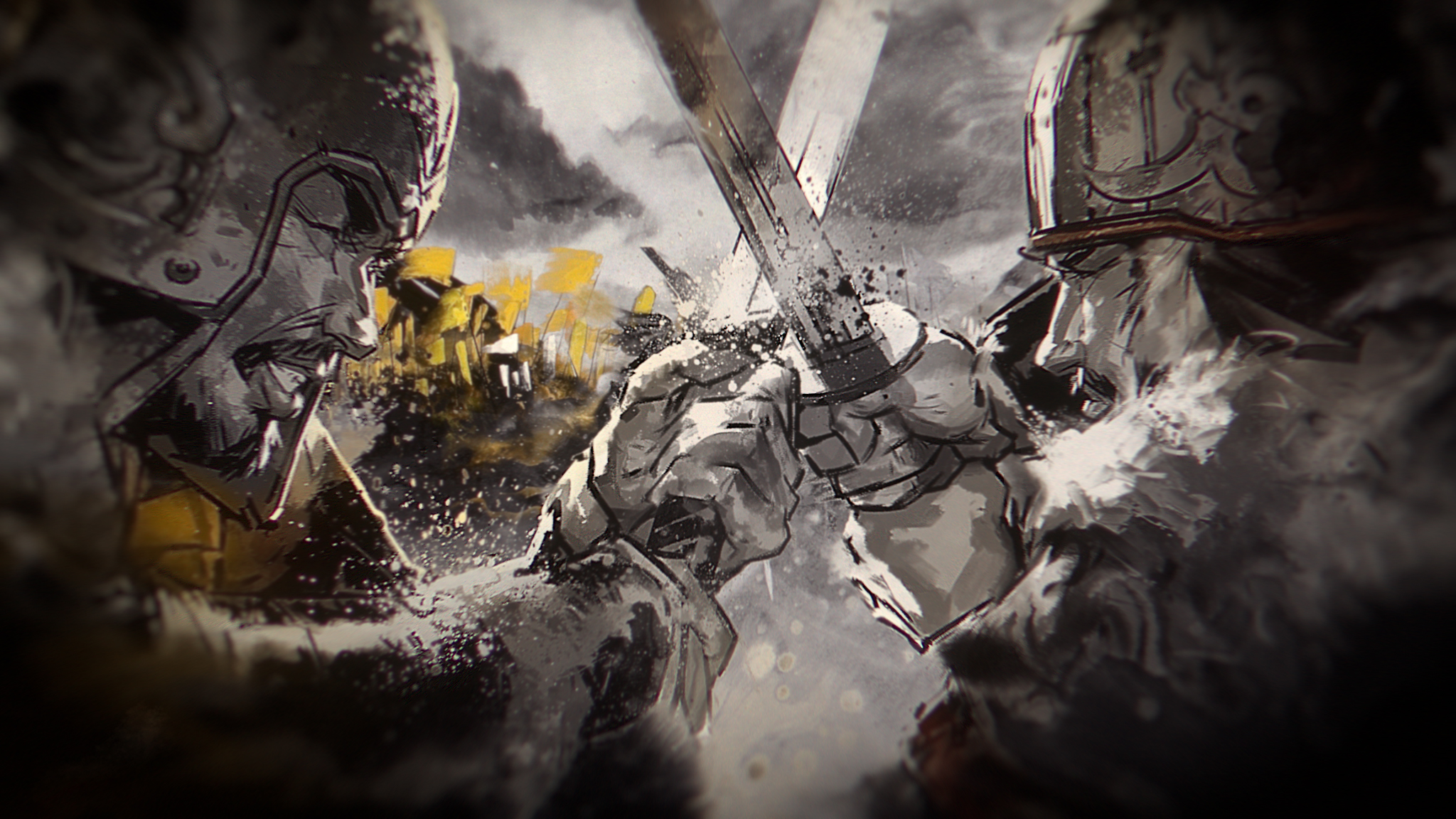 While the Yellow Turban Rebellion would never rise again as it once had, hope and belief persisted, and this is where we figured we could interface the catalyst for the Three Kingdoms conflict with the period itself. The Yellow Turban Rebellion Warlord Pack introduces three playable Yellow Turban factions to the beginning of the Three Kingdoms conflict, with each faction leader embodying one of the Three Taoist Virtues taught by the Zhang brothers themselves. Make no mistake – these factions are not established like the other dynastic warlords in the core game. They’re the underdogs, fighting for the good of the people, and with few of the resources of the Dynasties. It’ll be a struggle against the odds, and the established factions who, from the get-go, do not formally recognise the legitimacy of the Yellow Turbans. They won’t even engage in diplomacy with you to begin with. Nonetheless, your objective will be to reignite the rebellion and realise the Great Peace, that vision of a just and righteous rule across the whole of China. This introduces a new gameplay dimension – and a new endgame to shoot for – in Total War: THREE KINGDOMS.

Each of the three playable warlords is strongly themed on one of the three Taoist virtues, and comes with his own skill trees, unique units, buildings, and the Yellow Turban specific tech tree, which is designed around Taoist enlightenment.

He Yi represents the Domain of People. He’s a Yellow Turban commander from Yu province and, Like the original founder of the Yellow Turban movement, he is a Healer, and empathises with the suffering of the common people. He is able to rally vast masses to the cause of the rebellion. 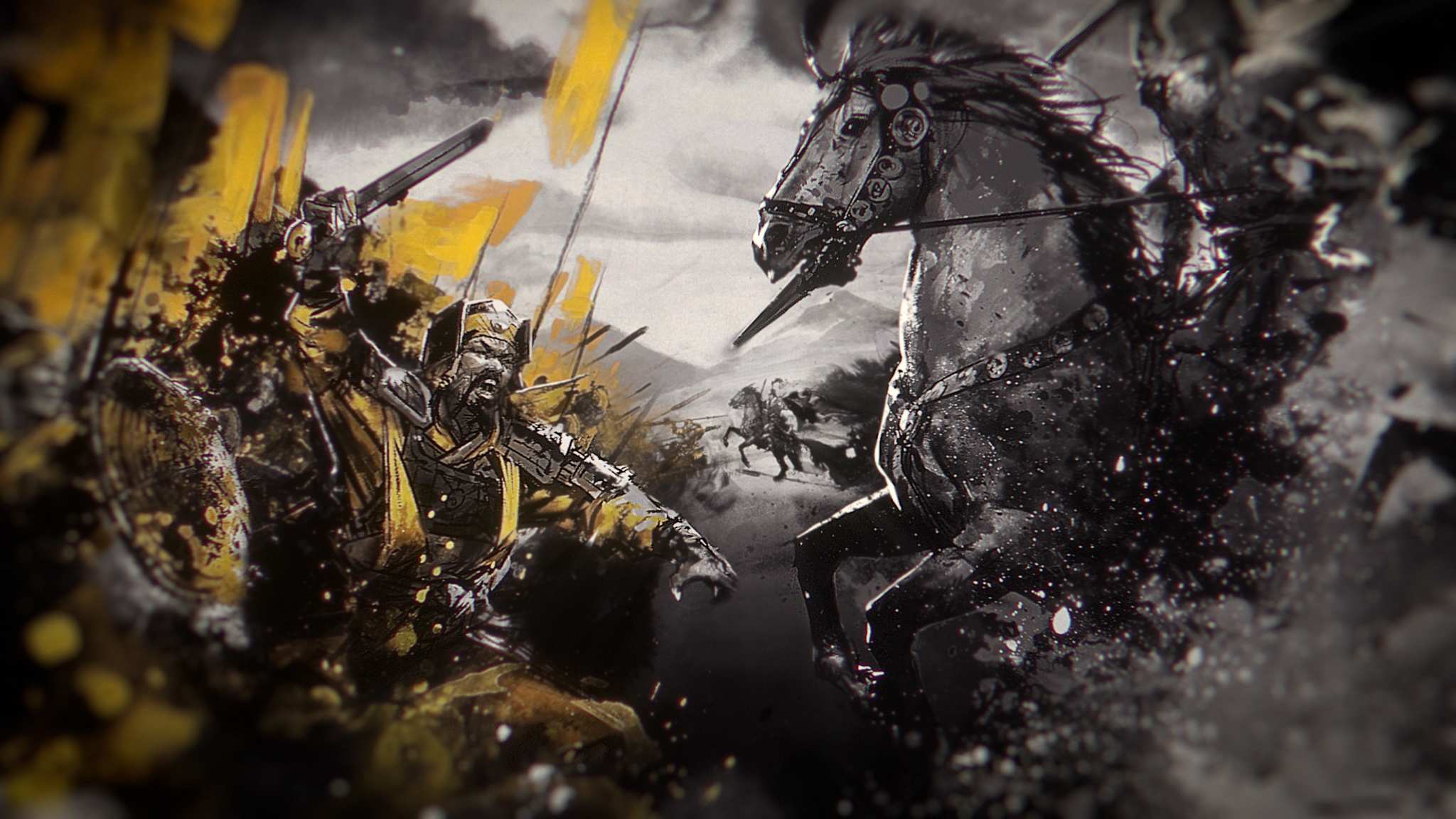 Representing the domain of People, He Yi espouses Compassion. He fields veteran Yellow Turban warriors and strong berserkers in battle, and has access to the Healer’s Lodge unique building chain, a multifunctional building boosting population growth and replenishment and generating a small income from the sale of medicine.

Gong Du is a Veteran. Originally a bandit leader in the Changsha area, he aided Ou Xing in his rebellion against Sun Jian. He is a former military commander, and something of a charming brigand: well-liked and popular with the troops. He is dedicated to claiming the spoils from the tyrants he overthrows.

Representing the domain of Land, Gong Du espouses frugality. He fields former soldiers, guardsmen and converted nobles in battle and can build the unique Hidden Fort building chain which helps supply the Yellow Turban armies and increases the amount of spoils they can carry off after a battle. 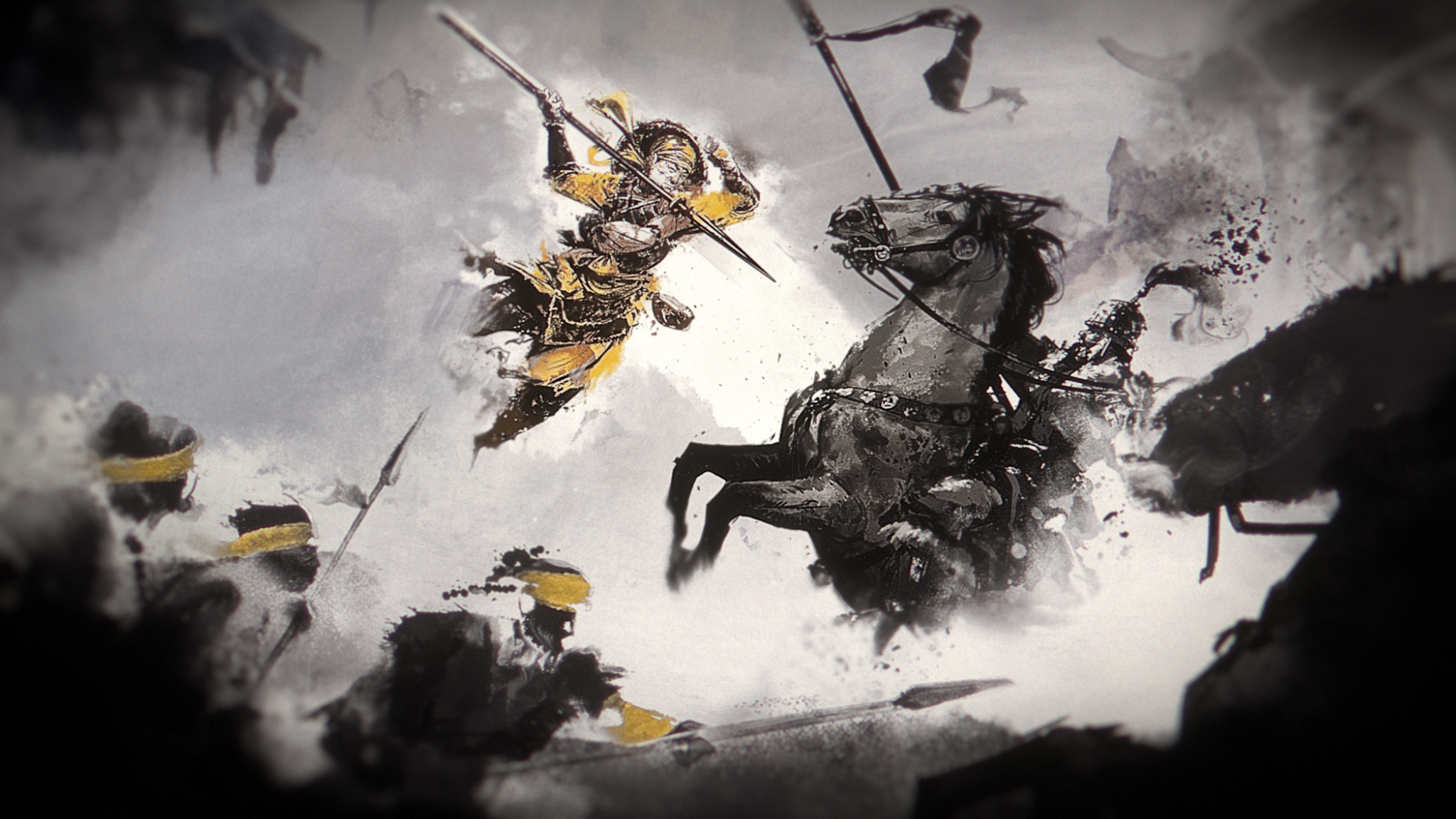 Huang Shao is a Scholar, and a Yellow Turban commander from Yu Province. He is the only leader to have met the original founders of the Yellow Turban rebellion. As such, he best understands their spiritual teachings, and aims to ensure the rebellion doesn’t lose its way on the road to realising The Great Peace.

Representing the domain of Heaven, Huang Shao espouses Humility. He fields religious fanatics, spiritual martial artists and scholars in battle, and can build the Gardens unique building, a tranquil place that helps keep both the people and the characters under Huang Shao’s control happy.

The Yellow Turbans have a unique and highly thematic unit-roster. As many of their warriors are drawn from vast swathes of peasants and civilians, or those who have backgrounds as soldiers, devotees or scholars, there is a great diversity within individual units, given the varied occupations and backgrounds of its members. The masses of basic Peasant and Yellow Turban units are available to all Yellow Turban characters. Key specialist and elite units are then available according to the domains each hero represents, giving them unique tactical specialisations and methods of warfare. 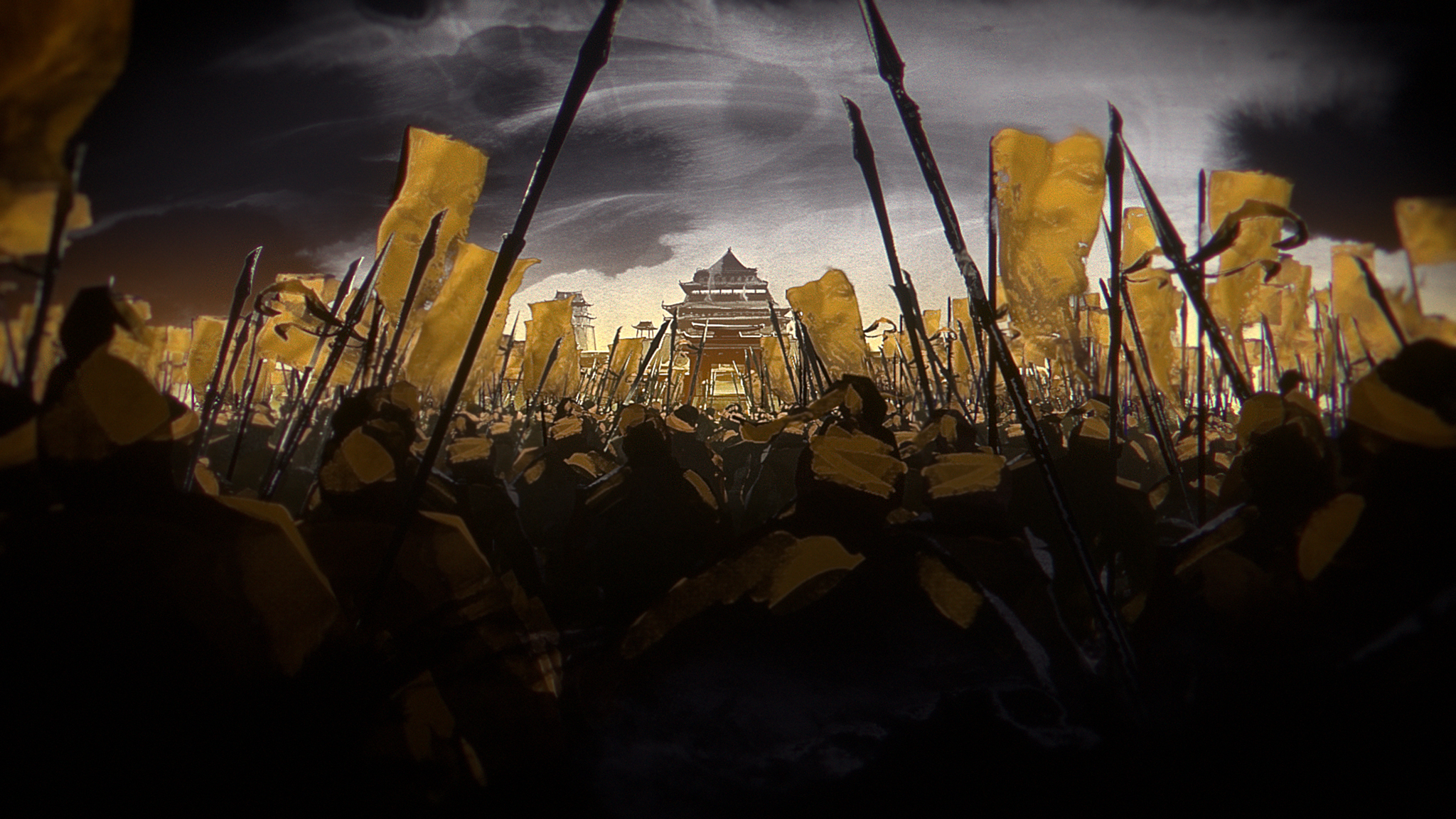