Bartering, Bronze, and Battles: TROY and the Bronze Age

It’s time to take another behind-the-scenes look at the development of A Total War Saga: TROY!

This time, we spoke with Creative Assembly Sofia game director Maya Georgieva as well as senior game designer Milcho Vasilev about the ins and outs of the time period, multi-resource economies, and how Bronze Age battles really went down.

The Bronze Age is a vast period of time that spans more than 2,000 years and encompasses the rise and fall of multiple ancient civilisations including Egypt, Sumer, Babylon, the Hittites, and the Assyrians. Its name – as you probably already guessed – is derived from bronze being the metal of choice for contemporary tools and weapons.

It was a time when gods were worshipped in monumental temples and kings ruled from formidable fortresses. Rulers often claimed divine status – like the pharaohs in ancient Egypt – or at least divine origin – as seen in Greek myths – to justify their own undisputed right to rule. 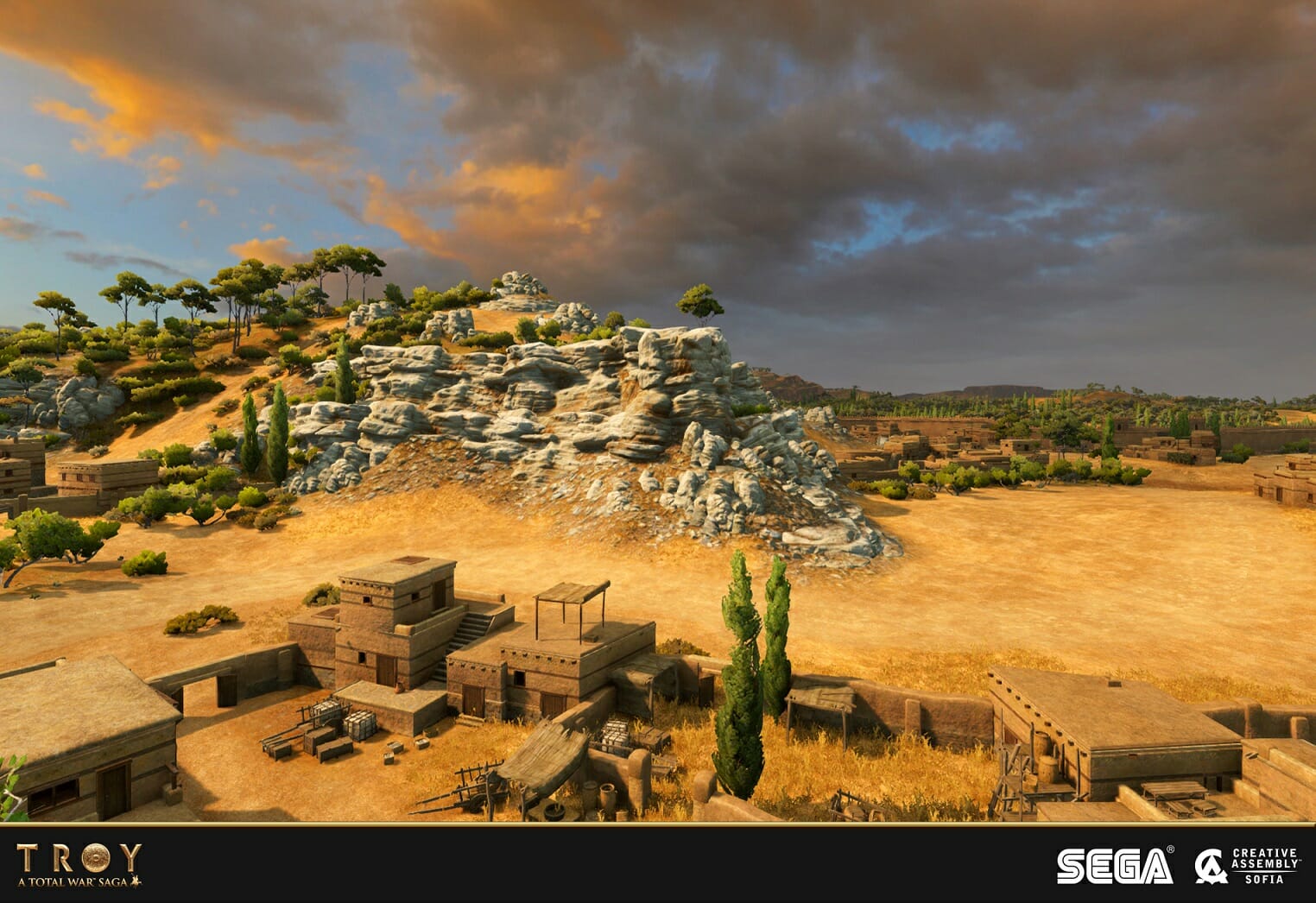 The time period was referred to as the Age of Heroes by the Classical Greeks, and culminated in the catastrophic Bronze Age collapse that precipitated the beginning of the Greek Dark Age. Additionally, some researchers believe that the story of the Trojan War is a direct result of this tumultuous period in history.

A Total War Saga: TROY focuses on the late stages of the Bronze Age, just after the Minoans on Crete have declined and the power vacuum in the Aegean is being filled by the expansion of the Mycenean Greeks. So how does Bronze Age culture feed into the game? Maya explains:

“It’s an age of heroes, gods, and monsters in which religious myth is to the people then what scientific knowledge is to us now. Gods were often regarded as part of the world, and natural phenomena as their manifestations. 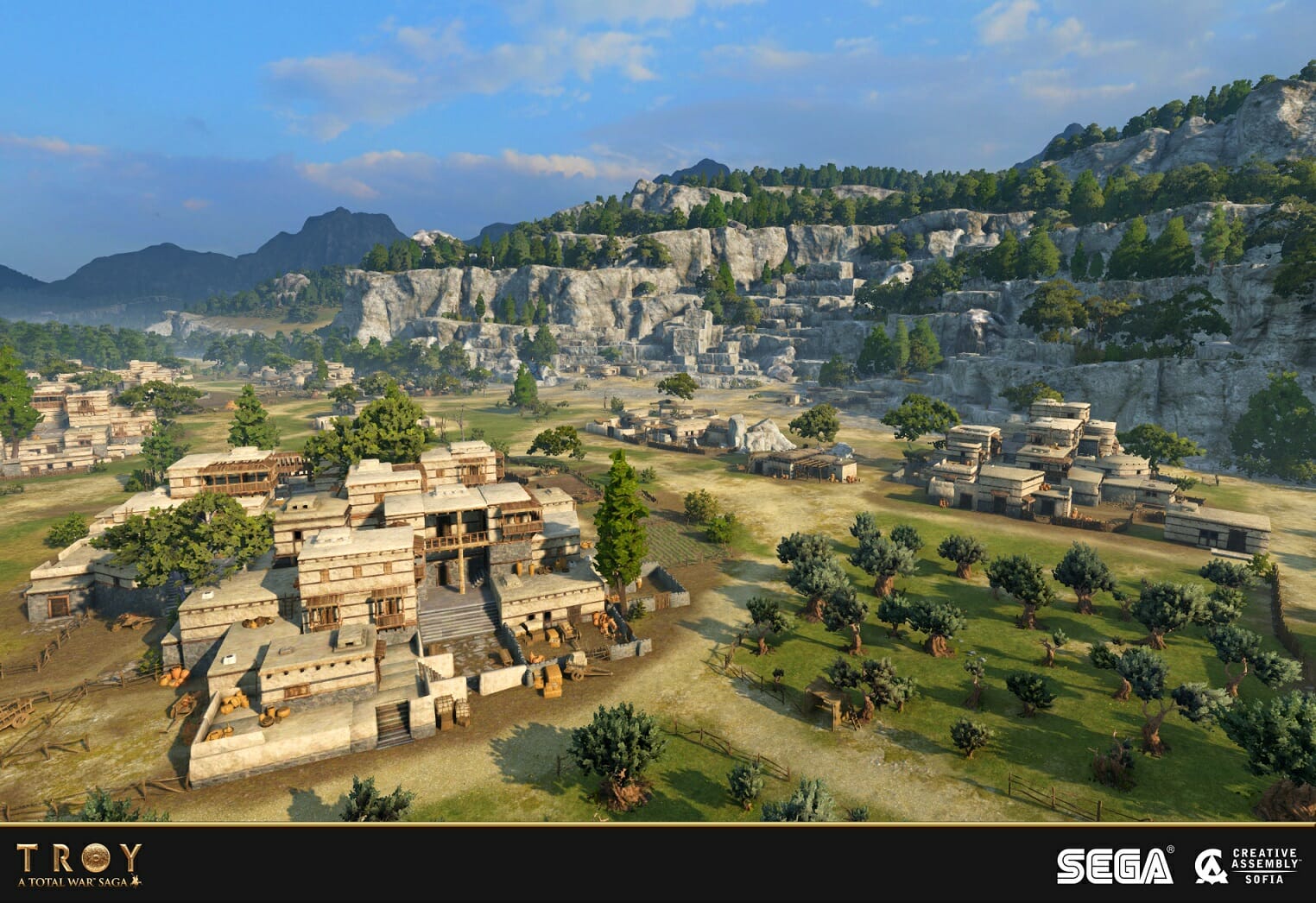 This is something that we need to constantly remind ourselves when working with Homer’s epic. In the Iliad, gods often appear as if physically present, but a closer look reveals that in most cases they manifest only through the thoughts and actions of mortals.

That’s why you won’t see gods stomping on the battlefields of TROY. For Homer and his audience, doing something out of love and being commanded by Aphrodite is one and the same – but we make the distinction.”

Another aspect of the Bronze Age that has been carried across to TROY is the use of a multi-resource currency – as Maya says: “Our modern economy is so reliant on it that we can hardly imagine a time before money existed, but the Bronze age was exactly such a time.” 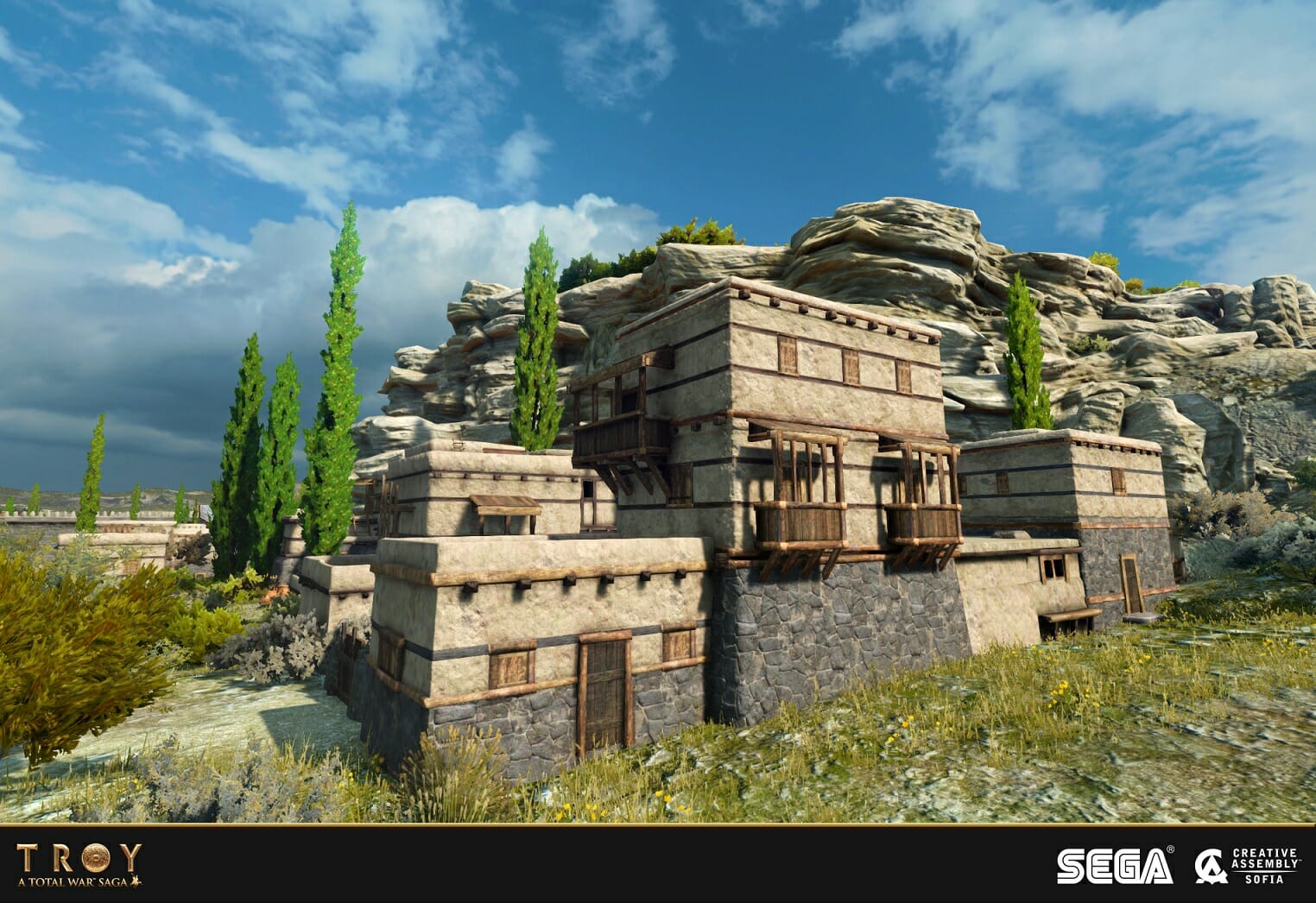 During the Bronze Age, bartering – the exchange of objects and commodities – was the way people traded, and gold – and of course bronze – was just another of these commodities. Maya observes:

“One key aspect of the economy of the Bronze Age is its utter dependence on trade. This stems from the fact that bronze is not a metal that can be mined – it’s an alloy of copper and tin, and while copper is relatively abundant, tin has been mined in very few and very distant places. So, access to tin was reliant on a vast network of trade and inter-state tribute exchanges.”

Indeed, some researchers speculate that the long period of war and strife at the end of the Bronze Age disrupted the trade routes on which all states relied so much that the interruption of trade brought about the Bronze Age collapse.

It would be remiss to talk about the Bronze Age without also delving into the topic of Classical Greece – especially as the representation of the former in popular culture is often vastly different to reality.

Greece in the classical period is perceived as a land of fine sculpture and philosophers – the cradle of democracy and home to citizen-soldiers in elegant Corinthian helmets who stand firm shoulder to shoulder in the phalanx to defend their homeland from eastern invaders.

In contrast, the Late Bronze Age Mycenaeans had rather crude art, and cruder still citadels with cyclopean walls instead of open agorae. They were ruled by grasping, power-hungry kings and a palace-dwelling elite who fought clad in heavy bronze armour atop swift-moving chariots. 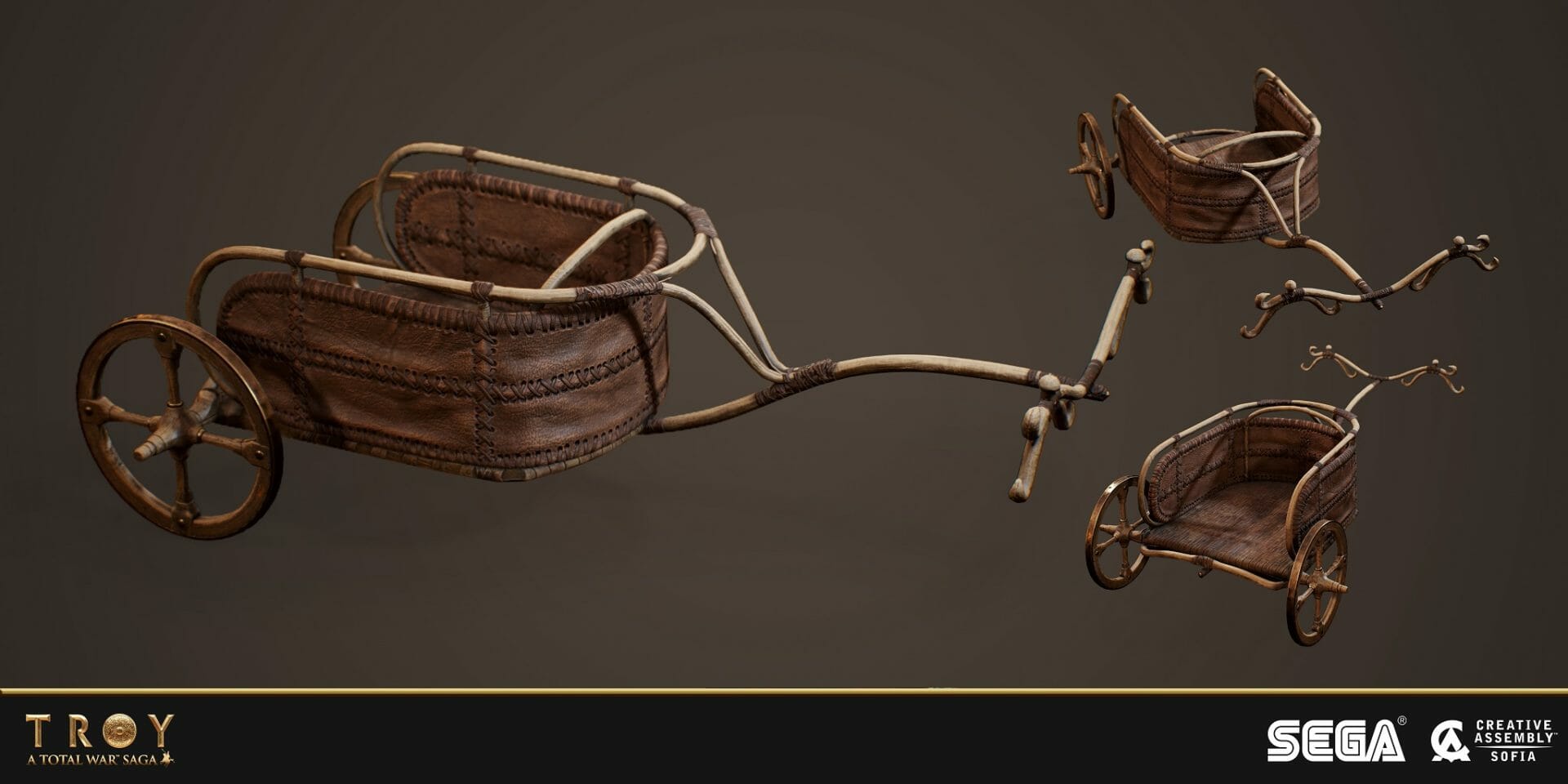 Maya observes that “in popular culture the world of the Mycenaeans has been so utterly eclipsed by the image of Classical Greece that to uncover and showcase it is incredibly exciting for us. That’s why for TROY we chose the truth behind the myth approach, which lets us show those two conflicting images together: the classical one in the UI art and campaign shroud, and the authentic Bronze Age one revealed underneath.”

Elaborating more on the representation of both the myths and the reality depicted in the game, Maya continues:

“The art of TROY’s UI is inspired by black-figure pottery, which is representative of the early Classical Greek period – the time of Homer. It is the visual language in which myths and legends have passed down through time and its inaccuracy corresponds to the embellished reality of Homer’s story. This is the Myth layer of the game’s visuals. 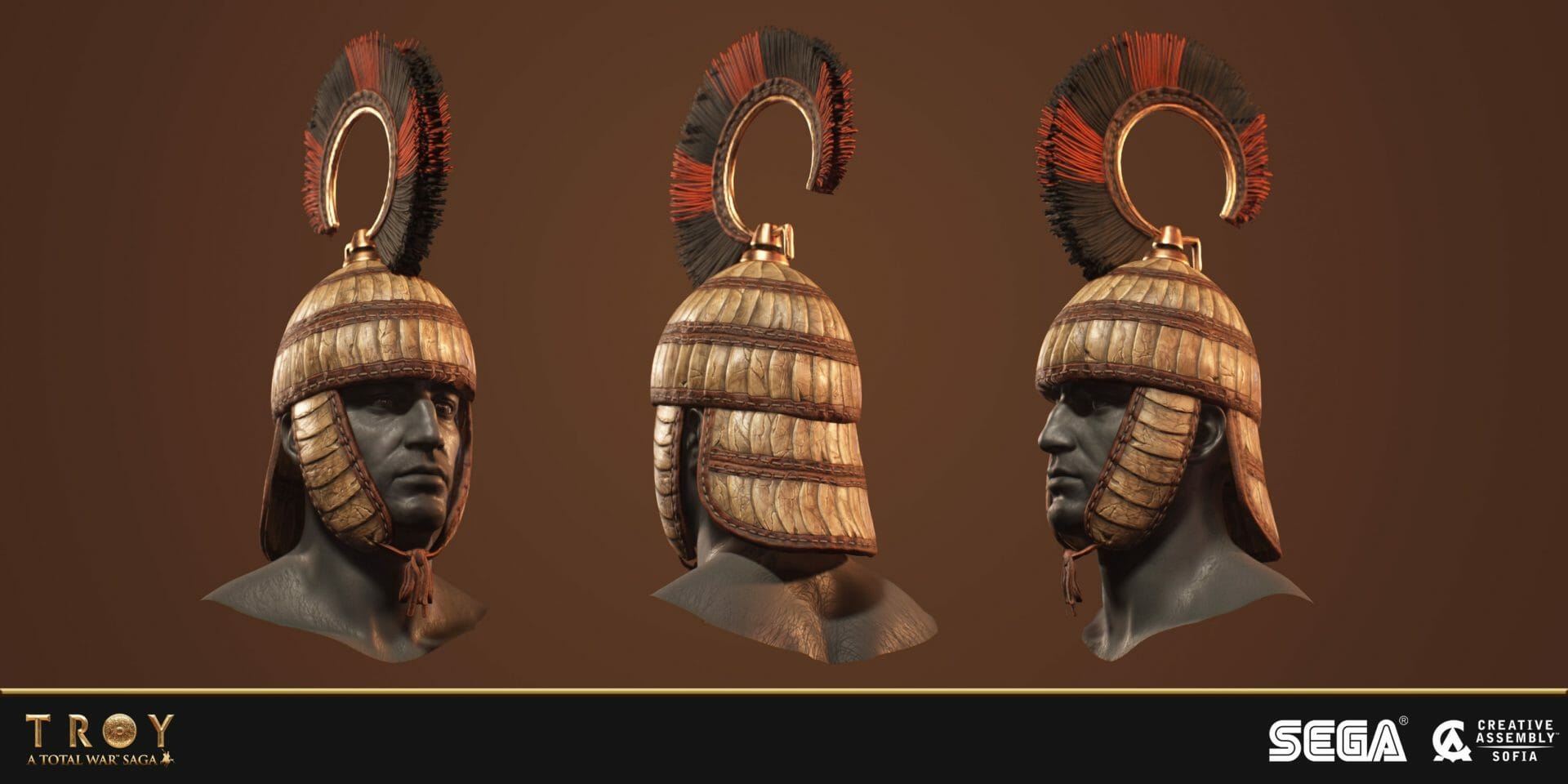 In contrast, on the battlefields of TROY and in the revealed sections of the campaign map, the art is informed by the archaeological finds from the period. Here the bronze armour, boar-tusk helmets, chariots, cyclopean walls represent the Truth layer of the game.

We place the two layers side by side in TROY, hoping to reveal both the connections and the contrast between the two.”

As a Total War game, it goes without saying that the weapons and armour of the time period are being very carefully considered during the development of TROY.

Unlike iron, bronze ages well, and so there have been numerous archaeological finds that include Bronze Age weapons and armour. Despite the spear still being the most common weapon of the Bronze Age, swords, axes, and even what is believed to be bronze tipped clubs have also been discovered. There is evidence that javelins and arrows were being used, but slings were much commonly employed as the design of the bow was still relatively basic, with these hurling stone as well as bronze projectiles.

Fittingly, combatants often wore extremely heavy bronze plate armour like the famous Dendra Armour (named after the village where it was found), but they also used other, more unusual materials such as boar tusks to adorn helmets and armour. 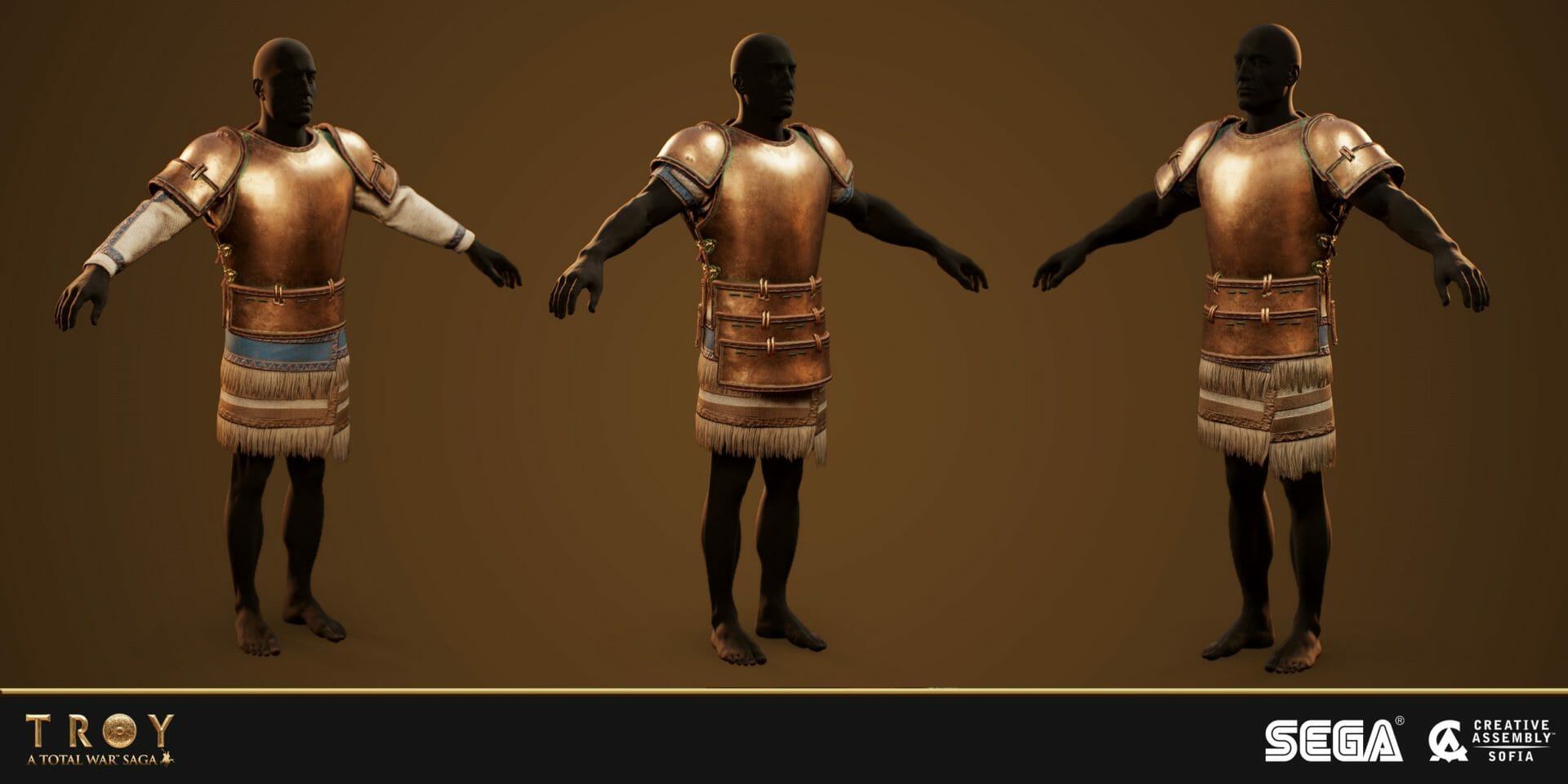 Shields were mostly made of hide or other perishable materials with occasional bronze boss, but the presence of bronze shields in some archaeological suggests they were also used on occasion. Size-wise, the Bronze Age boasts some of the largest shields in history, some of them covering almost the entire body. The so-called figure-of-eight shield is an iconic Mycenaean design, and was made from several layers of hide reinforced with bronze plates.

According to Milcho: “In TROY, we have tried to represent the full variety of weapons that we know existed at the time as well as make some unique functionality for units armed with the large Bronze Age shields. This allows them to sling the shields onto their backs and use their spears two-handed or to just move faster without those huge shields getting in the way. We also recorded some new audio to better represent the specific sounds bronze weapons and armour make when they clash.” 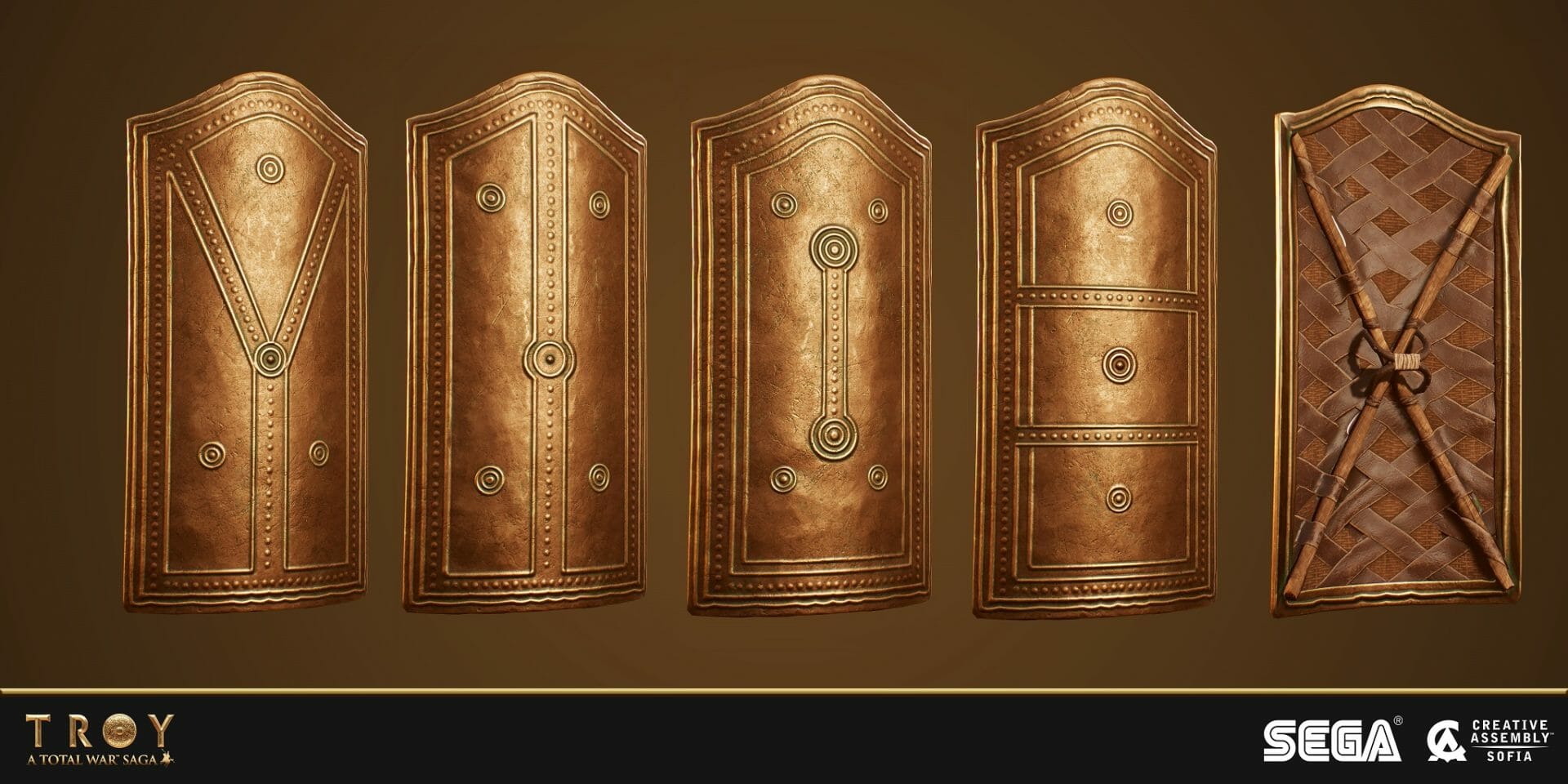 There isn’t a lot of information about the way battles were fought in the Bronze Age available, but we do know it was definitely a lot more chaotic – and even primitive – when compared with battles from more recent historical eras.

Horses were mostly used for transportation or to pull chariots, and there was no real cavalry as we know it from later ages. Two-horse chariots, however, were quite prominent, and according to preserved records the palatial states of Knossos and Pylos were able to field several hundred of them.

Siege equipment was also not available, which led to walls being a massive setback for attackers looking to pillage or occupy a rival city.

Skirmishing was a huge part of warfare, with there were being no real battle formations to speak of. Warriors were led into battle by their heroes, who would lead by example with their courage, bravery, and battle prowess.

Milcho breaks down how the intricacies of Bronze Age combat be conveyed in A Total War Saga: TROY as follows:

“To make sure the battles in Troy are just as exciting as they are in other Total War games, we have improved on many features to better represent the Bronze Age and its specific challenges.

We know that infantry was the focus of the age, so we have further refined the way light, medium, and heavy infantry feel on the battlefield by giving each group a more distinctive role. Heavy infantry is very strong and almost impossible to take down head on – but they are slow and vulnerable to flanking, which light infantry excels at by being more than twice as fast and able to manoeuvre the jagged Greek terrain.

Speaking of terrain, we have also made a lot of changes to the battle maps by introducing new terrain types like mud, which slows down heavy infantry and reduces their fighting capabilities, and tall grass, which allows some units to hide and move through it unseen. We’ve also introduced lots of natural chokepoints and flanking routes to make the battles feel even more tactical and engaging.”

We’ll be continuing to delve into the development of A Total War Saga: TROY over the coming months by looking at gameplay, features, mechanics, and more so stay tuned!

For now, make sure to keep an eye on our social media channels for all the latest updates, add TROY to your Steam wishlist, and be sure to check out these articles by Ancient History Encyclopedia on the Trojan War and Achilles! 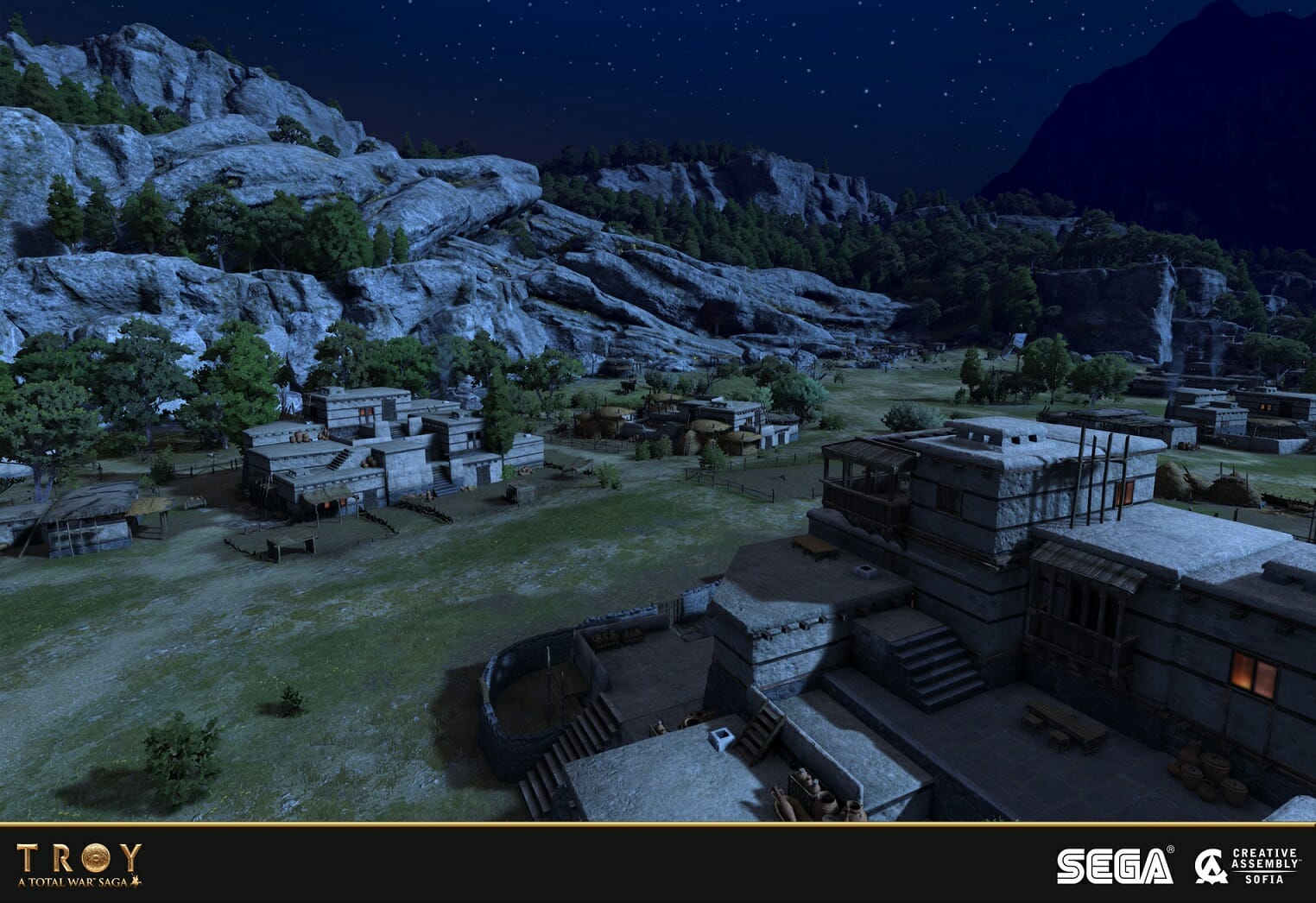