Gotrek Gurnisson is one of the legendary Dwarf Slayers, those brooding, taciturn, yet deadly warriors whose very raison d’être is to bring death, destruction and all-round doom to any and all enemies of the Dwarf race.

Even for a Slayer, Gotrek is a particularly grim example, for his shame is especially great. He refuses to speak of the humiliation that led him to follow such a path, except to say it is his only desire to die in mortal combat against a worthy foe and pull them with him into death’s cold embrace.

The trouble is, Gotrek is rather too good at his work – or bad, depending on your point of view – and has thus far entirely failed to die, instead becoming something of a celebrity. Gotrek’s only companion is his manling hagiographer, Felix Jaeger, whose role it is to record Gotrek’s deeds – although he often finds himself somewhat reluctantly taking part! 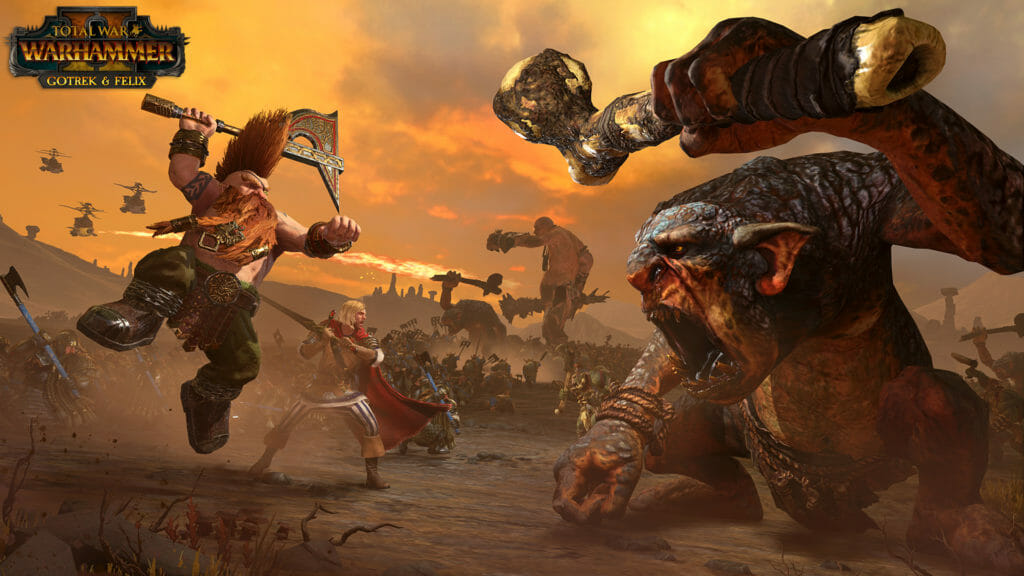 Gotrek and Felix are legendary adventurers and mercenaries, known throughout the Warhammer world by those that sing their praises and curse their names. Veterans of countless minor scrapes and grand battles, both are formidable warriors in their own right and would make a welcome addition to any army, if a commander is able to keep their attention for long enough…

If you have the Gotrek & Felix DLC, you’ll spot a new interactive marker on the campaign map. Click it, recruit them, and let the adventures begin!

Gotrek and Felix are wandering adventurers and mercenaries. They can be very powerful allies, but they can’t exactly be relied upon to stick around forever. After all, Gotrek has a deathwish to fulfil, so you can’t always be sure where their quests will take them.

To represent their iconic style in game, they function a little differently to other characters:

Fear not though, because their wanderings will inevitably lead them back to you at some point, and you’ll find they have likely increased in prowess in the meantime. 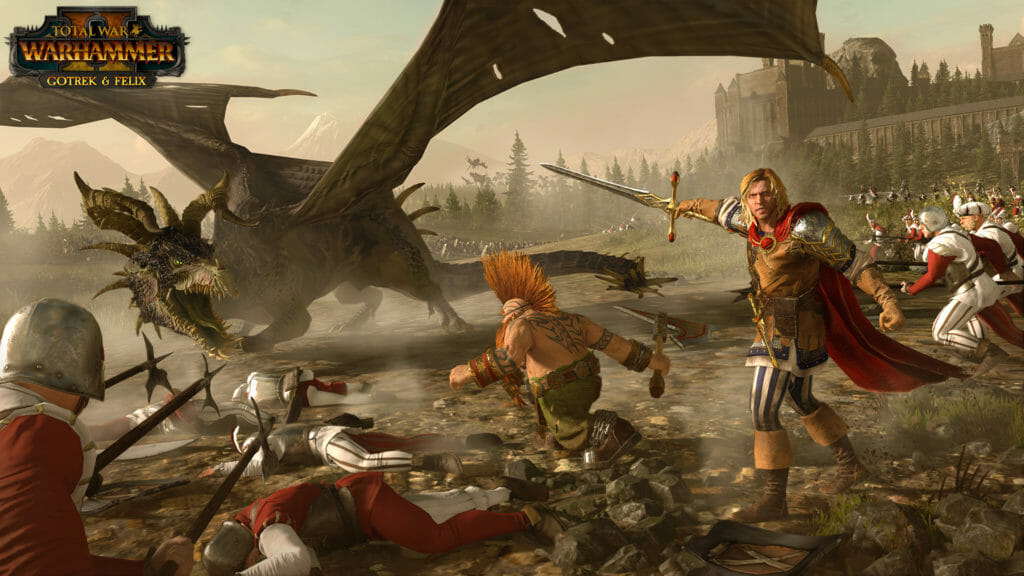 How to get them

The Gotrek & Felix DLC is exclusively available in September’s print issue of White Dwarf Magazine – you just need to follow the instructions on the special card you‘ll get with your copy.

White Dwarf is available from all branches of Warhammer and Games Workshop stores from independent stockists, and through Games Workshop’s online web store. It’s also available through all good newsagents and bookshops that stock it.

After that period of exclusivity, Gotrek & Felix will be available to anyone for free through Total War Access from the 17th of October. 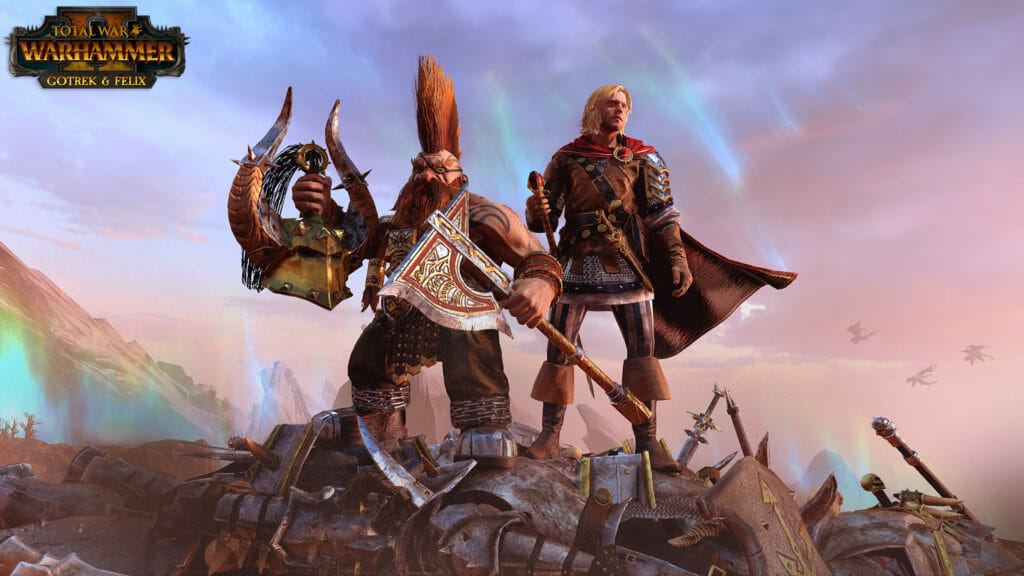 After a month, anyone can grab them for free from Total War Access.

What game are they for?

I don’t have Total War: WARHAMMER II yet – what do I do?

If you create your free Total War Access account (or you have one already), once you input the Unique Access Code which is on the back of your White Dwarf Card you should also see a 50% off Total War: WARHAMMER II coupon in your Total War Access inventory, alongside other freebies and offers. These coupons are also transferable to a friend and will expire on the 10th of October.

When can I start playing with them?

If you’re a subscriber to White Dwarf then you should receive your copy a few days before the 20th of September. You’ll need to sign in to Total War Access to use your unique redemption code in order to unlock them.

If you buy White Dwarf, you’ll be able to get access to them as soon as they hit the shelves in store.

If you don’t subscribe or buy White Dwarf, you’ll be able to access them from the 17th of October by signing up or logging in to Total War Access.

I hate exclusives/I can’t get White Dwarf/why not just update the game/why have you done this?

Rather than spending our marketing money to advertise our game in a magazine, we used it to make in-game content that we hope will encourage people to try our game out.
In return for making that content exclusive for a month in a magazine, the magazine promotes the game in return.

Even better, once the period of exclusivity ends, we can offer the content to everyone through Total War Access for free. So anyone can get hold of new game content in the end.
We think this can be a more effective form of marketing than just making adverts, and this content wouldn’t exist if we didn’t fund it in this way.

We get to add even more free content to our games, and our marketing pay for it. We think that’s a pretty good arrangement.

You can also agree to us sending you regular email updates about Total War through it (but you don’t need to do that to get the free stuff).

We’re planning on expanding Total War Access over time to offer even more benefits in exchange for the opportunity to tell you about the latest Total War news and offers – find out more here.

Ultimately, being able to contact you directly is really valuable to us as it helps us tell you about new games and products we have coming up. In exchange, we’ll give you some great freebies and exclusives – even if you’d rather opt out of our mailing list. However, we hope our emails will prove so useful to you that you won’t want to opt out, so we’ll keep working on that to make them as entertaining and relevant as possible.

How can I buy White Dwarf to get access to the characters?

You can get White Dwarf magazine from all branches of Warhammer and Games Workshop stores from independent stockists, and through Games Workshop’s online web store. It’s also available through all good newsagents and bookshops that stock it.

Please note that due to technical limitations of providing a unique code, the card for Gotrek and Felix is not available with digital editions of the magazine. It is only available through the printed edition of the magazine.

When will the White Dwarf be in stores?

When can I redeem them through Total War Access without buying a White Dwarf?

How do I redeem the characters?

The Gotrek & Felix DLC should now be playable in your game.

Some countries may have restrictions with signing up to Total War Access. If you cannot create a Total War Access account and you have purchased a White Dwarf, simply email SEGA customer support and include your unique redemption code.

Will Gotrek and Felix be available if I’m playing on macOS and Linux?

Yes, shortly after release on Windows.

Can I play Gotrek and Felix in my multiplayer campaign?

Due to the nature of how the characters work in game, they will not be available to recruit in multiplayer campaigns.

However, they are available in custom battles and non-campaign multiplayer.