The next title in the award-winning Total War strategy series and the first to explore ancient China as a theatre of conflict now has an official release date: 7th March 2019. Choose from a cast of legendary Warlords, unite China under your rule, and build a legacy that will last through the ages.

Gamers purchasing Total War: THREE KINGDOMS through a SEGA approved retailer* before release or in the first week on sale will gain a free Early Adopter bonus: The Yellow Turban Rebellion DLC.

The Yellow Turban Rebellion is a Warlord Pack DLC, introducing three new playable Warlords for the Grand Campaign, enabling players to lead armies of bandits, zealots and commoners in a crusade to topple the corrupt Han Dynasty and forge a new future for the people of China. Harness the powers of enlightenment by studying the ‘Three Books of Great Peace’ focused on the three virtues of Taoism: Frugality, Compassion, and Humility. 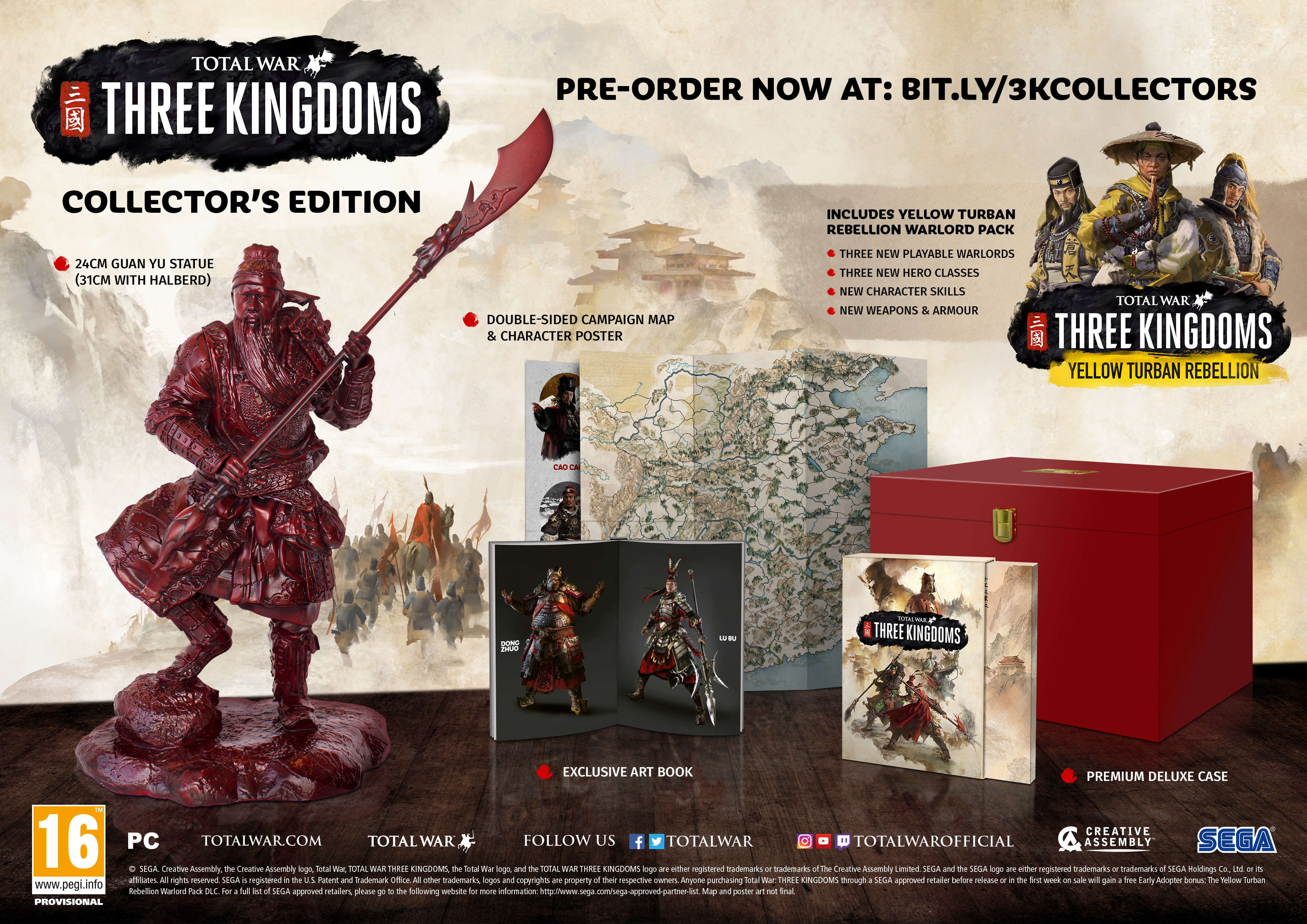 The Total War: THREE KINGDOMS Collector’s Edition will be produced in a single, exclusive production run.

Influenced by the modern historicist Chinese art that defines the game’s visuals, the Collector’s Edition ships in a beautifully modern, sleek, and minimalist luxury presentation chest, featuring vibrant red colouring and adorned with a premium gold leaf “Three Kingdoms” Chinese stamp. Contained within is a collection of riches fit for an emperor:

A weighty resin statue of the legendary hero Guan Yu, a general so talented that in death he ascended to the heavens and earned godly status. His full title and godly remit is:

Guan the Holy Great Deity; God of War Manifesting Benevolence, Bravery and Prestige; Protector of the Country and Defender of the People; Prow and Honest Supporter of Peace and Reconciliation; Promoter of Morality, Loyalty and Righteousness.

People pray to his statues when looking for courage, strength, protection, and wealth. As one of the most iconic characters of Three Kingdoms China, he features as a key character in the game and his statue is certainly worthy of adoration.

Inside a black faux-leather cover lies a trove of beautiful and exclusive artwork; painterly landscapes,

detailed arms and armour. A sumptuous visual feast across the pages.

Get a closer look at your cast of playable Warlords and the lands you will conquer with them. One side outlines the vast geography of China as it sits before you, the other introduces you to the varied characters and playstyles at your disposal.

The Collector’s Edition is available exclusively in limited numbers via http://bit.ly/3KCOLLECTORS. 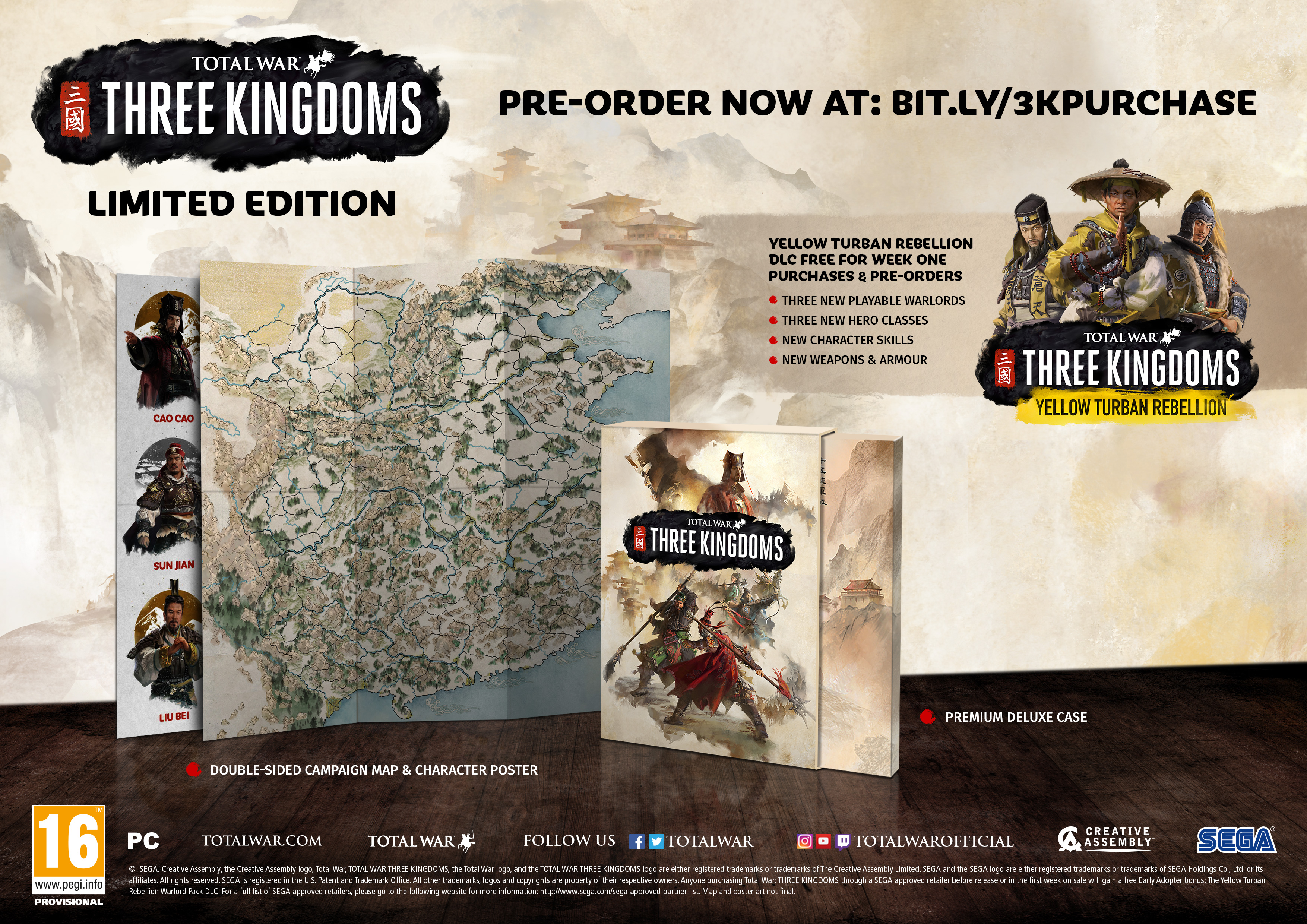 Those who pre-order the Limited Edition or buy it within one week of release will also get the Yellow Turban Rebellion Warlord Pack DLC for free.

Do I have to pre-order to get the Yellow Turban Rebellion Warlord Pack DLC for free?

No, it’s an early adopter bonus. You can buy Total War: THREE KINGDOMS in the first week after release and still get it for free as well.

Do I have to pre-order or buy in week one to get the Yellow Turban Rebellion Warlord Pack DLC ?

No, you can also decide to buy it when it releases, or at any time in the future. But it’s only free when purchasing THREE KINGDOMS as a pre-order or in the first week of release.

Will reviews be available before release?

Yes. We will make sure that both journalists and YouTubers will have the game early enough that they can publish their reviews before launch day.

Why do you offer a bonus for pre-ordering?

We obviously want our games to be played by as many people as possible at launch, so it’s useful and very effective for us to reward early adopters. We could promote the game’s launch through advertising in other ways (like buying adverts on websites) but we think that spending marketing on creating content for the game that can then be offered for free is also a good way of promoting it.

What game is the Early Adopter Warlord Pack DLC for?

What’s in the Warlord Pack DLC?

When does it come out?

On March 7th, alongside the release Total War: THREE KINGDOMS, it will be available free. A week after that, it will go on sale at full price.

Do I need to pre-order to get it?

What Editions of the game are being released?

There are three different editions. A digital version, a Limited Edition, and a Collector’s Edition.

Where is the Collector’s Edition Available?

Exclusively from our webstore here: http://bit.ly/3KCOLLECTORS

What’s the difference between the Limited and Collector’s editions?

The Collector’s Edition comes with a range of items in a sleek presentation box; including a weighty resin statue of the legendary hero Guan Yu, a faux-leather book containing a trove of beautiful and exclusive artwork, a double-sided campaign map & Warlord poster, the Premium game case, and the Yellow Turban Rebellion Warlord Pack DLC.

The Limited Edition includes a double-sided campaign map & Warlord poster and Premium game case. The Yellow Turban Rebellion Warlord Pack DLC is also included for anyone purchasing the Limited Edition through a SEGA approved retailer before release or in the first week on sale. You can find a full list of retailers selling this edition here: http://bit.ly/3KPURCHASE

Does the Collector’s edition only come with a CD copy of the game?

No, it will come with a CD copy and a Steam key.

Do all Early Adopters get the Warlord Pack DLC for free?

Yes, anyone who purchases Total War: THREE KINGDOMS in the early adopter period from a SEGA approved retailer will receive the Yellow Turban Rebellion DLC for free.

When is the payment taken?

For pre-orders, you will be contacted a few days before shipping and will be reminded that your account will be debited.

What if I want to cancel/refund my order?

For any inquiries pertaining to a return, please contact our customer support.

You can order your Collector’s Edition: http://bit.ly/3KCOLLECTORS

Will I definitely get my order on day one?

We do our very best to deliver your order on the day of the release. However, shipment delivery may vary according to your location or shipment method. As soon as your package is dispatched, you will receive a tracking number by email, giving you an estimated delivery date.

Are there a limited number of Collector’s Editions available?

Yes, these editions have been produced as a limited run and as such there a fixed number of copies. Once those have sold out, there won’t be any additional units being created.

How will I get my Warlord pack DLC if I order the CE?

Email addresses will be taken at checkout and people will be emailed their codes when the product goes live.

Are there delivery charges on top of the cost listed?

Nope, these are including in the cost of the Collector’s Edition.

Where do you ship to?

You can also check the list of authorized countries when submitting your shipping information at checkout.

Who should I contact if I have any questions about the CE or the delivery of the Collector’s Edition?

Will the game be released on Mac and Linux?

Yes, Feral Interactive is working on macOS & Linux versions that will release shortly after the Windows release. You can expect those to land later on in Spring 2019.

With the introduction of The Furious Wild Expansion Pack comes the ...

English A World Betrayed portrays a seminal moment in the history o...

English The Mandate of Heaven chapter pack depicts the events of th...