Total War: WARHAMMER II – The Queen and the Crone FAQ

What is The Queen & The Crone?

The Queen & the Crone is our first Lords Pack DLC for Total War: WARHAMMER II. Bolstering the forces of the High Elves and the Dark Elves, it introduces two famous rival characters and new iconic units from the world of Warhammer Fantasy Battles to your campaigns and battles.

As for Lord Packs for the first part of the trilogy, we’ve intended to focus the DLC around a legendary rivalry from the Warhammer Fantasy Lore; and what could be more of a rivalry than between the Everqueen and the Crone? What’s more we’ve been listening to the feedback from the community following the Steps of Isha Free-LC release and our in-game metrics, this time really focussing on campaign replayability and picking units for this pack that emphasise and suit the new Lords.

The design team’s intent here is to deliver really different and exciting campaign playthroughs, packed with character, for both the Eye of the Vortex and Mortal Empires campaigns. We’re always watching for interesting feedback and impressions though, so let us know how you get on.

The content in this pack is available in both the Eye of the Vortex and Mortal Empires campaigns and It will add:

Commanding the High Elf faction of Avelorn, Alarielle’s power is that of nature itself. As she travels through the Elven lands, she brings great joy to the people, improving public order and reducing corruption. However, she is also subject to the Mortal World’s Torment; as Chaos seeps into the world, her battlefield powers wane. Only reducing and ridding of Chaos armies will return her to her full powers.

Alarielle is a mixed-lore Caster, with access to a blend of Life magic and High magic. She may embark on a quest for her Legendary Item, the Star of Avelorn, and may be upgraded to ride an Elven Steed, Barded Ithilmar Steed, and a Great Eagle. She can also recruit Forest Spirit units such as Dryads, Treekin and Treemen.

Alarielle also has a unique campaign mechanic called Defender of Ulthuan. It is her sacred duty to see that the inner and outer territories of the High Elves’ home are kept free of enemy occupation. While they remain clear, they bestow powerful benefits. Should invaders sully Ulthuan with their presence however, the Asur’s trust in Alarielle will fall, bringing a suite of negative effects.

Alarielle has access to a unique Rite: The Invocation of Lileath. Once active, this rite brings a suite of benefits to Handmaidens, Sisters of Avelorn and Dryads. 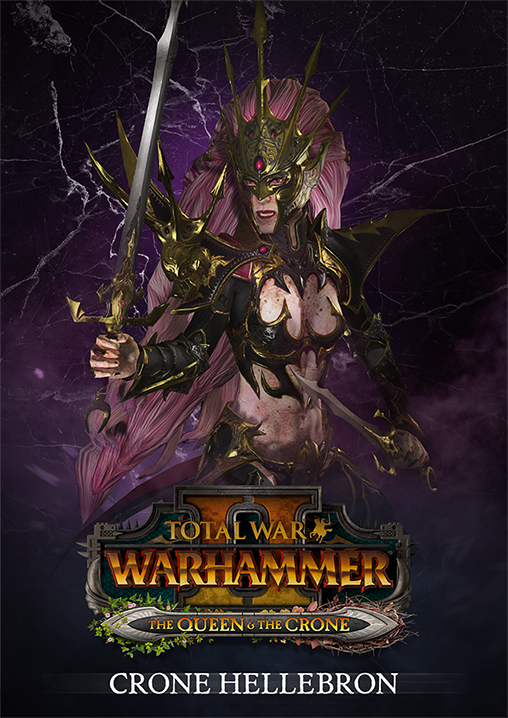 Hellebron the Hag-Queen leads the forces of Har Ganeth, a uniquely murderous Dark Elf faction. She may periodically call a Death Night, expending slaves on a night of murderous rampage, to keep her powers strong. Failure to regularly hold these festivals will have a detrimental effect on Hellebron. As each Death Night is called, nearby Dark Elves undertake the Blood Voyage, raising an army in thrall to Crone Hellebron, and in whose post-battle rewards she shares.

Hellebron gains massive upkeep reductions to Witch Elves and Har Ganeth Executioners and Sisters of Slaughter, which she can also improve via her unique skill tree. She may embark on a quest for her twinned Legendary weapons, the Deathsword and the Cursed Blade, and may be upgraded to ride a Dark Steed, a Cauldron of Blood, and a Manticore.

Hellebron also has access to a unique new Dark Elf rite: Sacrifice to Drakira. Once active, this rite brings bonuses when fighting High Elves, a reduction in diplomatic relations with High Elves, and rank bonuses to both Death Hags and Witch Elf units.

Will the Legendary Lords be available in the both the Eye of the Vortex and Mortal Empires Campaign?

Yes, The Queen & The Crone will be available to play in both the Eye of the Vortex and Mortal Empires Campaign.

When is Norsca and the 30th Anniversary Regiments of Renown coming to my Mortal Empires Campaign?

On May 31st alongside the release of the Queen and The Crone. If you own these DLCs already for TW:WARHAMMER, they should automatically appear for you to use in game.

If you own TW:WARHAMMER and haven’t yet picked up your free 30th Anniversary Regiments of Renown, join or log into your free Total War Access account. Find out more here: https://www.totalwar.com/regimentsofrenown

Will the Legendary Lords in TQ&TC be fighting for control of the Vortex?

Both Alarielle and Hellebron will fight for the control of the Great Vortex alongside their new unique faction mechanics, which can be experienced in this campaign and Mortal Empires.

What’s the Free Content that will come alongside the DLC?

Alith Anar will be a new, free Legendary Lord coming free alongside The Queen & The Crone, as well as his personal Shadow Walker unit. We’ll share more information on him soon.

What’s in the Free Update that will come alongside the DLC?

The Resurgent Update will contain lots of tweaks, fixes and additions to Total War: WARHAMMER II whether you purchase the DLC or not. We’ve already mentioned a few of these as part of Tuesday Newsday. Some additions we hadn’t mentioned yet, so stay tuned for full patch and update notes coming soon.

…But this is not all. The Druchii possess a dark and powerful weapon.

When blood runs in rivers and the air is choked with Death, the chains will break and this monstrous secret will be unleashed.