Total War: ELYSIUM brings together Generals from throughout history and places them within the eponymous city of Elysium, where they battle it out to determine who is the greatest strategist of all time.

As such, the game features a multitude of characters with hugely different personalities and fighting styles, so it is important that each General has their own look and feel distinct from the others. For example, the fierce Shieldmaiden Lagertha will look and feel vastly different from the young queen Marie Antoinette. We spoke to our art coordinator Heather Reynolds to find out just how we manage to pack all of that into one image – here’s what she had to say…

One of the exciting aspects of creating the General portraits is the fact that some characters do appear in existing Total War titles while others are completely new to the Total War universe. Existing characters, such as Penthesilea from TROY, should adhere strictly to their look from the original game. To enable this, where possible we source the original concept art to use as the main reference and ensure we depict them with the relevant armour and weaponry. Meanwhile, newcomers to the Total War franchise are permitted a bit more freedom. Marie Antoinette, for example, didn’t have any existing character art so in this case we referenced a mixture of visual historical depictions (paintings, film, historical descriptions) for inspiration. 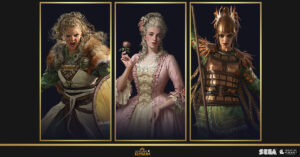 Our typical process for creating the portraits is not too dissimilar from the card art production – we outsource the work to some talented freelance artists who I work closely with throughout the process from initial sketch to final artwork.

As well as continuing the card art principle of strong silhouettes and vibrant colours, the General portraits must also adhere to the following:

As an existing character who appears in TROY, it was vital that ELYSIUM’s version of Penthesilea appeared consistent in both look and feel. We worked closely with the TROY team, who very kindly provided us with the original concept sheet (seen below).

The original concept art is such a good resource for us to be able to share with the artist as it provides a clear blueprint for how to approach the character’s appearance and armour, and also breaks down the smaller components such as the helmet and other accessories such as belts, shoes, and hair styling. 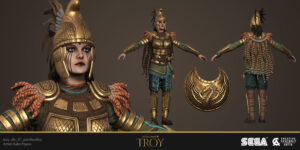 Penthesilea: adapting the character for ELYSIUM

Penthesilea was a member of a legendary race of warrior women – the Amazons. She was highly skilled with weapons, very wise, and extremely beautiful. This is exactly what we wanted to see in the final portrait. It was also important to ensure she felt unique from the other Generals.

Thus, in contrast to Lagertha’s direct and confrontational angry expression, we chose for Penthesilea to instead appear concentrated on her enemy, burning with emotion. Likewise, we wanted to accentuate her cat-like agility in her posture and menacing expression. We briefed the artist, who provided us with a good variety of strong initial sketches: a set with the helmet, and a second set of sketches without. 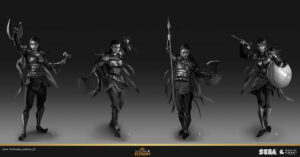 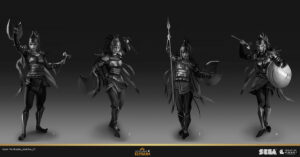 While each sketch had pros and cons, we ultimately chose to progress with sketch 3 – we thought the posture perfectly captured the points in the brief. We felt sketch 3 captured the calm before the storm, an intense mood. She looked menacing and threatening but in a distinctive way that contrasted nicely against the other TROY Generals in ELYSIUM (Agamemnon and King Priam). We also felt this had a silhouette we had not seen before and cleverly showcased the crescent shield and long spear that appear in the TROY reference. While we did like the iteration without the helmet, we ultimately felt it was too important not to include. 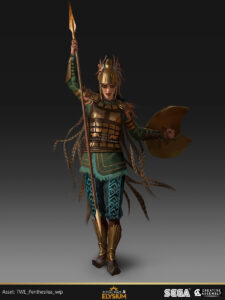 The artist then sent through the first colour sketch. Even at this early stage, we saw a strong sense of the character’s personality coming through. The black paint around the eyes and dark lips helped to intensify her expression and worked nicely against the bronze armour. We double checked it against the original reference for consistency before giving any final notes to the artist.

Now we had the overall composition and colour palette approved, the artist could begin to add the final details, resolving any loose mark-making and refining the lighting to create a polished portrait. Finer details were added to the face such as freckles and a sheen of sweat, conveying the fact that the character has spent hours in the sun fighting. Likewise, the artist spent a lot of time polishing the armour and adding the texture effects to really bring the piece to life. 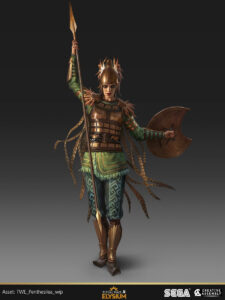 Now that you know how history’s greatest Generals take form in ELYSIUM, why not live out their exploits for yourself? Sign up to the closed beta here!

And, if you’re after more looks behind the game dev curtain, check out our latest blog covering how ELYSIUM went from a simple paper prototype to the unique CCG experience we know today!

In our next update, we have a brand-new General joining the ranks o...