Home › Blog › “They did have mead and beer, so I’m sure I would be okay”: an interview with a modern-day knight

As we observed in our inaugural Total War IRL article, the Total War games definitely have more lance-wielding knights between them than you can shake… well… a lance at.

Unfortunately, we are not yet equipped with the technology to go back in time to the medieval period, nor are we able to nip over and have a quick tête-à-tête with our friends the Bretonnians – but we do have the next best thing!

We chatted with the man behind Sir Hector of Horsham, the Loxwood Joust’s very own dastardly Black Knight, about stunt riding, giant robots, and just how well he’d do if he came up against a medieval knight himself… 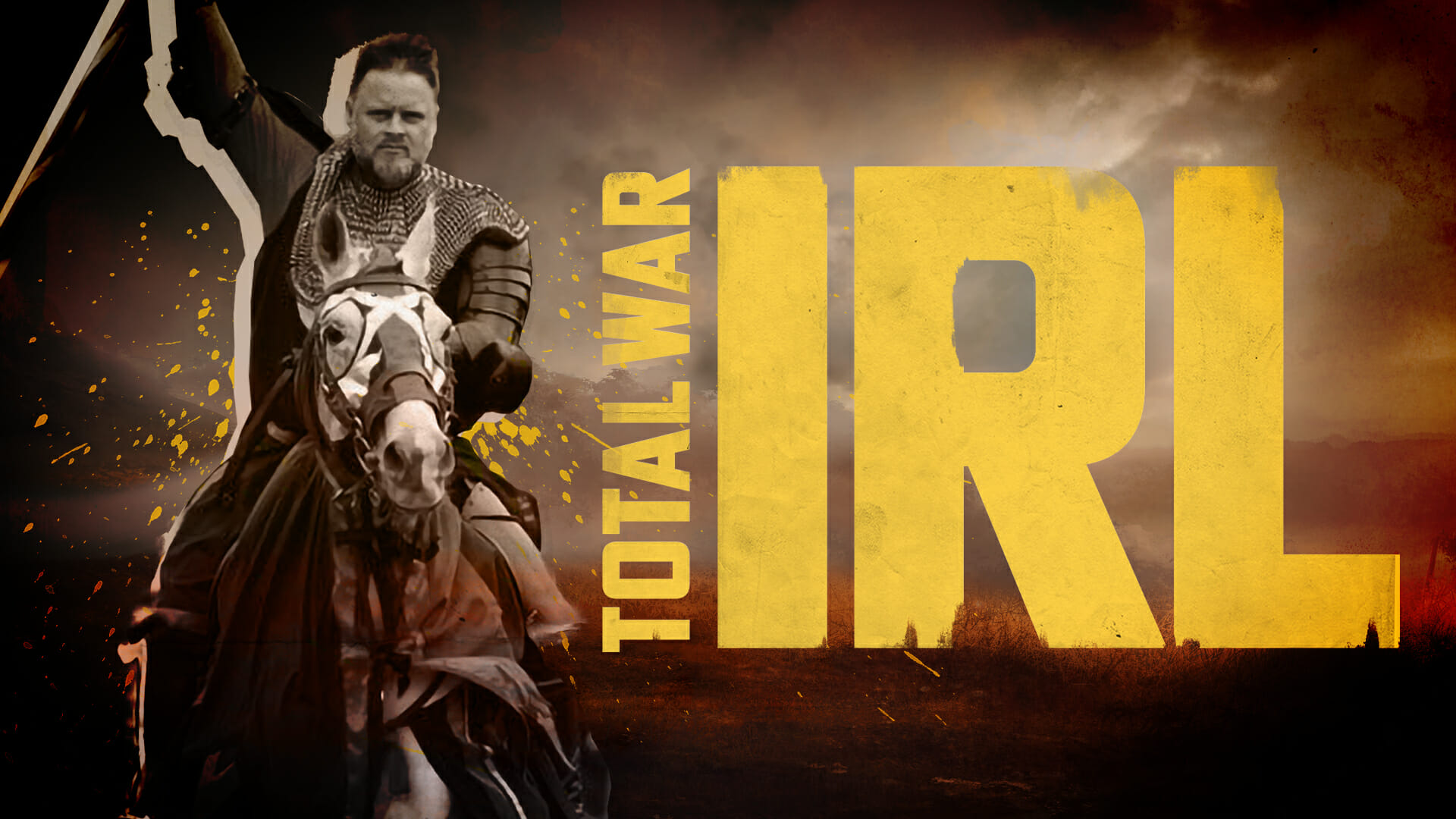 CA: Hi there! First of all, could you please introduce yourself?

CA: Who do you play at the Loxwood Joust?

CA: Do you think you share any characteristics with Sir Hector?

Daniel Fowler-Prime: Well, yeah – we look alike.  Sir Hector is a caricature of me: a rogue who will stand up against authority doing what he wants, when he wants. Sir Hector has a very clear and defined moral code – it’s just not necessarily the same moral code as everyone else. I can get away with far more as Sir Hector – he is not restricted by what people or society expect of him.

CA: How did you get into jousting and stunt riding?

Daniel Fowler-Prime: That’s a long story. In short, I went to school with a guy whose family worked with horses in film, TV, and stunt shows.  When I was 17, I went along to help out for the weekend and basically kept going back. 22 years later, I’m still doing it.

Daniel Fowler-Prime: No, not until I saw it at my first show at 17. At that point I thought: “That’s cool, I want to do that.” I was lucky enough to be in a position to learn to ride. To be honest, a lot of my training was on the job.

CA: Would you consider yourself a history enthusiast?

Daniel Fowler-Prime: Yes and no. I have an interest in history. In my personal life, my special subjects are World War II, Egypt (the pyramids in particular), monolithic and other ancient structures, ancient civilizations around the world, and Sumerian cuneiform texts. I also enjoyed Time Team when it was on.

Professionally, I have a good historical knowledge of jousting and of course the use of medieval weaponry. I have been fortunate enough to work at a lot – if not most – of the castles in the country.

I also know a lot about how horses have been used in battles and wars throughout history. I have worked on a number of films where we have recreated battles and trained horses for battles. This gives me a unique perspective on how battles worked and how effective horses were in certain historical situations.

Daniel Fowler-Prime: I would think better than most, but I would only give myself a 30% chance of surviving a fight with a medieval knight or being able to live off the land without any help or learning more basic survival skills.

I would not miss creature comforts as long as I had a dry house or hut, which I could just about build with willow, manure, and some trees – though I would prefer to be a lord or a knight with my own castle. I would not miss modern tech – a simpler life has its appeal. Plus they did have mead and beer, so I’m sure I would be okay.

CA: How is the Loxwood Joust different from other events for you?

Daniel Fowler-Prime: Loxwood is different to other events – it’s a perfect balance of historical accuracy and entertainment. The audience gets to experience a story set in medieval England first-hand – there are no medieval events in the country like it. The Loxwood audience is also very unique. Unlike any other show I have ever been involved with, people come back year in year out and are invested in the characters, which has allowed us – the jousting team – to develop the show far beyond the standard meat and two veg good knight, bad knight storyline. I would describe our show as a play based around a joust.

CA: What unique challenges does working at the Loxwood Joust present?

Daniel Fowler-Prime: Mainly the local bicycle race that happens at the same time, so sometimes the team struggle to get on site from their hotels. Also I miss the local 12-hour lawnmower race, which always clashes.

CA: Aside from the Loxwood Joust, what other historical events or shows do you do?

Daniel Fowler-Prime: Over the years I have worked at historical events all over the country, from ramshackle reenactment events to Warwick Castle and the Camelot Theme Park.

CA: What’s the most unusual jousting or stunt-riding job you’ve ever done?

Daniel Fowler-Prime: Probably the most unusual (i.e. not of the norm) was the battle scene at the beginning of Transformers: The Last Knight.

It was unusual because of the intense level of explosions and the extreme environment we were filming in. It’s hard to describe, but if you watch that part of the movie the only CGI is the dragon – the rest of the explosions are very big and real. I had never seen anything like it before. They basically blew up half of Surrey.

CA: Do you play many video games?

CA: Have you ever played any Total War games?

Daniel Fowler-Prime: Briefly. My brother had one of the games and a messed about with that a little bit. I used to enjoy strategy games – I was a big fan of the Empire series years ago. Thinking about, I should probably get a new strategy game…

CA: What advice would you give people wanting to get into jousting or stunt riding?

Daniel Fowler-Prime: Learn to ride first. Learn to ride well. Spend time becoming a horseman. This can take years and some people never manage it. When you perform, it should not be for your personal ego. It should be for the overall show, audience, or production. It’s not about the individual, it’s about the bigger picture you are painting.

The other thing is this: like in sport, 95% of the job is behind closed doors and mostly not paid for. The show is the other 5%.

There’s more in store for Total War IRL, so stay tuned! You can also check out some of our other behind-the-scenes interviews here!

Home › Blog › “They did have mead and beer, so I’m sure I would be okay”: an interview with a modern-day knight 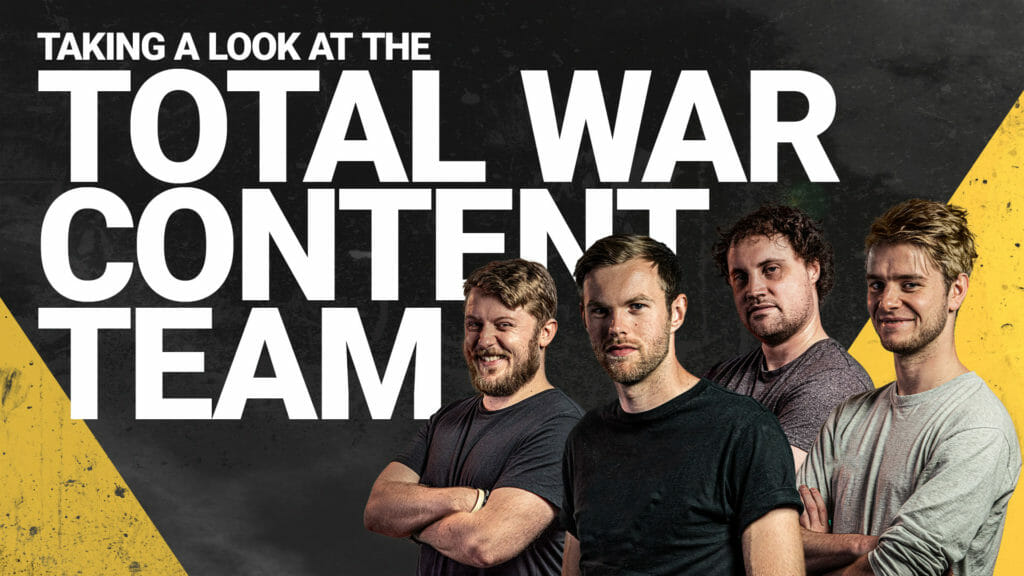 “Talking and reading chat at the same time – it’s harder than it looks!”: taking a look at the Total War content team

If you’re a Total War fan, chances are you’ve watched something cre...