Hello Total War: WARHAMMER fans! Over the past few weeks, months, and even YEARS, there’s been a healthy debate within the community as to how we approach the implementation of certain races in the Total War: WARHAMMER games. Nowhere has that been more apparent than the split between the Warriors of Chaos, the Daemons of Chaos, and the “Monogod” races (Tzeentch, Slaanesh, Khorne, and Nurgle).

With that discussion rising to the forefront following the reveal of the Champions of Chaos, we wanted to take a moment to sit down with our design team and get their thoughts on the process behind it. So today, we’re here to provide you with a clear picture of what, why, and how we’ve split the Lords of Chaos, as well as the role it will play in our forthcoming DLC!

(You ready for a super deep dive? Let’s go!)

Why are the four new Legendary Lords considered “Warriors of Chaos?”

With this being the first Warriors of Chaos Lords Pack since 2015, we wanted to reintroduce this iconic race in a way that was befitting of their infamous world-ending reputation. To that end, introducing four Legendary Lords—each of whom is aligned with one of the four Chaos Gods—was a flavorful way to start, particularly given that we already have two Undivided Lords in the form of Archaon and Kholek.

Beyond the flavor that each Champion could bring to this Lord’s Pack, we found that several design elements aligned exceptionally well with the revamped Warriors of Chaos mechanics. For instance, the vision for Azazel was that he’s been sent out into the world to find and lure promising Undivided champions into devoting themselves to Slaanesh. He’s basically an evil talent scout—a role implied as far back as Morkar the Uniter, who may have been persuaded along his path to become the first Everchosen way back in the days of Sigmar. 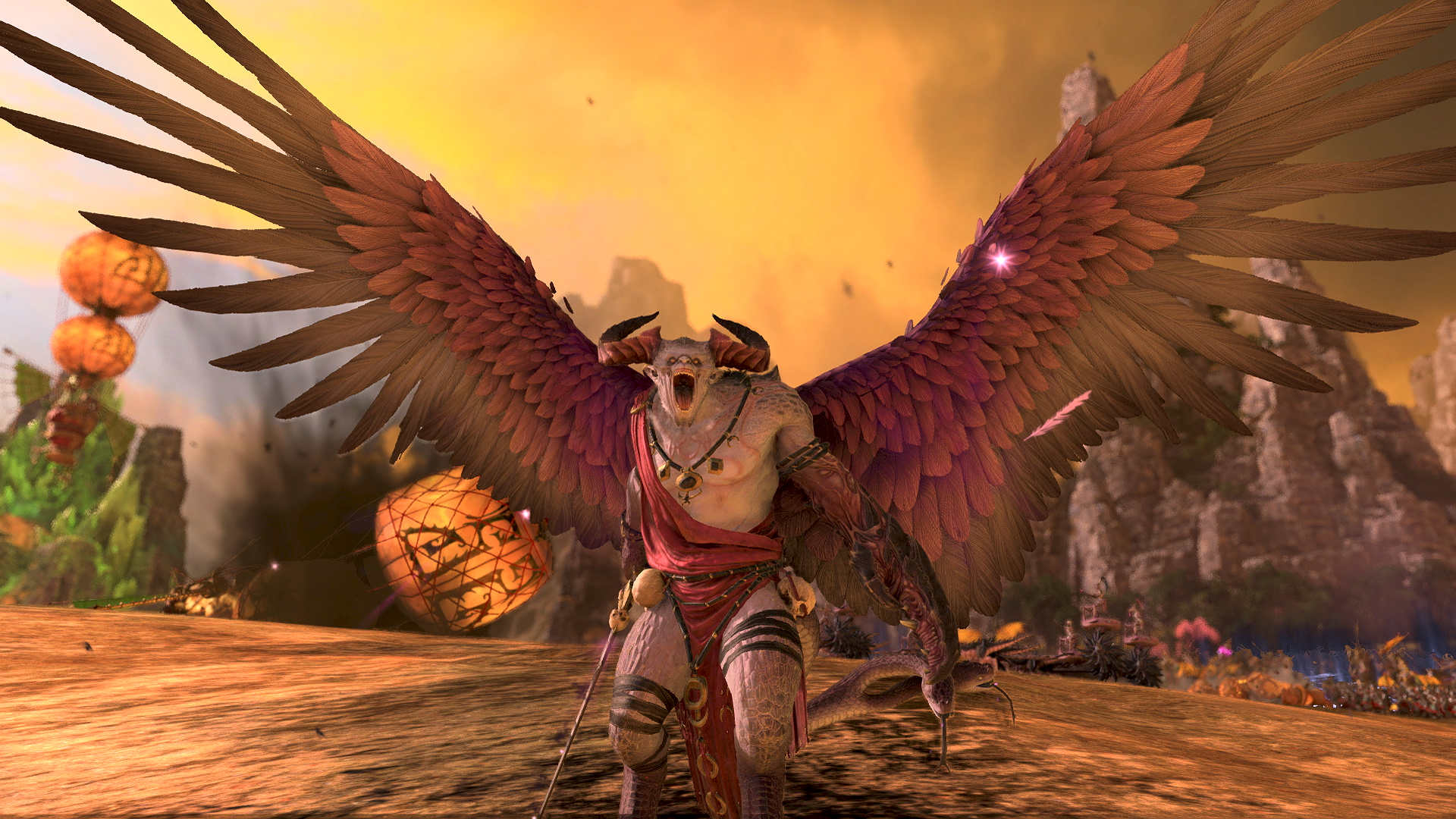 For some characters, it would have been very hard to find a niche for them in the Monogods roster. Festus is a good example here; he’s a durable Lore of Nurgle spellcaster who’s a master of brewing plagues…but how do you make him interesting alongside Ku’gath, who’s better at all those things in addition to throwing exploding Nurglings? The answer: put Festus in the Warriors and you’ve *immediately* got a combination of features that’s entirely unique!

Finally, this approach allowed us to push the quality of the pack far higher than we could have otherwise. Having the whole team laser-focused on a shared feature-set meant that every single playtest, improvement, and bug fix benefited all the characters rather than one.

It needs to be stressed, though, that even in this context, our goal was to create four Warriors of Chaos experiences that feel like Khorne, Nurgle, Slaanesh, and Tzeentch—much in the same way that Wulfhart and the new Volkmar feel like Empire factions even though they don’t share the same mechanics as Karl Franz. These are true hybrids: drawing a ton of flavour and gameplay from their relevant Dark God. They’ll be fully capable of running armies that will look very much like the ones you’d see when playing as the relevant God-specific race…but with Dragon Ogres!

Where does this leave the ‘Monogod’ races of Khorne, Slaanesh, Nurgle, and Tzeentch?

It’s important to state: the new DLC characters existing within the Warriors of Chaos race DOES NOT prevent us from adding mortal characters to the Monogod rosters.

This is something we confront on a DLC-by-DLC basis. In some instances, mortal characters might fit better alongside a Daemon-focused roster or the Monogod mechanics; in others, the roster might end up with wildly different, bespoke feature-sets more appropriate to the given faction. Don’t worry; there are plenty of exciting characters who will be joining the Monogods in the future….

It’s also worth stressing that this pack will still massively transform the Monogod playstyle. In some cases, their rosters are almost doubling in size, with each God gaining a new hero and two lords to lead their armies, topped off by the ability to convert Mortal Lords into Daemon Princes. Even older heroes are getting updated: with Cultists now riding the new Warshrines into battle as mounts. Combined with a ton of balance changes and the new Immortal Empires starting positions, we’re pretty sure the Monogods will offer a ton of fresh, new experiences.

Why are there two Slaanesh Legendary Lords in the Warriors of Chaos?

With hindsight, everything is much clearer…

It’s fair to say that if Sigvald hadn’t already been in the game since 2016, he would have (undoubtedly) been the Slaanesh Champion in Azazel’s place. Beyond that, we wanted to ensure that all four of the Dark Gods had representation within this pack in order to provide you with a larger variety of Legendary Lords to play at launch. Plus, we really like the Swiss Army Knife dynamism that Azazel brings to the roster! 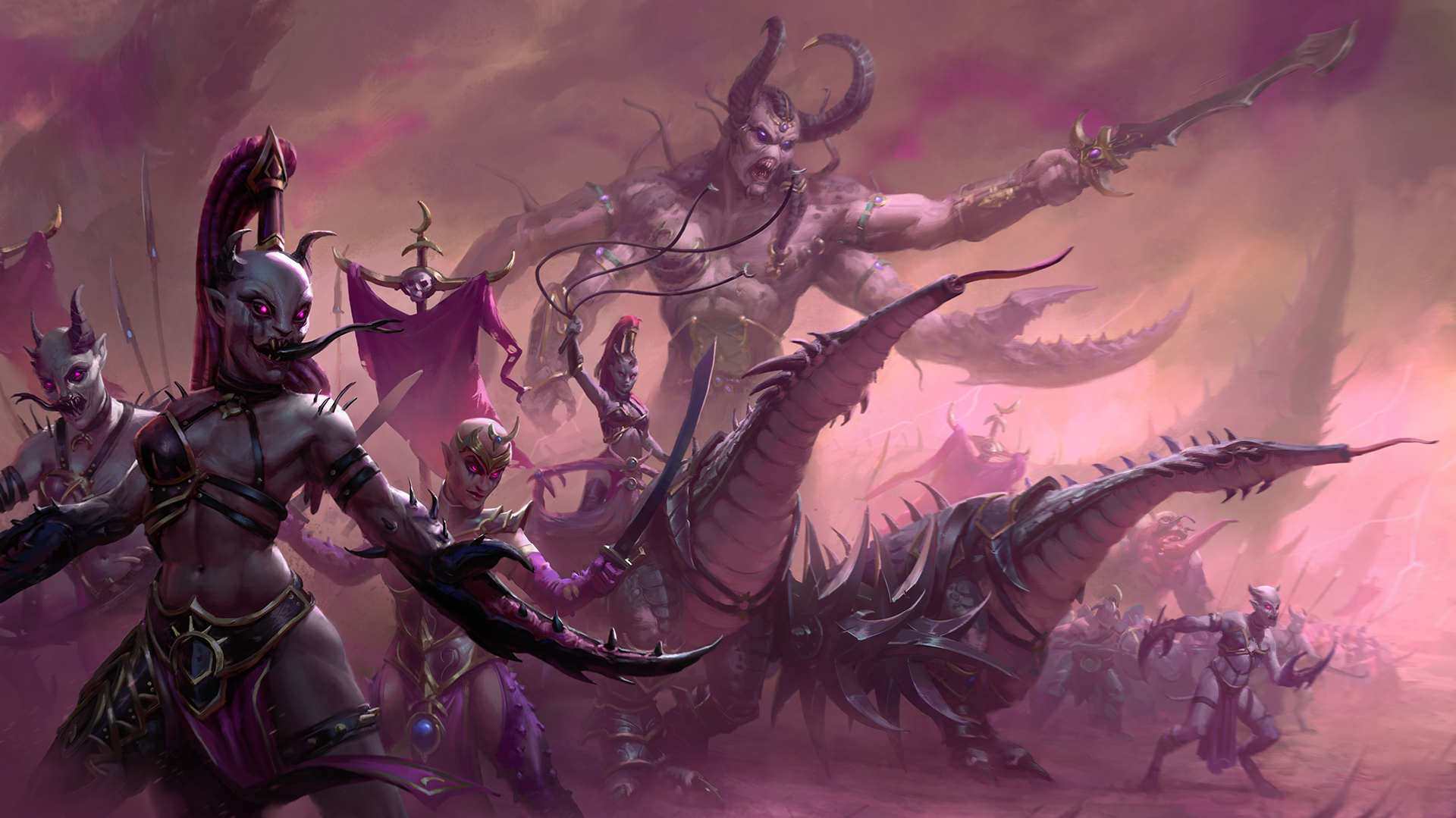 Ultimately, our aim has been to ensure that both Slaaneshi Lords offer a distinct playstyle. As Azazel is a Daemon Prince, he has a narrower choice of units to recruit from, solely focusing on Undivided and Slaaneshi units, whilst Sigvald has the potential to branch out into units from all four pantheons and Undivided. That’s not to say you’ll see Sigvald leading armies of screaming Khornate berserkers or festering Nurgle-worshipers: due to the Dark Authority system (see below) Sigvald’s own personal retinue will maintain a distinctly Slaanesh flavour and he’ll need to do some delegation to others to efficiently maintain units devoted to other Gods. So, even though there’s only one Lord in the Slaanesh race, you’ve got three *very* different ways to play a Slaanesh-themed campaign.

How do the unit rosters work in a Campaign?

While the Warriors of Chaos can eventually access a truly vast array of mortal and daemonic units, it’s not just a case of constructing specific buildings and spewing out multicoloured units… Much like the lore, you’ll have to work hard to amass the forces of multiple Gods, and certain characters will find it easier (or more difficult) than others. 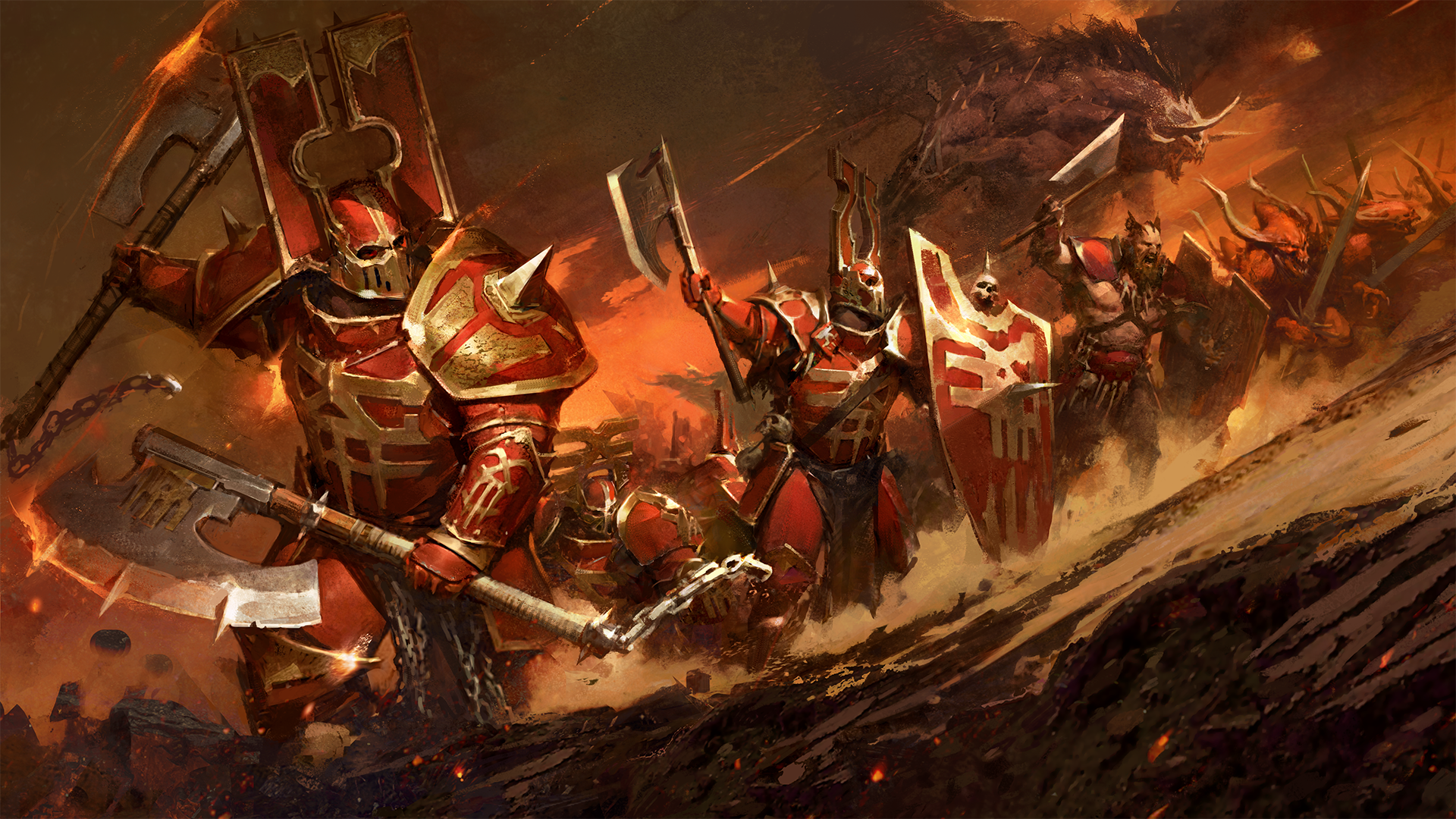 Every unit in the roster is treated as either a “Warband” unit or a “Gifted” unit. Warband units are your bread and butter: consisting of Mortal humans as well as the bulk of the Undivided monstrous units. Almost all of them can be “Marked”—an act that devotes them to a specific God and turns them into a new unit with new visuals, stats, and even new voice lines—though you can’t necessarily Mark a unit right from the start.

Gifted units are primarily Daemons accompanied by a few specialist, non-Daemonic units—such as Hellcannons and Shaggoths—and are recruited by spending Souls on Chaos Gifts (hence the name) or via certain special events. The catch? There’s a cap on the number of these “Gifted” units you can have in any given army; that is, unless you’re Be’lakor, who can recruit as many as he likes! Like Marks, these options aren’t necessarily available from the very start of your Campaign.

In fact, the specific conditions for unlocking these options is one of the key ways we’re differentiating the individual factions. For example:

On top of these special conditions, a “Dark Authority” system restricts which units you can include in any given army. God-specific units won’t simply follow anyone… For example, if you want Nurgle followers or Daemons in your army, you’ll need a Nurgle lord or hero in the army to keep them in line; otherwise they’ll suffer from increased upkeep and reduced replenishment. And if you try and put Khorne units in an army with Slaanesh characters or (Gods forbid) a wizard, you’ll need to make sure there’s a proper Khornate character present to balance things out. We really want to sell the idea that these “Warbands” are perilous coalitions of rivals, forcing you (the player) to think carefully about how you organize your armies.

Comparatively, the four new DLC Lords are almost akin to a sub-race within the Warriors: Lords who are more closely aligned to their specific God, and thus limited in their access to the full suite of Marked units in lieu of their patron God’s specific units alongside the Undivided. To accommodate this sacrifice, they instead gain a variety of specialist advantages:

There’s also a ton of other variations we’ve made where appropriate; for example, vassals belonging to the DLC lords will take on certain attributes from their masters: spreading their favoured corruption and gaining thematic bonuses in battle. They’ve even got unique ways to keep their troops in line; Festus, as an example, can get more Nurgle Authority by bestowing his armies with plagues, making it easier for him to put Nurgle troops in Undivided-led forces. 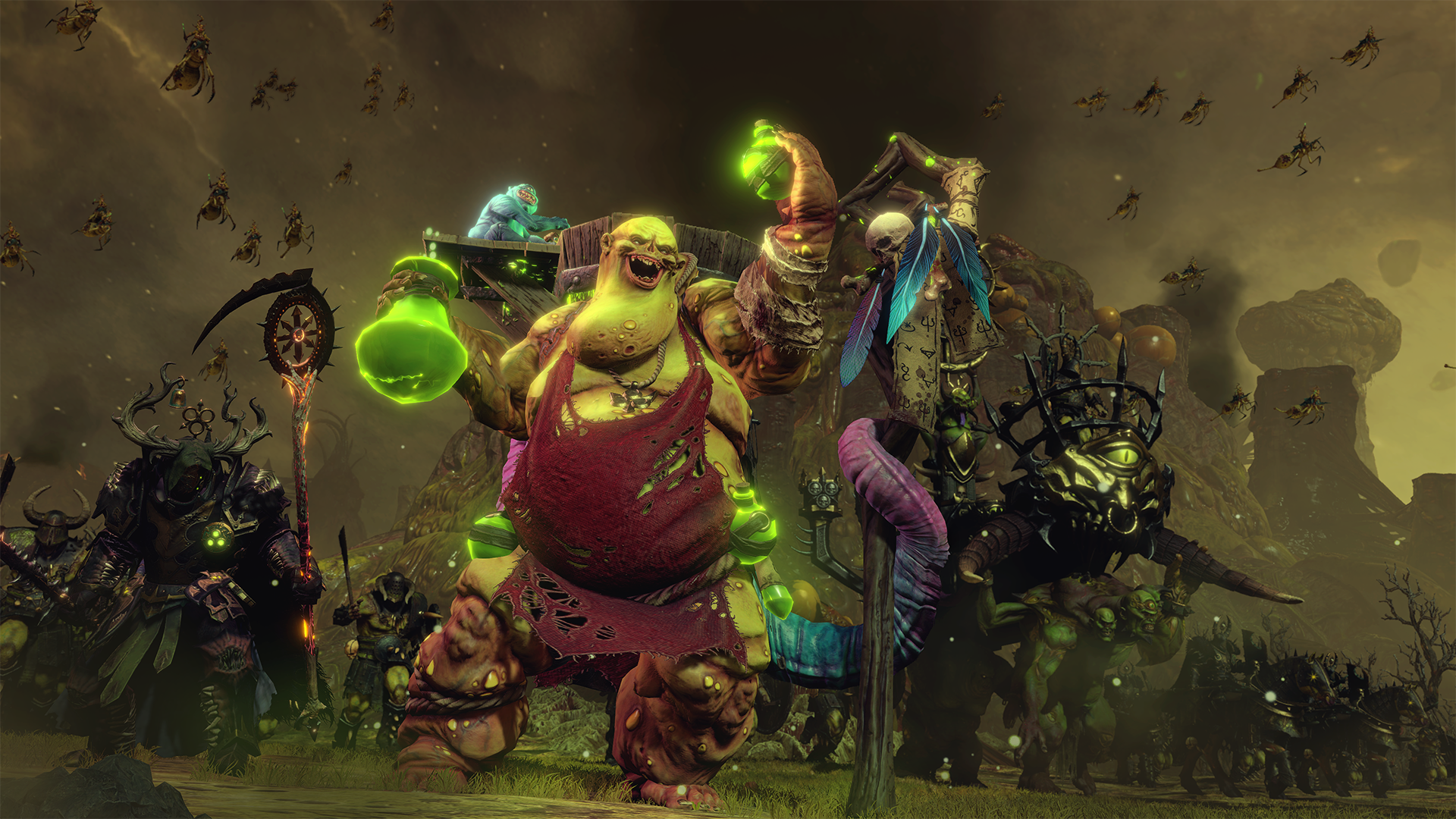 All in all, we’ve tried to make these four Champions feel different from the rest of the Warriors of Chaos. Our dialogue engineers have even gone so far as to ensure that units in these characters’ armies use different voice lines when led by one of the characters; you’ll hear Marauders and Warriors and Chosen in Azazel’s army shouting about their allegiance—not just to Slaanesh, but to Azazel himself!

On top of all that, they also participate in a brand-new Campaign set on the Realms of Chaos map, which offers a dramatic narrative following the main game’s Ursun storyline. It’s a nifty, alternate take on the Rifts system: one with more control in the leadup to a truly epic finale.

Initially, the team were aiming for Archaon (at minimum) to be able to confederate all the Warriors of Chaos. However, there were some significant technical and balance issues that we were unable to resolve in the time we had to implement the rest of their feature overhauls. Given the technical issues, we were concerned that launching with confederation enabled could jeopardize the core experience of the Warriors of Chaos; as such, we chose to disable the option for the initial release of Immortal Empires.

With that said, we know that this is important to you, and will be looking to enable some form of confederation for the Warriors in a post-release patch. We’ll talk more about how we’ll aim to accomplish that feat in the future! 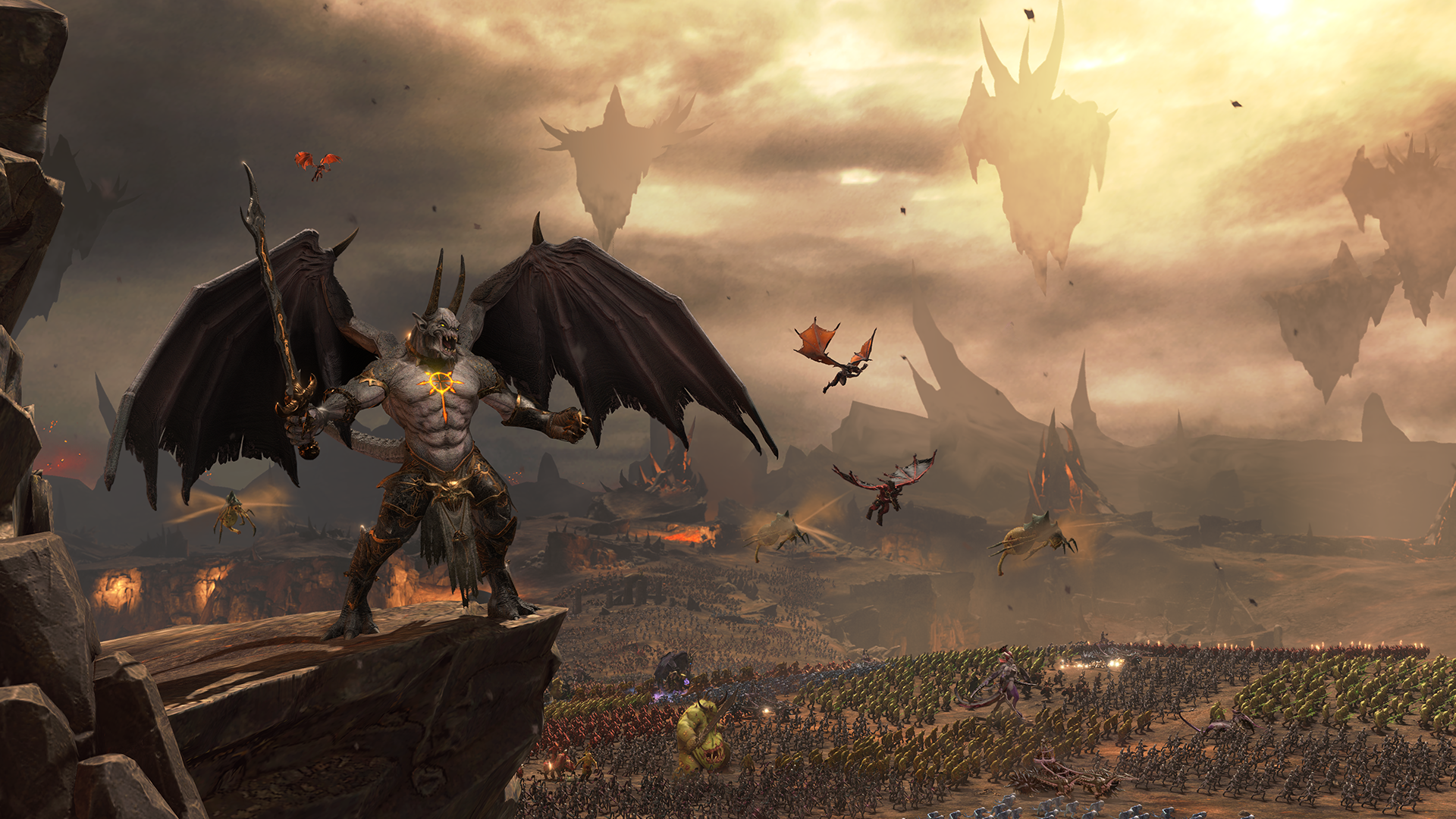 We hope this offers clarity into our design process and helps you understand where our four newest Legendary Lords are landing in the WARHAMMER III roster! As mentioned before, there’s still room for adjustments and changes, so we look forward to hearing what you think when you get your hands on them this August.

Check back next week for another look at an upcoming Champion, as well as more details about Immortal Empires!