Hello, Total War: WARHAMMER fans (or should we call you “Champions” of the WARHAMMER community?)! Today is a very exciting day, as it’s not only time to unveil the Champions of Chaos Lords Pack for Total War: WARHAMMER III, but announce that it will be releasing on August 23rd alongside Immortal Empires.

Fit for a champion, the game’s first Lords Pack welcomes not two, but FOUR, new Warriors of Chaos Legendary Lords—each of whom will be aligned with one of the four ruinous Chaos Gods. Embark on crusades of destruction with brand-new gameplay features, wreak havoc with a host of new battlefield units, and master the new narrative-driven campaign mechanics that will unearth the fabled path to Zanbaijin.

WHAT’S IN THE PACK?

While we’ll be introducing you to each of the four new Champions of Chaos over the next few weeks, we’re going to get started right away by spotlighting the first Legendary Lord: Azazel, Prince of Damnation! 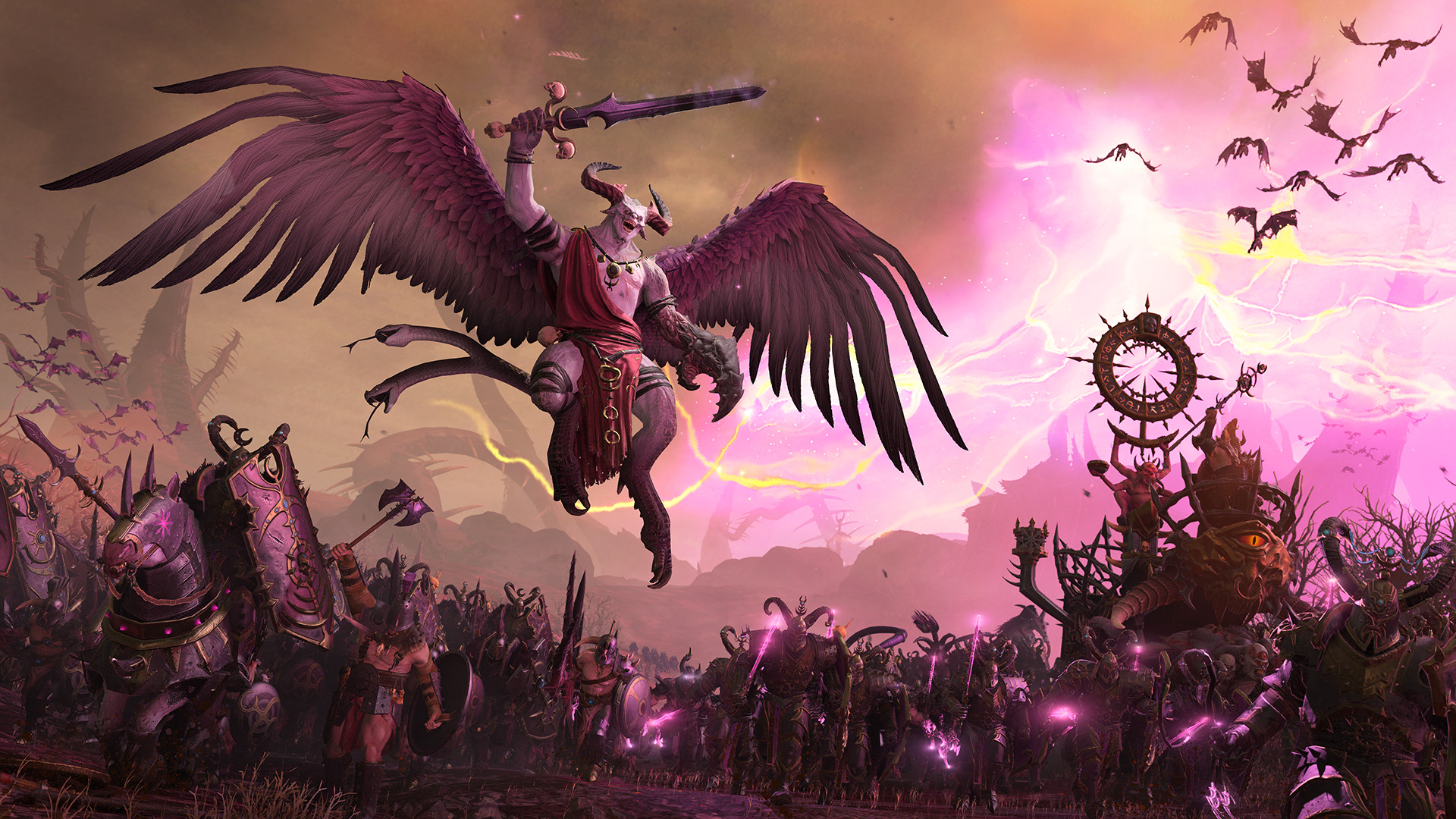 A prince amongst Daemons, Azazel has been the bane of humanity since time immemorial—his constant acts of devotion and debauchery assuring his high standing in the eyes of Slaanesh. All who know of him dread to face him in battle, for the cost of losing means not only the death of the body, but all the horrific certainty of the soul’s eternal damnation.

Azazel is the Swiss Army Knife of Slaanesh—capable of inflicting hellish causalities in all aspects of battle. In close combat, he has access to the “Temptator” ability: granting a temporary ward save and reflecting any damage upon those who dare attack him. In a support role, he can call upon a range of spells from the Lore of Slaanesh: such as “Phantasmagoria” and “Lash of Slaanesh.”

Plus, he can fly, which grants him a looming position from which to control the flow and tempo of the battlefield.

In the ancient city of Zanbaijin, the servants of the Chaos Gods have clashed for millennia. The souls of those who fall in these vicious conflicts are sealed within the Altar of Battle itself, which stands at the heart of The Fallen City. 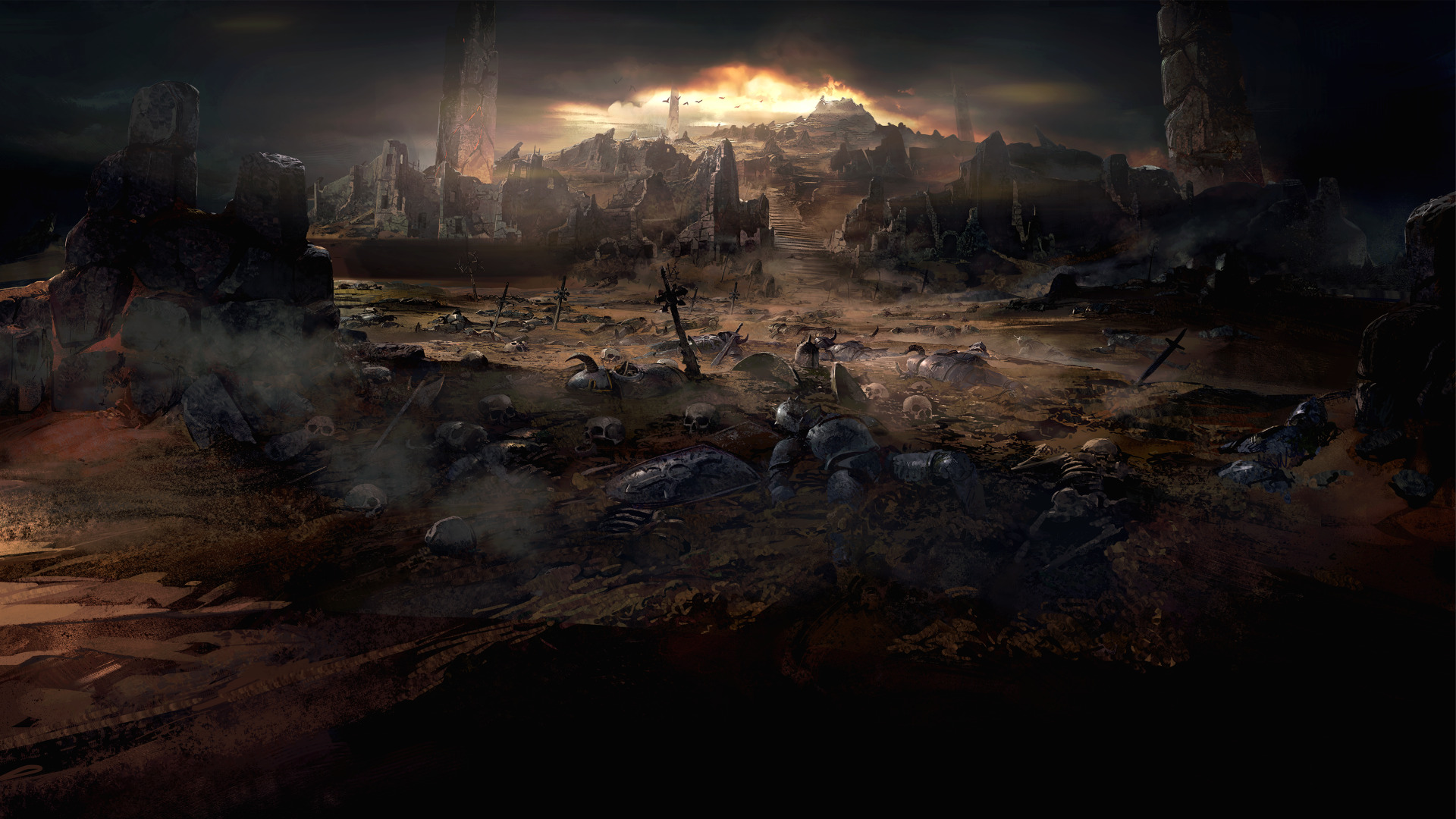 Ursun’s roar has shaken the world and the Altar’s seal has become fragile. The correct ritual will have the power to shatter it completely: leaving the myriad warrior-souls of bygone eras ripe for the claiming.

However, Zanbaijin is not an easy place to reach—even for a Champion of Chaos…

Your Champion must forge their path to Zanbaijin by forcing open the still-healing scars in the world created by Ursun’s roar. Only then will you be able to find the Altar of Battle and claim the souls for your patron god.

Will you take up the mantle of a Champion of Chaos? Then slay your enemies, collect their souls, make your way to the ancient city of Zanbaijin, and perform the ritual. When the Altar of Souls is within your grasp, you will change the balance of power between the Chaos Gods forever! 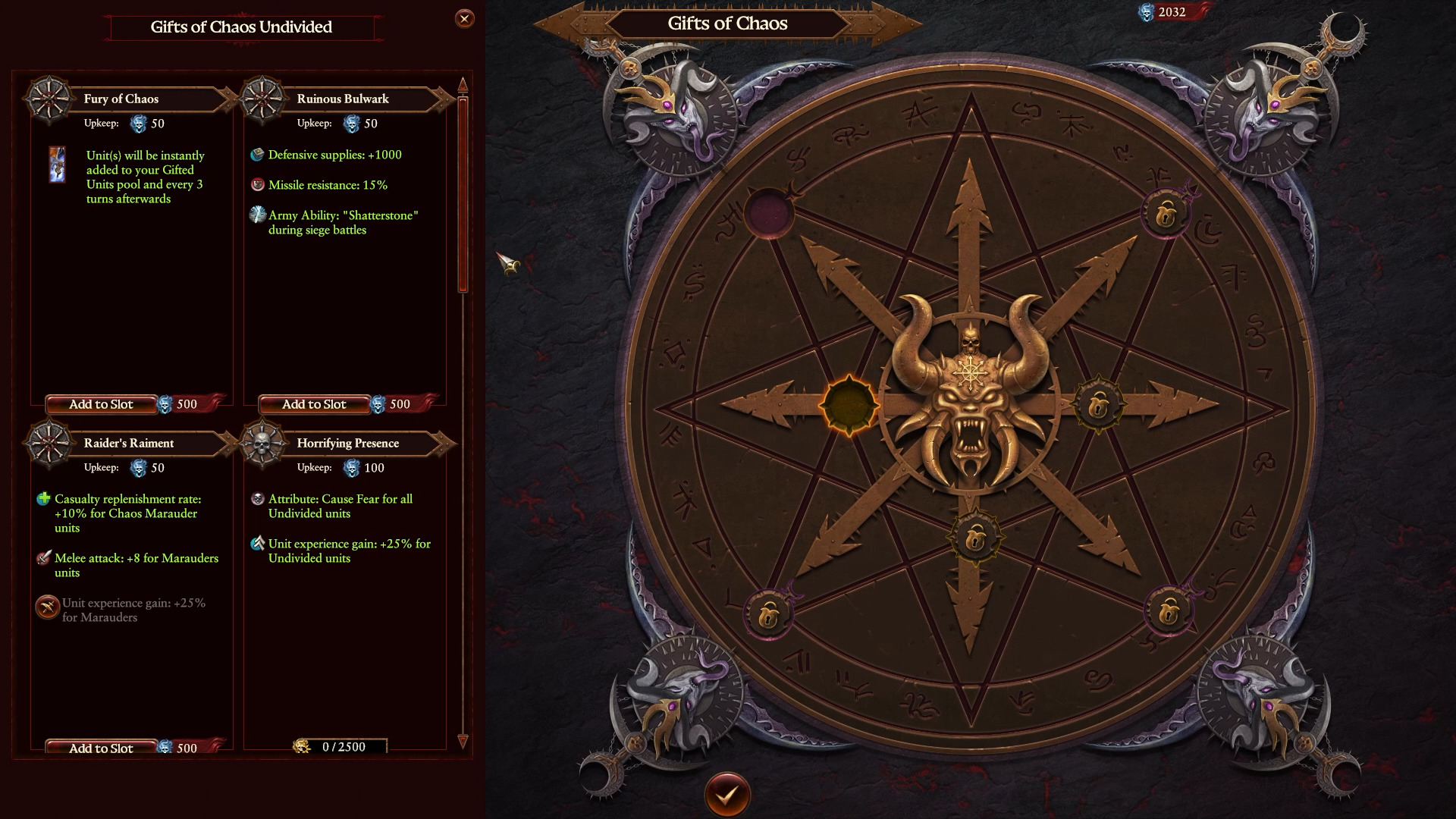 CHAOS GIFTS
Winning battles grants you the Souls of your enemies. These Souls can be exchanged for great power and Daemonic reinforcements as the Champions of Chaos dedicate them to their patron god or to the Undivided union of all four gods. 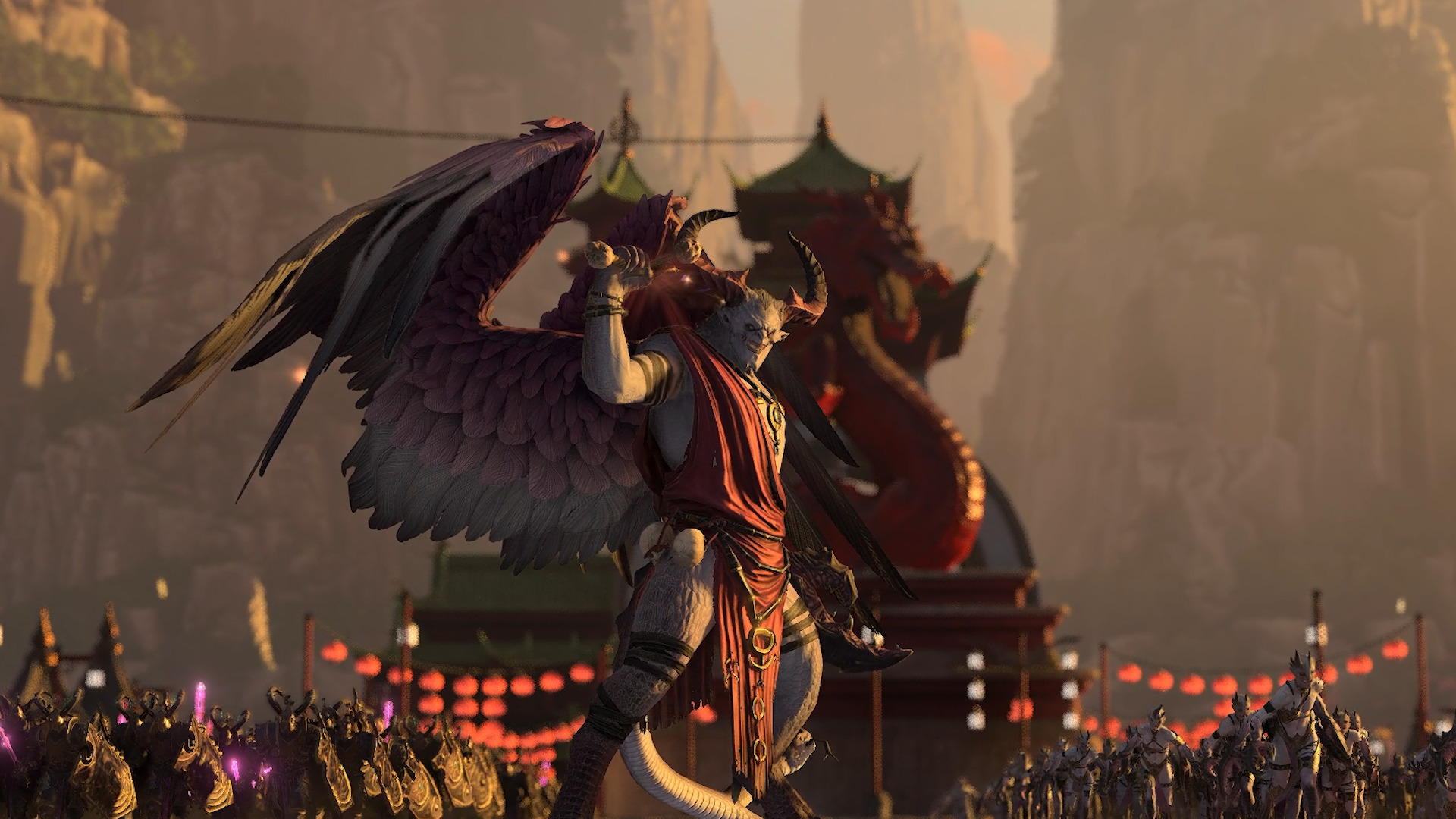 DARK FORTRESSES & VASSALS
Occupying a special Dark Fortress region—most often found in the Chaos Wastes and the Norscan homelands—enables the Champion of Chaos to construct a powerful stronghold. By occupying a Dark Fortress in a Norscan homeland capital, you will gain the respective Norscan faction as an eternal vassal for as long as you control their homeland. 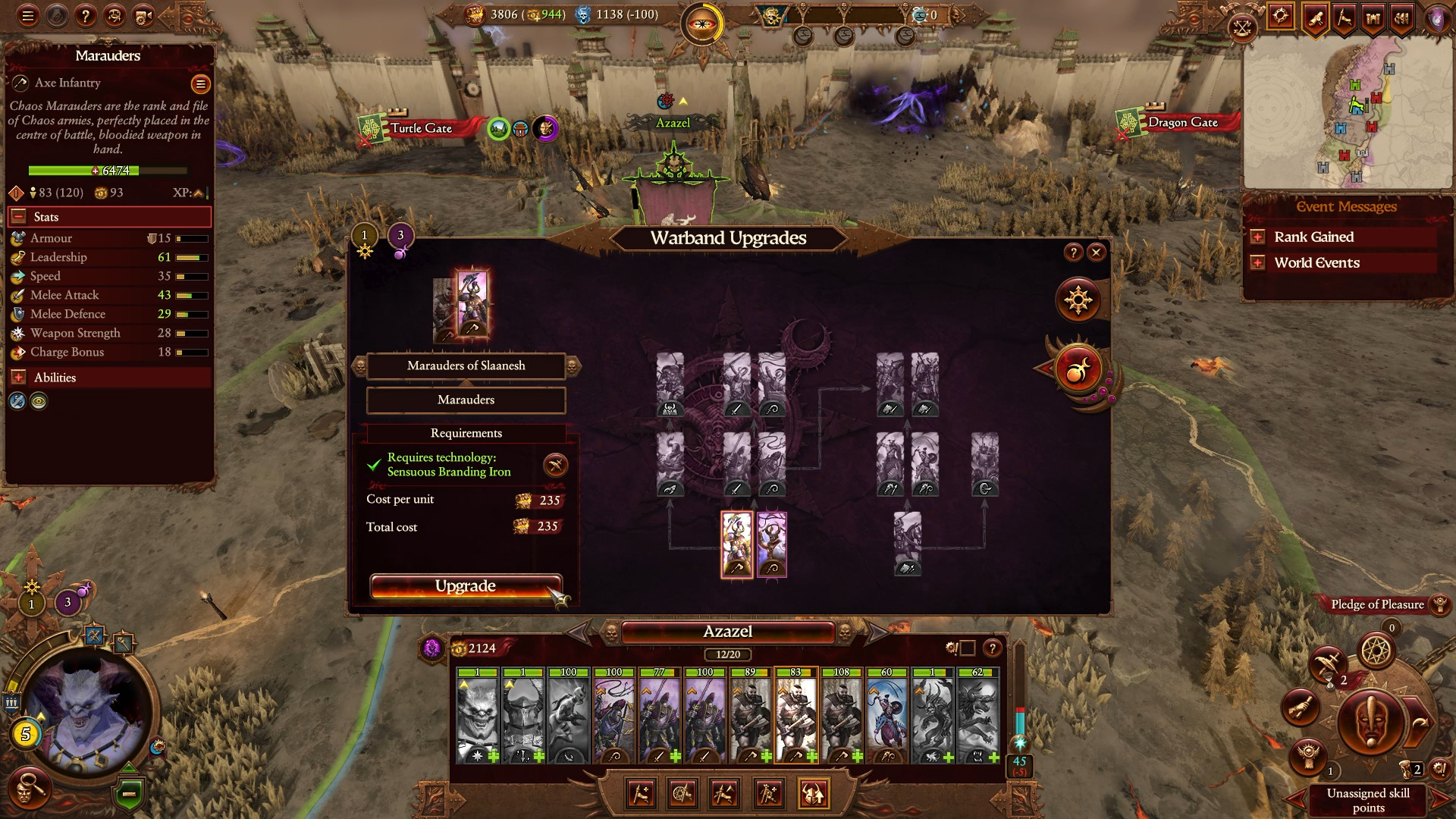 WARBANDS
Champions of Chaos recruit all their forces instantly—either from local provinces or as units granted via Chaos Gifts.

Your mortal units can ascend the ranks of Chaos: rising from humble Chaos Marauders all the way to Chosen or Chaos Knights. You can also dedicate them to a specific Chaos God by granting them the chosen God’s Mark of Chaos. 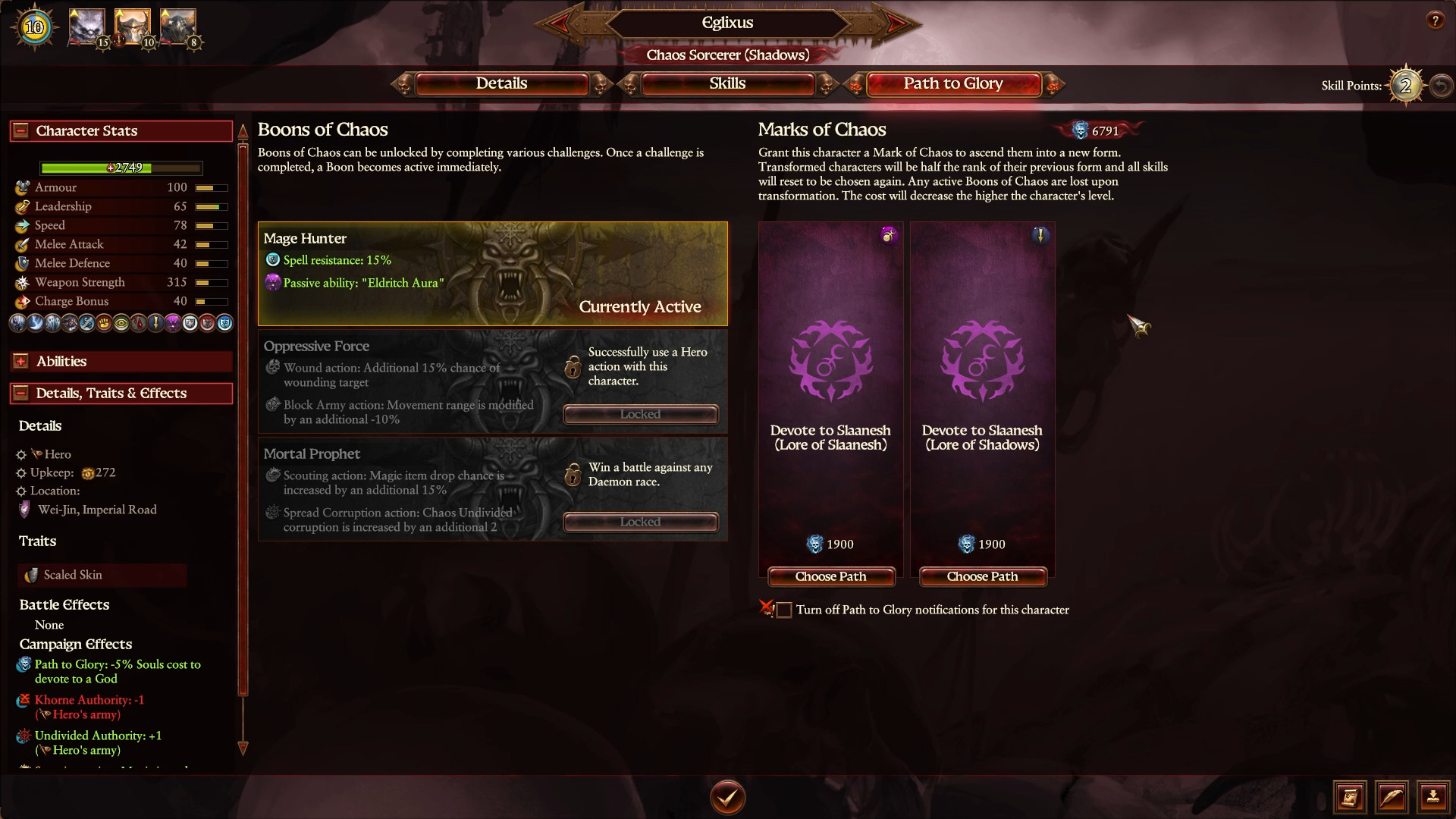 PATH TO GLORY
Champions of Chaos can spend Souls on their Chaos Lords and Chaos Sorcerer Lords in order to promote them to Daemon Princes.

Your Heroes and Lords can also dedicate themselves to one of the four Chaos Gods: Marking themselves and gaining new strengths from their new alignment.

Also coming with the Champions of Chaos Lords Pack is a new unit lineup! These new/unique units will be available to the Warriors of Chaos and relevant Chaos God factions in both the Campaign and custom Battles, while a smaller contingent will also be available to the Daemon Prince during his Campaign.

In custom Battles, the four Champions themselves will join in: fighting alongside the Warriors of Chaos and their patron God’s forces. 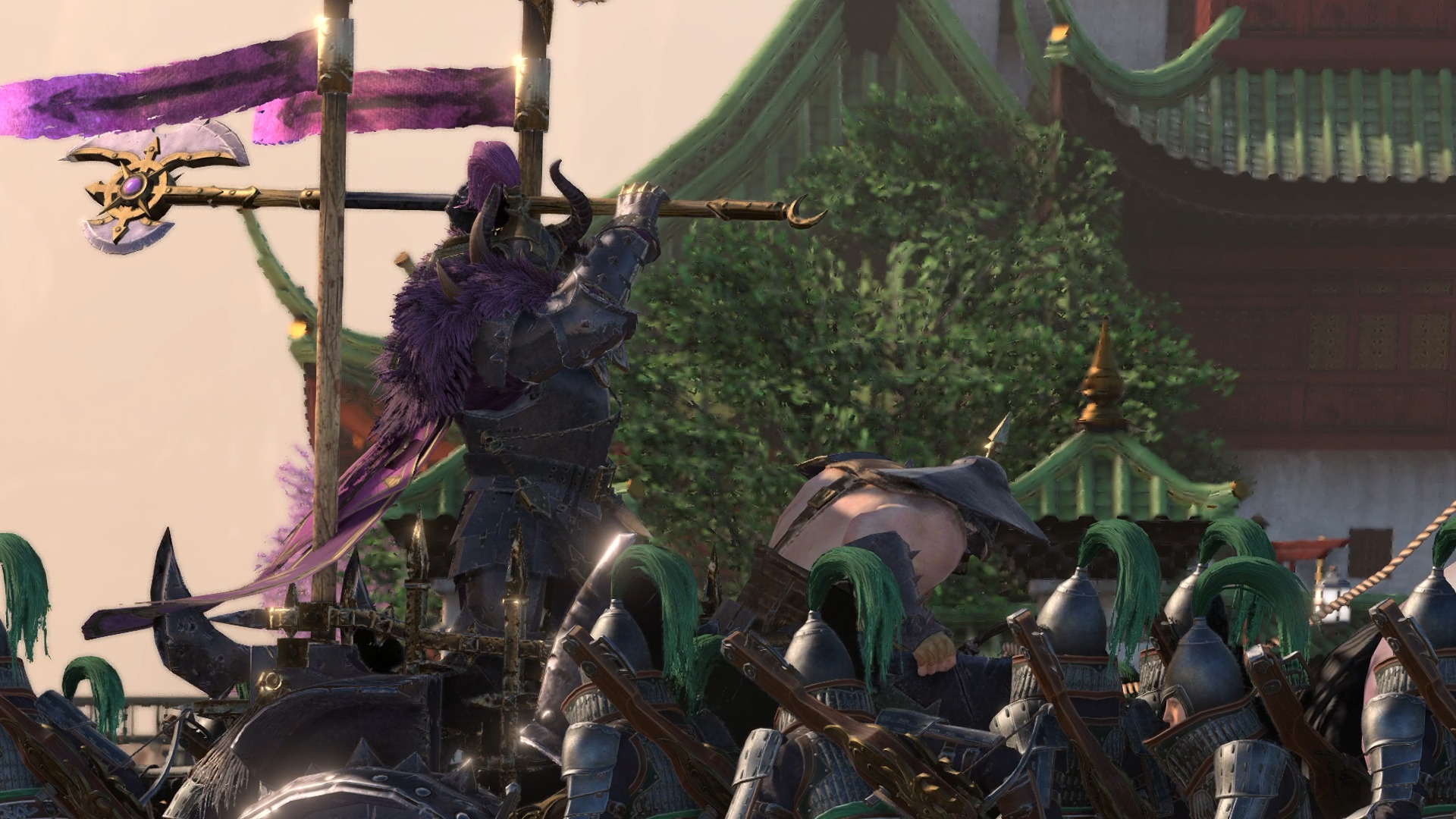 Here is a quick look at the units joining the roster (not including a large number of units already available in WARHAMMER III):

In addition to the above forces, four new Regiments of Renown units will be joining the game: each of which aligns to a different Chaos God.

KNIGHTS OF THE BRAZEN THRONE (Skullcrushers of Khorne)
Alignment: KHORNE
These Skullcrushers are outfitted with jet-black armour and dual axes. They gain bonuses to their combat prowess when charging and are a strong counter to infantry units.

BILIOUS THUNDERGUFF (Chaos Giant)
Alignment: NURGLE
Bilious Thunderguff is a Giant that has been tainted by the gifts of Nurgle. Bilious used to experience extreme bouts of indigestion; now, with his newfound gifts, he is now able to channel his trapped wind and harness it against his opponents.

THE SIBILANT SLAUGHTERCADE (Chaos Chariots)
Alignment: SLAANESH
Those Chaos Charioteers who catch the peripheral gaze of the Dark Prince are offered a place within the Sibilant Slaughtercade. Pulled by Steeds of Slaanesh, these maligned Chaos Chariots have a wealth of additional attributes as they thirst for the souls of their enemies.

THE SEVERED CLAW (Aspiring Champions)
Alignment: TZEENTCH
The Severed Claw is a unit of Aspiring Champions aligned to Tzeentch. These fearsome Warriors are protected by a barrier and armed with magically imbued Halberds, making them formidable hunters of larger targets.

Finally, an Old World Update for the Warriors of Chaos will be free to all owners of the Chaos Warriors Race Pack—originally released alongside Total War: WARHAMMER in 2015. This update significantly overhauls how the race plays: gifting them with the brand-new gameplay mechanics available to the Champions of Chaos, above (Chaos Gifts, Dark Fortresses, Warbands, Path to Glory). 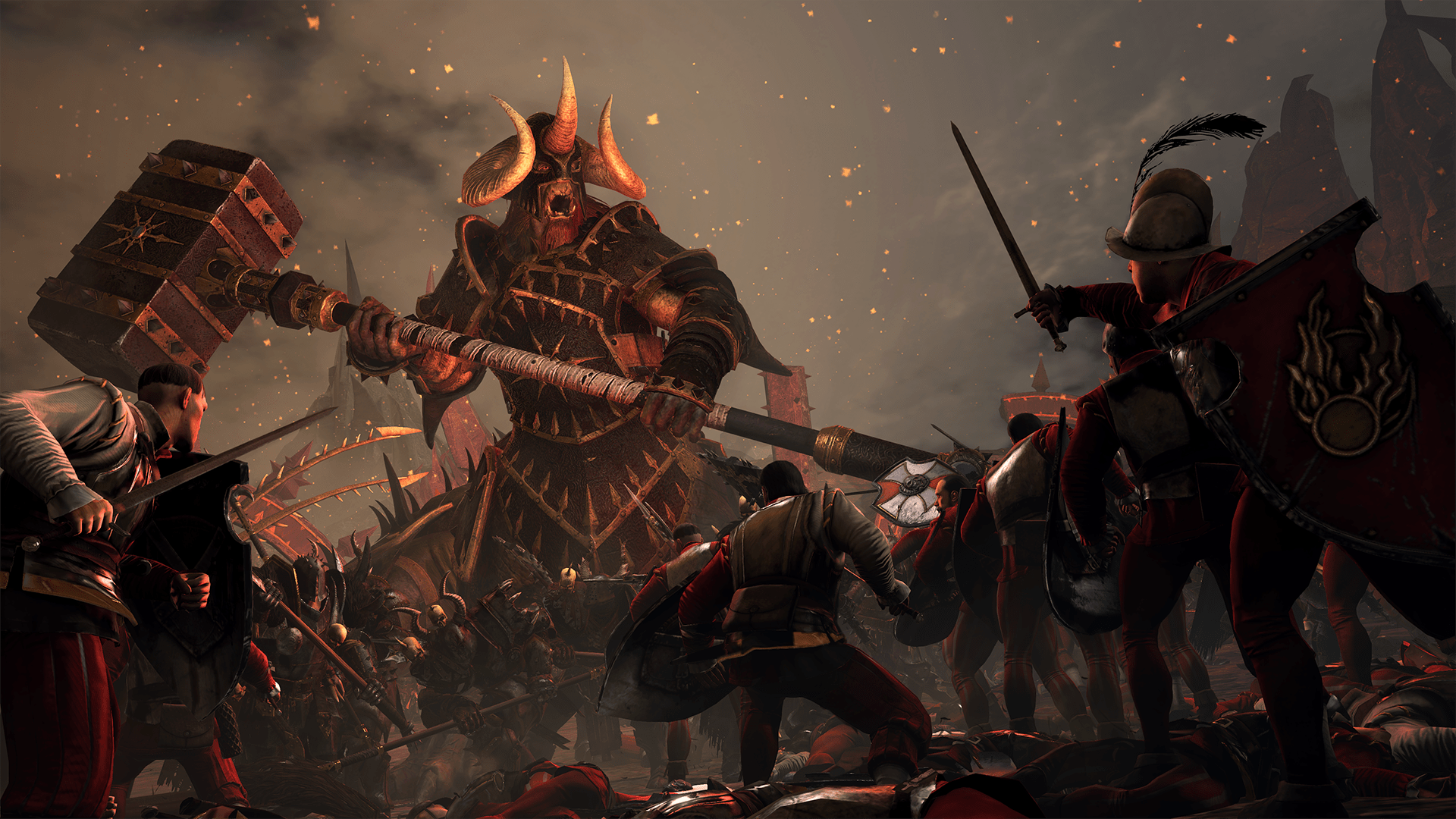 A separate Marked Chaos Warriors (free DLC) will also be available for download, further expanding the ranks of your Northern kin. Those units include three Warriors of Chaos variants:

Watch for all of this when Immortal Empires drops on August 23!

Over the next three weeks, we’ll introduce you to the remaining three Champions joining the Chaos ranks! Look for their reveals alongside their exclusive trailers, in addition to tips and tricks on how to get started with the new Warriors!