Hungry? We’ve got a delicious helping of news for you today. The Silence & The Fury DLC and associated patch will bring a host of free and paid content. In addition to the Beastmen and Dwarf reworks, two new Legendary lords, and new units for the Lizardmen, the Ogres are coming to Total War: WARHAMMER for the very first time in the Ogre Mercenaries pack. Available for free as part of Total War Access (you’re signed up, of course?), it adds a new mechanic accessible by all factions: hirable Ogre units that will fight for your cause so long as you keep them fed, watered, paid, and in combat.

So how does that actually work in game terms? Ogre camps have a chance to spawn whenever an act of destruction takes place – battles, sieges, the razing and sacking of settlements, anything where there might be plunder to be had and meat to be served. Ogres will move into an area and create a camp, which you can then interact with via an army. Here you can choose which tribe to work with and pay, giving units to the local mercenary recruitment pool.

From there, you simply have to actually recruit the units into the army you wish to have them in, and then keep them paid. The Ogre camp will disperse, though more can always spawn later. If you run out of money to pay your Ogres – who are not cheap – then they will depart without a moment’s hesitation.

In Custom Battles, every Ogre unit is available to every faction as part of the campaign-exclusive pool. This means they aren’t available in Quick Battle or custom games with Unit Caps enabled, but otherwise you’re free to bring them to the table whenever you wish.

Big, brutish and extremely violent, Ogres are simple and straightforward creatures; they know what they want and use their brawn to take it. Ogres don’t do contemplative head-scratching, preferring to smash things they don’t understand. The bull-charge forwards is their favoured way to crush any opposition and greedily grab what they like. And what Ogres want is power, respect, wealth and, perhaps most of all, an endless supply of meat to feast upon.

Given the chance, an Ogre will barge into combat, using his great lumbering mass as a weapon. They excel at fighting and this, along with their greed and lack of concern about right or wrong, means that an Ogre mercenary is always ready for a battle against anyone, anywhere. History is replete with examples of Ogres being paid to fight (and even sometimes being paid not to join a fray). When they do enter combat, Ogres make frightening opponents, for they are savage and can sometimes devour the fallen where they lie. In the heat of battle, this horrifies their opponents, who must fight the blood-splattered vanquisher of their former comrades.

Ogre Maneaters are veterans of many campaigns fought in far-off lands. Travelling mercenaries beyond peer, they have spent decades accruing scars, tall tales, wealth, and exotic wargear. Maneaters have fought throughout the Old World and beyond, and many races attempt to recruit such fighters into their armies, promising food, gold, or whatever else the Ogres want in return for their services. It is the pay that matters, not the foe, although with some contracts Maneaters are awarded fallen enemies to eat, so in those cases the enemy may matter. Ogres eat anything, but they have preferences.

Maneaters tend to operate in small groups, some of which have fought together for years. Despite their outlandish appearance, these tight-knit bands excel at breaking heads. It’s rare for any two Maneaters to fight or be equipped in exactly the same manner, and opponents find themselves facing a dizzying array of different weapons and combat techniques. The only real factors uniting the individualistic Maneaters are a monumentally inflated sense of self-worth and the capacity to smash aside lesser creatures without breaking a sweat.

Powered by thick haunches of purest muscle, a Mournfang surges towards the foe at a speed faster than their muscle­-bulked frames would suggest, not slowed in the least by the large Ogre or saddle atop its hairy back. Protected by thick skin and coarse shaggy hair, enemy arrows bounce off the oncoming beast or ping off the Ogre’s armour, as harmless as hailstones. When they do smash into an enemy, the powerful Mournfangs chomp, slash and stamp the foe whilst the Ogres lay about them, swinging ponderous clubs to bludgeon them.

There is a fortune to be made as a mercenary for a young Ogre with his own Mournfang, and every spring a few stout lads from the upper slopes will join together and sell their services as some of the heaviest shock cavalry in the known world. Although whole units of Mournfang Cavalry can usually secure the victory of any battle they are engaged in, these brutes and their gigantic steeds do not come cheap. The Tyrants or paymasters of the victorious side often note a profound feeling of loss when the spoils of war are shared out.

Can truly any force stand against the gluttonous might of the Ogres? We certainly can’t, and as part of the Silence & Fury update on July 14th you can find out how your enemies/friends/yourself holds up – naturally, the AI is just as capable of fielding these units as you are.

And what better possible way is there to bid farewell to the New World and WARHAMMER II than with brutal warriors adventuring far from their home in the north-eastern reaches, far beyond the realms of the Empire and Kislev, near the mysterious lands of Cathay? This taster, a mere morsel of what might lie in their Kingdom, is available through Total War Access, along with a host of other content for WARHAMMER II.

Yes, the Ogre Mercenaries are our final major addition to WARHAMMER II, alongside all the other content in The Silence & The Fury, and bug fixes and balance patches notwithstanding. Feast with them, drink with them, pay them well, and maybe they will spin you a tale – one of the mysterious East, of new realms of conquest, of Daemon armies clashing, headed by terrible creatures. Of the Maw, and its insatiable hunger, and the legends that tell of a way to finally sate it…

Here’s to the future. 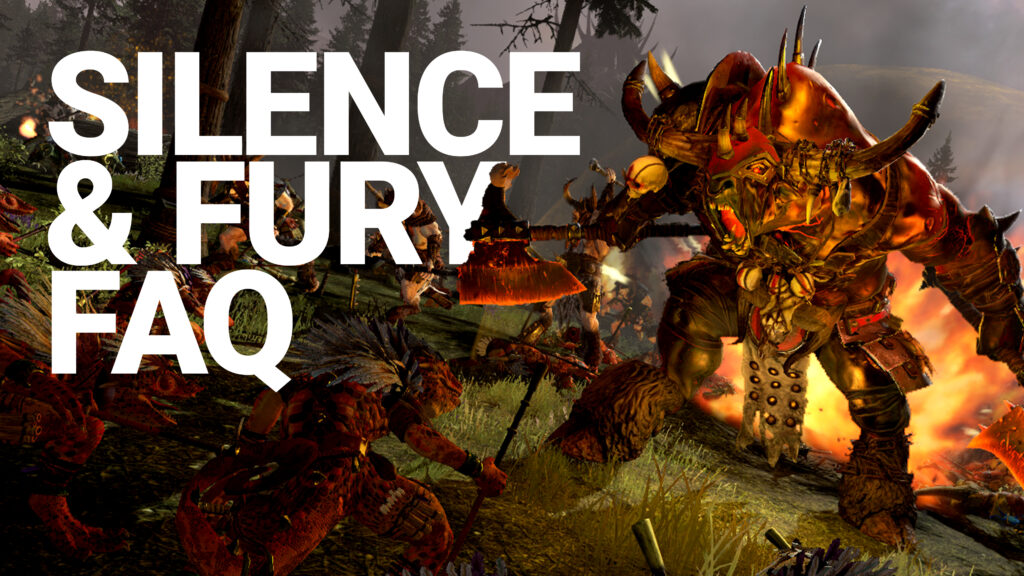 The Silence & The Fury is the next, final, and be(a)st Legendar...