Home › Blog › The Jabberslythe rises: say hello to the most terrifying new monster for The Silence & The Fury

The worldwide rankings for ‘things you don’t want to meet in a dark alley’ are about to need a major update. The Jabberslythe is the sort of slavering, insane beast that only occurs when particularly nasty Chaos powers get their hands dirty in the non-human corners of the world. Claws, wings, tongue, wild eyes, poison skin, the Jabberslythe has it all, and it’s the latest Beastmen unit introduced in The Silence & The Fury.

The key to the Jabberslythe is that it is an absolute unstoppable beast at doing the thing it does well. Match it up against a carnosaur or a dragon and it’s not going to have the greatest of times – fire-breathing mountain creatures and ancient beasts are not its natural prey. However, against a line of infantry, no matter their armament, it will be a slaughter.

The Jabberslythe’s main tools beside its host of naturally occurring spiky bits are auras. Every moment spent in combat it is spitting acid blood and vomiting wretched toxins over its foes. Every second looking upon it is an invitation to madness for all but the hardiest of minds. It is definitively and without a doubt not a friend.

The Aura of Madness and Spurting Bile-blood, as they’re so lovingly called, are its dangerous capabilities. In game terms, this comes down to constant poison and damage in combat, and additional damage to anything close that has low leadership. Even the most famed of monster killers are probably going to have problems if they operate as a pack rather than one extremely powerful unit.

Ben Leech, designer on the Silence & Fury team, gives us a rundown. “It’s got a long proboscis tongue, it’s got acid for blood, it’s an amalgamation of many different things slapped together and wrapped up in a horror theming.

“You want it to be attacking infantry, just because it can do so much damage in that aura. You can’t really blob it and send all your infantry in to surround it because they’ll all take damage, they’ll all be weaker because of it.”

The Regiment of Renown variant, the Vorbergland Broodmother, is yet another step above, her boiling blood giving her aura armour-sundering properties rather than poison. “Much better against Black Orcs, Chosen, anything that’s wearing a plate suit.” As the end result of the question ‘can a Jabberslythe breed?’ she is not for the faint of heart and more than most can handle.

Between this, Taurox’s penchant for minotaurs, and the brand new Ghorgon, you can build a truly ferocious and specific army of destruction, rampaging through enemy territory and forces.

In its own way, the Jabberslythe is beautiful. In motion it is a whirlwind of competing predators that happen to be in the same body, all vying to be the bit of the creature that gets the kill. Ben recalls trying to get all that exactly right with Eva Seyeux, the animator who worked on the Jabberslythe.*

“Getting the weight of it was something that we kind of needed to do. Eva and I worked on this quite closely. I pulled all these references together; we were looking at frogs and lizards and dinosaurs and all sorts of stuff to see how it all matches together. The Jabberslythe has little insectoid legs underneath it, these big muscular forearms – trying to get that to move in a way that was interesting was cool.

“We opted to make it not fly because the wings are so tattered, it’s really messed up. But we still made it hover a bit, as it tries to take off. Its charge animation is the best, it flies up in the sky and then crash lands into whatever it was going for.”

Vick Gaza, Senior Creature Artist, also had some thoughts on putting together this rather magnificent beast.

“The Jabberslythe was the most challenging and complex creature I have done at Creative Assembly – by far. Knowing that it is a fan-favourite put in extra pressure for me to deliver an amazing piece.

“We had to find a perfect balance between keeping faithful to the original Games Workshop design and player expectations but also making sure it reads well in the context of a Total War game from up close and far away. This is incredibly difficult and requires constant communication.

“I worked closely with Baj Singh – our Art Director – until we found a sweet spot that ticked all the above requirements. It was a mix of creative instinct, pulling from the lore, communication, and iteration. Games Workshop gave us feedback early on as well.

“I also knew that I had to make the shapes and topology of the Jabberslythe as animation friendly as I could so that Eva could really make this creature come to life. I worked closely with Eva from the very beginning stages of this model all the way through to the end and made sure to accentuate certain shapes that she would need for her animations to read well.

“The front arms and the wings are both fairly non-conventional so I asked for a lot of feedback from Eva on how she would like them to move and feel. This helped me foresee and resolve the initial modelling challenges and distribute the ‘weight’ efficiently in my modelling phase so that it would transfer well for her animation purposes.”

Matthew Lewis, Lead Animator, oversaw the work on the Jabberslythe. Here’s his perspective on getting this thing to move.

“From an animation perspective, the Jabberslythe posed many challenges. It had to look realistic but obviously, there was no real-life footage to use as reference. Eva drew on a wide variety of sources, her in-depth knowledge of animal locomotion, and her abundant imagination in order to create a convincing performance for the Jabbeslythe.

“As part of this process, we decided that the creature should look ungainly. It shouldn’t move with agility and precision. It should shamble and lurch, not fully in control of itself. Not a creature of grace but an affront to nature. Eva had to make this ungainliness appear terrifying rather than comedic. A difficult balance to get right but one that I think she accomplished.

“Charlemagnes well spent. Also, I don’t want to spoil the surprise, but we did something new for the Jabberslythe’s matched combat…”

We’ll let you discover that one for yourselves. The important thing to remember is making content for Warhammer is always a team effort – Ben, Matthew, Vick, and Eva also had the help of dozens of QA, other artists, community staff, and even one blog post writer. Here’s Vick with the roundup:

“Big creatures like these are always a team effort and you must simultaneously follow your own artistic sense as a creature artist while relying heavily on others’ expertise in their own fields to really bring the best out.

“I hope players will love and have fun playing with this unit as much as we enjoyed creating it!”

We really do hope that it lives up to your grossest expectations. Remember, all this and much, much more in the Silence & Fury update coming July 14th.

*Eva has since left Creative Assembly for pastures new at Guerrilla Games. We wish her all the robotic-dinosaur-best!

Home › Blog › The Jabberslythe rises: say hello to the most terrifying new monster for The Silence & The Fury 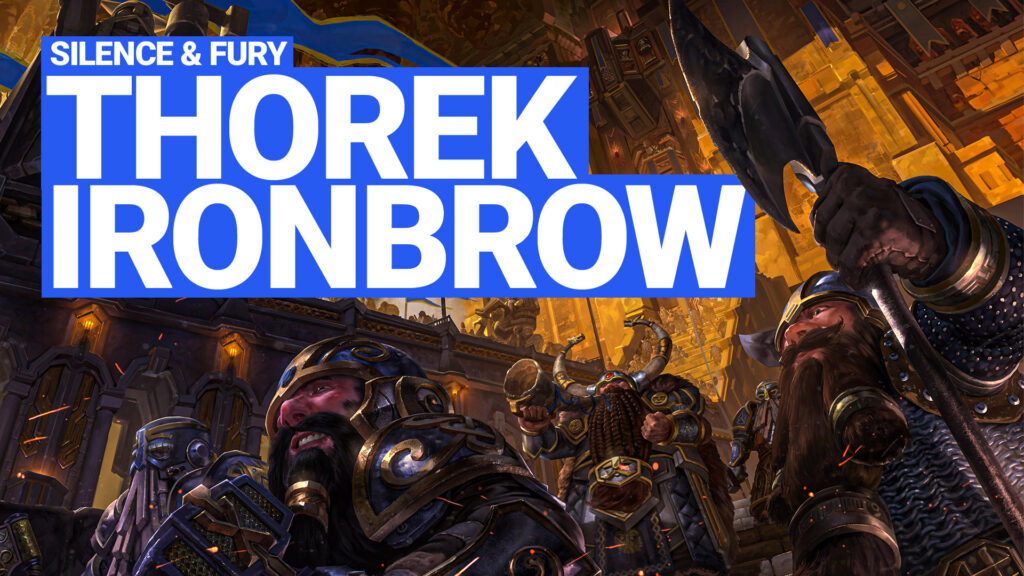