Home › Blog › THREE KINGDOMS Past, Present, and Future: The History Behind Mandate of Heaven

With the release of Mandate of Heaven, the next Chapter Pack for Total War: THREE KINGDOMS, on the horizon, it’s time to take a look at the rich history behind this time period.

We sat down with senior designer Simon Mann to chat about Mandate of Heaven’s story, characters, and the future of the world of Total War: THREE KINGDOMS. 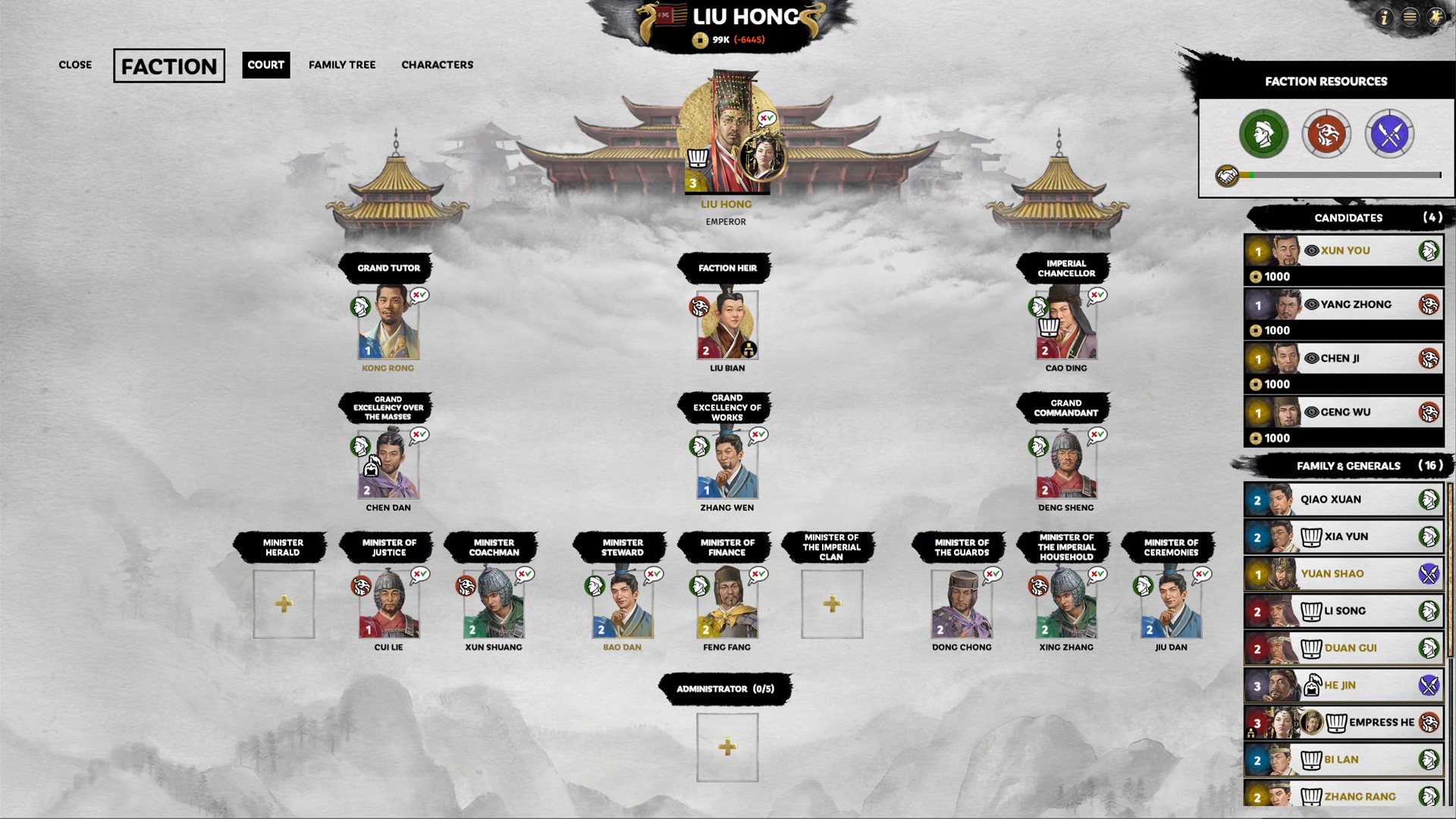 So what is the story of Mandate of Heaven, and why tell it?

Centre stage is the Mandate War between the Empire, led by Liu Hong, and the Yellow Turbans, led by the Zhang brothers. It is up to you, the player, to manage to ailing Han empire and save it from its historical fate.

“One thing we’d always been very keen to do was to go back to the very beginning, a prologue if you will. We felt that the Rebellion in 184 was a great place to tell the origin stories of our main protagonists (Liu Bei, Cao Cao, Sun Jian), and also to explain how Dong Zhuo became the tyrant.”

Mandate of Heaven also introduces a number of new characters.

“One other notable character is Liu Chong, rarely mentioned in either books or popular culture. He was a relative of the Emperor and famous for turning Chen province into a safe haven for all. He was a chivalrous warrior and skilled with a crossbow, going so far as to write a book on the subject.”

There’s also the Zhang brothers (Zhang Jue, Zhang Bao, Zhang Liang), who represent the primary antagonists in this tale – as Simon warns: “They’re leading a rebellion to destroy everything the Han factions hold dear and if, they succeed, it’s game over.” 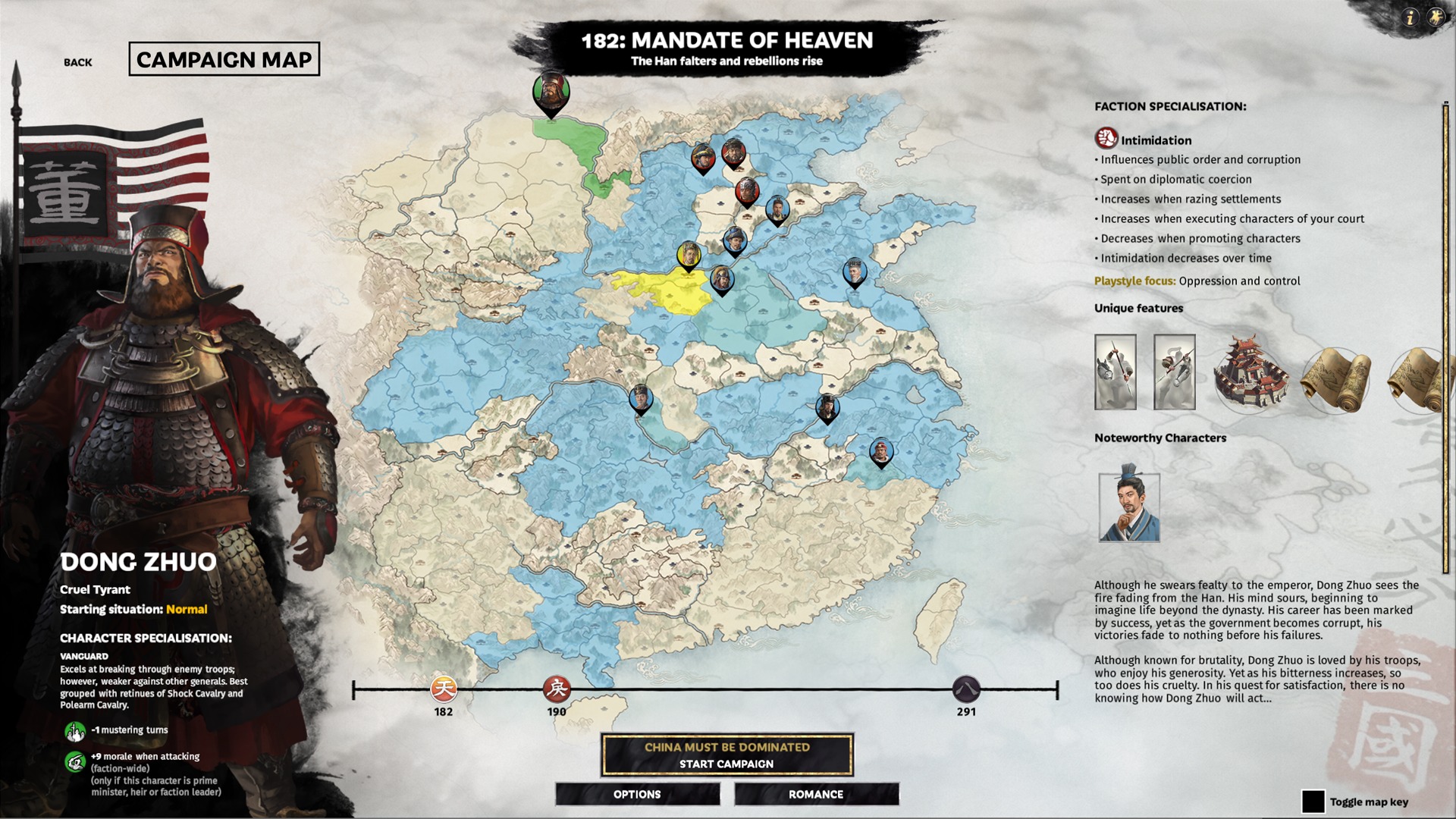 Mandate of Heaven will see many familiar faces – but not as you may be used to seeing them.

“We’ve tried to build the origin stories of each of our characters to give a more fleshed out narrative to why they’re important to the story,” Simon explains. “Liu Bei starts as a simple peasant selling sandals. Cao Cao has no lands of his own but seeks recognition. Dong Zhuo rules over a large number of lands but is beset by rebels from all sides. We’ve also added a number of new historical events for the period which will help to enrich the story of the characters.”

And how do the Yellow Turbans in this Chapter Pack compare with those from the early adopter DLC?

“While many familiar characters will appear, these are the Zhang Brothers, the original Yellow Turbans. They have completely bespoke faction mechanics, technologies, and unit rosters. Their units are focused on decimating Han empire units, and their mechanics spread rebellions to neighbouring regions.”

There is still much to come for Total War: THREE KINGDOMS, as Simon elaborates:

“We still have a lot of great ideas for content to fill the world up. As we’ve recently teased, there will be some barbarian themed content coming up in the near future. We also want to continue fleshing out the characters and mechanics in the game, revisiting content both old and new.”

Who will take the reins of power?

The year is 182CE. The Han Empire is in turmoil, and China is slipping towards chaos. The Emperor’s court is paralysed by corruption, and a great famine has ravaged the north. In the eyes of the people, Emperor Ling has lost the Mandate of Heaven – and with it, the right to rule…

Home › Blog › THREE KINGDOMS Past, Present, and Future: The History Behind Mandate of Heaven

“I think THREE KINGDOMS had over half a million words in it by the end”: writing Total War

The product of writing can be seen everywhere in Total War games, f...