Clothes are pretty important – after all, everyone wears them.

Clothing is arguably even important to video game characters, with it having to convey a great deal about them at a single glance – and the characters of Total War: THREE KINGDOMS are no exception.

We took some time to chat with Teodora Petkova and Beth Hobbs – associate and senior concept artists respectively working on the THREE KINGDOMS DLC team – about their approach to designing costumes and armour, the importance of realism versus aesthetics, and which of their distinctive designs they wish they would bring to life if they could. 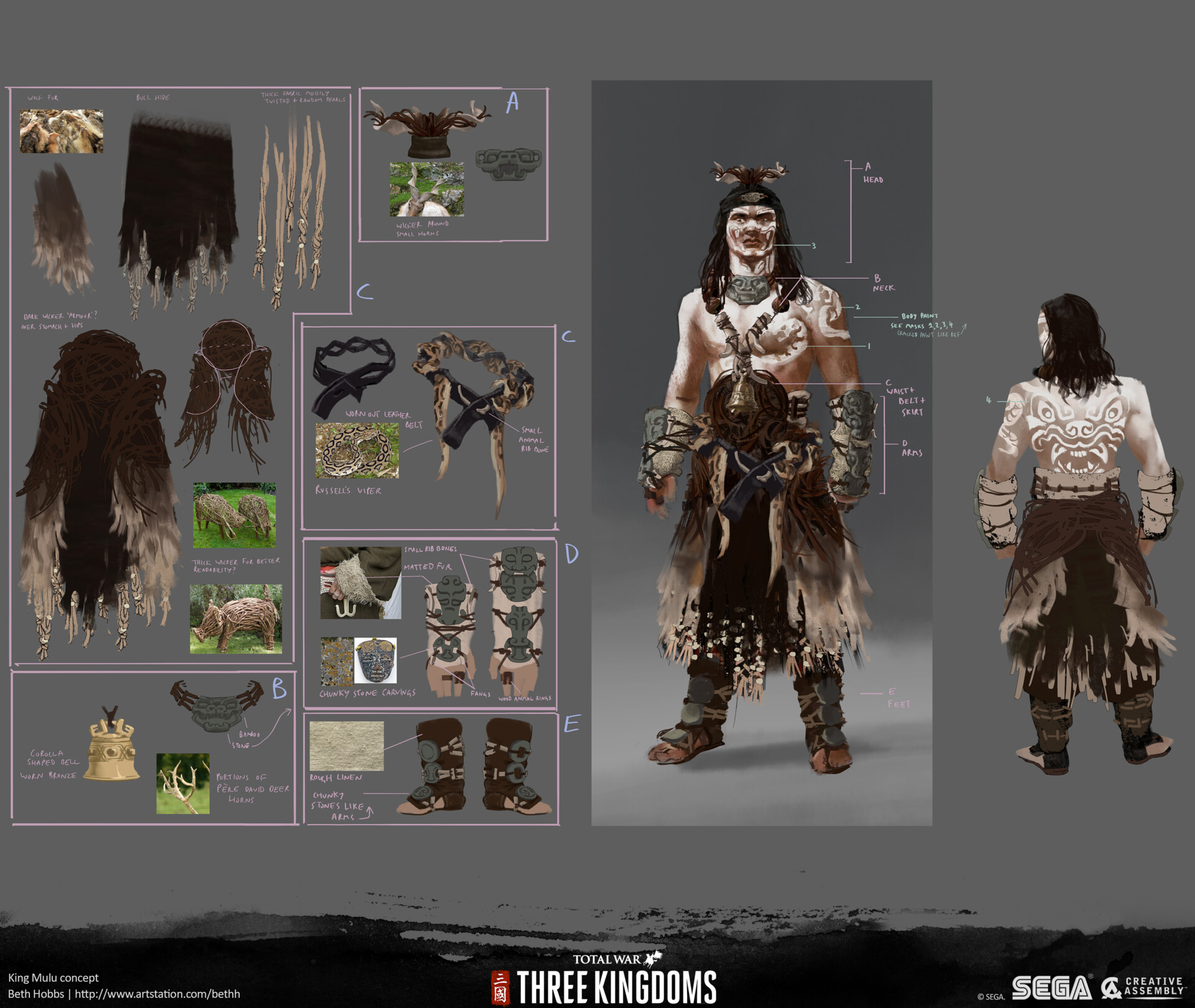 So where does the process of designing a THREE KINGDOMS character’s costume begin? The same as many things do at Creative Assembly: with a brief.

Teodora (or Teo for short) explains: “It’s essential to have as much information about their history and personality as possible in order to convey those elements of the character in the most efficient way possible through the visual language utilised in the clothing, the props they have on them, the weapons, etc. So, we get that brief, we do a bit of our own research and reference gathering, and we get started! When information about a character is scarce – which is not rare for Three Kingdoms – sometimes we need to sprinkle in a bit of flavour from our own imagination in order to make it work or to simply get some new ideas.”

Beth highlights the collaborative nature of the initial parts of the design process, saying that first of all she likes to chat to the designers about “the personality vibe we’re going for with that particular character” as well as their assigned element. This is then followed by reading up on the history of that character, seeing whether they’re described in the Romance of the Three Kingdoms novel, and checking out other depictions of them in games and movies.

“By now,” Beth says, “I’m forming a vague idea in my head, so I start gathering material and design references onto a mood board. Finally, the drawing begins and I start messily sketching thumbnails.” 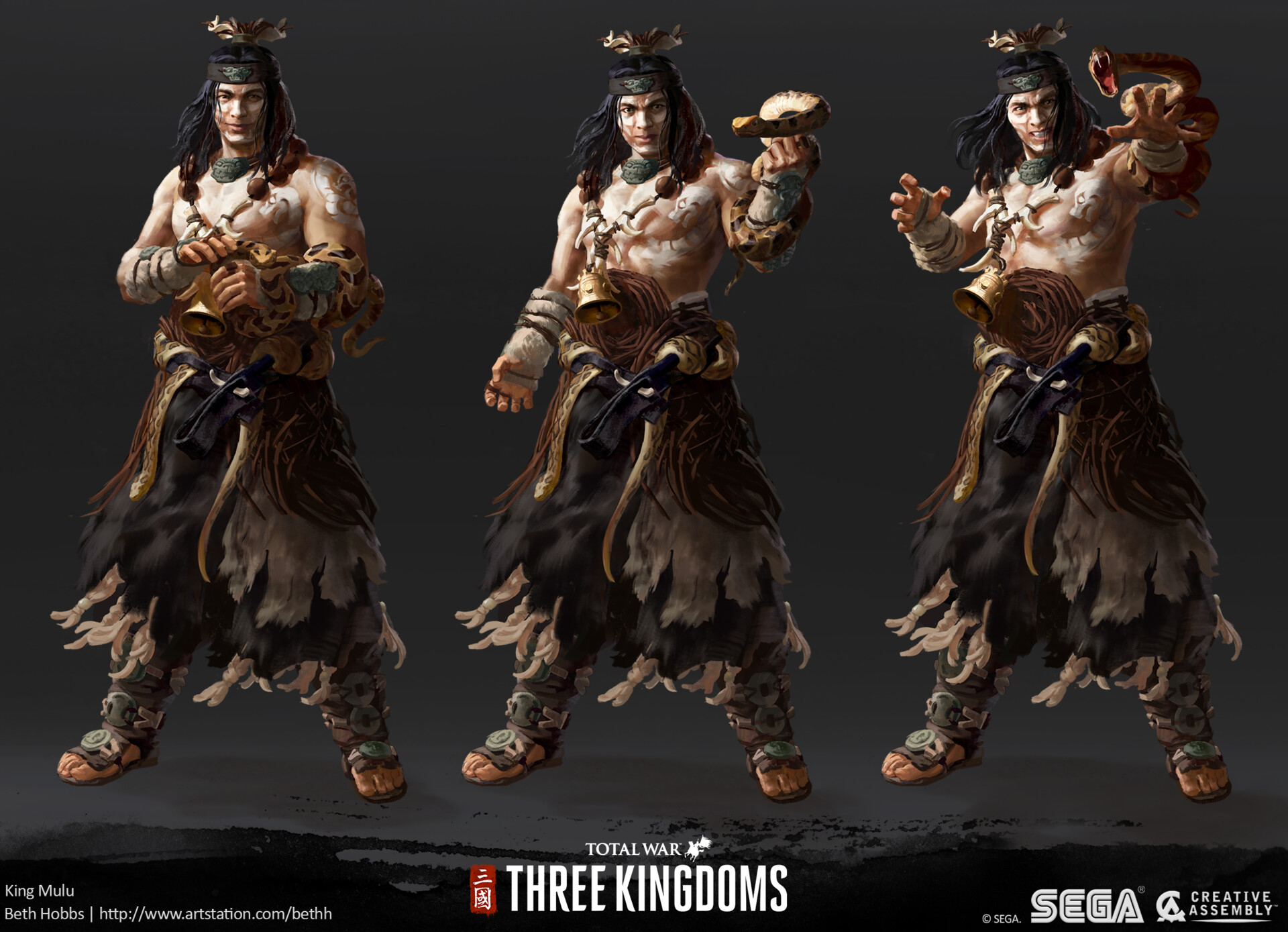 Unsurprisingly, both Teo and Beth agree that research is a key component of the design process when it comes to creating costumes for a historically focused game. But what does the research process look like?

According to Teo: “When it comes to the costume of a character, it usually boils down to using whatever descriptions are available in the Romance of the Three Kingdoms novel and afterwards scouring the internet for any additional historical information that would be useful for getting a good idea about the character’s personality and role. Afterwards, we reference any other relevant depictions in Chinese media of that character so we’re aware how they’ve been represented in the past and how the audience might possibly perceive them.”

Beth takes a similar approach, adding: “For me it’s lots of skipping through movies and TV shows looking for titbits of outfits I like the look of as well as trawling through online images. Having worked on THREE KINGDOMS characters for so long I’ve developed a sizable mental library of Chinese outfits and armour, so I’m mostly searching for inspiration for the signature design element and/or gimmick of the character design. I then build around that.” 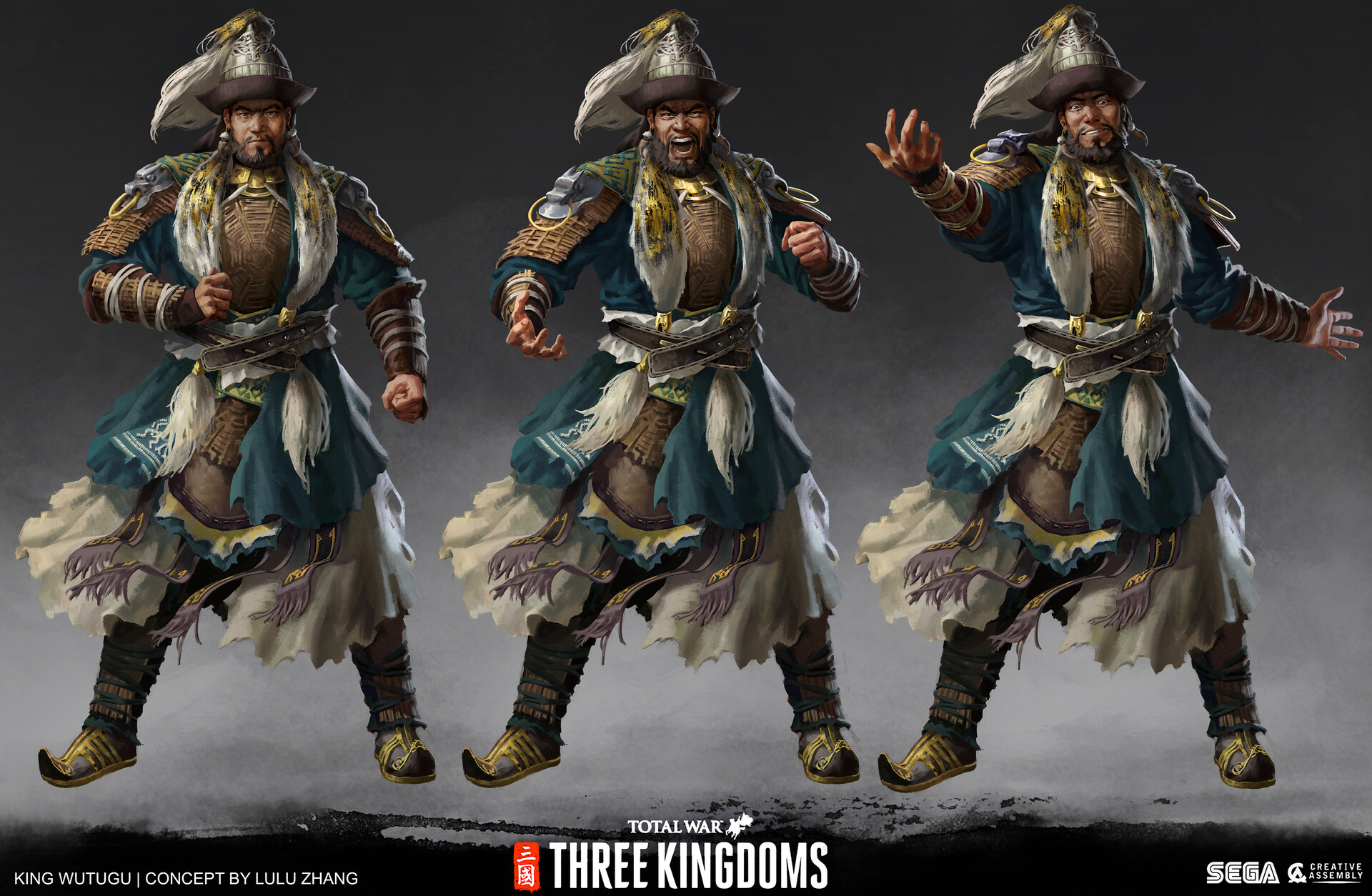 Teo also signposts the extra care that goes into learning about costumes from a time and place as far back and far away as the Three Kingdoms era: “When it comes to researching costumes of whole different cultures, we turn to any available historical books, online research papers, archaeological museum exhibitions and findings in order to get an idea of the aesthetics of said culture, their traditions, and their crafts, all of which inform the defining visual characteristics in the costumes.”

And what about the ever-present issue of realism when it comes to a game like THREE KINGDOMS?

Teo states: “In a mostly realistic historical game like Total War: THREE KINGDOMS, we do try to stick to realism as much as we can. However, precisely due to technical limitations or lack of historical information, sometimes we have to take liberties with some of the choices we make.”

By way of example she points out the short sleeves in all the costumes featured in THREE KINGDOMS: “Historically, tunic sleeves during this period were very long and flowy, but due to skinning and animation limitations we can’t have sleeves like that, so in the game they are all significantly shorter.”

Beth agrees regarding the team’s efforts to this end: “The game has an aesthetically romantic approach to the time period so we don’t have hyper realistic character designs. However, we do want them to be grounded, believable, interesting, and unique… I hope we’ve found that balance!” 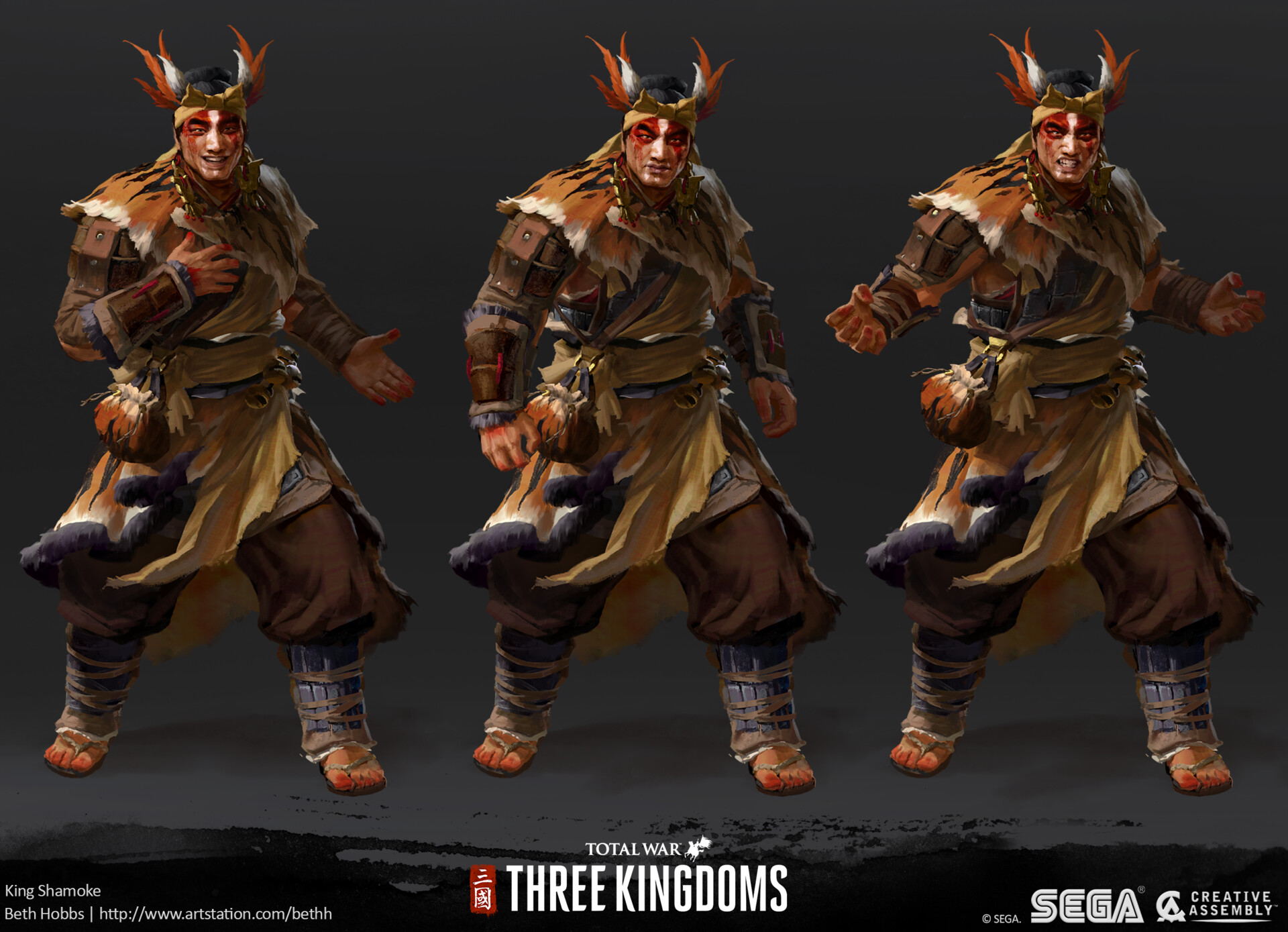 As you might expect, designing costumes for video games definitely has its own unique challenges, as Teo explains:

“For video games, especially Total War ones, there are many technical limitations we have to keep in mind. It usually boils down to the skinning and animating process – there is a specific way all characters are skinned and animated, so we need to be thinking about what animation bones are available to skin costume parts to, how certain parts will deform when the characters move and fight, whether the characters be on horseback, and so on… So, because of these animation and skinning limitations, we can’t have parts that are too long, flowy, that might obstruct motion in some way, or would clip with body parts of the character when they move. We also can’t rely on fabrics being accurately simulated in real time as the game engine doesn’t allow for such a resource-heavy process when hundreds of units can be present on screen at the same time. As a result, fabric pieces are always attached to bones and manually animated, hence why our freedom is limited in that regard.”

There are also other factors specific to Total War games to bear in mind when designing the look of characters in THREE KINGDOMS, as Beth elaborates: “Readability at a distance is important in Total War, so it gets you thinking in big shapes and values when it comes to design. We also want the character to be unique and recognisable among a sea of other heroes as there’s quite a few unique characters now!”

“Armour is very fun to design, but it can be tricky!” Teo explains. “Of course, common things we have to keep in mind are the mobility of the character (for example that armour pieces wouldn’t limit their mobility, wouldn’t stretch during animations, and would allow for almost unlimited freedom of movement), visual weight and balance, and how the various parts of the armour would connect to each other in a logical way while also staying true to the historical aspect of it – how armour was made in ancient China, what techniques and materials were used, and what the common elements present in the sets of armour soldiers of different ranks were.”

Beth echoes that “technical limitations are usually the biggest hurdle – things like animation, rigging, deformation. Because of this, we’re limited on things like armour length and width, item locations on belts, etc. This goes for all character designs and includes fabrics too – not just armour.” 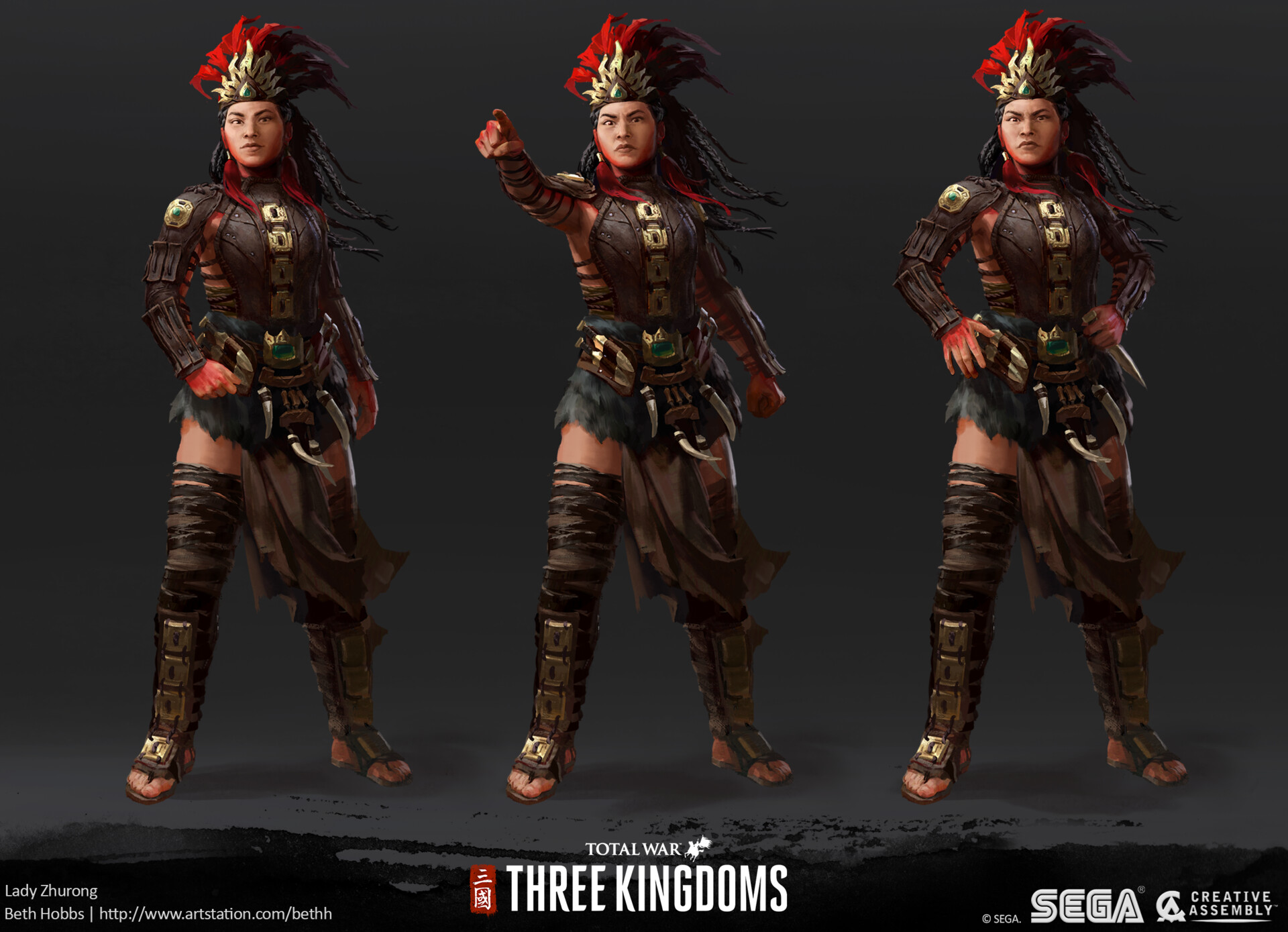 Now it’s time for perhaps the most important question: what are the artists’ favourite costumes in THREE KINGDOMS and why?

Teo is a huge fan of King Mulu’s and Lady Zhurong’s costumes from The Furious Wild DLC: “I have a weakness for that aesthetic!” Beth, meanwhile, is a devotee of Jia Xu, who was designed by Lulu Zhang: “I really like his iconic sweeping hat and how this shape is echoed in his shoes, as well as the small things like the decoration on his chest that looks like three eyes. He’s both understated and easily recognisable – goes to show how good a designer Lulu is!”

Although neither of the two have experience of bringing any of their creations to life as of yet (aside from Beth having made herself “endless suits of cardboard box armour as a kid”), when prompted Beth said she’d quite like to have Yan Baihu’s costume for herself: “I dig the bandit look.” 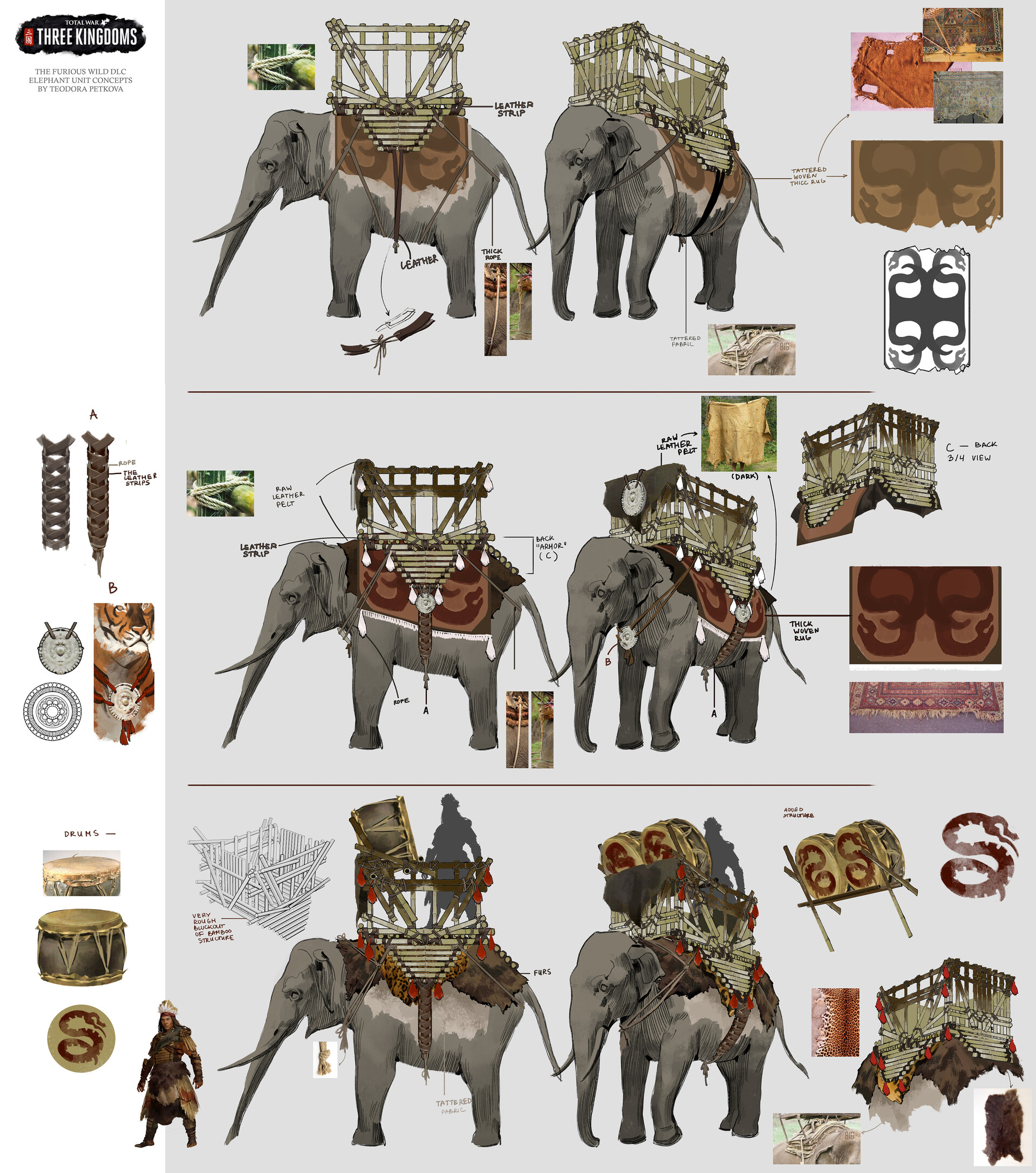 But what tips would Teo and Beth give to those who want to follow in their footsteps?

Teo advises: “The primary purpose of any character costume design is to communicate the essence of this character, their story, their purpose. Think of the character-to-character relationships within the narrative of the game and the character-to-environment relationship and how they can be communicated visually though the costume. The most important thing is that the character feels real, that you can intuit what type of person they are through their appearance, and that you can connect with them – the only real way we experience the world and works of art like video games is through that connection. And then don’t forget about the technical limitations, mostly to make the lives of your fellow team members a lot easier!”

Beth’s top tip is short but sweet: “Try to reflect the character’s personality and story with their outfit – but also don’t overdesign! Easier said than done… It’s what I’m attempting to do anyways, haha.”

Don’t be too clothes minded…

Make sure to stay tuned for more behind-the-scenes peeks at the design and development of our historical Total War titles in the coming weeks, and check out our blog backlog if you want to read more right now.

Lastly, keep an eye on the Total War social media channels for all the latest updates!

“I think THREE KINGDOMS had over half a million words in it by the end”: writing Total War

The product of writing can be seen everywhere in Total War games, f...