A seething flood of tooth, blade and brazen green flesh, the Greenskins make up the most barbaric and prolific raiding force in the Old World. Rather than a single race, they are a conglomeration of smaller sub-races, banded together by their like-minded brutality, lack of intelligence and lust for carnage. Mobs of Savage Orcs roam the Badlands plains while Night Goblins move unseen in the deep tunnels of the Underway. Whenever the feeling takes them they pour out in earth-shaking numbers to plunder other Race’s settlements, invaders to the end. After slaughtering the occupants, they daub the walls in crude graffiti, settling amongst the corpses until restless green fingers start itching for bloodshed once more. Greenskins lack any form of government, subscribing instead to a ‘might-makes-right’ ideology that sets the nastiest and sneakiest firmly at the top of the pecking order. Orcs, brutish and aggressive make up the ruling class. Goblins, malevolent and cunning, are subjugated by the Orcs in exchange for their begrudging protection. Trolls, Giants and other fell creatures are easily coerced to join their cause with the promise of battle, loot and a few of the weaker goblins thrown their way as a tasty snack. The variety and versatility of Greenskin armies and the brute strength of their warriors more than makes up for what they lack in intelligence and diplomacy.

Endlessly seeking out conflict both within and without, Greenskin hordes roam from the Old World in search of worthy opponents to stomp into the ground. At the head of each is a Warboss. The only way to earn this rank is to murder the current Warboss. As such it is a title earned by only the biggest and nastiest Orcs of the lot. Greenskins live to fight, and if their Warboss cannot sate their appetite for battle, their numbers will dwindle as infighting takes hold. When word spreads of a truly might Warboss however, momentum builds quickly. With each successive victory, more and more Greenskin mobs join the horde. Eventually, these patchwork armies merge to become a WAAAGH! – An unstoppable Green tide that leaves nothing but ruin in its wake. 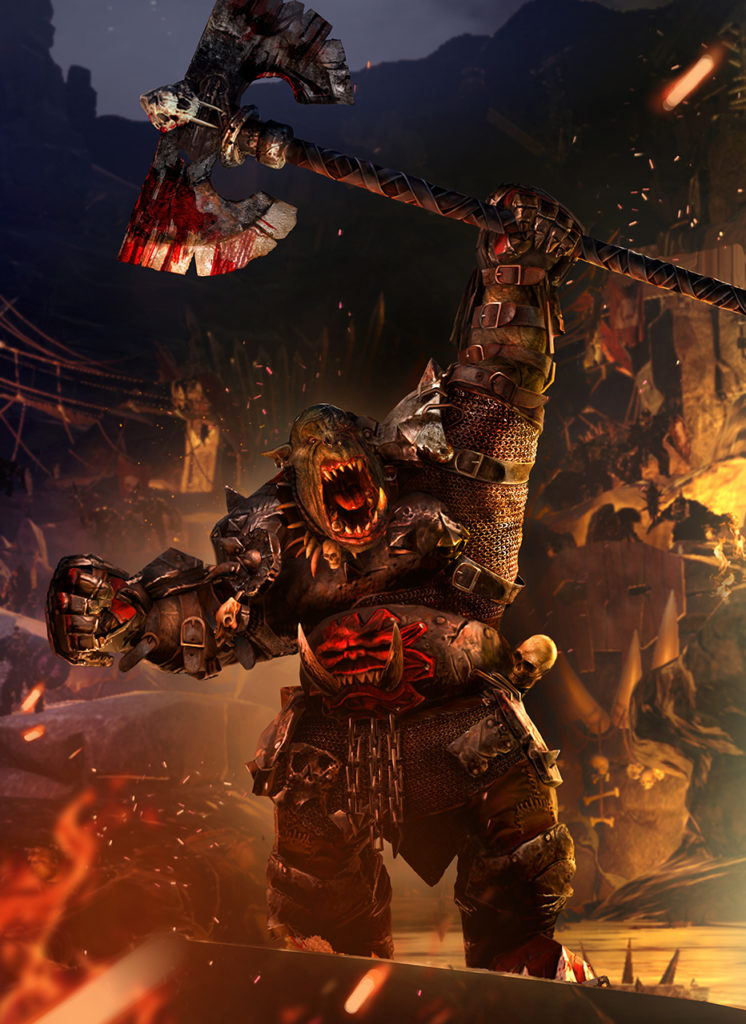 Players choosing the Greenskins will be able to select from the following Legendary Lords with which to lead their Grand Campaign.

Grimgor Ironhide’s lust for violence is vast, even for a Black Orc. If a single day passes without a fight, he’ll turn his one good eye towards his own army. With a few malevolent words, he’ll start vicious arguments in the hope that the infighting will keep his boredom at bay. Two days without a battle and Grimgor’s rage takes hold of him. Any and all who stand in his way are crushed, save perhaps his personal retinue of Black Orcs, the Immortulz. This veteran bodyguard have followed Grimgor into countless battles. They love their bloody work, and they’re very good at it. With the Immortulz at his side, his enchanted ever-sharp axe Gitsnik in his hand, and an army of eager Greenskins behind him, Grimgor sets out to fulfil his sole desire: to wage war until the ground is flooded with the blood of his enemies.

Azhag is unusual amongst Orcs, and all the more terrifying because of it. Whereas most Orcs rely only on their brutish strength to achieve their ends, Azhag can grasp far-seeing strategy, utilising it to gain the edge on his enemies. To have such a tactical mind as Azhag possesses is entirely peculiar to most Greenskins. Though plenty are more than happy to follow a Warboss who wins the battles he picks so consistently and with such flair, something about him seems unnatural. He talks with words other Greenskins do not understand. At times, his eyes glow with a dark aura. Occasionally he can be found in a trancelike state, mumbling or even arguing with himself incoherently. Rumours abound that the iron crown sitting atop his brow is actually an age-old relic, possessed of an ancient and powerful evil. Through this artefact Azhag has achieved a dark communion, augmenting his simple mind with the notably un-Orcish gifts of foresight and guile, earning him his fearsome reputation and grizzly title.

–              The Greenskins’ armies comprise a host of Orcs and Goblins with a supporting cast of Trolls, Giants and Spiders. The variety of units within their roster means that a Greenskin army is highly versatile and adaptable.

–              Fightiness! – Greenskins live to fight. Make sure yours have plenty of enemies to stab at, and make sure they win. Go too long without a successful battle and your troops will fall to infighting, suffering attrition as camp arguments are settled.

–              Their constant thirst for battle doesn’t stop with their enemies, as such Greenskin tribes are constantly fighting. Settle these petty quarrels, unite all Greenskin tribes under your banner and unleash their combined fury in a WAAAGH! the likes of which has never been seen. 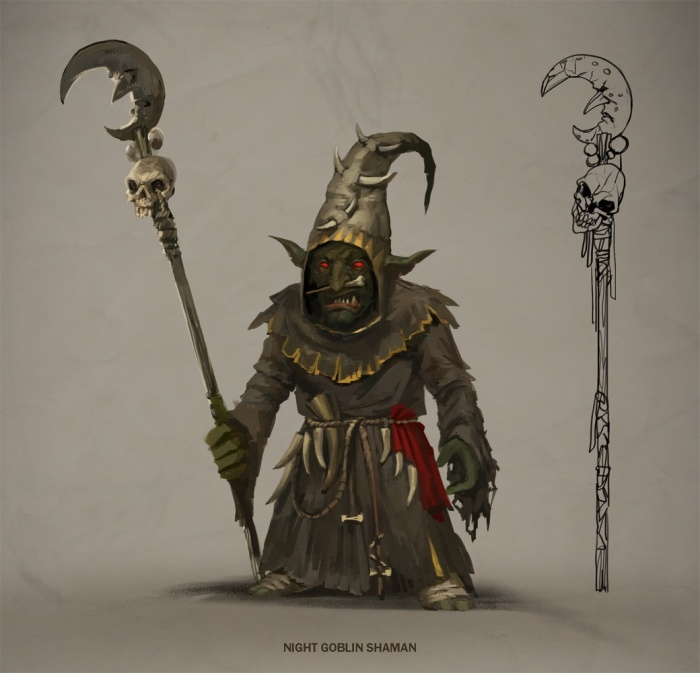 – Night Goblin Shaman Night Goblin Shamans wear the easily recognisable hoods of their kind. They dwell in caves and tunnels, only emerging when the sky above is dark. Night Goblins cultivate all sorts of potent and mysterious fungi deep in the dark places of the world, and the Night Goblin Shamans are the most knowledgeable in this regard. They consume vast amounts of these mushrooms in potions and rituals and as a result are known for being exceptionally deranged, even when compared to other Night Goblins.

Hulking creatures whose hunched appearance belies their mountainous strength, Trolls are coerced into Greenskin ranks with a tasty Goblin runt to snack on, coupled with the promises of loot, glory and bloodshed. They are fond of vomiting on their enemies. The acids they produce in their stomachs are strong enough to digest metal. Worse ways to die are hard to find indeed. Besides being abominably dangerous, Trolls are also immensely difficult to kill; their flesh regenerates quickly when damaged. They are even able to regrow severed heads. Even those that seem utterly destroyed in battle may find themselves entirely whole again the following day.

Of the many spiders that infest the wild woods, the colossal Arachnarok Spider is by far the largest. A nigh-unstoppable predatory behemoth, larger than an Empire townhouse, the webs the Arachnarok weaves are thicker than an Orc’s arm and can encircle an entire hamlet. Once feared and understandably avoided by the Forest Goblins, in time they grew to revere these gigantic monstrosities, offering them sacrifices and using Shamanic magic to broker an uneasy alliance. Now many a Forest Goblin mob will deliberately set up camp near an Arachnarok lair, doing their best to appease them. Some Arachnaroks have grown to enjoy the relative luxury of being pampered and fed by these Goblins, and in return allow them to scamper around on their vast abdomens, as if they were their own broodlings. The bravest Goblins use the backs of these gargantuan arachnids to build weapons platforms, resulting in a singular entity that is powerful at range and unstoppable in melee.

First developed as a means for nomadic Goblin tribes to scout surrounding areas, the Doom Diver has since become a dreaded weapon of war. A small but powerful catapult, powered by a huge stretchy sinew (often cured Troll intestines), the device lobs Goblins high in the air where their homemade wings allow them to glide towards their chosen target. As they rapidly gain downwards momentum they let loose a scream of equal parts terror and ecstasy before smashing headfirst into whatever poor creature they land on. Few Goblins live to see such dizzying heights, none survive.

Descendants of the long-forgotten Sky-Titans, Giants are large, lumbering brutes that roam the Old World in search of food and battle. Battle usually comes first, and provides food as a secondary reward. They are easily recruited to fight alongside a Greenskin horde, as this greatly increases their chances of having a constant flow of food, fighting and strong liquor. For the Greenskins, nothing is more worthy of cheering than seeing one of ‘da big fellas’ putting his foot on an enemy and grinding them to paste. So prized are these lumbering behemoths that rival Greenskin tribes will often fight over a Giant, the winner gaining the titanic warrior for their ranks, the Giant happily eating fallen warriors from both sides.

o Faction-wide trait: ‘Harbinger of Gork’ – Battle-hungry Greenskins itch to get into Grimgor’s ranks, more so as tales of his conquests spread. As a result, Grimgor finds it easier and cheaper to recruit for and build the massed hordes he need for his WAAAGH!

– Azhag the Slaughterer – Melee o Faction-wide trait: ‘The Evil Crown’ – Azhag’s affinity with dark sorcery can be sensed by all who come into his presence. For this reason, fostering relations with the undead is much easier for him.