(Or the one where CA WENT TOO FAR!)

So the chief request from players – and one that’s grown in volume with every DLC and FLC release – is that we bring the old-timers up to a fighting trim equivalent to the new guys.

Your wish is our command. This is the update that supercharges the foundation races.

All the old Legendary lords get bonus campaign buffs and new, extra skills trees. The Empire, under AI control, starts with an entire province, giving it a much stronger start. The Warriors of Chaos have a whole slew of tweaks and changes, increasing their campaign momentum and enabling easy vassalisation of Norscan tribes. And Wood Elves finally have new followers (Yay!). If these changes appear sweeping, it’s probably because they are. The Old World is in for a shakeup.

As always, we’ll be paying close attention to your experiences and feedback, and based on that, we might reign in some of the changes. But play it and judge for yourself. We want to let things bed in before we consider any redress.

In the meantime, have fun!

On with the show…

The tribes of the frozen north have awoken! Wulfrik the Wanderer and Throgg the Troll King lead their hunting parties south, seeking worthy prey across the Old World with which to honour their dark gods.

With their towering, slavering beasts, they present a significant new challenge to all players, and are also available to play for owners of the Total War: WARHAMMER – Norsca Race Pack DLC. This DLC is available free if you preorder Total War: WARHAMER II, or can be bought separately direct from Steam.

Creative Assembly turns 30 this year, and to celebrate this major milestone in our history we’re giving away a birthday present to all players. The “30th Anniversary Regiments” are a collection of 30 new elite Regiments of Renown for use in your game, and you can grab them for free from your inventory on TotalWar.com by logging into your Total War Access account. If you haven’t yet registered for an Access account, you only need a valid email address and you can do so from that link. There will be other free items for you to collect in your inventory when you join.

To improve the Warriors of Chaos gameplay experience, we’ve made a number balance and design changes to the way they work. Broadly speaking, you’ll now find it easier to vassalise the Norscan tribes, and maintain a greater sense of momentum in your crusades of destruction across the Old World.

-Awakened tribes will now become your vassals instead of allies

We’ve heard a lot of talk regarding how much weaker the Empire is, relative to its chances of success at the game’s launch. To combat this, when the Empire is under AI control, it now begins play with full ownership of the province initially controlled by the Empire Seccesionists AI faction, comprising the settlements of Helmgart, Eilhart and Grunberg.

Along with Altdorf herself, this gives the Empire a full province, meaning more stable and profitable base to work from and, coupled with new Skill Trees and Campaign Effects for Karl Franz and Balthasar Gelt, this should give them a greater fighting chance. We’ll be interested to hear how this change affects your games, so keep us posted in all the usual places.

After an exhaustive (and perilous!) search of Athel Loren turned up nothing, we’ve finally unearthed a clutch of new Followers for Orion, Durthu and their loyal Lords. The tricksy knaves were holidaying in Parravon all along…

Karl Franz increases the recruitment level of new lords by 2.

Volkmar The Grim increases the chance of magical items drops for his faction.

Ungrim Ironfist increases the speed of all forces factionwide by 10%.

Azhag The Slaughterer increases the Research Rate of his faction.

Archaon The Everchosen suffers a diplomatic negative with all factions.

Kholek Suneater’s army suffers an increased chance of being ambushed.

Sigvald The Magnificent has a diplomatic bonus with Norscan tribes.

Malagor The Dark Omen gains a diplomatic bonus with other Beastmen Warherds.

The Prince of Altdorf himself now has an even greater variety of unit, army and personal buffs, making him a more effective leader overall.

Best of the empire

All units in Karl Franz’ army:

The Supreme Patriarch now brings heavier technological and magical support for his army, and his Imperial Pegasus is now called Quicksilver.

All units in Gelt’s Army: +6 Armour

Metal to Gold to Magic

The Slayer King now gets further combat buffs. The more combat damage he sustains, the deadlier he becomes, with two optional upgrades to his Deathblow augment, making it either Determined, or Extremely Daring. The player may only choose one!

The saturnine steward of the Dammaz Kron is now an even greater leader in both campaign and battle.

Income from all buildings +5% (local province)

Grudge Against the Greenskins

Grudge Against the Vampire Counts

Grudge Against the Elves

Krell degrades at half speed

Krell no longer degrades in battle

In addition, all Master Necromancer Lords under Kemmler get two new 3-tier skills:

Lord of the Scourge

The Greenskins’ crowned sorcerer gains a new range of campaign and low-tier unit buffs, improvements to his command of the Winds of Magic, and Regeneration. Azhag also benefits from a revised starting army composition, gaining Orc Boar Boy Big’Uns, Orc Big’Uns and Trolls.

As the Everchosen marshals his twisted forces agains the Old World, he brings new improvements to core units, Lords and Heroes in the roster.

The Grand Marshal of Chaos

Knights of the Herald

If looks could kill… Sigvald’s vanity swells ever further, bringing unexpected benefits to his troops and stirring enmity in other Chaos Lords!

-MPC quest chain blockers: in co-op campaigns, players can now head straight to a quest battle and not get caught up in missions that can’t be completed, which previously blocked them from completing the quest.

-Fixed a skinning issues with the medallion around the Beastmen Giant’s neck.

-Fixed a rare crash/floating point exception when loading into a Grand Campaign as Karl Franz.

-Fixed a bug where the Paladin hero could lose his shield during an attack animation when mounted on a Warhorse.

-When the Bestigor Herd are in melee combat, their axes will no longer become misaligned with their hands between attacking and turning.

-Improved how the Royal Pegasus Knights are holding their lances when zoomed in.

-Improved the idle animation when the General of the Empire is on the Hippogryph mount.

-Chaos Sorcerers will no longer be able to cast Searing Doom twice in quick succession.

-AI Vampire Counts are no longer able to recruit Regiments of Renown when the player is the Von Carstein faction.

-When a quest appears which requires the player to embed a Hero, the player can now use the Unit Exchange system to embed the Hero.

-When ordering Archaon to cast a Fireball at an out-of-range unit, he will now move into range then fire.

-Minor smoke effects/haze will no longer appear black at the edges of siege maps, as experienced by a few users.

Regiments of Renown: 10 cooldown period after the RoR has been killed or disbanded before they can be recruited again

Earth Blood & Upgraded: Halved duration to 7 and 14, reduced casting cost to 6 and 11 respectively

Reikland Runefang: Re-designed to be an AoE attack and leadership buff.

Mist of the Lady: Added an ‘engaged in melee’ condition flag.

Wrath of Manann: Should deal more damage to targets as detonation forces have been adjusted. 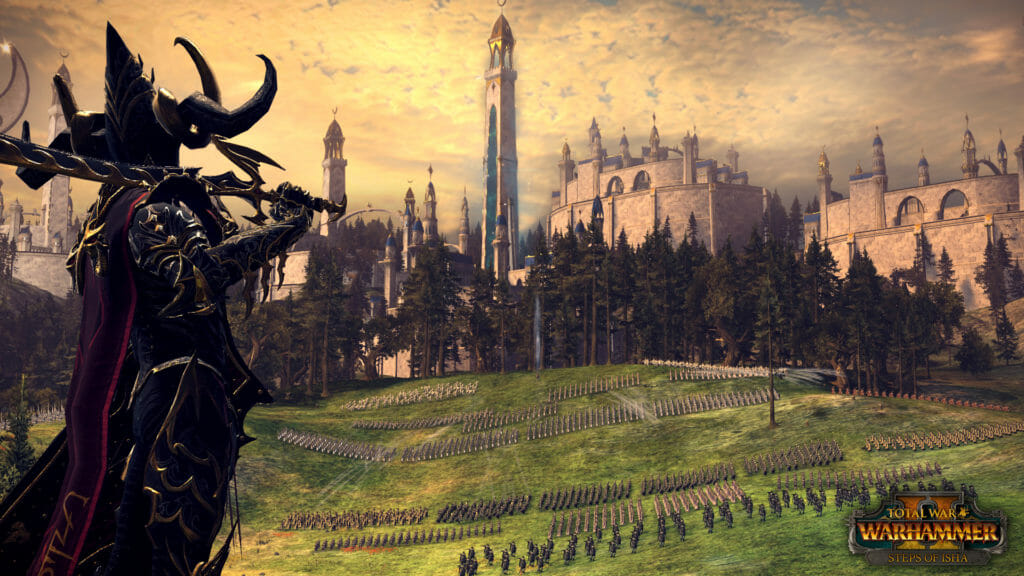 General – Fixed a crash during end turn cycles, noticeable on...