Lay waste to the Old World as the dreaded Chaos Warriors. This Pack includes a full roster of bloodthirsty units, terrifying mounts and monstrous creatures. Lead the corrupted Chaos hordes as one of three new playable Legendary Lords. Embrace the Ruinous Powers as you embark on brand new quest chains, unlocking powerful items and gaining glory in the name of the dark Chaos Gods.

Beyond Kislev, beyond Troll Country, beyond even the barren Norsca Peninsula lies a land shrouded in darkness, frozen in an unnatural, never-ending winter. Here, the mortal realm and the immaterial realm of Chaos overlap, creating an uncontrollable gateway to that infernal dimension from which all manner of nightmarish creatures spew forth.

It is a place where few mortals have dared to venture, and even fewer have returned. The wild people that live in the lands to the south are devout in their worship of the Chaos Gods and many seek to journey north and offer themselves up to become tools of their will. Those that do survive this unholy pilgrimage and live to tell the tale are irreversibly altered. Clad in dark armour bearing the dread marks of ruinous favour, possessed of an unwavering resolve to carry out the will of their malevolent deities, with the indomitable Archaon the Everchosen as their leader, these are the mighty Chaos Warriors!

Players choosing the Chaos Warriors will be able to select from the following Legendary Lords with which to lead their Grand Campaign. 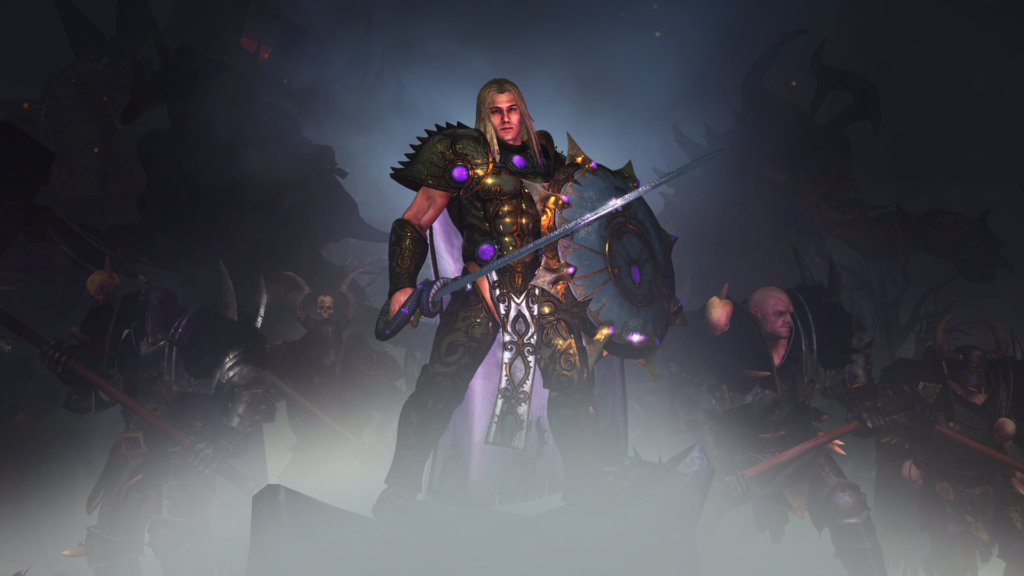 Beautiful from birth, Sigvald’s fondness for hedonistic excess saw him exiled from his tribe but also gained him a powerful patron: Slaanesh. Now, he heads an army devoted to himself. Slaying anything he deems ugly or unsavoury, he fights as much for his perverse ego as he does for Slaanesh.

A former Sigmarite Templar, Archaon stumbled upon an ancient doctrine that contained within the secrets of his faith. Renouncing his allegiance to Sigmar he journeyed north to the dreaded Chaos Wastes to offer his service to the Chaos Gods. Here, the Ruinous Powers gave him their blessing to set out on his quest to become the Everchosen; the Lord of the End Times. 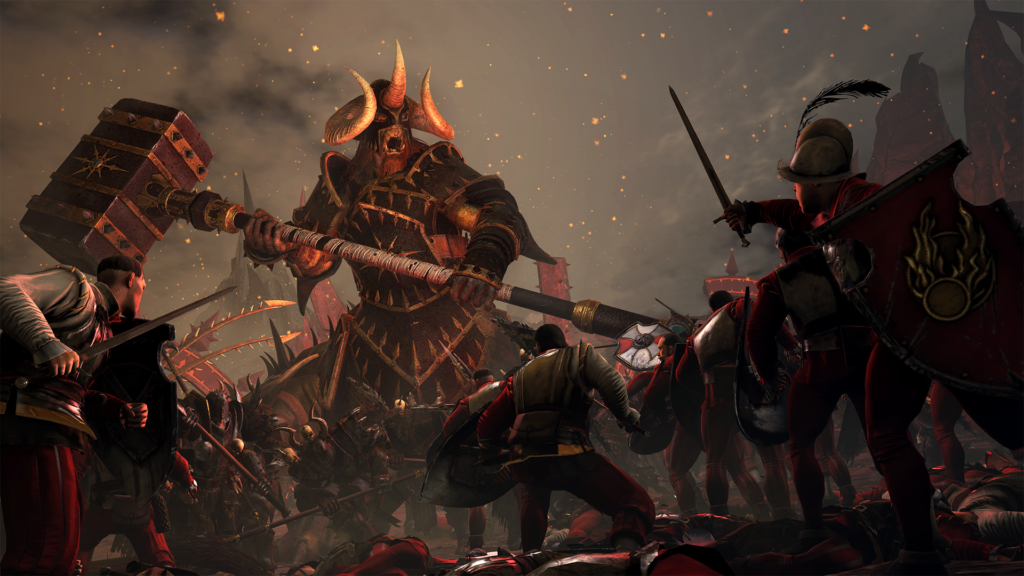 Kholek Suneater is a formidable figure to behold. A gigantic Dragon Ogre, believed by many to be the second eldest of all Dragon Ogres, he towers over the battlefield swinging his gigantic hammer with ease. He is considered by some to be a God.

– New Horde playstyle! Introduces Horde-style gameplay to Total War: WARHAMMER, allowing the Chaos Warriors to raze enemy settlements and set up encampments anywhere, taking their war spoils with them. The armies of Chaos rest only when exhaustion halts their marching, leaving nothing but corruption and ash in their wake.
– New units, buildings, items and technologies: Unlock new units, buildings and technologies. Seek out the powerful Artefacts of Chaos and become the true Herald of the Apocalypse.
– Spread corruption in the name of Chaos! The foul energies that drive the Chaos Warriors leave ripples that permeate any place they pass through, influencing the populace. Use this to spread dissent amongst the enemies of Chaos, creating cultist uprisings through the proliferation of dark worship. 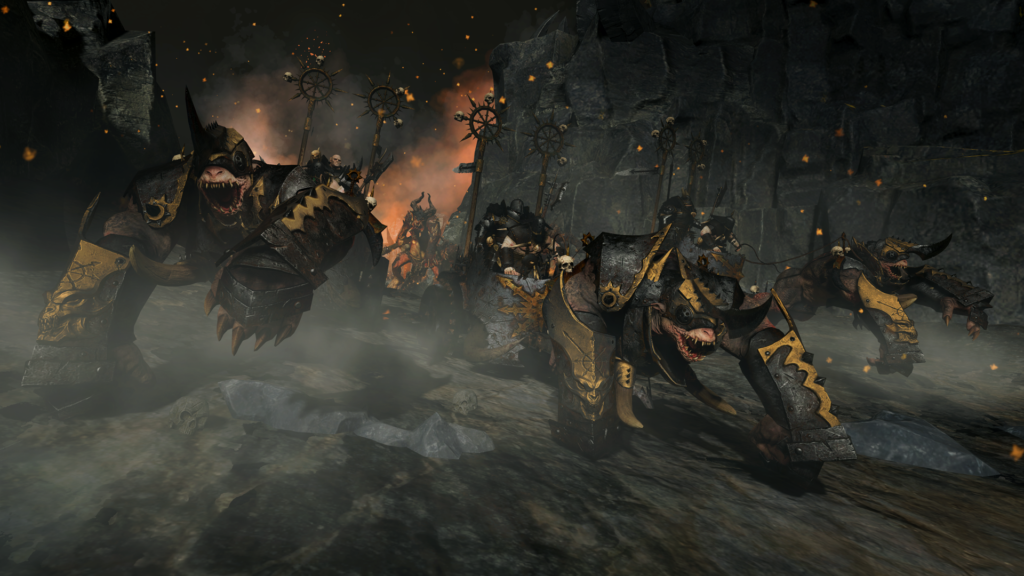 No longer fully human, the Chaos Warriors have been altered to become living weapons, honed perfectly to do their dark masters’ work. Imbued with the strength of chaos, enrobed in dark hell-forged armour, they can best several mortal warriors easily. They have no need for food, drink, sleep or other mortal comforts, subsisting on carnage alone.

Once, these great beasts sailed the skies as their brethren still do. Now, corrupted by change, these two-headed dragons are malevolent predators in their own right. One head spews forth dark flame, the other corrosive gas. Only the most powerful can ride such a monster, and even then it is only a temporary alliance, Chaos Dragons can never be tamed.

Once proud men, their long-standing service to the Chaos Gods has left them altered. Where once they killed in the name of ambition and glory, their mutations have made them something less than human. Now they fight, whirlwinds of flailing flesh, hair and claw, only to satisfy their unending, unnatural hunger.

These magnificent, terrible beasts are amongst the most ancient and impressive of all living creatures. Their immortality is a gift from the Chaos Gods, given in exchange for an eternity of dark servitude. Seeking out lightning, they swing their gigantic weapons with ease, cleaving all but the most powerful warriors to ribbons.

A massive construction of hell-forged metal, mutant beast and jagged blade, the Gorebeast Chariot is ridden by some of the most powerful Warriors of Chaos and serves a single purpose: to shatter enemy lines with unstoppable force.

The Hellcannon is a massive artifice of metal and daemonic power that hurls bolts of raw arcane energy across the battlefield, vaporising anything in range. Part war machine, part Daemon, this infernal construct is powered by the liquefied remains of fallen enemies and operated by a sturdy crew of Chaos Dwarfs. 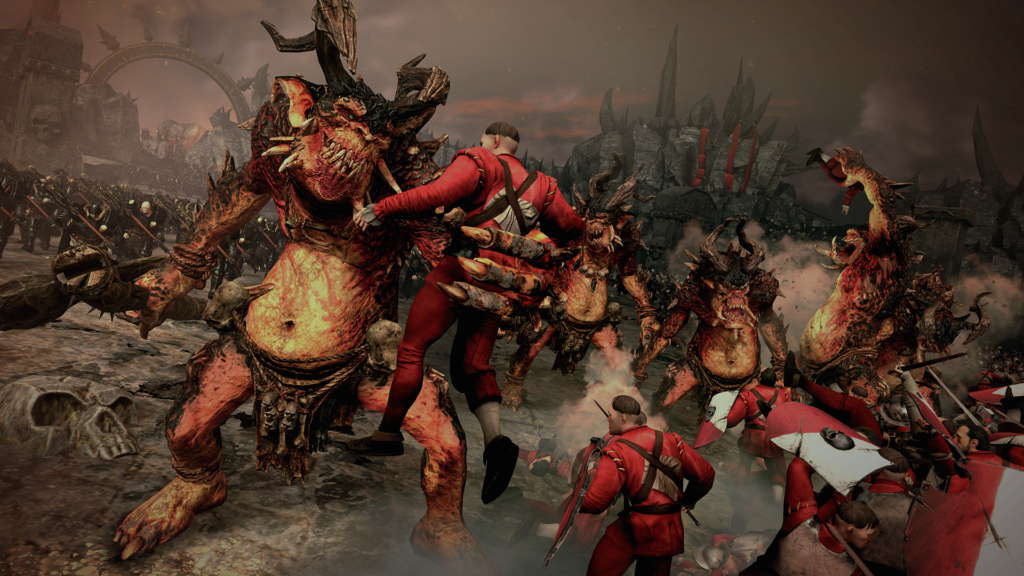 o Faction-wide trait: ‘Everchosen’ – With Archaon heading your invasion, not only will you be able to move farther on the campaign map, you find it much easier to recruit Chaos Warriors and Chosen.

o Faction-wide trait: ‘Scion of Slaneesh’ – Sigvald’s inflated sense of self-worth emanates to those around him, increasing the Chaos Corruption he causes and giving him leadership bonuses versus human enemies.

o Faction-wide trait: ‘Herald of the Tempest’ – Kholek is a mighty force to behold, even to other Dragon Ogres of his kind. As such both Dragon Ogres and Dragon Ogre Shaggoths have reduced upkeep when playing as Kholek.

*These units are exclusive to the Chaos Warriors Race Pack and will not appear in the base game if you do not have the DLC..