As we come to the end of our roster reveals, you know the story by now – this blog will cover the daemonic ranks of Slaanesh that will be at your behest, alongside some of the sadistic abilities that will help enrapture the souls of all who stand before you. Here’s a little reminder of how they’ll play…

On the battlefield, Slaaneshi armies use their unparalleled speed and armour-piercing capabilities to sow discontent among the enemy ranks through hit and run tactics, before isolating units and dealing a quick final blow with the aid of numerous debuff spells and abilities. Their armies gain battle currency by killing routing units which be used on three abilities which accentuate their playstyle; Fascination, Narcissism, Sweet Sorrow.

On the campaign map, factions of Slaanesh strive to spread the Dark Prince’s hedonistic message at every turn. Their mechanics include: 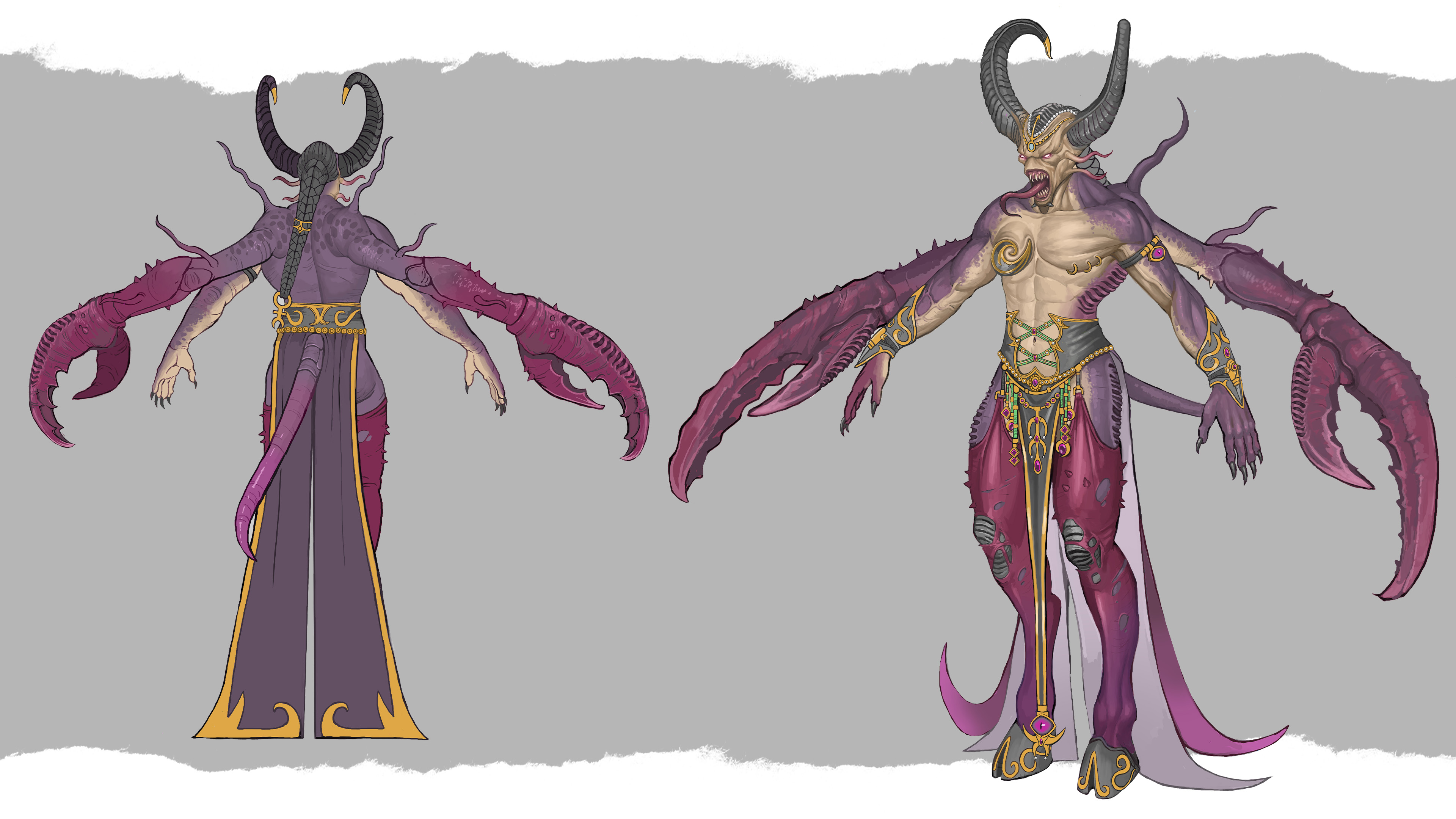 N’Kari, the Arch-Temptor, is a notorious and ancient Keeper of Secrets that scours the immortal and mortal realms to experience the ultimate sensation and taste ecstasy in its purest form. Over recent millennia he has developed a hatred for the Elven twins of Ulthuan, and whatever his short-term goals, the next part of the plan will surely involve their eternal misery.

On the battlefield, he is an extremely fast and vicious Legendary Lord that excels at hunting isolated enemy characters and units. His unique passive ability, Harvester of Souls, heals him whenever an enemy unit has been destroyed nearby, whilst his Willing Prey ability significantly reduces enemy melee defence and attack, leaving them vulnerable to a quick and agonising death. 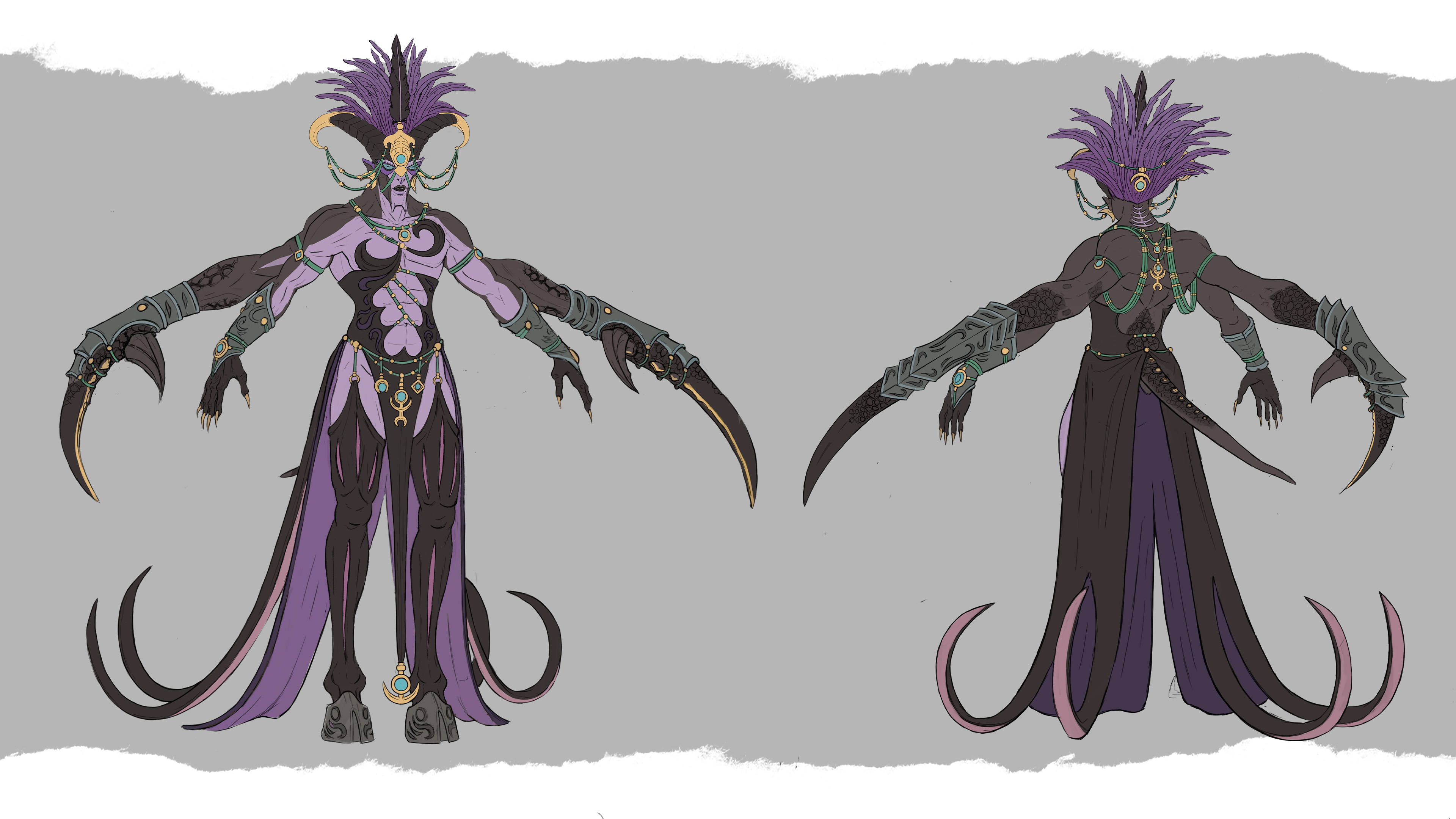 Imperious, languid… depraved, the Exalted Keeper captivates the minds of its foes even as it tears the flesh from their bones. Much like their Legendary Lord counterpart, these towering despoilers can scythe through infantry formations and heavy armour alike with a flurry of deadly attacks. Each is also a sorcerer capable of unleashing foul magics that can allure their foes or utterly destroy them, and can specialize in either the lore of Shadows or the lore of Slaanesh, which includes:

Note: All Exalted Lords from the Daemonic ranks cannot be directly recruited in campaign. Instead, their Herald counterparts must gain sufficient experience before being presented with the opportunity of converting into their deadly counterparts.

An ascended Daemonette and Sorceress of seduction, the Herald of Slaanesh is one of the fastest and most deadly of the Dark Prince’s courtesans that have the honor of attending his every dark whim and desire.

Although proficient in the use of either the lore of Shadows or Slaanesh, the Herald also has access to one of three Locus abilities to further enhance their support capabilities; Grace – A ward save that greatly improves melee defence and physical resistance. Swiftness – An augment which greatly improves charge bonus, speed and charge speed. Beguilement – A hex which reduces leadership and melee defence. 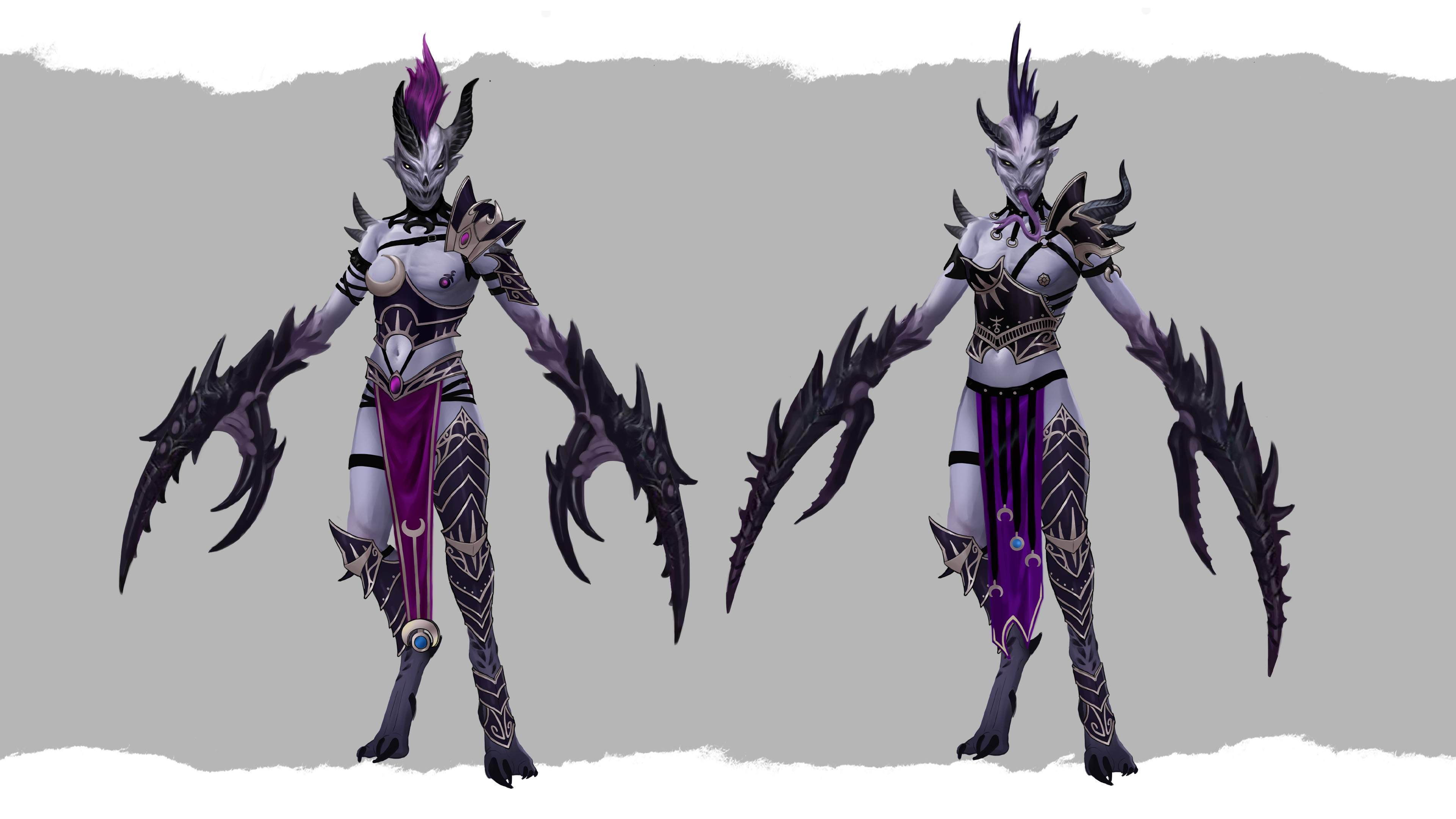 The Alluress is a Daemonette that has gained the notice of Slaanesh himself, the whispered secrets of his domain granting her untold prestige and power. These maidens of ecstacy are some of the fastest and most deadly of Slaanesh’s courtesans and are creatures of impossible grace and horrifying cruelty.

As Daemonette with godlike aspirations, their battlefield role isn’t too dissimilar to that of the Herald of Slaanesh given their proficiency in both the lore of Shadows and Slaanesh, alongside access to the same Locus abilities that further enhance their support capabilities. 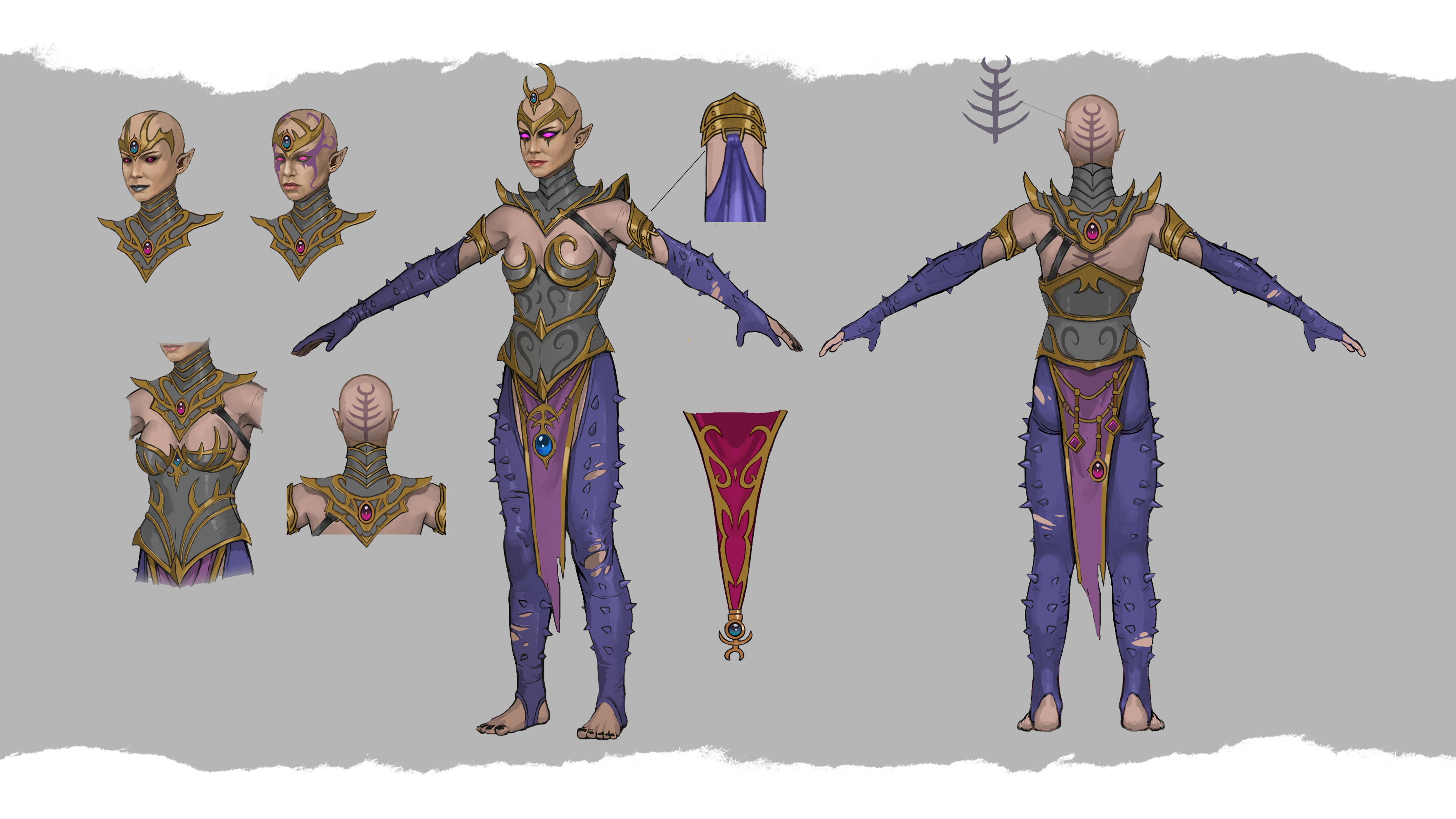 Slaanesh’s Cultists have tormented countless souls and spend their time gathering secrets and seducing others in the Dark Prince’s name.

Whilst Cultist’s of Slaanesh are extremely skilled melee combatants, they are a stronger force when spreading the Dark Prince’s hedonistic message throughout the mortal realms within the campaign map. They can be used for clandestine operations throughout enemy and allied settlements where they can establish one of four Slaaneshi cults (Salon, Atelier, Parlour, Den), each providing a variety of dark boons to your campaign strategy. 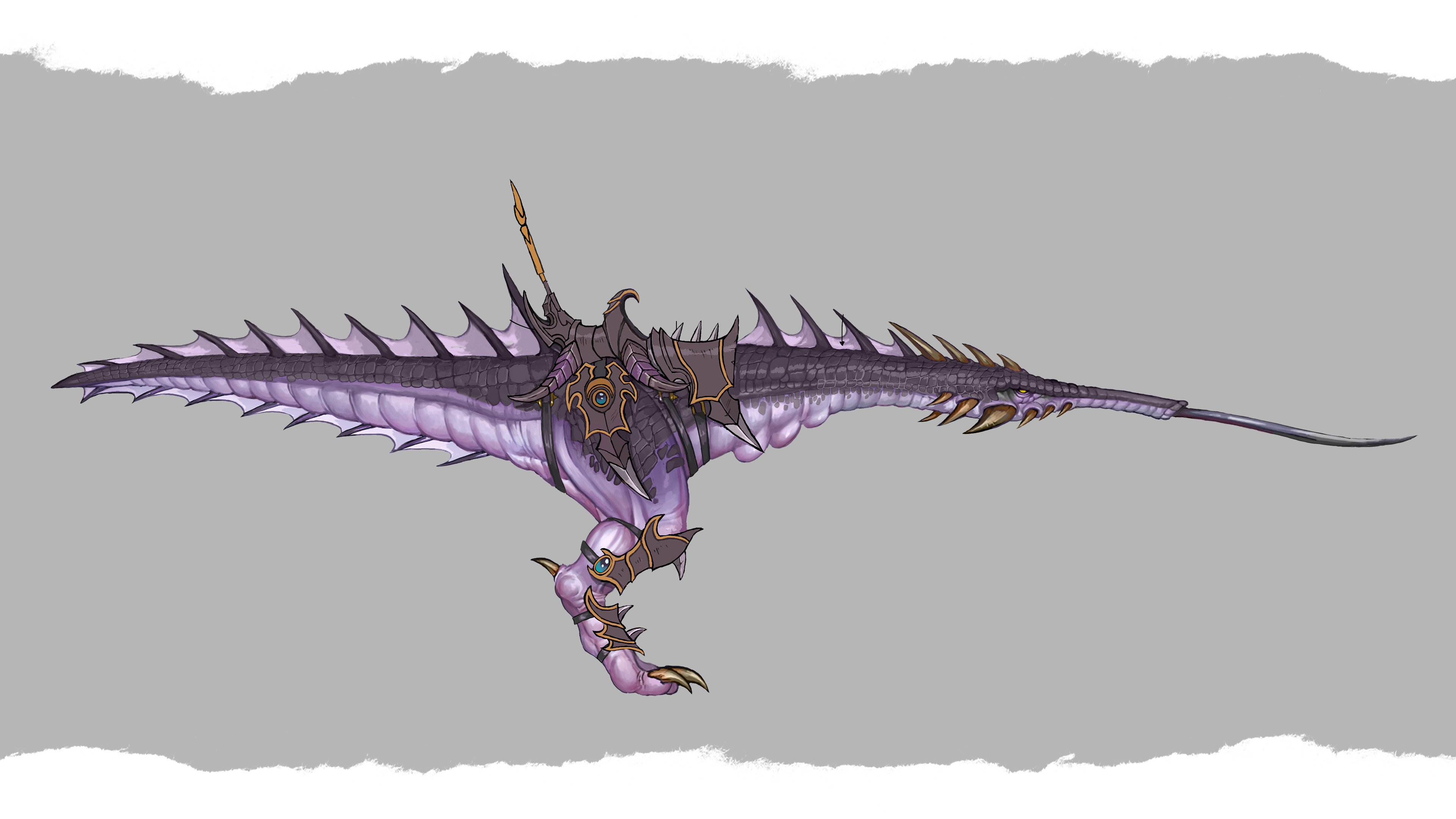 The Seekers of Slaanesh are the outriders of Slaanesh’s daemonic hosts. Commanded by masterful Daemonettes, seekers cover vast distances at unbelievable speeds before visiting upon their enraptured foes with a razor-clawed ballet of blissful torment and agonized yearning.

Their Steeds are lithe, unsettling creatures with muscular limbs and long, terribly poisonous tongues – it is said a single caress from a Steed’s tongue is enough to drive a man into a deathly rapture.

The elite squadrons of Slaanesh’s daemonic shock cavalry are led by Daemonette officers known as Hearsteekers. Armed with the unique Soulscent passive ability which provides significant increases to armour piercing and melee attack capability, it activates when the Heartseekers come within range of an enemy unit with morale wavering or lower. 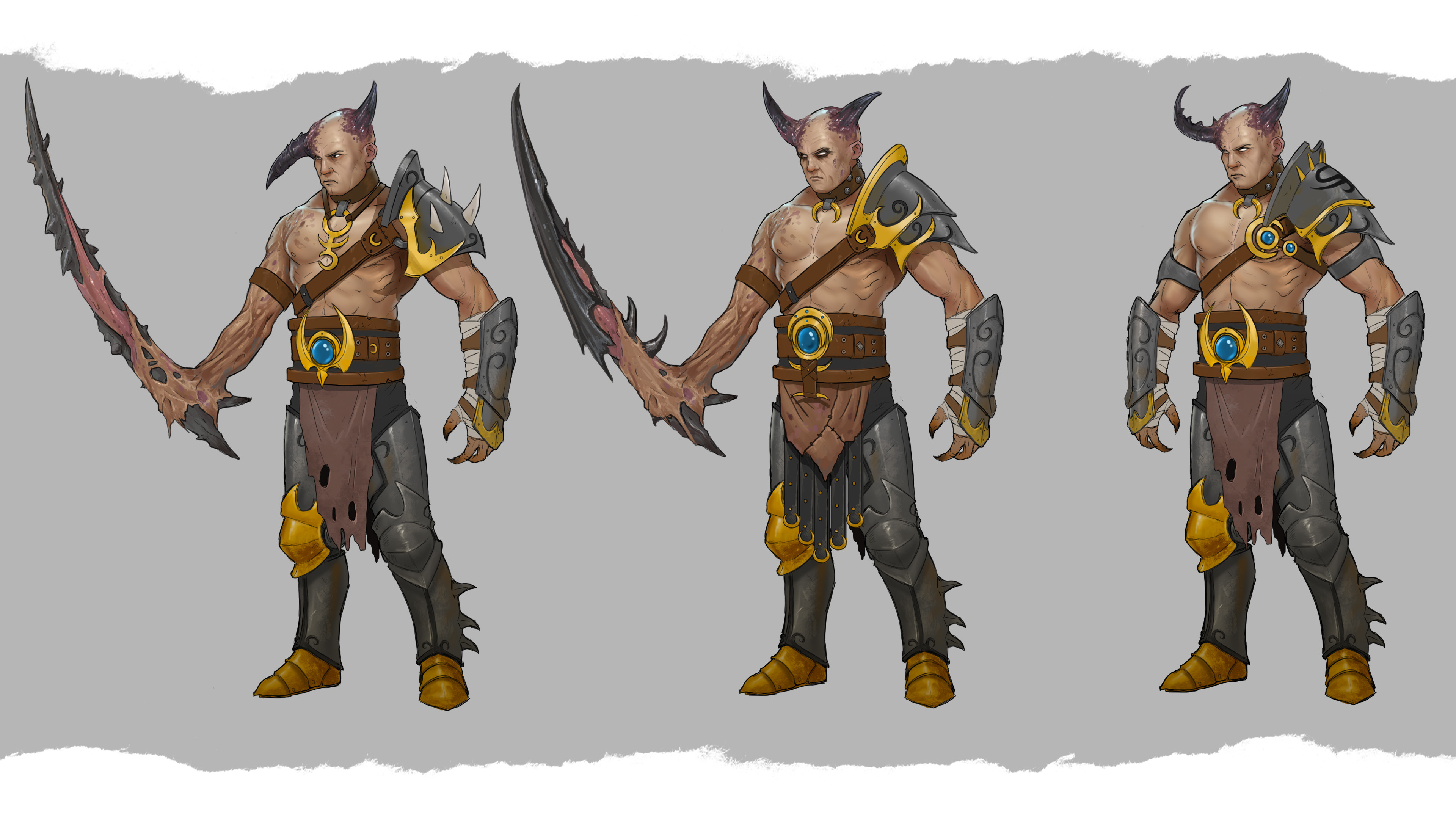 Hellstriders are vainglorious mortals granted the immortal power they crave – at the cost of everything they once were. They ride the daemonic Steeds of Slaanesh into war – indeed, they have no choice, for once they climb into the saddle they can never dismount. Those who use the long, whiplike Hellscourge as their weapon of choice are an expert in inflicting grievous wounds.

An efficient early-tier cavalry unit, they have access to a swathe of deadly tools including poisonous attacks, lightning quick speed and the Soul Hunters passive ability which increases damage resistance, leadership, and charge bonus with each kill made by the unit. 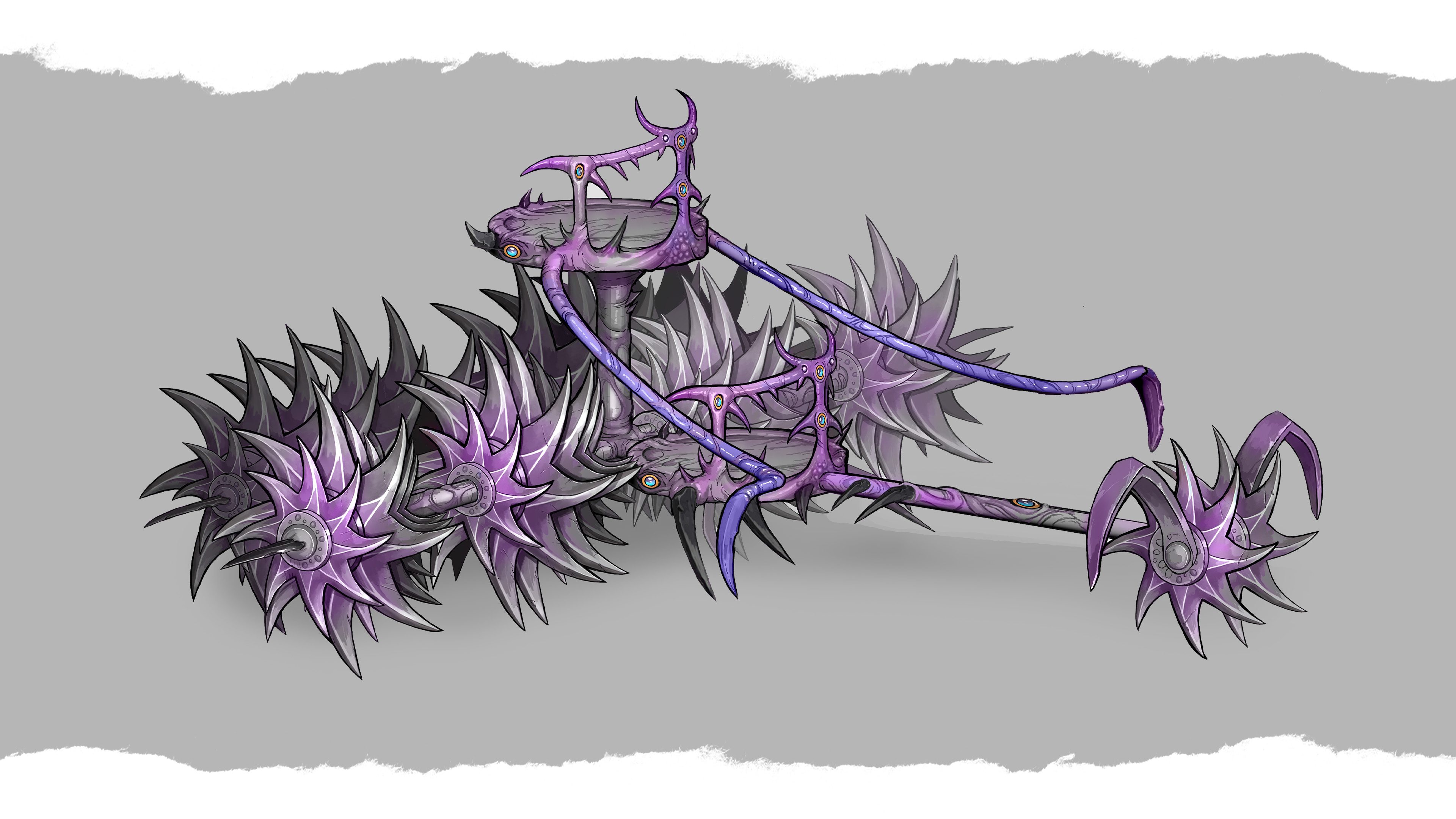 The most potent variant of Slaanesh’s chariots, it is an immensely fast daemonic construct pulled by the might of four Seekers and armed with an increased variety of horrifying blades and hooks to inflict maximum carnage. Those few unfortunate souls who escape its razored maw are descended upon by its unforgiving Daemonette riders. 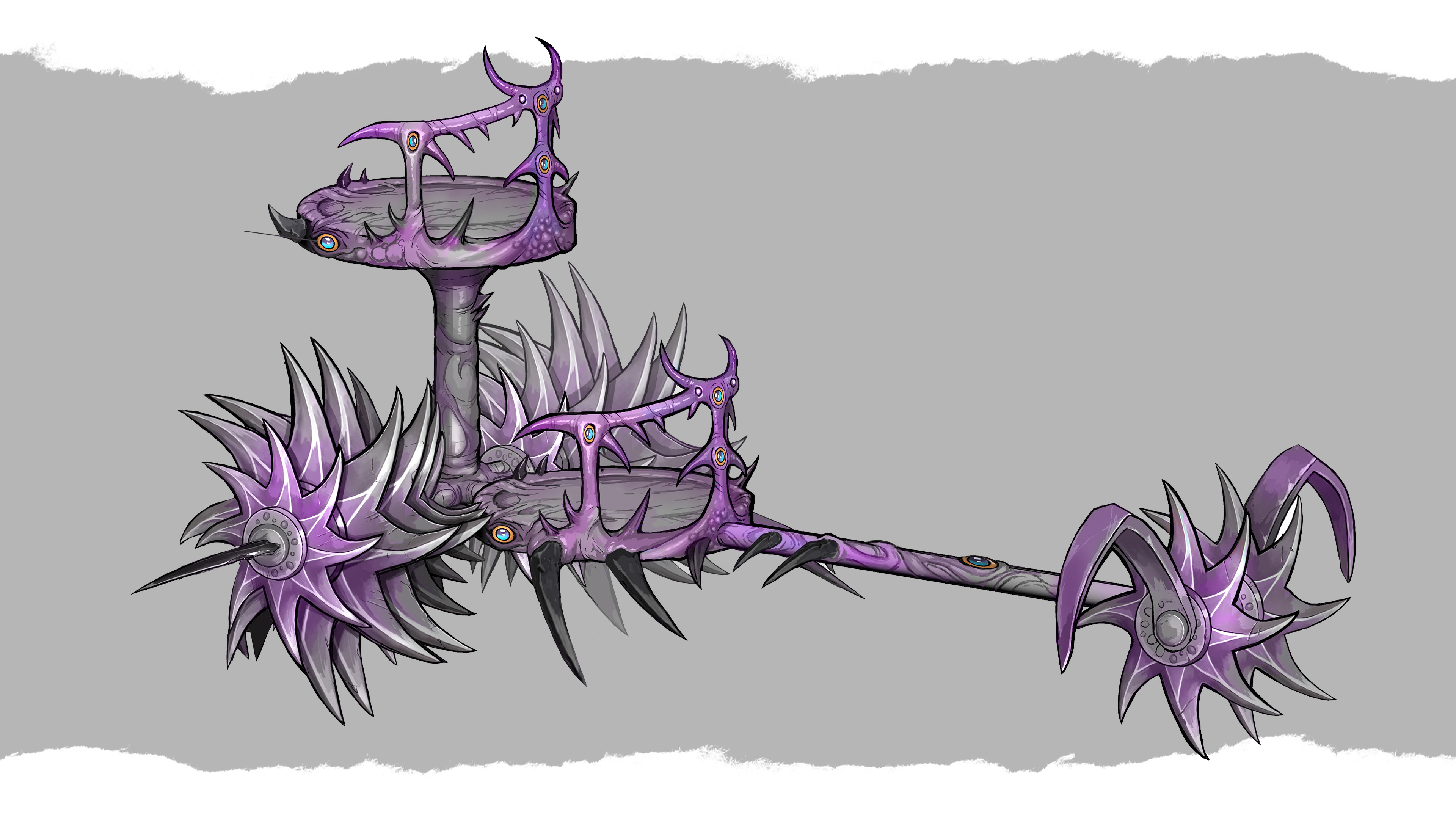 A bone-shredding chariot, commanded by capering Daemonettes, Seeker Chariots – also known as Machinery of Blissful Pain – dispense suffering across the length and breadth of the battlefield.

Unlike their shock cavalry counterparts, Seeker Chariots are not subtle creations. They are designed with but one intent, to maximize the agonizing torment of the unfortunate souls caught amongst their grinding axels. 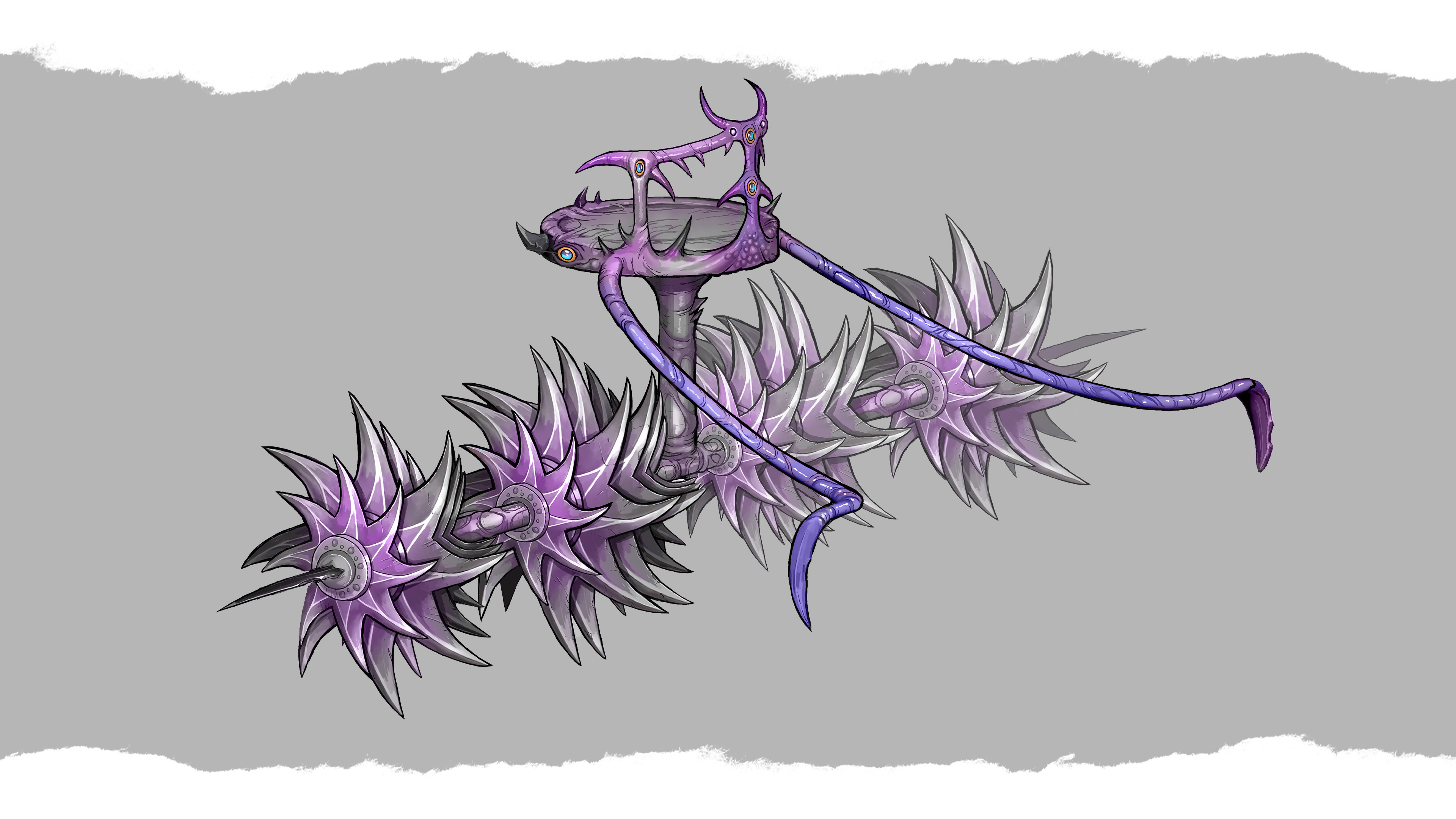 The Hellflayers of Slaanesh are brutal, barbed creations that only the most wicked minds could have created. The chariot is adorned with reaping blades which slice Slaanesh’s foes into delicate morsels, their suffering driving its riders into a rapturous frenzy.

To become a Hellflayer is to be punished by Slaanesh himself, for those unfortunate enough to command these mighty machines must spend a millennia serving the bloody harvest within the Gardens of Slaanesh, ever feeding the otherworldly fauna that adorns his realm.

Furies are yowling shards of malevolent energy – Chaos in its purest form. With little in the way of intelligence, they are utterly subservient to the whims of the Dark Gods, and shift in aspect and power as the balance of the dark pantheon alters. They are easily subjugated by other Daemons, whom they regard with a mix of dread and awe. Furies swarm at the edges of the battle, avoiding the thickest fighting if they can. Only when they sight a vulnerable victim do they descend, a wailing mass from which there can be no escape.

The marauders of Slaanesh are the mightiest of Norscans who have been recruited into the Dark Prince’s cruel ranks. Bereft of fear or pity, they delight in suffering and find rapture in sundered flesh. Some of them fight with blades that long ago mutated into their own tissue, whilst others carry a mass of writhing lashes that move with an intelligence of their own. 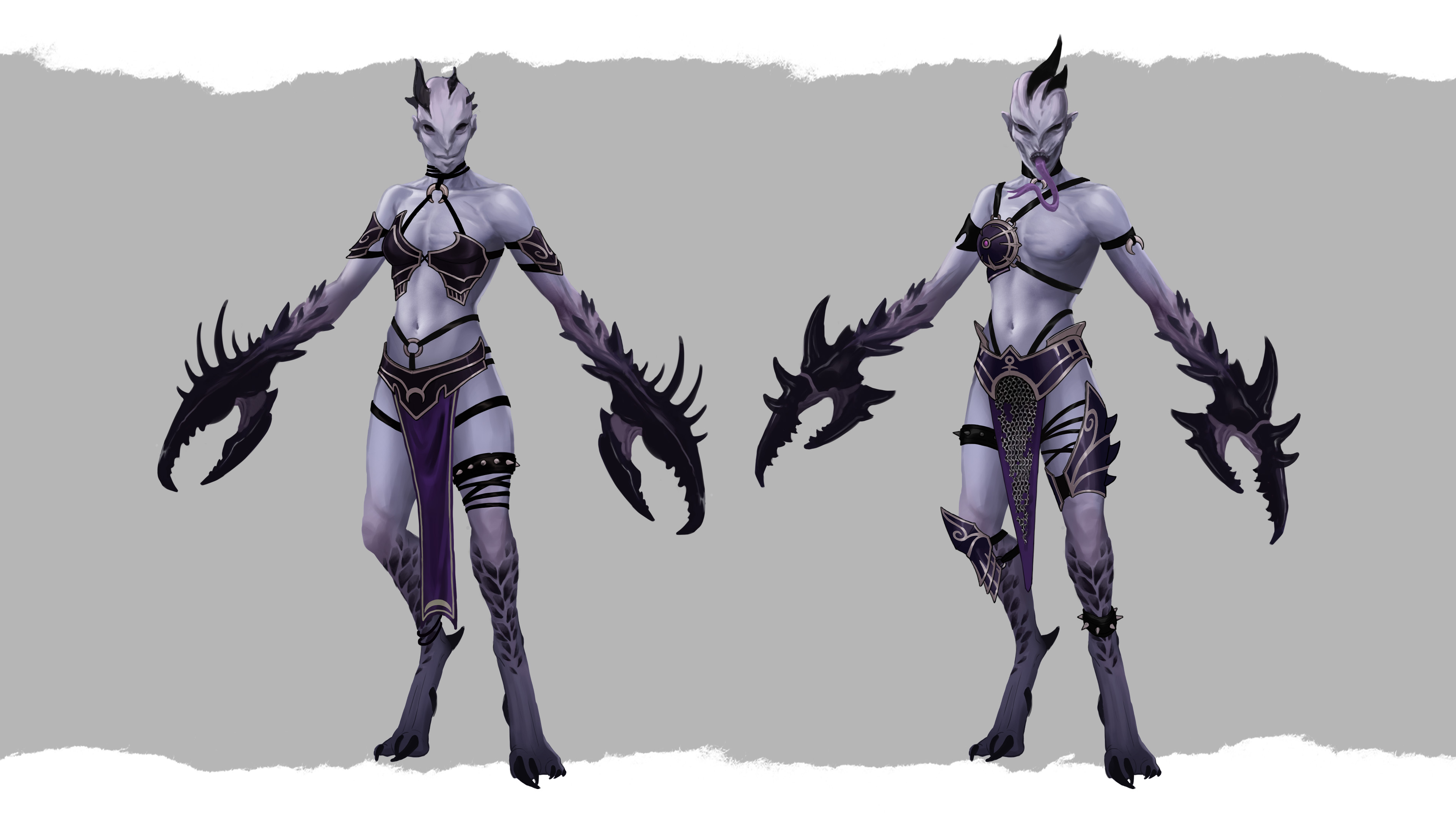 Daemonettes are the hypnotic, dancing footsoldiers of Slaanesh, beguiling senses before shredding flesh with knife-edged claws and are euphoric in the gift of pain. The most numerous of all his servants, they are vicious, merciless fighters who attack with astounding speed and grace.

Although lacking almost any armor, they compliment the Marauders of Slaanesh as an early troop choice through their superior speed, melee output and access to the Devastating Flanker passive ability that grants double charge bonus when attacking the rear or flank of an entity.

Exalted Daemonettes have earned a glance from the Dark Prince and gather souls with which to entertain him for the briefest moment. Merciless, abominable, cruel – no right-thinking creature should find beauty in these hedonists, yet they somehow transfix and beguile onlookers, bending them to their unspeakable will. 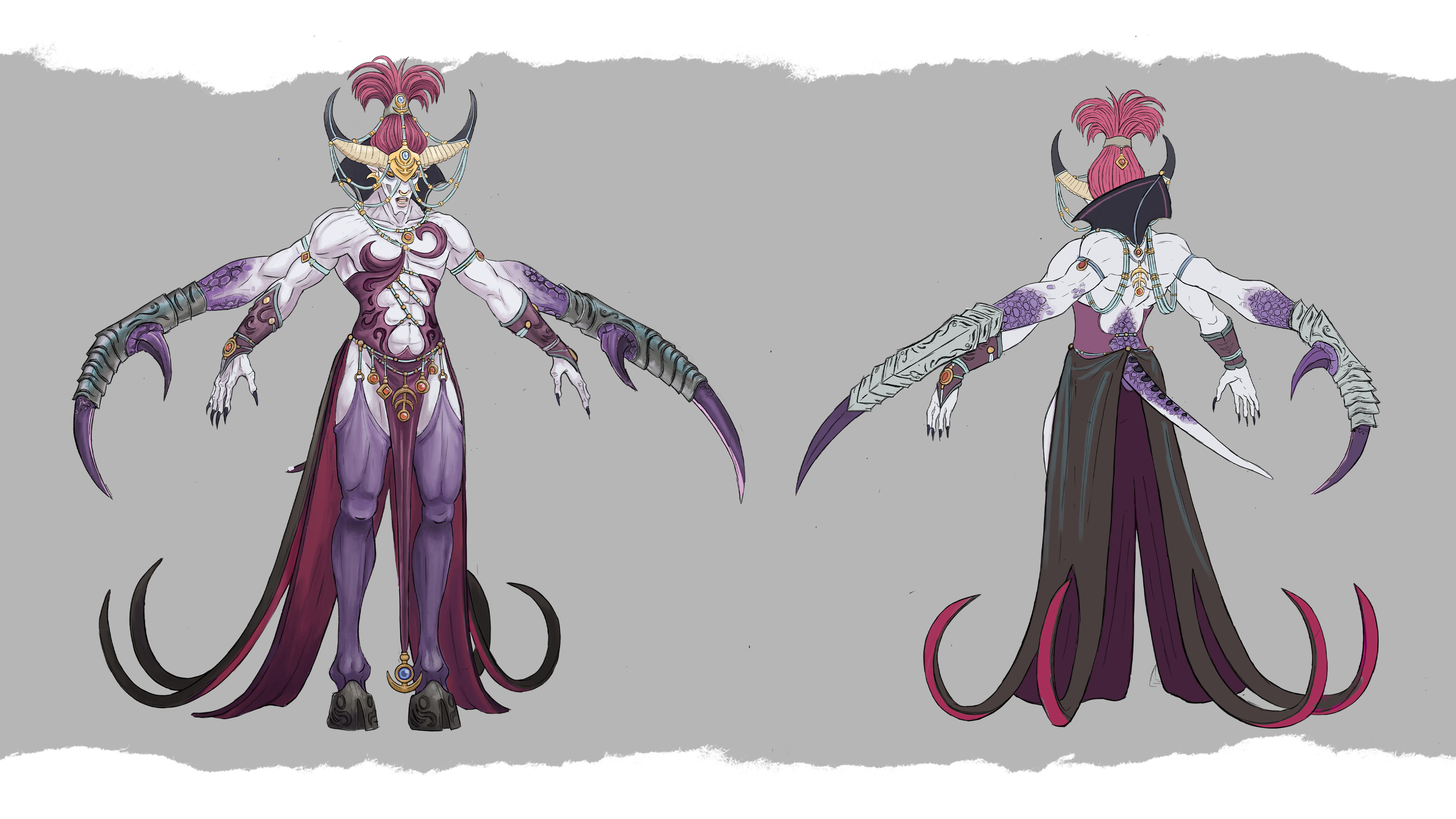 Master of pain, mistress of sensation, slaying its beguiled foes with razor-clawed precision even as they beg for more. Graceful, fast, and utterly deadly, the Keeper of Secrets is the most powerful and dangerous of Slaanesh’s battlefield servants. 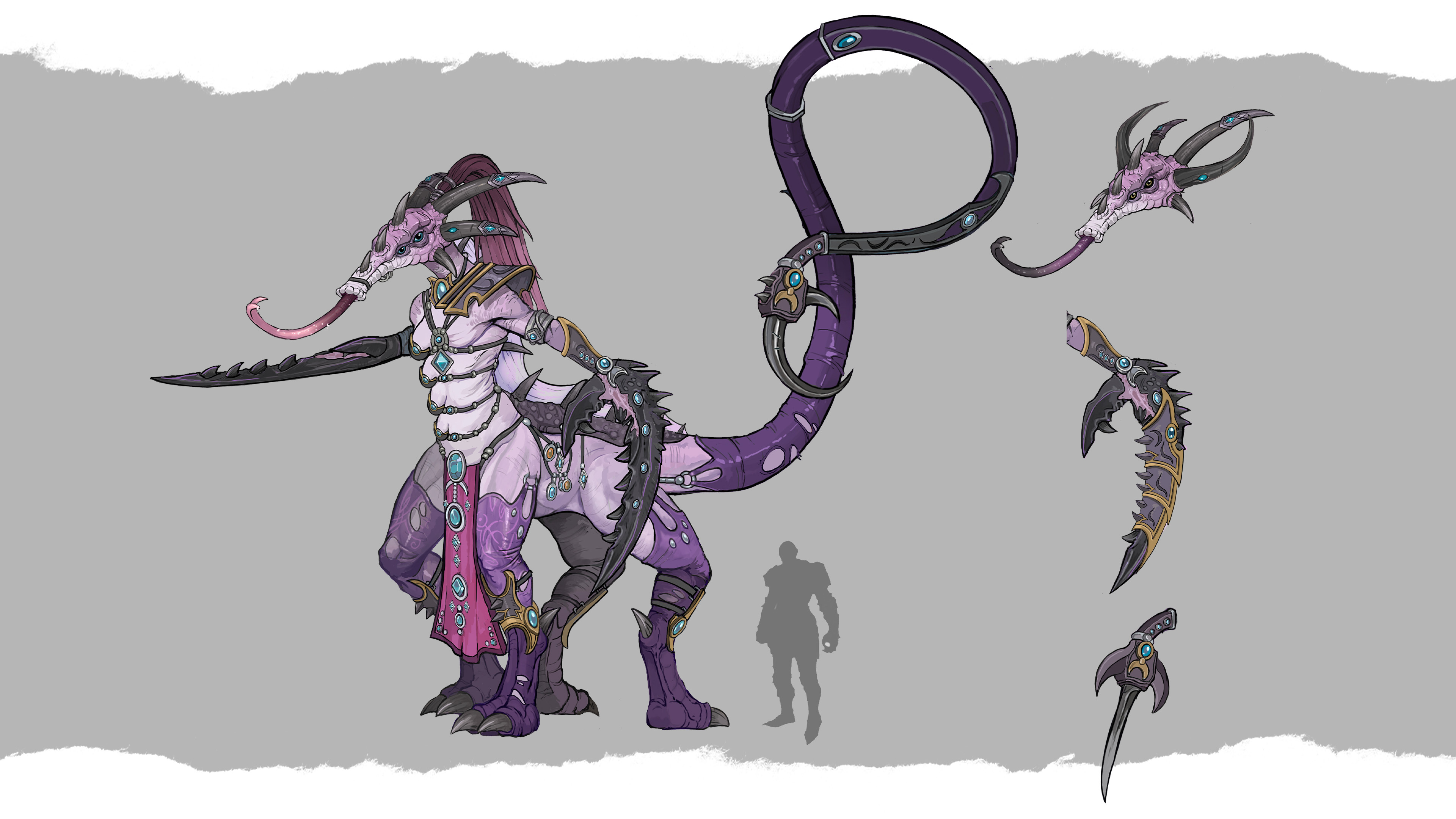 The hunting beasts of Slaanesh, Fiends are scorpion-tailed abominations that ride down victims at nightmarish speeds whilst emitting emit a harsh, trilling call as they race towards their prey. A cloud of dream-inducing musk hangs thick around their body, reducing their foes to a stupor, and sapping them of their will to fight. 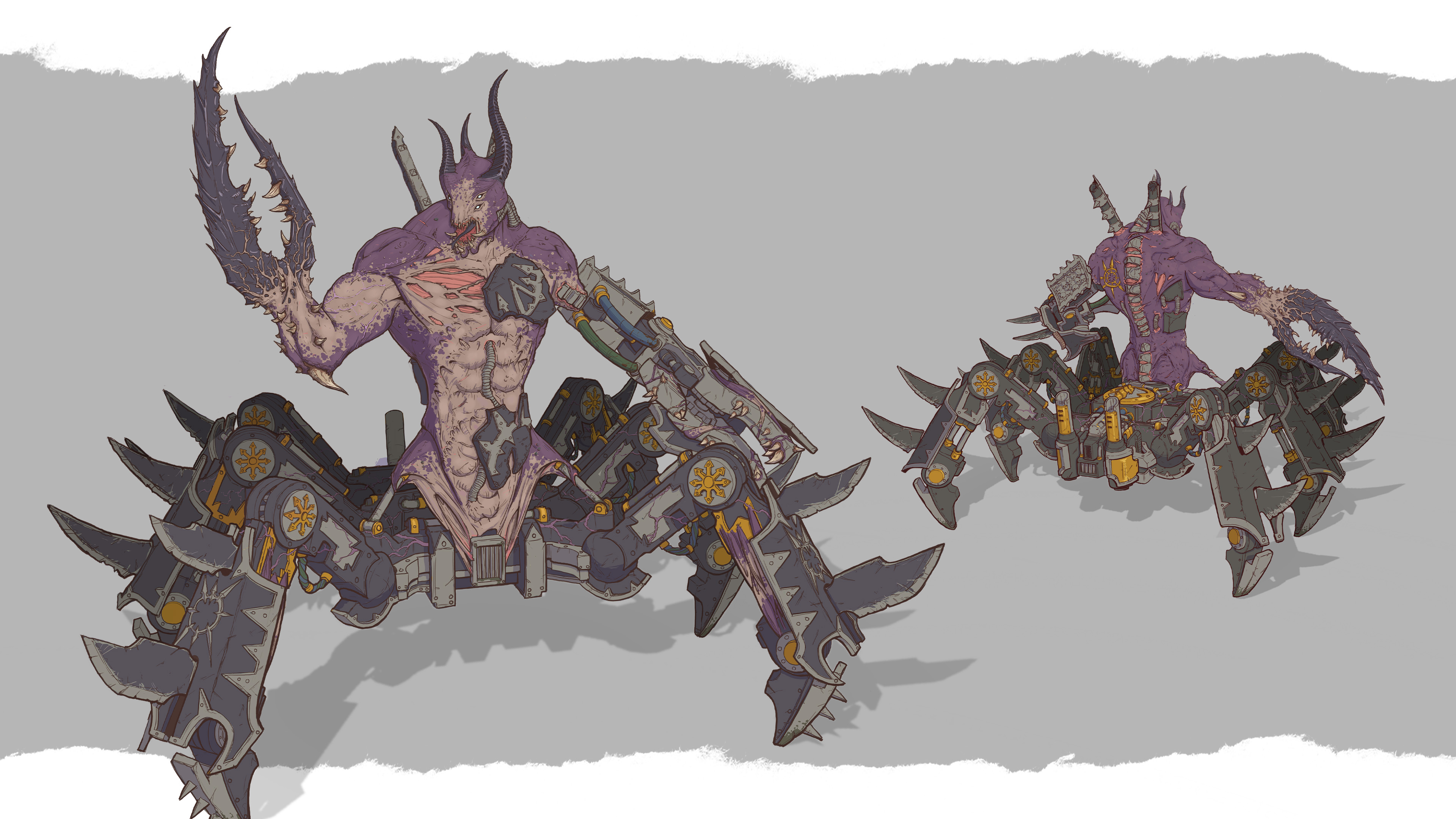 When a Daemon’s physical body is slain, he can surrender his true name to the Forge of Souls. The dark bargain thus sealed, his crippled essence is bound to a mighty Warp-metal hulk. Thus is he reborn as a Soul Grinder. A Soul Grinder’s clanking tread shakes the ground with every step, and it is devilishly fast for a creature its size, able to scuttle swift as a horse’s gallop, or even faster should the scent of battle touch its nostrils. Piston-driven legs thud home with sickening force, crushing to bloody paste those beneath.

A creature visited by too many gifts of the Dark Gods inevitably succumbs to madness and mutation and becomes a Chaos Spawn. A once-­humanoid form that has sprouted and burst into an obscene and monstrous anatomy, mutated almost beyond recognition. The eyes of the original creature peer out, a glint of its former personality barely perceptible amidst the fleshy ruin. Chaos Spawn are creatures of unspeakable horror, their twisted bodies sporting an impossible array of spines, eyes and mouths. 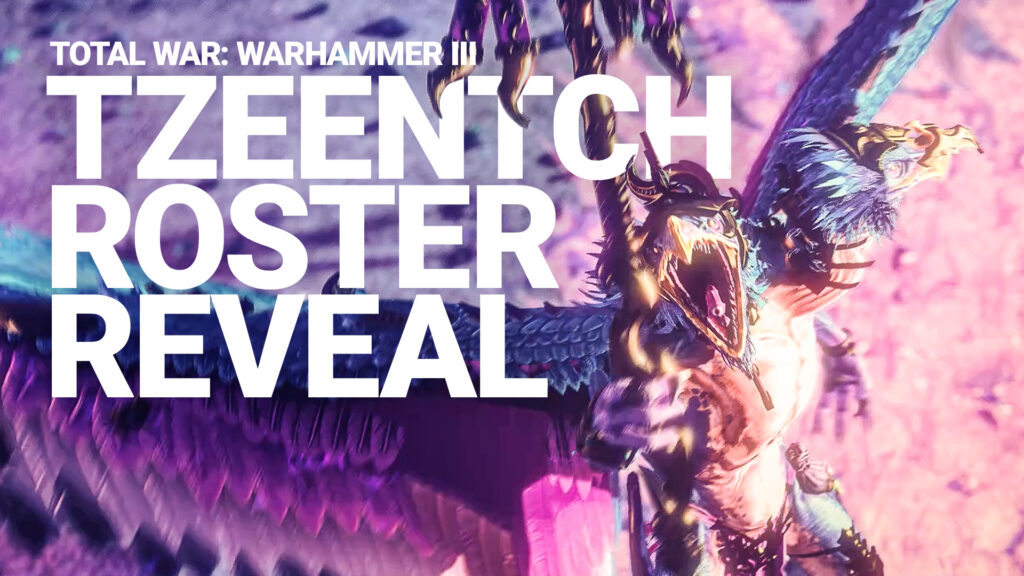 It is time to bring more knowledge into the world and unveil some s... 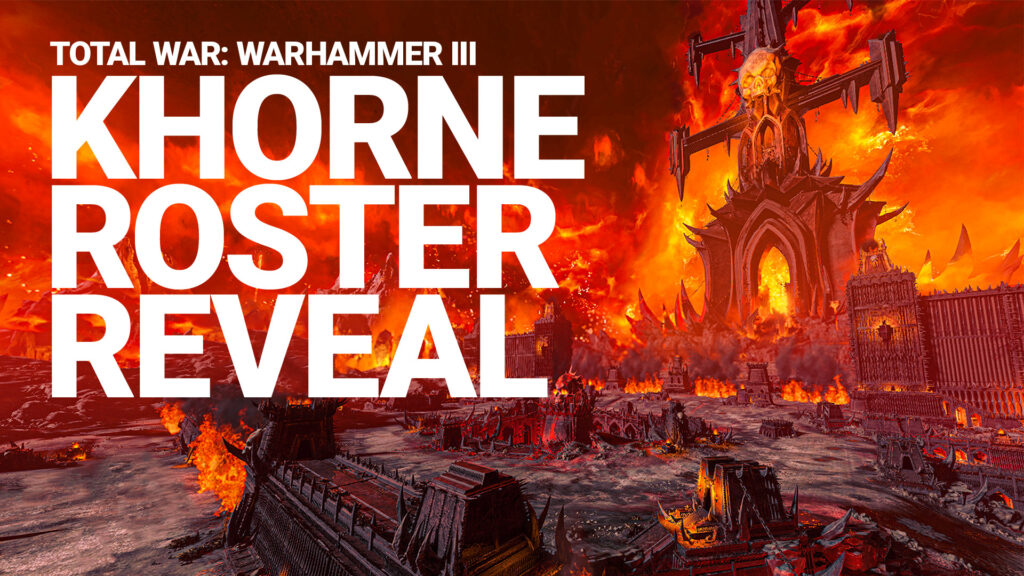 Welcome back to the roster reveals for Total War: Warhammer III. Th... 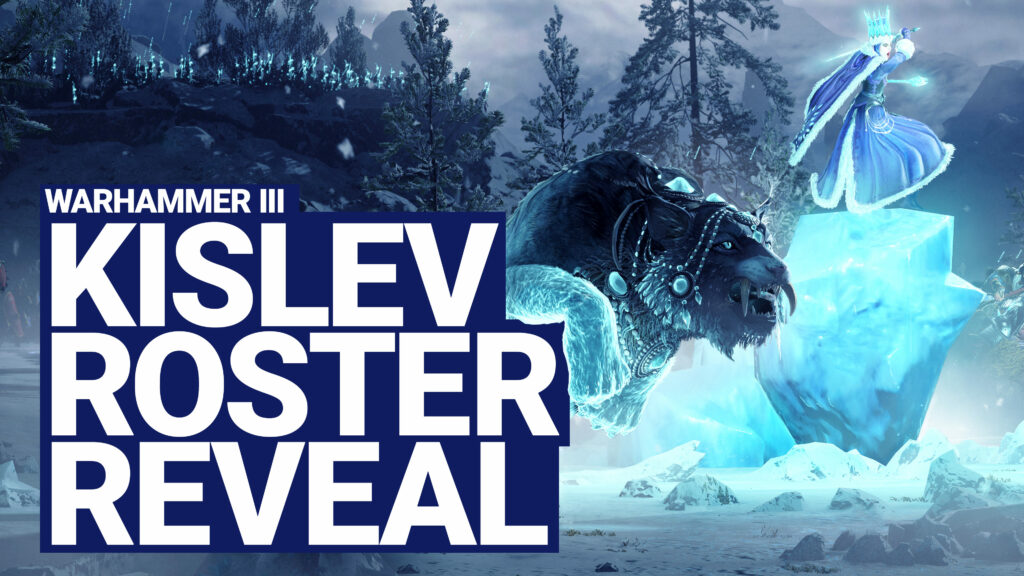 Welcome to the Roster Reveal for Kislev! Unthanked in their endless...