If you want to skip straight to the patch notes, click here

Alongside the release of the highly-anticipated Tomb Kings, a small free update to one of the main Old World races will be added to the game. In this article, Senior Designer Eva Jobse will tell you all about it –

At Creative Assembly, we’re constantly evaluating our old content, and with Mortal Empires it is important to us to evaluate Warhammer 1 factions as well. With the release of Warhammer II, the Vampire Counts saw a massive overhaul to their building tree, the Empire gained some additional buildings and three new technologies, the Greenskins and Wood Elves got new buildings, and most races got access to a few more legendary buildings. The Reprisal Update added the Legendary Lord skills and campaign bonuses from Warhammer 1’s Foundation Update, and gave all Old World lords and heroes access to the desirable immortality skill from Warhammer II. Bretonnia felt a little left out however, so this small update specifically affects them.

One thing that was very noticeable is that the Bretonnian tech tree relies heavily on race-specific upgrades, and all the targets of these technologies were Old World factions only. With the New World adding many new races, it was only fitting to add some technologies specific to these new races. In addition, we noticed that Bretonnia doesn’t have many unit upgrades in the technology tree, making them fall behind a bit when other races start to unlock their general unit upgrades in the middle game. We addressed this issue by adding a whole new section to the end of the tech tree that mostly includes unit upgrades for men-at-arms, archers and knights of all sorts.

Let’s take a look how all of this comes together:

As you can see, the Bretonnian tech tree has been seriously beefed up, with 20 additional technologies added on top of the existing 32. Quite handy with the extended campaign length of Mortal Empires. Five of the new techs focus on the New World races in some way. On the far right side, a whole new section has been added as well, which contains a mix of unit buffs and buffs specific to certain types of buildings. 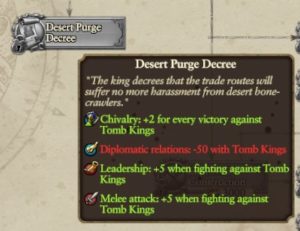 It seems the awakening of the Tomb Kings has not gone unnoticed in fair Bretonnia, and King Louen will not suffer their shenanigans for much longer…

Other technologies are not so specific, but rather improve the stats on various types of units:

…Such as Steel Furnaces, part of a series of techs upgrading all Knight units. 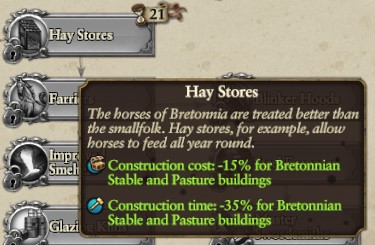 The Hay Stores upgrade, for example, makes it much easier and faster to set up a base of operations in newly conquered lands.

On the character side, we’re very happy that the unique lord skills of the Warhammer II Legendary Lords were well-received. The Reprisal Update added some for most Old World races already, but Bretonnia was one of the factions still left out. As much as we wanted to change a lot of the skill trees to make them unique, we had to be careful here, as moving or changing existing skills will break people’s save-games and make spent skillpoints disappear. So in the end, we decided to add 4 new skills for each of the Bretonnian Legendary Lords on top of what they already have. Each are specific to the areas the characters are famous for. Here’s a quick peek at Louen’s batch:

But that’s not all. One frequent bit of praise for Warhammer II is that there’s legendary buildings almost everywhere, making each province unique. We already added a few of these to the Old World with the release of Mortal Empires, such as a certain famous brewery near Blackfire Pass, the Blood Keep in Nuln and the Fortress of Merovech in Moussilon, but there’s always more we’d like to add. So with this update we added 4 more legendary buildings to the Old World. These are:

Peaks of Parravon (different versions for Bretonnia, Wood Elves and High Elves). Parravon is a mountainous dukedom famous for its Pegasi and other roosts of various flying creatures, and this building provides a boost to these kinds of units.

The Forest of Laurelorn (different versions for Wood Elves, High Elves, Dark Elves, Empire and Bretonnia), in Salzenmund. This ancient enclave of Elves has been holding out in the deep forests of the Empire since the War of the Beard, providing a potential source of warriors for Elf races, or a potential trading asset for the human races.

Oathgold Mine (different versions for Dwarfs, Greenskins and Skaven) in Galbaraz. A source of the purest gold lies deep beneath the Badlands and Dwarfs go to great length to recover it. Other deep-dwelling races may beat them to it, however.

Ruins of Mourkain (different versions for Vampire Counts and a certain Tomb King faction) in Galbaraz. Mourkain was the capital an ancient kingdom that practiced Necromancy, later usurped by what we now know as the the Strigoi vampires. It once occupied most of the Badlands. Some ominous ruined crypts still exist…

We hope you’ll enjoy everything the new release has to offer and will continue working hard to make Mortal Empires the best grand strategy experience out there.

After millennia sleeping beneath the sands of Nehekhara, Settra and the Tomb Kings rise again, to rebuild their empire anew! Those who don’t own the Rise of the Tomb Kings campaign pack will of course encounter them under AI control over the course of their Eye of the Vortex and Mortal Empires campaigns.

Also available is Tretch Craventail, Warhammer II’s first free Legendary Lord. He exemplifies the Skaven qualities of underhandedness, furtiveness and sublime guile, and he occupies a unique starting position up in Naggaroth. You can download him free from Steam’s Warhammer II page extra content listings.

To accompany Settra, Arkhan, Khalida, Khatep and Tretch, we’ve made a number of overhauls to many campaign and battle features in Warhammer II, including many battle and campaign rebalancing changes to improve the Mortal Empires experience.

In addition, Bretonnia has seen an extensive overhaul, with new skills for their Legendary Lords, a plethora of new technologies, and legendary buildings in specific settlements to more closely integrate their lands into Mortal Empires.

This update is applied via Steam auto-update to your Total War: WARHAMMER II client when Rise of the Tomb Kings launches.

You can now place a “mod” folder inside any of these 3 pack file directories:

Placing a .lua script file inside a folder named “mod” in any of the above folders will have it be loaded and the game will attempt to run any function inside the script file that has the same name as the script file.

Creating a script file in this path “script/campaign/wh2_main_great_vortex/mod/mymod.lua” will have this script file be loaded when in the Vortex campaign, the game will then execute a script function inside this file that is called “mymod” if it exists.

Creating a script file in this path “script/campaign/mod/cool_mod.lua” will have this script file be loaded when in any campaign, the game will then execute a script function inside this file that is called “cool_mod” if it exists.