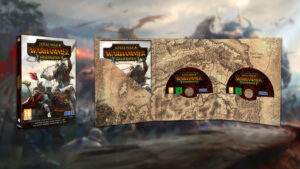 WHERE CAN I GET IT?

Total War: WARHAMMER – Savage Edition is available from select physical retailers in certain territories around the world. Please check with your favourite stockist for details.

Included as part of the Savage Edition is:

What is it? Total War: WARHAMMER – Dark Gods Edition is a limited p...